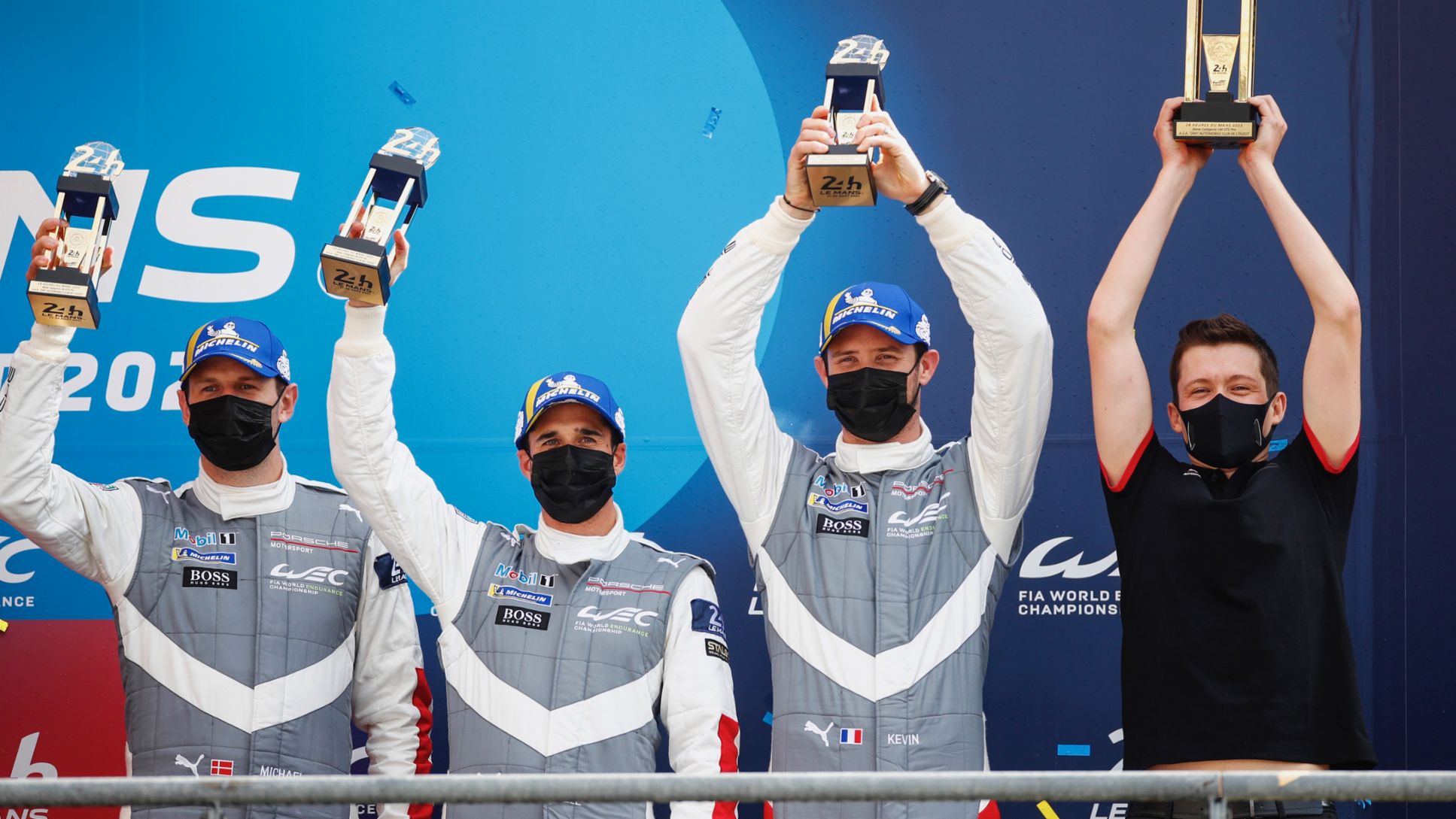 Porsche has secured a podium spot in the fiercely contested GTE-Pro class at the 89th edition of the Le Mans 24-hour race. The works drivers Kévin Estre and Neel Jani as well as Michael Christensen achieved third place in the No. 92 Porsche 911 RSR.

The No. 91 sister car driven by Gianmaria Bruni from Italy, Richard Lietz from Austria and Frenchman Frédéric Makowiecki wrapped up round four of the FIA World Endurance Championship (WEC) in fourth place. The in-house fight between the two works cars for the final podium spot was decided about an hour before the flag dropped: After sliding in the last chicane, the rear of the No. 91 had to undergo repairs and a replacement of the brakes.

“Our team put in a flawless and spirited performance,” explains Fritz Enzinger, Vice President Motorsport. “Unfortunately, we lacked a bit of speed to be able to challenge the competition for class victory. The podium result for our No. 92 car is still a nice reward for the passionate work that our employees have done at the racetrack and back at our headquarters in Weissach. Thank you to everyone who contributed to this achievement.”

#LeMans24 – That’s it!! 89th running of @24hoursofLeMans is over. @PorscheRaces #911RSR No. 92 finishes 3rd in GTE-Pro, one position ahead of sister works car No. 91. Best placed #Porsche in GTE-Am is @ProtonRacing No. 77 in 5th#TeamPorsche @FIAWEC #WEC pic.twitter.com/8Xky8mU0gj

The two nine-eleven from Weissach set a decent pace over long stretches of the French long-distance classic. However, due to bad luck during two safety car phases, a gap of around three minutes from the leader emerged in the first third of the race. It proved impossible to reduce this margin by performance alone over the remaining hours of the 24-hour endurance race. The background to this unfortunate occurrence for the Porsche GT Team is a distinctive feature in the running of the event in the French department of Sarthe.

Unlike other racing events, when an incident occurs at Le Mans, three safety cars are sent out onto the track at the same time. This is due to the sheer length of the circuit at 13.626 kilometres. As the result, the field is divided into three groups. If drivers are behind the same safety car as the leader, they can regain lost ground. Those who follow the second safety vehicle are immediately disadvantaged through no fault of their own, losing at least 90 seconds. This happened to the works team’s two Porsche 911 RSR twice.

“The race wasn’t only difficult, it was also disappointing for us. We had expected to fight for victory,” concludes Alexander Stehlig, Head of Operations FIA WEC. “Despite our good and systematic preparation, we didn’t have the lap-time performance and the top speed we’d hoped for compared to the competition. We’ll now take some time to analyse everything once again with the FIA and ACO to see why we weren’t quite able to match the performance of our opposition in the race.”

Bad luck for the customer teams in the GTE-Pro class

While the two factory-run 911 RSR thrilled spectators with their internal duels for positions three and four, the two customer cars in the GTE-Pro class had already pulled into the pits early. The No. 79 entry from WeatherTech Racing was unable to rejoin the race after an accident involving the American Cooper MacNeil early on Sunday morning. HubAuto Racing’s vehicle, which had taken up the race from pole position, retired with a technical defect shortly after sunrise.

The No. 77 car fielded by Dempsey-Proton Racing with Porsche works driver Matt Campbell (Australia), team owner Christian Ried from Germany and New Zealander Jaxon Evans finished on fifth place as the best 911 RSR in the GTE-Am category. The No. 88 sister car, which had started from pole position in this class, achieved P13. The customer squads Absolut Racing and Herberth Motorsport concluded their Le Mans debut on positions seven and ten. Several other Porsche crews had to throw in the towel early. The two vehicles fielded by Project 1 and the No. 99 car of Proton Competition had to retire. GR Racing lost a lot of ground due to lengthy repairs after an accident and finished the race in 14th.

Michael Christensen (Porsche 911 RSR #92): “We’d hoped for more and took up the race on the assumption that we could fight at the top of the field. Unfortunately, this didn’t happen. Still, the team and drivers did their utmost. Ultimately, a podium spot was the best we could do. That said, to finish on the podium in the GTE-Pro class at Le Mans is no mean feat.”

Richard Lietz (Porsche 911 RSR #91): “If you don’t have any punctures at Le Mans, if the team does a flawless job, if you implement a good strategy and then only finish on third and fourth, then you have to take a good look at things. This result is not good enough. Anyone who watched the race knows that it was a painful 24 hours for us. Now we have to look at why.”

Dries Vanthoor (Porsche 911 RSR #72): “During my morning stint, I was approaching the first corner when suddenly nothing worked. I couldn’t even get back to the pits – that was it. Up until that point we’d already experienced a number of setbacks: a drive-through penalty, a spin and more. All in all, we never had the consistent pace of the other GTE-Pro cars. It’s a shame.”

Laurens Vanthoor (Porsche 911 RSR #79): “We worked really well as a team. The car was good, the balance was right and we were fast. Unfortunately, Cooper had an accident during the night in the chicane before the start-finish straight. The chassis was irreparably damaged and we had to give up early. I enjoyed every single lap and felt really good in the Porsche 911 RSR. These positive experiences are the main things for me.”

Christian Ried (Porsche 911 RSR #77): “I’m super happy – we managed to bring three of our five 911 RSR over the finish line. That was particularly difficult early on in the race with changeable weather conditions. Plus, we had an accident and a technical issue. We have to have another look. Otherwise, everyone did a sterling job. I finished fifth with my car and I’m actually happy with that. My teammates Matt Campbell and Jaxon Evans drove flawless laps despite the difficult conditions and put in a strong performance.”

Andrew Haryanto (Porsche 911 RSR #18): “I’m completely overwhelmed. That was our first outing at Le Mans. Seventh place is definitely very impressive. For me, a dream has just come true. I can hardly believe what we’ve achieved at our first attempt. It’s an unbelievably great result.”

Robert Renauer (Porsche 911 RSR #69): “A wonderful result for the team! We didn’t expect to finish so far up the field. Of course, the events in the race contributed to this, but we reached the chequered flag without any mistakes. I didn’t expect this at our Le Mans debut – especially with some of the special regulations that have to be observed here. Okay, maybe we weren’t the fastest, but we’ve learned a huge amount this weekend. We’d actually be ready to tackle the 24 Hours of Le Mans again right now.” 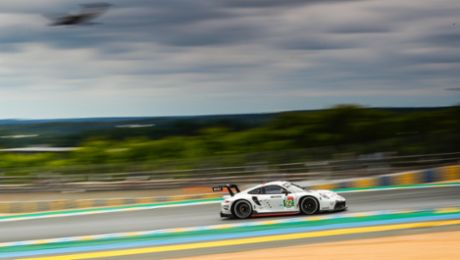 Six Porsche 911 RSR qualify for the Hyperpole at Le Mans

In Hyperpole for the Le Mans 24-hour race, six Porsche 911 RSR in the GTE-Pro and GTE-Am classes get the chance to fight for the top grid spots, while Matt Campbell and Jaxon Evans will start from 12th in the GTE-Am class.

Porsche has won the Monza round of the FIA World Endurance Championship. Kévin Estre from France and Neel Jani from Switzerland crossed the finish line first in the fiercely contested GTE-Pro class at the wheel of the No. 92 Porsche 911 RSR on Italy’s high-speed circuit. 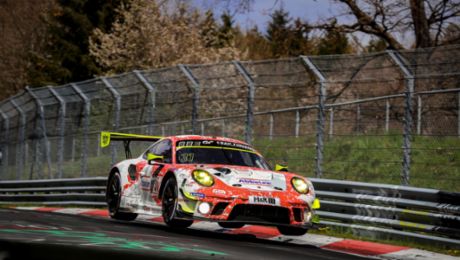 For the best performance on the Nürburgring-Nordschleife, comprehensive vehicle set-up and great driver skill are crucial.