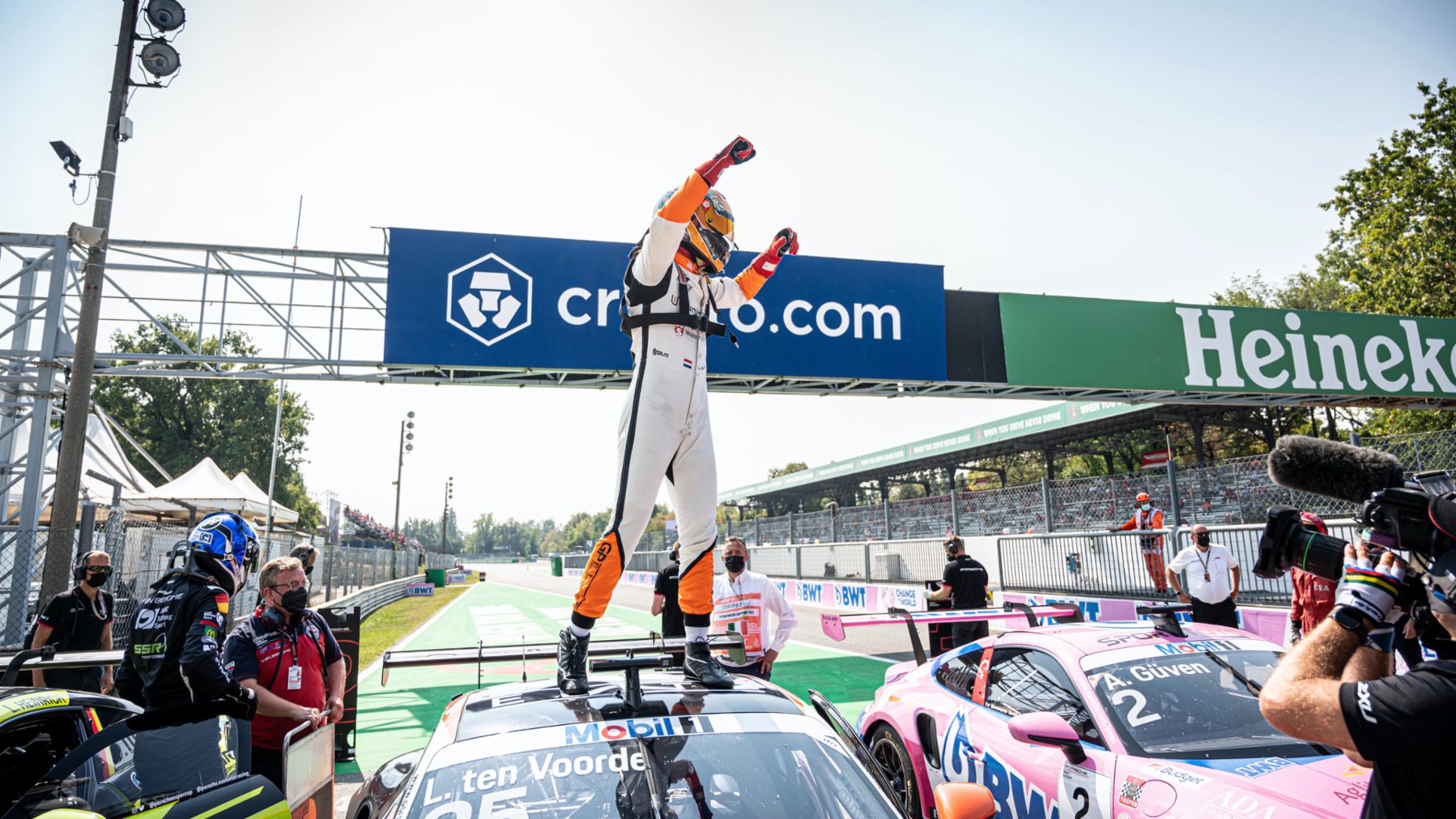 Taking up the race from pole position, the Dutchman from the GP Elite squad claimed a convincing victory at round eight of Porsche’s international one-make cup. Scoring second place, Laurin Heinrich secured the rookie title. Driving for the Nebulus Racing by Huber team, the German only just managed to beat Ayhan-can Güven (BWT Lechner Racing). With third place, the Porsche Junior from Turkey defended his third ranking overall in the series.

“A great race. The duel against Laurin Heinrich over the first few metres was fantas-tic – we both allowed each other enough space. About halfway through the race Do-rian Boccolacci put me under pressure but I think he was a bit too tough on his tyres. This is the perfect conclusion to a great season for me and the best way to thank my GP Elite team,” said Larry ten Voorde, giving a rundown of the season finale.

While ten Voorde maintained a convincing lead to the flag, in his slipstream a battle unfolded between Heinrich and Boccolacci for second place. After two braking errors, the Frenchman from the Martinet by Alméras squad finally had to relinquish his spot to the German, and ultimately to Güven and his compatriot Florian Latorre (CLRT). Heinrich, who had taken up the race from the second grid spot, was ecstatic: “My start was awesome and I was able to attack Larry as we headed into the first chi-cane. But then I pulled back because the rookie title was more important. I also put too much stress on my tyres in Larry’s slipstream. Still, at the halfway point, my tyres were in better condition than Dorian’s and I overtook him again,” stated the 19-year-old from the German city of Würzburg.

#PorscheMobil1Supercup - That was it in the #Supercup for 2021: defending champion @LarrytenVoorde wins the season finale @Autodromo_Monza. The other places:

Porsche Junior Ayhancan Güven was also pleased with his respectable end to a season of mixed fortunes. “Victory at the penultimate round yesterday, P7 to the po-dium today – that was definitely one of my best Supercup races. We’ve made huge improvements as a team in the second half of the season and I’m really proud of that.”

The ProAm category went to Nicolas Misslin from Monaco for the sixth time in a row. The seasoned specialist from the Lechner Racing Middle East team had already claimed an early championship title in this category. Claiming eighth place at the final round of the season, Voorde’s compatriot Max van Splunteren narrowly sealed the overall victory in the team classification for his GP Elite squad. The Dutch team has contested the one-make cup for only two years with the Porsche 911 GT3 Cup.

“An extraordinary season has drawn to a close with two thrilling races. Despite the travel restrictions, we managed to hold eight races. All of the teams and drivers have once again demonstrated a high level of professionalism. We also successfully intro-duced bio-based fuel in the Supercup. We are ready for the next step towards syn-thetic fuel produced with the help of electricity sourced from wind power. Congratula-tions to the champions Larry ten Voorde, Laurin Heinrich, Nicolas Misslin and GP Elite. I hope we’ll see each other again in the 2022 Supercup,” concluded Oliver Schwab, Project Manager Porsche Mobil 1 Supercup.

* placed ahead of Heinrich due to better results from individual races

The title holders of the 2021 Porsche Mobil 1 Supercup

Third place at the penultimate round of the season was enough for Larry ten Voorde to secure the championship title in the Porsche Mobil 1 Supercup for the second time in a row. The Dutch driver from the GP Elite team crossed the finish line on the Formula 1 racetrack in Monza behind the Turkish Porsche Junior Ayhancan Güven from the BWT Lechner Racing squad and Dorian Boccolacci. Driving for the Martinet by Alméras team, the Frenchman has kept the fight in the rookie classification open until the last race at the same venue on Sunday (12 September 2021). The final ranking in the ProAm category of the international one-make cup with the Porsche 911 GT3 Cup has also been decided at the penultimate race: This award went to Nicolas Misslin (Lechner Racing Middle East) from Monaco.

Ten Voorde had taken up the race from second on the grid and immediately attacked Ayhancan Güven in the sprint to the first corner. “He blocked me hard but fair and then he pulled away from me,” stated ten Voorde, describing the early stage of the race. In the eleventh of 15 laps, Boccolacci overtook the title defender. “I didn’t want to take any risks so I let him pass. Jaxon Evans was the only person I had to watch out for,” reported ten Voorde. Before the start, the New Zealander from the Martinet by Alméras squad, who ranks second in the standings, had an excellent chance of catching ten Voorde. However, scoring fourth in today’s race, Evans heads into the final race on Sunday 28 points shy of the leader and is thus out of contention for the title.

Starting from pole position, Ayhancan Güven drove a flawless lights-to-flag race. “We had a few problems in the qualifying, but my team made significant improvements on my car for the race. It was close at the start, but I eventually managed to control the race from the front. Congratulations to Larry. He has had a great season and is a worthy champion,” the winner Güven said in recognition of his Dutch rival’s performance. Thanks to his first win of the season, the Porsche Junior moves up the rankings to third place, which means he still has a chance of claiming the vice-championship title in the final race on Sunday.

The fight for the rookie title will now go down to the wire between Dorian Boccolacci and Germany’s Laurin Heinrich (Nebulus Racing by Huber), who finished Saturday’s race in fifth place. Nicolas Misslin won the ProAm class for the fifth consecutive time and thus claimed the title early.

His hottest rival for the title is Jaxon Evans from the Martinet by Alméras squad, who currently ranks second in the standings. Despite a 25-point gap, the New Zealander definitely has a chance – after all, the 375 kW (510 PS) 911 GT3 Cup cars will be fielded in two races as support to the Italian Grand Prix: the seventh round of the season on Saturday (11 September) and at the eighth on Sunday. This means there are still 50 points to be claimed.

“Last year I won the Supercup race at Monza, so naturally, at least one win is my goal for the coming weekend,” says ten Voorde. This is exactly what Evans plans to prevent. “A lot can happen in motorsport. In any case, I won’t give up. The best chance I have to catch Larry is to win both races,” says the Kiwi, who crossed the finish line in fifth at the 2020 season finale in Monza.

#PorscheMobil1Supercup - This weekend, fifty points are up for grabs at the season finale of the @PorscheSupercup. The international one-make cup with the #Porsche #911GT3Cup holds two races as support to the Italian Grand Prix in #Monza (10 - 12 September 2021) pic.twitter.com/8UPatkhw4C

Theoretically, four other drivers still hold title aspirations. They include the Germans Laurin Heinrich and Leon Köhler (both Nebulus Racing by Huber), who celebrated an impressive one-two victory in Zandvoort last weekend, as well as Porsche Junior Ayhancan Güven from Turkey and Dylan Pereira from Luxembourg (both BWT Lechner Racing). Local fans will be pinning their hopes on the home team Dinamic Motorsport, whose driver Simone Laquinta recently achieved his best Supercup result to date in Zandvoort, when he came third.

The titles in the rookie, ProAm and team classifications of the Porsche Mobil 1 Supercup are also still up for grabs. Spearheading the newcomers is Germany’s Laurin Heinrich, winner of the previous Supercup race in Zandvoort. He holds a 24-point lead over Frenchman Dorian Boccolacci (Martinet by Alméras). In the ProAm class, Nicolas Misslin (Lechner Racing Middle East) from Monaco heads the leaderboard, with pursuers Philipp Sager (Dinamic Motorsport) from Austria and defending champion Roar Lindland (Nebulus Racing by Huber) from Norway chasing him. In the team ranking, four squads still have a shot at first place overall: the Dutch team GP Elite, BWT Lechner Racing from Austria, Nebulus Racing by Huber from Germany and the French outfit Martinet by Alméras.

The grid line-up for both Supercup races will be determined in a single qualifying session. For the seventh round of the season, the drivers’ fastest lap will count. For the final on Sunday, the second-best times will produce the starting order, possibly completely different.

“An exciting Supercup season heads into an extraordinary finale with a doubleheader event in Monza. After our debut outing on the Circuit Zandvoort last weekend, drivers and teams must again prepare for a new challenge. I’m curious to see who can do this best,” says Oliver Schwab, Project Manager Porsche Mobil 1 Supercup, looking forward to the grand final of the international one-make cup with the Porsche 911 GT3 Cup.

Porsche and ExxonMobil are implementing a two-stage strategy in the introduction of renewable fuels in the Porsche Mobil 1 Supercup. This season, the racing vehicles will be powered by a blend of bio-based fuel. This advanced biofuel is obtained from food waste products. Additional components are blended in to enable the required fuel properties and combustion behaviour. In 2022, the next step will be to introduce synthetically manufactured eFuel. This Esso Renewable Racing Fuel is anticipated to reduce greenhouse gas emissions by up to 85 per cent, when blended to current market fuel standards for today’s passenger vehicles(1). The partnership between Porsche and ExxonMobil aims to gain valuable experiences to find pathways toward potential future consumer adoption. 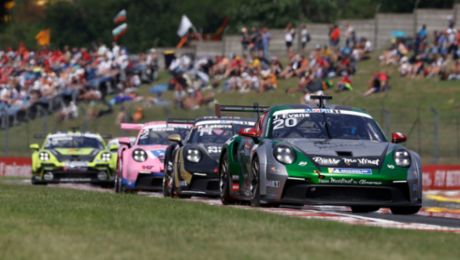