Launch Control the 911 experience of a lifetime

What does it feel like driving a Porsche 911 Turbo S flat-out at Sydney Airport? Read on to find out what it felt like from the driver’s seat.

The roar of jet engines is not something that normally accompanies you when stepping into a Porsche 911.

But these aren’t normal times. And this isn’t a normal day.

For today this 2.2-kilometre strip of bitumen is exclusive to Porsche. The ultimate experience in the ultimate 911.

Sydney Airport is the location to showcase the new pinnacle of the 911 family, the 911 Turbo S type 992.

Porsche calls it Launch Control. Others consider it the most ambitious drive program Porsche has ever engineered in Australia.

The result of months of planning, Launch Control started in the boardroom of Porsche Centre Sydney South, where the idea of unleashing Porsche’s fastest accelerating car on a runway getting a fraction of its regular traffic was born.

In the gloom of the world-changing COVID-19 pandemic it’s a rare bright light rightly being described as a once in a lifetime event. It’s unlikely Sydney Airport will be as underutilised again.

Our first run is in the relative serenity of a Cayenne with an instructor pointing out key markers, including where to brake and what taxiway to use for the much slower return journey. Up and back is a five-kilometre loop.

Porsche Track Experience instructors such as Bathurst 1000 winner Luke Youlden and multiple Australia rally champion Cody Crocker can just about call a corner apex or braking marker in their sleep, but the thrill of an open runway has them talking with an aviation twang.

“Tango 4” is apparently the taxiway we’re looking for, a gentle curve to the right before tucking harder to turn back towards the terminals.

Even at a sedate 100km/h there’s a deep growling rumble as the Cayenne sidles down the 45-metre-wide expanse of asphalt. While there’s barely a dip or hump, the thousands of grooves to clear water make for an eerie aural accompaniment.

The persistent hum sounds like all-terrain tyres on a heavy duty off-roader, not the sort of thing you expect from a Porsche capable of 250km/h-plus autobahn blasts. But the Cayennes are the entrée to one heck of a main course: the 911 Turbo S.

Black, white and blue 911s are assembled at the northern end. From there you can’t see the Botany Bay end, just a distant shimmer as the road feeds into the horizon.

Even from outside, the first take off is a reminder of the brutality of a Turbo S at its angriest. In 992 guise it’s faster than ever, the 0-100km/h dash officially 2.7 seconds. Sending 478kW and 800Nm to all four wheels briefly overcomes 315mm of sticky Pirelli P Zero.

A purposeful rear-end squat is countered up front as more air appears under the curvaceous wheel arches, physics having its say on a car that is built for speed.

“These aren’t normal times. And this isn’t a normal day."

From a stationary vantage point it’s clear the Turbo S is piling on the pace quickly.

Those rear haunches remain squatting and hunched as it continues its blistering journey down a strip of bitumen more used to 737s and Jumbos.

As the car surges towards the horizon the rear-end starts to blur into a heat haze. It’s like watching a fighter jet at an air show disappear into a dot before eventually dissolving into the background.

The only inkling there’s still a car gathering pace is the intoxicating growl, partly from the thrusting exhaust expelling air and partly the tyres rumbling over runway ripples.

But 911s have long been about the experience behind the wheel, not sitting on the sidelines. Sliding behind the wheel is familiar to any in a 992, albeit with ‘Turbo S’ badging to reinforce its status at the top of the 911 family.

The acceleration is next-level. Nothing prepares you for the thump of a Turbo S launch control start. These are serious G-forces and the initial acceleration is brutal. It’s enough to require some extra thought and focus as your eyes adjust to forces they’re not usually asked to deal with.

A bit over two seconds has the speedo into triple digits. The eight-speed PDK keeps the twin-turbo horizontally-opposed six-cylinder engine in its sweet spot.

Only beyond that does the ferocious acceleration wane, aerodynamic drag slowing the party.

Even through a helmet, the rush of wind and roar of the tyres makes conversations with an instructor a shout rather than a chat.

Seeing the speedo tickle 300km/h and realising the Turbo S is still building pace is a reminder of the potential of the 992 Turbo S.

This is the speed at which a big passenger jet would take off, settling into the climb, no consideration given to the water below.

But we’ve got to stop as well. The scenery is flicking past at 83 metres per second, the end of the runway now in focus.

While Launch Control is mostly about straight line performance, the need to wipe off big speed tests another classic Porsche trait: brakes. Big carbon ceramic stoppers (Porsche Ceramic Composite Brakes) fulfil their role beautifully, the wide-bodied 911 dipping its nose and decelerating with similar intent to the pace that got us here.

The entire exercise has taken something like 30 seconds. But it’s 30 seconds unlikely to be replicated anytime soon.

Watching a plane bank on take-off during our slow ‘taxi’ back is a reminder of just how unique Porsche Launch Control has been.

In conclusion it was... 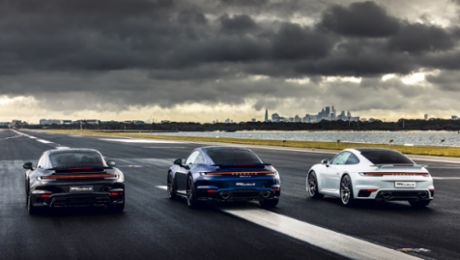