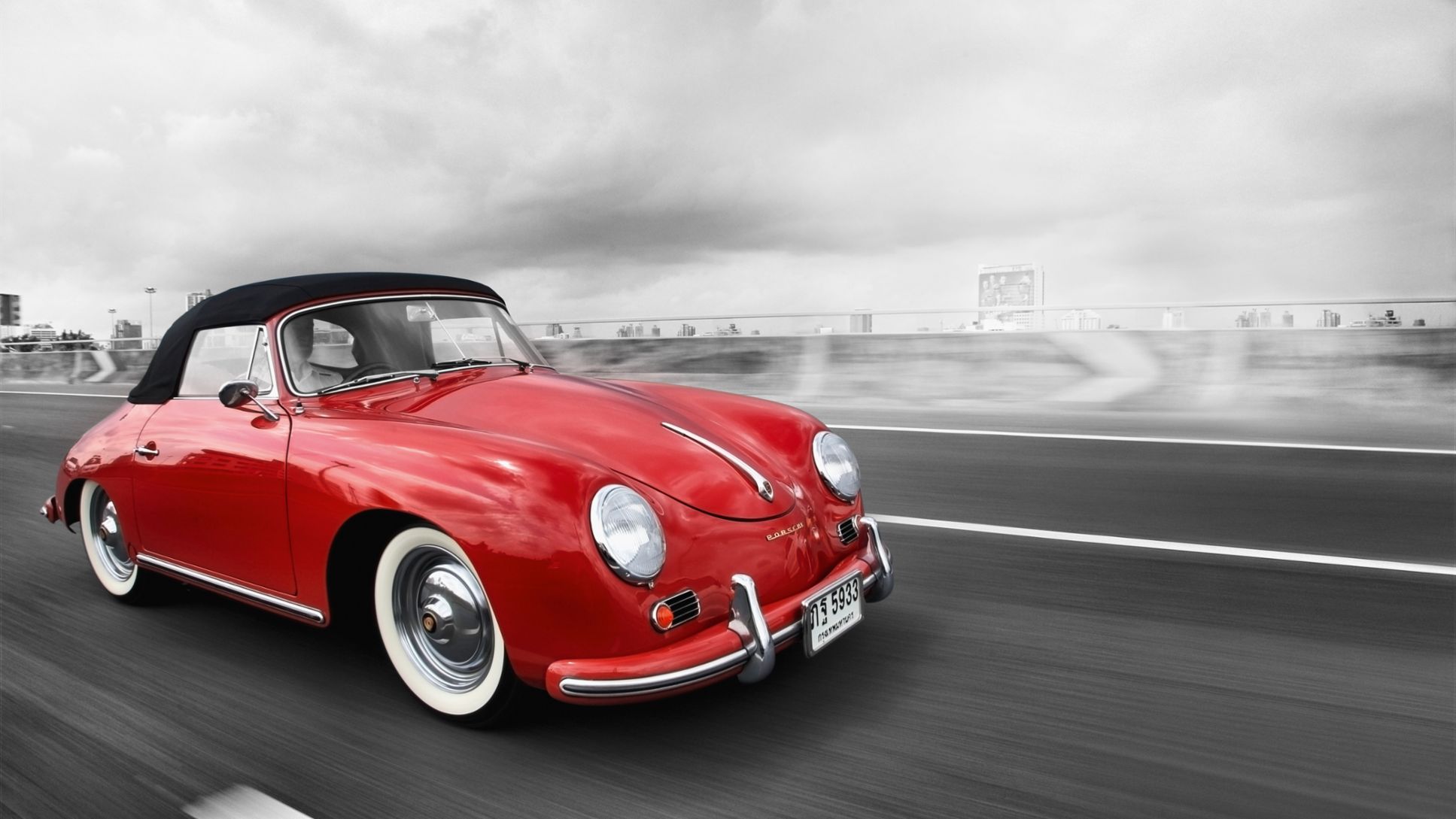 Classic cars in the best hands: Porsche is expanding its services for classic models worldwide. We take the opportunity to visit Bangkok, home to one of the first Porsche Classic Partners. Our ride, perfectly suited for the occasion: a 356 Cabriolet.

The thick photo album on the passenger seat is a very special logbook that accompanies Sawasdi Horrungruang through the streets of Thailand. A birthday present from his daughter, the book lists an astonishing 145 classic cars—and they’re all his. “Yes, I’m a collector,” concedes the businessman with a smile as he slides into his favorite: a red 356 A Cabriolet. Behind the wheel, he casually offers up another fact about himself: “I also collect extraordinary watches.” It’s always a question of style. And a question of appropriate movement, for timepieces as well as historic automobiles.

Horrungruang’s cars, after all, are no exhibition pieces posing gracefully in air-conditioned museums. He still drives them regularly through the streets of Bangkok. Early in the morning, for example, he likes to drive one of his convertibles across the pulsating metropolis of eight million inhabitants to his office. Today, however, he’s glad to take a detour to the Porsche Center
Bangkok.

He’s known as Thailand’s steel king, but Horrungruang is an entrepreneurial polymath, with business interests ranging from agriculture, real estate, and infrastructure to the energy sector. His versatility is reflected not least in his exceptional pool of vehicles. He is especially taken with models from the 1950s and 1960s—for Horrungruang the “golden age.”

The desk in his office is made from a car radiator from that time, and his 356 Cabriolet is a 1958 vintage. “I’ve never bought a new car,” says Horrungruang as we drive. “No new car can give me that special feeling I get from driving a classic car.” But classic cars require both special care and expert maintenance, particularly when exposed to the occasionally extreme climatic conditions of Southeast Asia. The Porsche Center Bangkok is the right address for both. In recent years, the Porsche Center has completely restored ten classic models. Horrungruang’s 356—one of just three officially imported into Thailand—was one of them.

The passion for Porsche classic cars knows no borders

That kind of expertise and experience does not go unnoticed. So it’s no surprise that the Porsche Center Bangkok became one of the first certified Porsche Classic Partners worldwide. By 2018, the company aims to certify one hundred partners across the globe. The passion for Porsche classic cars, after all, knows no borders.

To fulfill the requirements of the hard-won certification, the Porsche Center Bangkok had to demonstrate, among other things, its product knowledge with regard to classic Porsche models. Moreover, maintenance of the early model years up to the 996 model line of the 911 and the Boxster Type 986 requires special equipment and tools. The workshop and service staff completed special training courses.

“Eight of our workshop technicians have already attained the highest-level certification as ‘Zertifizierter Porsche Techniker,’ the Gold level,” notes Assistant to the Chairman Peter Rohwer. And three of them are consummate classic-car specialists. He himself has worked for Porsche since 1963; he started out as a mechanic in Stuttgart.

Today, in Bangkok, he’s an eminence when it comes to restoring engines. Because the maintenance of older cars involves special requirements, those tasks are generally taken on by Gold-certified technicians. To optimize restoration work, long-term plans for the Porsche Center Bangkok include setting up a special workshop area just for classic cars.

For the visit by Horrungruang’s 356, two minor repairs are on the agenda: the speedometer is on the fritz, and there’s a problem with the adjustment of the driver’s seat. Routine matters, but the classic car will also go through the same seven-step customer service process as the modern models. All classic cars are put up on the hoist, for starters. Customer service managers painstakingly inspect the red cabriolet before an individual maintenance plan is created.

One of the requisite features of any certified Porsche Classic Partner is a display area in the showroom specially designated for classic models—the Classic Corner. In Bangkok, the Corner boasts a 911 Turbo “Slant Nose” from the early 1980s and a 911 Carrera RS 3.0 from 1974. It is the ideal place to talk to classic-car customers, and those who would like to join their ranks. “The interests and needs are different in each case,” Rohwer explains. He speaks from experience.

One time—unannounced—a flatbed truck with a 1972 911 Targa pulled up out front. The only problem: the Porsche had no engine. That only arrived in a pickup a few days later, but was itself from a 1970 model. Mounting it was no problem from a technical standpoint, but it presented a dilemma all the same. The principle for classic Porsche cars is that only original parts should be used. “Original looks the best, keeps the longest, and retains its value,” emphasizes Rohwer.

Because the original state is a decisive criterion for classic cars, the Porsche Center Bangkok puts on events in which customers’ Porsches are subjected to a 33-point checklist. The original cars that pass the test are then presented with the Classic Card. “In the first event of this type, eighty customers took part and seventy of them drove off with Classic Cards,” says a clearly delighted Rohwer.

Next door in the body shop, another of Sawasdi Horrungruang’s 356s is on the blocks and waiting for its wheels. The 1955 model is in the final stages of restoration. Just finding the right steering wheel took two years. Everything in the car is original—with one exception: Rohwer points to the air-conditioning compressor under the hood. “A special production for Mr. Horrungruang. We had to find a solution to keep the compressor from choking off the engine when idling.” So, while the driver gets air-conditioning, the car itself has to withstand the sweltering heat of Bangkok without modern extras.

With its average annual temperature of 28 degrees Celsius, Bangkok is regarded as one of the hottest cities in the world. Its traffic jams and sometimes flooded streets can make things even more arduous. “But a Porsche is built to run anywhere in the world, even in old age,” says Peter Rohwer. The 356 Cabriolet is already rolling back into traffic.

Mr. Frenkel, what’s the idea behind the Porsche Classic Partners?

We’re expanding the existing expertise in classic cars at Porsche Centers worldwide and giving the 680,000 owners of classic Porsches a clear orien­tation as to where they can obtain the best service: at their nearest Porsche Classic Partner. The desire for local service has grown significantly in recent years.

And is the range of services the same worldwide?

Yes, whether it’s the supply of some 52,000 original parts, technical literature, maintenance and repair, or the restoration of a vehicle. Our specific qualification and certification measures for workshop and service technicians guarantee the same level of quality worldwide.

Where are Porsche Classic Partners located and where will new ones be added in the near future?

By the end of 2014, we had already certified seven Classic Partners, four in Germany and one each in France, Hungary, and Thailand. In early 2015, ten more will be added, including in the United States, South America, and Asia. The services are around the world in equal measure. An overview of all partners can be found at www.porsche.com/classic

Text and photos by Tony Watts