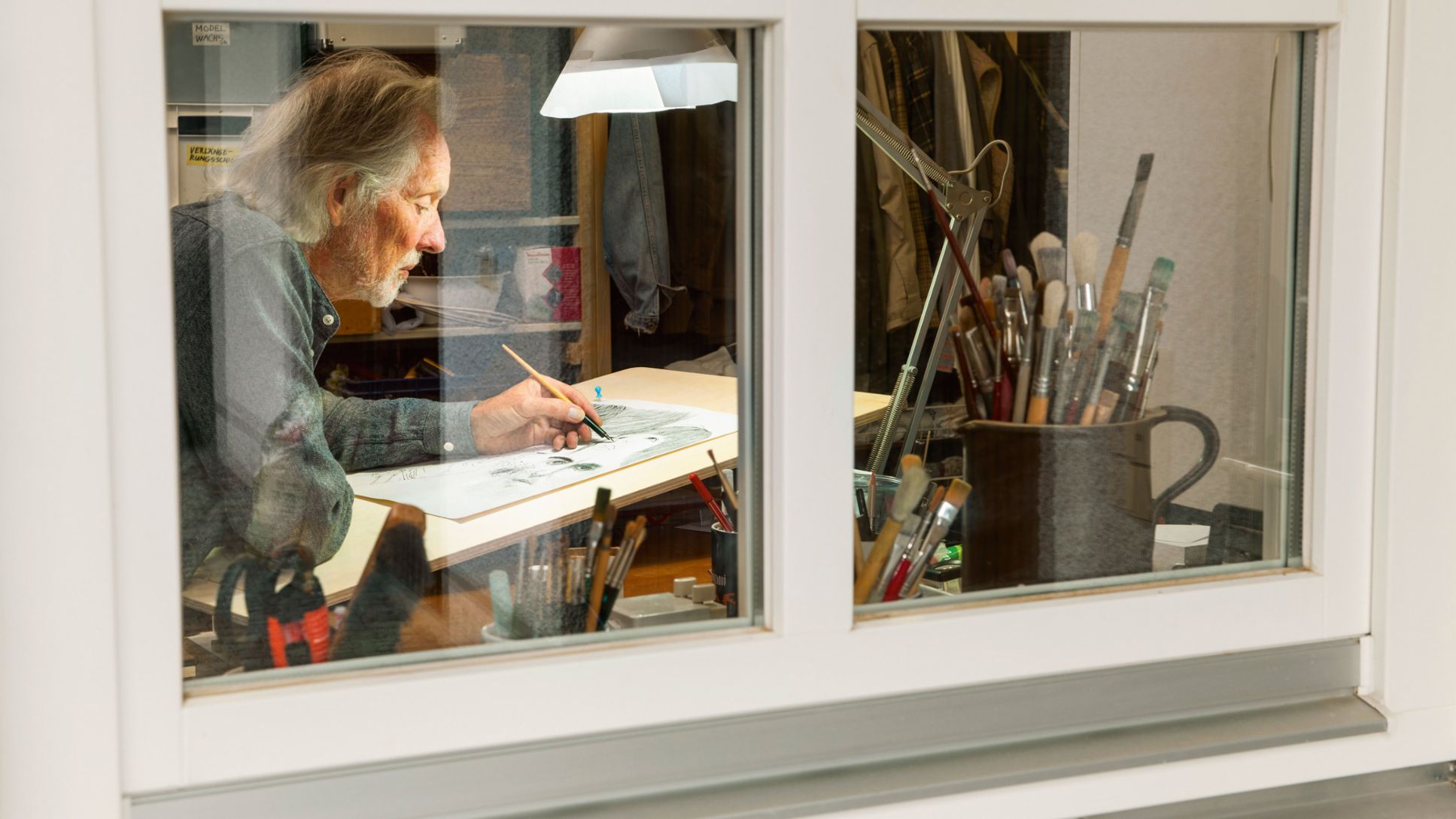 Klaus Voormann has dedicated his life to two forms of art: music and graphic design. They have come together at a key point in his life—to superb effect. How he started to drive Porsche.

It’s not an apartment, but rather a collection of small rooms tucked under the roof of an apartment building in London’s Parliament Hill area—just large enough for the bathtub to fit in the kitchen. Next to the tub stands a small table with a sketchbook, a quill, ink, and scissors. It’s the year 1963. Klaus Voormann has moved from Hamburg to London, in the wake of the Beatles. He had become friends with John, Paul, George, and Ringo when they were all in Hamburg.

Three years later, Voormann, a gifted bass player and highly talented graphic designer, is lying in the tub after a long night, as the water starts to cool. The Beatles have become world-famous stars and see their old friend Klaus only rarely. When the phone rings, Voormann doesn’t know it could very well be the most important call of his life. His girlfriend Christine hands him the receiver and says, “John somebody wants to talk with you.” Voormann picks it up and asks, “John who?”

And so legends are born

“John somebody” doesn’t waste any time. “It’s me, you silly bastard!” The voice, and the rough tone of affection, could only come from Lennon. He has a question. “Would you have an idea for the cover of our new album? You know, the cover for this band that no one knows, and especially not our old friend Klaus.” Voormann thinks for a minute. Yes, he has an idea. And what an idea it is.

This phone call will ultimately lead not only to a Beatles album that radically breaks with the past, but also to an album cover that rewrites design history. Revolver will also give visual form to a new kind of pop culture.

A love of music and a gift for graphic design

Klaus Voormann, the son of a doctor, left his native Berlin for Hamburg shortly before his twentieth birthday to study graphic design. He brought his first passion—a love of music—along with him. Piano lessons, followed by intensive study of classical guitar, laid the foundation for a significant musical career. His interest in jazz and musicians such as Miles Davis and Sonny Rollins led him to the saxophone.

At the same time, his gift for graphic design turned out to be a good way to earn money. At the young age of twenty, he designed an entire series of covers for a major Hamburg record label. This talent would ultimately result in more than a hundred album covers—with Revolver as the highlight, an iconic piece of design. But Voormann is also well known for his musical contributions to solo albums by Ringo Starr and George Harrison, as well as his drawings on covers for the Bee Gees and Gary Wright.

A combination of music and visual arts

Voormann’s career is unusual in its combination of music and visual arts. The ability to design record covers has little or nothing to do with a talent for music. Voormann himself was probably unaware of his musical gift for some time—until he started playing bass in the early 1960s in London, where a musical revolution was under way. And Voormann could play. “Thanks to the training on the Spanish guitar, I was quite good,” he says, which is saying a lot given his reserved manner. In early 1966 he joined Manfred Mann’s band, which produced a number of hits over the next several years.

It was right at this stage of reorientation that the call came from the Beatles. “I had some pretty rough weeks after that—very long days of work, too many cigarettes, not enough sleep. The day after John called I went to EMI Studios. The band played me their tapes. I was speechless—this was not the music I had heard in Hamburg. It wasn’t the music on the first Beatles albums that had made their fans go crazy.”

Voormann won two Grammy Awards, but he has a low-key nature

Experts see Revolver as a leading example of musical innovation. The album features progressive psychedelic sounds and combines them with experimental studio techniques. The result is a mélange of acoustic worlds never heard before. The album sold like mad from the start. Revolver—the name refers not to the gun but to the turntable—became the logical prelude to Sgt. Pepper’s Lonely Hearts Club Band in 1967, the next step in the Fab Four’s creation of pure concept albums.

What’s fascinating about Voormann is his low-key nature. Given his colorful past and musical experience, he would have every reason to seek the limelight. He won two Grammy Awards, for example: one in 1967 for the Revolver cover and another in 1973 for his contribution to the legendary live album Concert for Bangladesh with George Harrison. But these Oscars of the music industry lie in a small brown cardboard box, with “Grammy” scrawled on the side with a felt-tip pen. A job well done, but now put to rest.

Only if asked does he talk about his cult appearances with John Lennon and Yoko Ono’s Plastic Ono Band, or with Ringo Starr and George Harrison. Voormann lives what seems to be a very tranquil life at his home in an old farmhouse south of Munich. He interrupts the interview perfectly naturally when passersby stop to ask whether they can purchase a drawing from him. “Do stop by again tomorrow, I’ll have more time for you then,” he tells them.

No one would think that this slender man with piercing eyes still meets regularly with Paul McCartney and makes music with Ringo Starr. Has fame gone to his head? Not in the least. That also explains why  his home contains few, if any, status symbols. What about his passion for cars?

“My brother and I built two parallel racetracks with banked curves on a slope in our yard as kids. We held races for our cars there, which were usually won by my silver Porsche.” He later acquired a large model Porsche with steerable front wheels, which he used to practice parallel parking. He didn’t have nearly enough money for a high-class car. As he explains, “You can hardly imagine how poorly musicians were paid back then if they weren’t performing on the level of the Beatles—even the Rolling Stones were exploited for years by their former managers.”

In 1972, Voormann played bass for Ringo Starr’s third album, which was later released under the title Ringo. As he recalls, “Ringo rented a car for me. It’s impossible to do anything in Los Angeles without a car, so he got me a 911 Targa—after all,California is the perfect place for a convertible.” Starr and Voormann lived in a bungalow at the Beverly Hills Hotel, drove the Porsche to the studio, and produced the most successful and best-selling album by the Beatles’ percussionist.

Voormann’s hair is still as long as it was in the laid-back 1970s—except that now it is gray. A sign of years gone by, which otherwise have hardly left a trace on the essence of this graphic designer and musician. His strong voice still has an unmistakable northern German accent, with an occasional English phrase used here and there. He is the picture of energy and joy in his studio on Lake Starnberg. The room is small, but full of history. Cardboard cartons are labeled “Twiggy” (whom he drew for Vogue magazine), “Ringo,” “Manfred Mann,” “George,” and so on. He calls himself a sideman, and his archives are equally unpretentious. He is unsentimental, with a contented approach to the future. He has just completed a graphic novel on how the Revolver cover was made. And his drawings are now appearing as a book.

His daughter Ruscha did the layout, and his wife Christina wrote the text. The book reflects the period in which Voormann came of age, and the “sideman” describes what made the Beatles era so unique. “We had a degree of freedom that was unthinkable right after the war in the early 1950s,” he says. And some designers were radically eliminating the trumpery that had previously obscured clear lines. This period produced the  legendary Braun stereo systems, for example. And a precision bass that is reduced to what it should be able to do—make music. The Porsche 911, which premiered in 1963, is also distilled to an appropriate form for a sports car. Which is why it has lived on for more than half a century. Perhaps that is also the secret of the Revolver cover. It is reduced to the profiles of the four  protagonists—and enriched by photos that tell their own stories without pushing into the foreground.

The famous cover is therefore a perfect reflection of what Voormann does himself: telling stories without pushing into the foreground. Imparting knowledge without overwhelming the viewer. Streamlining his profile to his skills and that which he values. Aesthetics. Perfection. Friendship.

Voormann, a musician, illustrator, and graphic designer, was born in  Berlin in 1938. He showed musical and artistic talent from the start  and refined the latter at the  School for Design (Meisterschule für  Gestaltung) in Hamburg. He got to know the Beatles in 1960 at the Kaiserkeller music club, and the friendship has lasted for over half a century. His musical career started in London, where he created the cover for the Beatles’ Revolver album. He has also designed covers for the Bee Gees and many other musical greats. Voormann now  lives on Lake Starnberg in southern Germany. 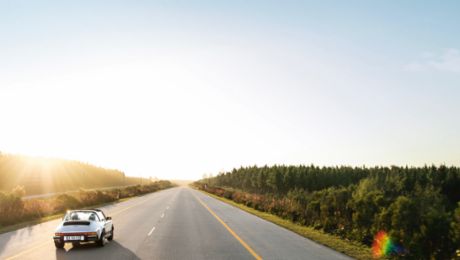 With the Porsche 911 SC Targa on the Garden Route

Perfumer Alexandra Carlin is immersing herself in South Africa.

With sports cars, colors are more than just makeup. The Targa is an especially good example 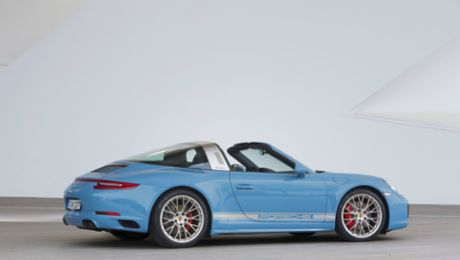 Porsche Exclusive has developed a special edition of the 911 Targa 4S.