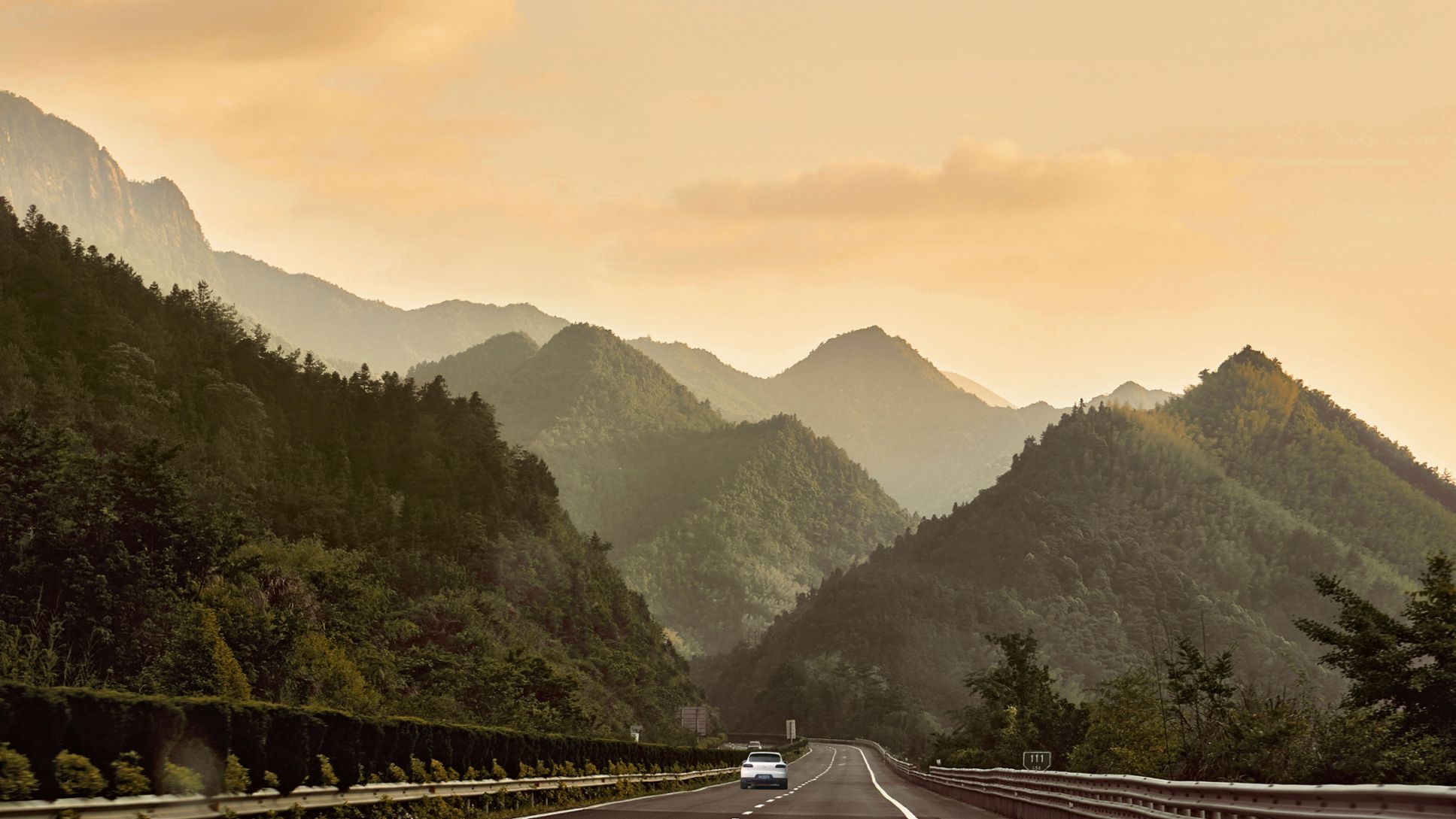 In the Realm of Ghosts

A small cableway, one of many, leads from the lively, densely populated plain, bisected by the Yangtze River, high up into the realm of the wind. It carries passengers over plunging gorges and dark, thickly wooded cliffs that look like Chinese paintings of light and darkness against the backlit sky. The gondola ferries hikers and day tourists up to an elevation of thirteen hundred meters, a bit closer to the dazzling sunlight with each passing second. It’s the most comfortable connection between the valley and the summit—and the guarantor that no visitor is obliged to stay any longer than desired in the realm of the spirits. Huangshan, or “Yellow Mountain,” is a natural setting of timeless beauty but has also been the domain of spirits for thousands of years. Such is the legend, in any case. The tourists wouldn’t have it any other way. A bit of harmless fright adds an extra touch of excitement.

An ice-cold wind floods into the opening door of the cable car, whipping the jackets and hair of the passengers. The mountain-top air is wonderfully clear, gentle and always in motion. In its dance between the peaks, it whistles striking songs. The inhabitants of the valley attribute the sounds to the spirits of their dead ancestors. Down on the Yangtze River, everyone knows that the ghosts of the past seek the freedom of the summit. On the summit, however, visitors quickly gather that the pine, spruce, and ginkgo trees, as well as bizarre rock formations, are the instruments on which the wind orchestrates its melodies. The sounds are not always harmonious: a shrill yelp suddenly changes to a soft whisper. The rhythmic swelling and ebbing of the underlying soundscape is drowned out by a whistling solo on a rock outcropping. Just a few steps away, a low-frequency hum dominates the sounds of the Yellow Mountains. Contemplative mystics find spiritual explanations for each of these natural phenomena. Yet even for agnostics, this auditory encounter with nature is overwhelming.

A winding road parallel to the highway

The Huangshan scenic landscape is a nature reserve in the southeastern province of Anhui. The range encompasses more than seventy peaks at more than one thousand meters. The highest point in the range, Lianhua Peak, is precisely 1,864 meters high. UNESCO has named Mount Huangshan a World Heritage Site. The range, which covers nearly 154 square kilometers, is just five and a half hours from Shanghai. Given the Chinese excursion culture, its subtropical allure makes the nature reserve a popular destination for city dwellers escaping the hustle and bustle of the metropolis for a few days.

The route to the Huangshan range goes through the Shanghai district of Songjiang before joining westbound traffic on the modern highway. Those seeking a more idyllic and dynamic route can opt for the twisting and turning rural road that runs parallel to the highway. The small city of Tangkou is the starting point for hikes through the national park. Buses leave for Mount Huangshan almost every minute, their destination being the valley station of the cableway. Visitors wishing to avoid the gondola’s stomach-churning heights can also scale the mountain by foot. On paths that can get quite steep, the march to the top takes roughly as long as the drive from Shanghai—about six hours.

Sixty thousand steps in the mountainside

Once at the top, visitors are treated to a picturesque mixture of pristine natural beauty and a colorful festival atmosphere. Solitude is not the idea here—community is the operative concept. Amid the sounds of the winds, which are amplified by the alleged mystical forces of the spirits, visitors are all too happy to view the spectacle in larger groups. All of the paths are well paved and well-worn. The oft-invoked existence of related souls confers upon locals and visitors in equal measure a responsibility to make their world accessible to all, particularly to the generations to come. In Buddhism, belief in reincarnation plays an extremely important role. Karma, too, is an important concept—good deeds bring rewards.

This positive mindset is an expression of the harmony between humanity and nature. So it’s no surprise that there are many paths in these mountains, including amazingly adventurous passages cut into the walls of the cliffs—not to mention a multitude of bridges and tunnels and more than sixty thousand stairs. The oldest of the mountain paths is said to have been built over fifteen hundred years ago. Popular with children and the elderly as well, Mount Huangshan attracts some fifteen million visitors every year.

Many guests stay the night, sleeping in simple mountain hotels. As the cableway is reserved for transporting visitors, the hotels are supplied by traditional means. Day after day, porters trudge up and down the mountain trails, carrying food, construction materials, and luggage. At times, they even carry exhausted tourists up the mountain in chairs affixed to carrying bars. Word has it that farmers from the valley earn a bit of extra cash this way. The rhythmic clacking of the shoes of dozens of porters all around mingle with the songs of the wind on the ascent.

Atop the mountain, beneath the wide-open sky, the light creates ever-changing color patterns on the sea of leaves and rough surfaces of the oddly shaped rocks. The never-ending sequence of new, breathtaking views is nothing short of spectacular. Most impressive, perhaps, is the mountain panorama at sunrise or dusk, and of course when dramatic cloud formations bring forebodings of stormy weather. At such moments, one is reminded of James Cameron’s Avatar and its Hallelujah Mountains, which were modeled on Mount Huangshan.

You don’t have to be a mystic to hear the beating wings of the ikran in the howling wind—the flying mountain banshees that carried Cameron’s heroine, the blue-hued warrior Neytiri, through the film with the deftest of mid-air maneuvers. Indeed, Mount Huangshan is said to have directly inspired Cameron’s vision of the floating mountains of Pandora. A sign at a viewing platform named “Where the monkey chases the sun” points out the similarity between the actual mountains and Cameron’s rendering. The peaks seem to float above the clouds as if above a sea with no beaches.

Since ancient times, the power and beauty of Yishan, as the mountainous region was known until the year 747, have inspired the imaginations of artists. Chroniclers tell us of Huangdi, the Yellow Emperor, who is said to have lived here more than four thousand years ago. Huangdi is revered for his contributions to Chinese medicine. Ever since Mount Huangshan took on his moniker, it’s said that the good spirits have made the peaks their own. The scenery serves as inspiration for Chinese artists, who still paint their pictures in the fine brushstrokes of their forebears in the line of traditional Chinese landscape painting—their depictions focused on the panoramic view of the Yellow Mountains.

“Scenes from the Huangshan mountains are increasingly popular in the new and very fast-paced life of contemporary China,” says Yang Songyuan. The brush maker is renowned among local painters for the quality of his brushes, which are made of goat or rabbit hair. The animal hairs are attached to the bamboo shafts by hand using traditional methods. “Ten brushes per day. And we even have customers abroad,” he reveals. Artist Li Zhigung explains that animal motifs, and particularly horses in the style of the Tang dynasty painters, are frequently commissioned nowadays by car brands. “Landscapes, by contrast, are very popular among private customers,” he says, returning the conversation to the souvenir images of Mount Huangshan laid out before him.

That popularity points to the fact that consumers, although they increasingly store their everyday lives in smartphones, still live with a deep sense of connection to nature. And that is why, even today, the “realm of the winds” above the “sea without beaches” is the center of the world for many Chinese. An inscription at the cableway’s valley station states: “He who has seen Mount Huangshan need not see another mountain.”

The Huangshan mountain range is among the most important tourist destinations in China, particularly for Chinese visitors. In 1990, it was named a UNESCO World Heritage Site. It is listed under the name “Mount Huangshan.” The most popular time to visit is from April to October; in April, flowers and herbs are in bloom. More details can be found at: www.chinahighlights.com 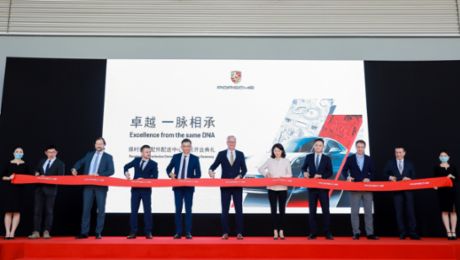 With an area of approximately 12,500 square metres, the new facility will serve 37 Porsche dealerships in southern China.

Porsche honoured as a “Top Employer 2020” in China

Porsche China was officially recognised as a Top Employer 2020 in China for its outstanding performance. 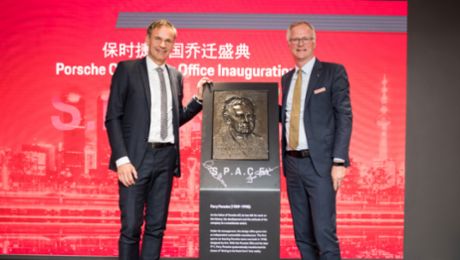 Start of a new chapter for Porsche China: relocating its Shanghai headquarters to the prestigious Lujiazui Financial Plaza. 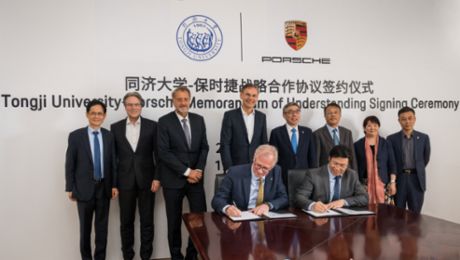 Porsche and Tongji University in Shanghai have expressed a desire to strengthen their cooperation.