Günthardt: “Our tournament was a positive signal for our sport”

The 44th Porsche Tennis Grand Prix set standards in the times of the pandemic. Even in the lead-up to the French Open, Tournament Director Markus Günthardt is still receiving many positive reactions.

For Markus Günthardt, the visit to the WTA 1000 Tournament in his adopted home of Madrid is a must. This year the talks he held there with the players and his fellow organisers were particularly pleasant. This was down to the many positive reactions evoked by the successful staging of the 44th Porsche Tennis Grand Prix. In the times of the pandemic, the long-standing Stuttgart tournament has left a lasting impression. “Many people have come up to me to congratulate us on our successful tournament,” said the Swiss when interviewed. “Everybody kept a close eye on how things went here in Stuttgart. We’ve obviously done a lot right.”

Mr Günthardt, the French Open begins on 30 May and you are still being asked about the Porsche Tennis Grand Prix. Is this normal?

Markus Günthardt: “It happens every now and again, but not as often as this year. Our final is a few weeks back now. But it was a very special tournament right in the middle of the pandemic. In the conversations with the players, tournament directors and WTA representatives, it could, and still can, be felt just how pleased everybody was that our concept in Stuttgart worked out so well. Everybody sees it as being a positive signal that normality is slowly returning to the Tour. It has also been attracting interest from beyond the realms of sport. We’ve set standards without a doubt.”

How did you personally experience the tournament?

Günthardt: “On the one hand, the time and effort needed was not quite as big as usual as we didn’t have any spectators and there was no VIP hospitality. But the pandemic put us under constant pressure, one that we hadn’t experienced up until that point. Will the hygiene concept work? Is the routing system in order? Is the testing functioning? It all led to a lot of tension. Despite the relief that everything worked out fine, I felt pretty tired afterwards.”

Did you have to intervene at any stage of the tournament because something wasn’t going to plan?

Günthardt: “All the processes were spot on. Major changes were not necessary. We established the basic conditions through the excellent collaboration with the WTA, the city of Stuttgart’s health authorities, the indoor arena operators and naturally Porsche AG. We had a really good basic concept in place. And the testing functioned extremely well. All in all, we conducted more than 5,200 tests. As for the players, the people around them and the organisers, all the tests were thankfully negative.” 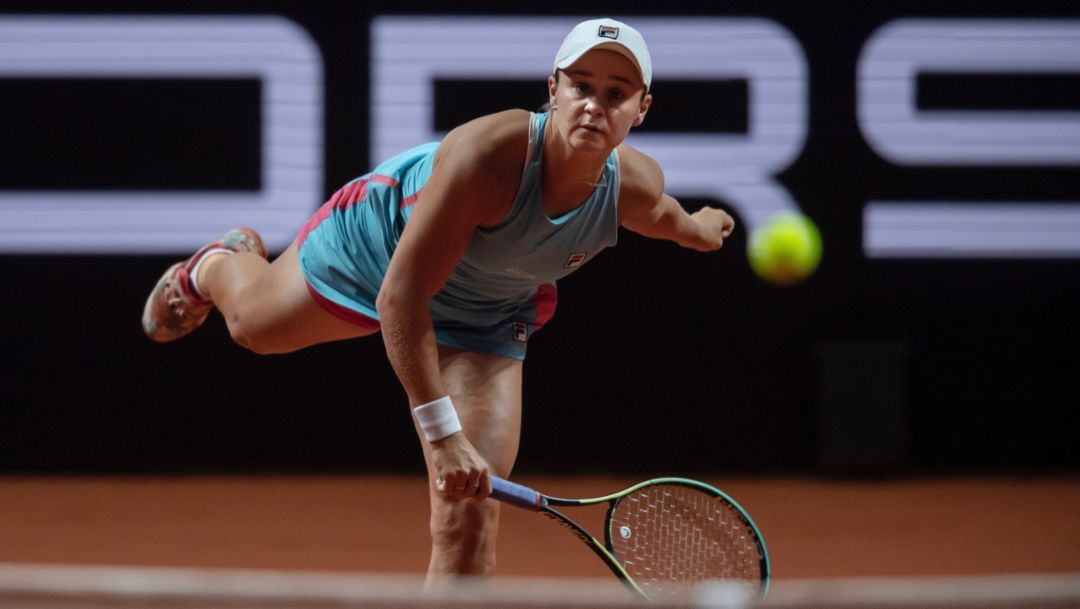 Normally the Porsche Tennis Grand Prix is the favourite tournament of many players. What were the reactions this time around?

Günthardt: “The players were all of the opinion that our bubble was the best they had come across, also the most pleasant. We did everything in our power to create a good atmosphere and, despite corona and the associated restrictions, give our tournament the feel-good character that the players in Stuttgart love so much. It’s something we obviously managed to do. The coaches and hitting partners of some players came up to me in Madrid and confirmed precisely that. Ashleigh Barty told me that she had felt very much at home in Stuttgart. I strongly assume that she will be returning next year to defend her title.”

Did you learn something from this year’s Porsche Tennis Grand Prix that you can take into future tournaments?

Günthardt: “Definitely. I can for example well imagine that certain elements of the very strict hygiene concept will be adopted by the WTA in future too – even if the pandemic at some stage will no longer determine our lives to such an extent as at the moment. I feel it’s highly likely that certain precautions will be retained also in normal times to provide even better protection for the players’ health.”

The fans that were unable to come to the arena due to corona enjoyed the tournament as a multi-media tennis experience with many interactive services. What will remain?

Günthardt: “We’ve established the basis upon which we can build in the future. We reached an international audience via the mainstream television channels and were well positioned in Germany with our partners SWR, Eurosport, n-tv and DAZN. One also has to remember the livestreaming of the matches on our homepage which was very well received. The extra camera positions and the chance to support the players by posting emojis also went down well. It resulted in us recording a total of more than 360,000 digital fan reactions. These virtual and digital components have always been very important for us.”

Let’s talk about the French Open. Many players start their preparations for Paris at the Porsche Tennis Grand Prix. An advantage?

Günthardt: “Definitely from my point of view. It’s not for nothing that so many top players decide every year to begin the European clay court swing at our tournament. They come from the hard-court events in USA. If they play first in our arena, free from all the weather conditions, they unquestionably get used to the clay easier than by kicking off their Paris preparations a week later in Madrid.”

How do you whet the players appetite to get them to decide in favour of Stuttgart?

Günthardt: “When the players come to us then they are definitely focussing on the French Open. This means we have to offer them conditions in which they can perform at their best and at the same time fine tune for Roland Garros. There are therefore only minor differences between the clay court in the Porsche Arena and the ones used in Paris. It primarily lies in the indoor climatic conditions and the 212 metres difference in altitude. Stuttgart is 247 metres high, Paris only 35. But we use the same balls as the French Open and we have consciously chosen a big Centre Court similar to the one in Roland Garros – except obviously for the stands. “

Some Stuttgart winners have gone on to win the French Open. Who can you think of off the top of your head?

Günthardt: “Maria Sharapova. I tried for years on end to entice her to Stuttgart. When she finally came in 2012, she first took the title in the Porsche Arena and then went on to win in Roland Garros. It convinced her. She achieved the feat again in 2014. The first player to do it was by the way Svetlana Kuznetsova. It happened in 2009 when the Porsche Tennis Grand Prix was played on clay for the first time.”

This time around Ashleigh Barty won the final against Aryna Sabalenka. How far do you feel she can go at the French Open?

Günthardt: “For me, she is one of the top favourites. The fact that she also reached the Madrid final shows that Stuttgart obviously did her a power of good. It would be nice if one of them could now go on to win the French Open.” 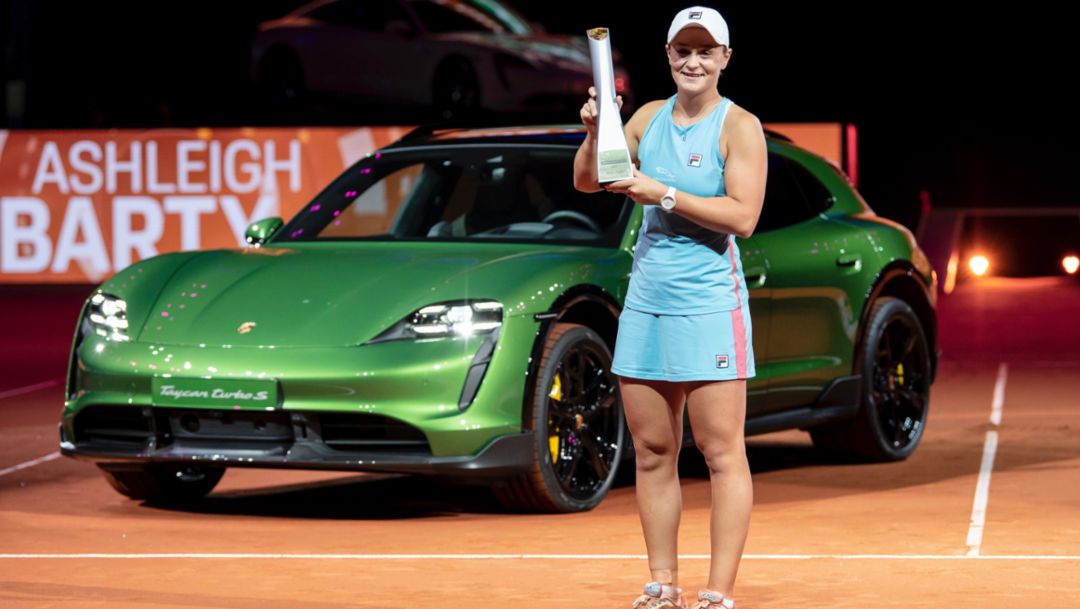 Ashleigh Barty is the new Stuttgart tennis queen. By triumphing at the Porsche Tennis Grand Prix, the world No. 1 crowned her week. 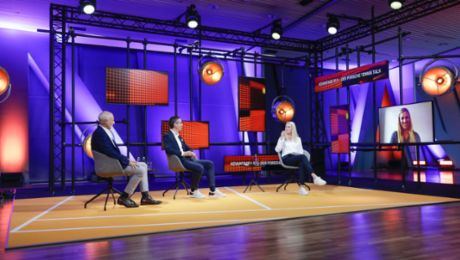 The Porsche Tennis Grand Prix is setting new standards with the best main draw field in its history.