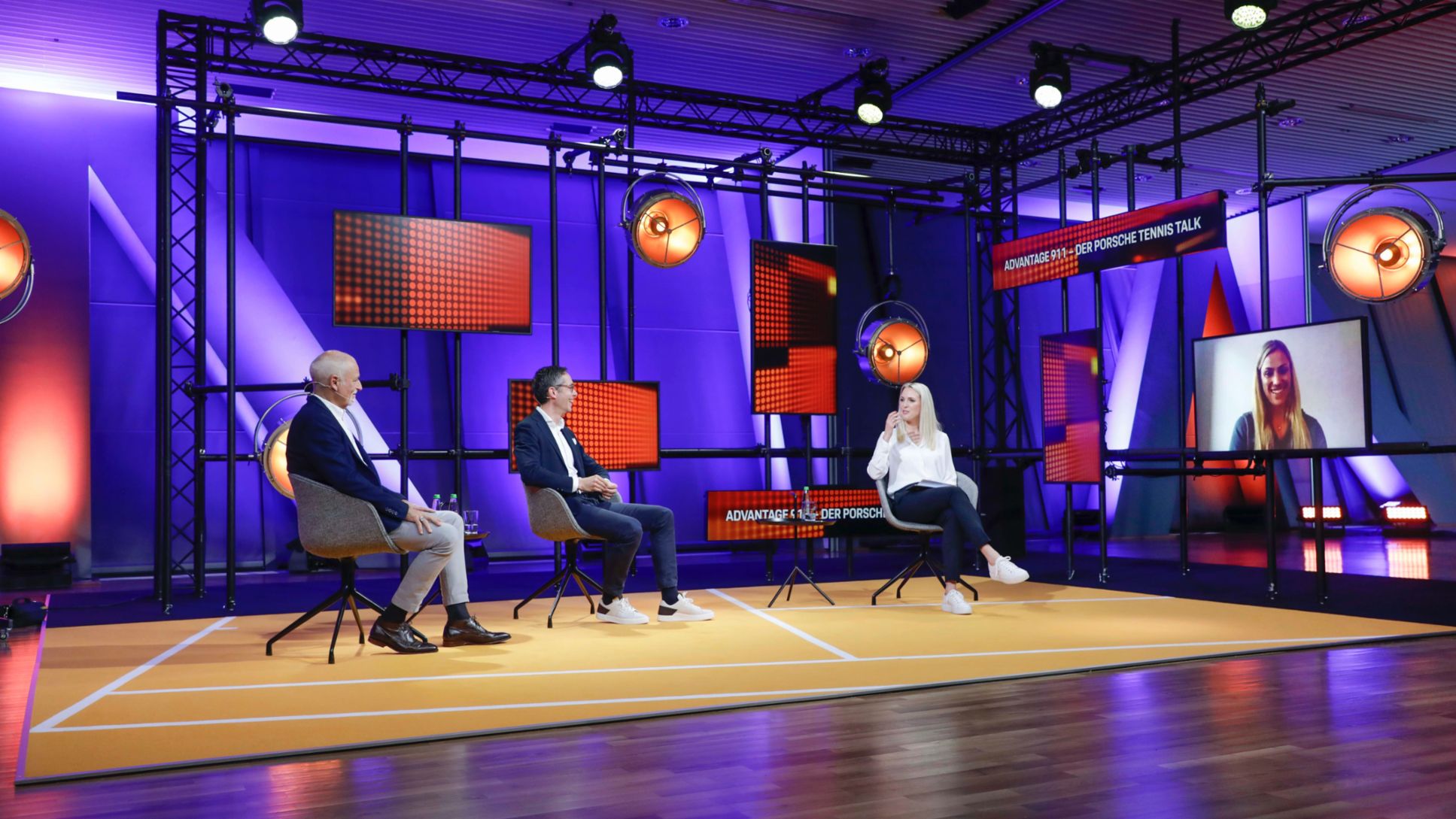 “There are so many top stars that we’ll be able to watch matches that could be a grand slam final from the second round onwards,” said Tournament Director Markus Günthardt at the premiere of Advantage 911 – The Porsche Tennis Talk in the Porsche Museum on Tuesday. As a part of a multi-media tennis experience, the tournament draw on qualifying Sunday will be given a bigger stage on Centre Court in the Porsche Arena – broadcast live and with famous guests. A regular at the tournament for many years now, the Aces for Charity campaign has also been upgraded: Porsche is doubling its donation for every ace hit during the tournament to 200 euros. The sum will be divided up equally between its charity partners, the Stiftung Agapedia foundation and the Landessportverband Baden-Württemberg.

Headed by the world number one Ashleigh Barty, seven Top 10 players and 14 from the Top 20 will be competing at the 44th edition of the long-standing Stuttgart tournament in the Porsche Arena from 17 to 25 April. Advantage 911 – The Porsche Tennis Talk took place for the first time as a part of a new multi-media experience for fans of the sport. It was live-streamed on newstv.porsche.com where it is still available. Günthardt was joined on stage by Dr Sebastian Rudolph, Vice President Communications, Sustainability and Politics at Porsche AG and Porsche Brand Ambassador and two-time Stuttgart winner Angelique Kerber, who took part virtually.

… the exclusive main draw field with numerous too stars:
Markus Günthardt: “It’s a unique field for a tournament of our category. Seven Top 10 players and seven grand slam champions plus the last four Stuttgart winners – I know of no other comparable event on the WTA Tour with so many top stars. It’s not only a nice compliment for the Porsche Tennis Grand Prix but also huge proof of the confidence the players have in us in these difficult times. It shows they trust us to provide safe conditions for everybody involved.”

… just how much the players appreciate the Porsche Tennis Grand Prix:
Angelique Kerber: “We players love the tournament. It’s something akin to an oasis of well-being on the WTA Tour. Not only are the facilities excellent but there’s also the wonderful feeling of being welcome here – no matter whether you are a star or a qualifier. No wonder the Porsche Tennis Grand Prix is regularly voted by the players as their favourite tournament in its category.”

… the importance of the Porsche Tennis Grand Prix for Porsche:
Dr. Sebastian Rudolph: “This tournament is the showpiece of our worldwide commitment to women’s tennis. Porsche has been on board right from the beginning, in 1978, as the title sponsor and then Porsche also took over the role as organiser in 2002. These days, the Porsche Tennis Grand Prix is one of the showcase events on the WTA Tour and is one of the annual highlights in the Stuttgart region. As a company, we are aware of our social responsibility, and it’s something we embrace in many areas. In tennis, we support the German Tennis Association’s Porsche Talent Team and Porsche Junior Team which foster the top up-and-coming German players in professional structures and accompany them on their way to careers as professional tennis players. Making the Porsche Tennis Grand Prix possible even in these difficult times is something that is dear to our hearts. We would therefore like to spread a sense of confidence and give a degree of normality back to the people who are momentarily going through very demanding times.”

… the challenge of organising an international sports event like the Porsche Tennis Grand Prix in these times:
Günthardt: “Together with Porsche and its partners, we have gone to great lengths to ensure the tournament takes place. “We have, I believe, developed a very good hygiene concept for our tournament. It enables us to establish safe conditions for everybody involved. Our big advantage is that we traditionally not only have the Porsche Arena to hand but also the Schleyer Halle with its numerous extra spaces and rooms on various levels. It’s also naturally beneficial that the players’ hotel is directly connected to the Porsche Arena. They’ll have everything they need there. Players will basically only come into the arena to practice and play matches.”

… spectators not being allowed into the Porsche Arena and the multi-media tennis experience for the fans:
Rudolph: “It was a decision we reluctantly had to take. We were in the middle of intensive discussions with the local authorities and the WTA and duly took the decision not to permit spectators in the Porsche Arena this time around at the start of March, therefore at a relatively early stage. The pandemic situation presented us with no other choice and it’s something we very much regret. Our fantastic audiences always create a wonderful atmosphere in the arena, and it is much appreciated by the players. The quality of the main draw field is an indication of just how popular the tournament is among the top stars. Fans can look forward to tennis of the highest class. We also want to present the tournament to them this year as a multi-media occasion.”

Günthardt: “Even though we have to play the tournament this year without an audience in the arena, we don’t want to leave our fans out in the cold. We’ve therefore come up with many ideas to enable them to have a very intensive and emotional tournament experience via television and digital and social media platforms. It ranges from the first ever transmission of all the singles matches on our www.porsche-tennis.com website to diverse interactive services. For instance, one can select from a variety of camera positions when watching our livestreams and therefore experience tennis from a totally new and unusual perspective. The tournament draw will also be given a bigger stage. It will be conducted on qualifying Sunday at 14:20 (CEST) and televised live on the tournament home page. Fans can look forward to today’s top stars and former tournament winners participating either in the flesh or virtually.” 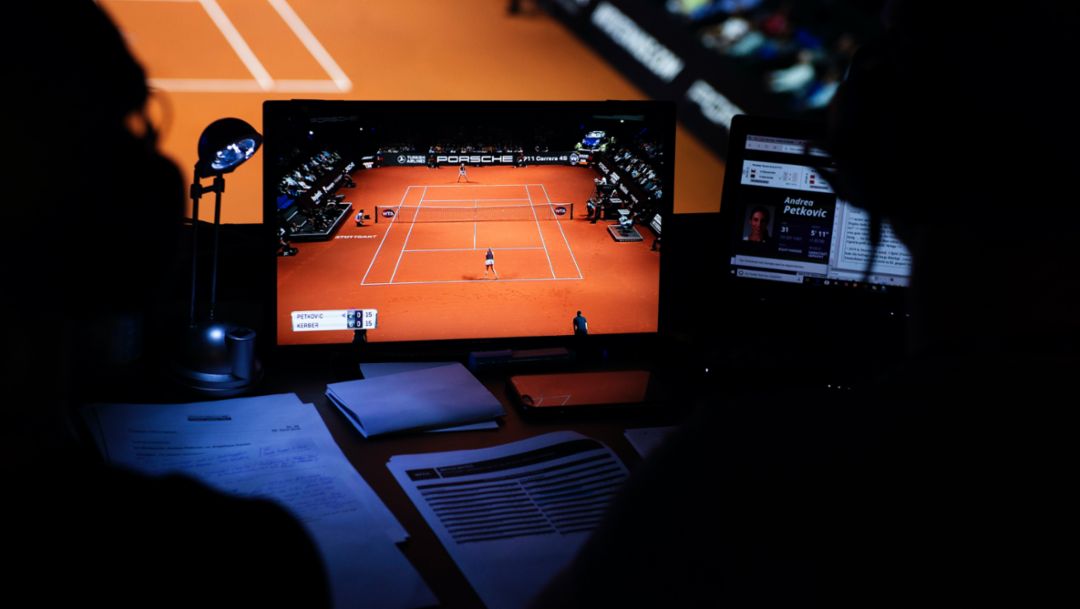 … the tournament’s social commitment with the “Aces for Charity” campaign:
Rudolph: “The campaign has been a fixture of the Porsche Tennis Grand Prix for many years now. For every ace hit during the tournament, Porsche normally donates 100 euros for good causes – but this year we have doubled the sum to 200 euros in view of the special situation. The money is divided up between our charity partners, the Stiftung Agapedia foundation and the Landessportverband Baden-Württemberg. They will use it to provide additional sport and recreational activities for children and adolescents to lessen the effects of the pandemic within the affected groups. For them in particular being unable to make use of any leisure and sporting opportunities is a major change in their lives. At the last Porsche Tennis Grand Prix in 2019 by the way, the players hit 212 aces and Porsche rounded the donation up to 30,000 euros.”

Kerber: “I can happily confirm that the players all have a burning desire to win the Porsche. For most of them it’s the nicest winner’s trophy on the WTA Tour. In Stuttgart, they have the car in their sights all the week-long during their matches – there can’t be any better motivation.”

… the difficulties as a player in the current situation to find one’s rhythm:
Kerber: “I’m a player that needs many matches and tournaments. Finding my normal match rhythm is obviously a little difficult this year. I was extremely well-prepared for the season, had practiced hard but then the quarantine before the Australian Open set me back a couple of months. I started practicing on clay immediately after the tournament in Miami and hope I can now get the match practice I so dearly need in Stuttgart. We players are so grateful that there are organisers in a position to stage a tournament in these times of crisis. I know just how much commitment and lifeblood goes into it.”

… the anticipation ahead of the Porsche Tennis Grand Prix:
Kerber: “This tournament has basically accompanied me all through my career. Irrespective of my two wins in 2015 and 2016, I was able to get lots of important experience there –experience that did me a world of good. I learnt things even when I lost. It means I always look forward to returning to Stuttgart. I’m particularly eager to find out what things will be like this year with the strict coronavirus regulations and being without the fans that produce an otherwise fantastic atmosphere in the Porsche Arena. I’ll miss them most of all.” 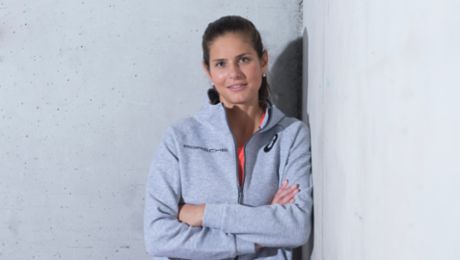