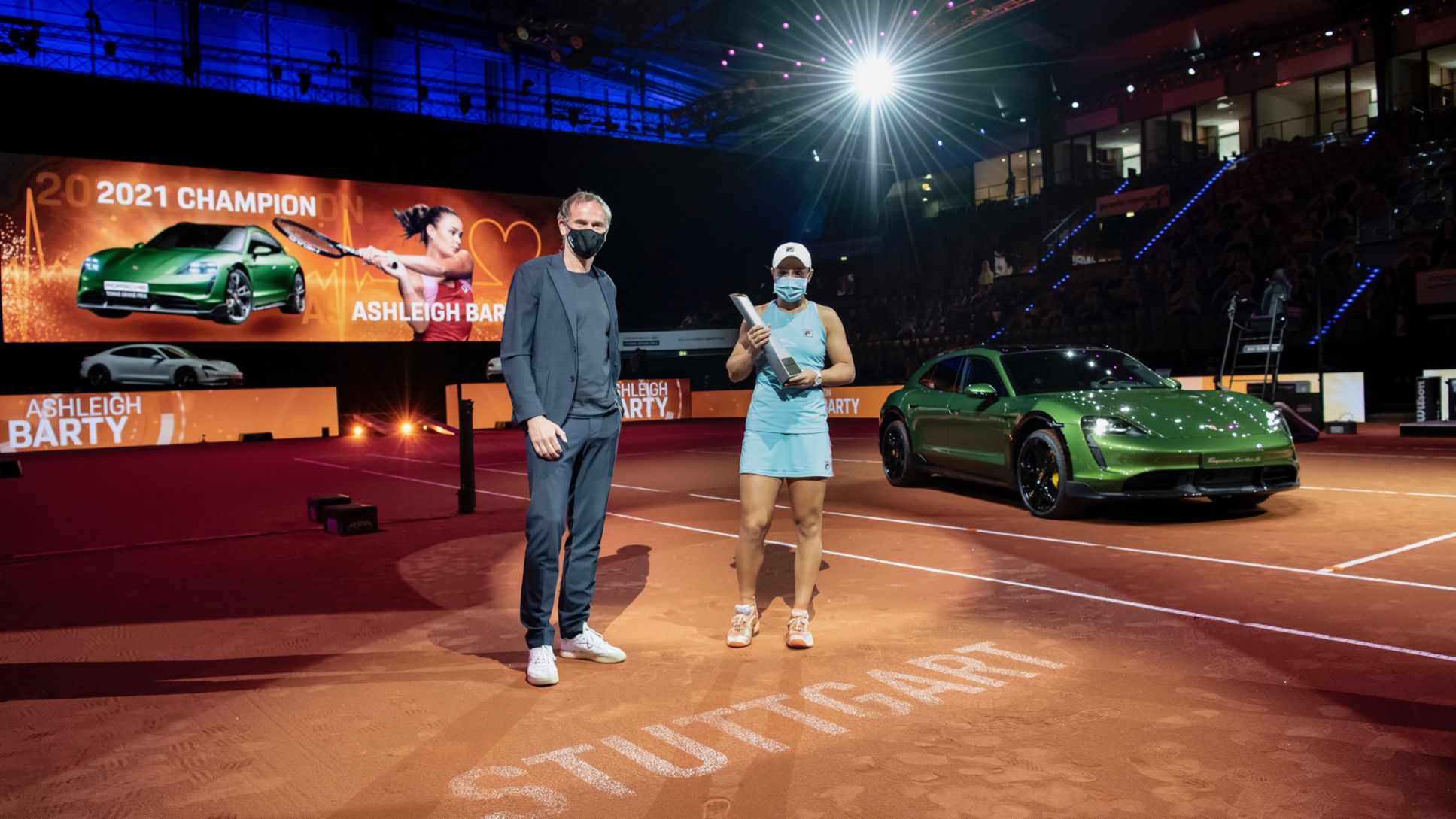 One day after her 25th birthday, she was not only the first Australian to win the singles final by beating Aryna Sabalenka from Belarus 3-6, 6-0, 6-3 but also secured the doubles title immediately afterwards together with Jennifer Brady (USA). She is the first player in the history of the time-honoured Stuttgart tournament to pull off the feat in the Porsche Arena. The last person to claim both titles was the American Lindsay Davenport in 2001 - back then the Porsche Tennis Grand Prix was still at home in Filderstadt. Her win has also now put Ashleigh Barty into the lead of the Porsche Race to Shenzhen, the official qualifying ranking for the WTA Finals.

Of the two finalists, Aryna Sabalenka got off to the better start in the singles final. Playing powerfully and with lots of courage, she rewarded herself by taking the first set. The hot favourite going into the match at the 44th edition of the long-standing Stuttgart tournament, Ashleigh Barty had to recover from losing the first set, just like in the quarter and semifinals. It however was no big deal for momentarily the world’s best women tennis player. She began countering her opponent’s aggressive game and the world No. 7 started making mistakes. In an almost record breaking 20 minutes, the Australian first levelled the match at one set all and was then 3-love up in the third. Sabalenka forced her way back into the match, reduced the deficit to 3-2 and put everything into warding off the looming defeat. Barty however remained cool, and the Belarusian’s power attacks that gave Simona Halep the feeling the day before in the semifinal that she was being “run over by a locomotive”, all came to nothing. After one-hour 47 minutes, the Australian clinched the match with her second match point.

Time for some shots of our 2021 Porsche Tennis Grand Prix champion @ashbarty with her trophies! 📸🏎🏆

“I’ve heard so many fantastic things about this tournament and I have to say that they’ve all been confirmed, even in these difficult conditions. I’m so happy to have been able to come here,” said Ashleigh Barty who has now claimed her third WTA title of the season after previously winning the Yarra Valley Classic and the Miami Open. “Porsche has put on a great event in this fantastic arena, it’s no wonder that it has an unbelievable main draw field.” The Porsche Taycan Turbo S Cross Turismo, the main prize for the winner, was driven onto Centre Court personally by Oliver Blume, the Chairman of the Executive Board of Porsche AG.

After winning the title at the 2019 French Open, the triumph in Stuttgart is only her second tournament win on clay. She is the first reigning world No. 1 to win the Porsche Tennis Grand Prix since the Belgian Justine Henin in 2007.

Ashleigh Barty had little time to recover after the singles victory ceremony as she had to go back on court for the doubles final together with the American Jennifer Brady – and triumphed once again. A 6-4, 5-7, 10-5 win against the US doubles pairing Desirae Krawczyk/Bethanie Mattek-Sands handed the Australian her second title in one day at her debut appearance in Stuttgart. Alongside the prize money, the winning doubles team also each received a TAG Heuer Connected from the tournament’s watch partner.

“A successful tournament in difficult times”

“It was a quite special Porsche Tennis Grand Prix. It hurt not being able to welcome spectators to the Porsche Arena. But we managed to put safe conditions in place for everybody involved, from the players to the ball kids. We’re therefore generally very satisfied,” said Tournament Director Markus Günthardt at the traditional Closing Press Conference before the singles final. Anke Huber, the Operating Tournament Director also was positive when reviewing the event saying, “We’ve seen tennis of the highest class here, all through the week. Six Top 10 players were in the quarterfinals and four in the semis, we can be highly satisfied. Some grand slams would be more than happy to have semifinals of that quality.”

Not only was the 44th Porsche Tennis Grand Prix a success but also the “Aces for Charity” campaign. It has been a fixture at the time-honoured tournament for many years. Due to the special circumstances, Porsche has this year donated 200 euros to good causes for every ace, double the usual amount. During the tournament week a total of 260 aces were struck and Porsche rounded the donation up to 60,000 euros. The money will go to the tournament’s charity partners, the “Stiftung Agapedia” foundation and the “Landessportverband Baden-Württemberg” sports association. They want to fund additional sport and recreational activities for children and adolescents to alleviate the effects of the pandemic. A big part in the large donation was played by Karolina Pliskova. The 2018 Stuttgart winner sent down 21 aces alone in her match against Jelena Ostapenko to set a new record on clay.

Our new media hub containing all the relevant information about the Porsche Tennis Grand Prix like press releases, match results, statistics, audio recordings of press conferences with players and photos is available to journalists via the Porsche press data base at presse.porsche.de/mediahub. Further contents can be found in the Porsche Tennis Media Guide.

Numerous top stars and an emotional tournament experience for fans

The Porsche Arena is ready for a tennis week of superlatives at the Porsche Tennis Grand Prix 2021.