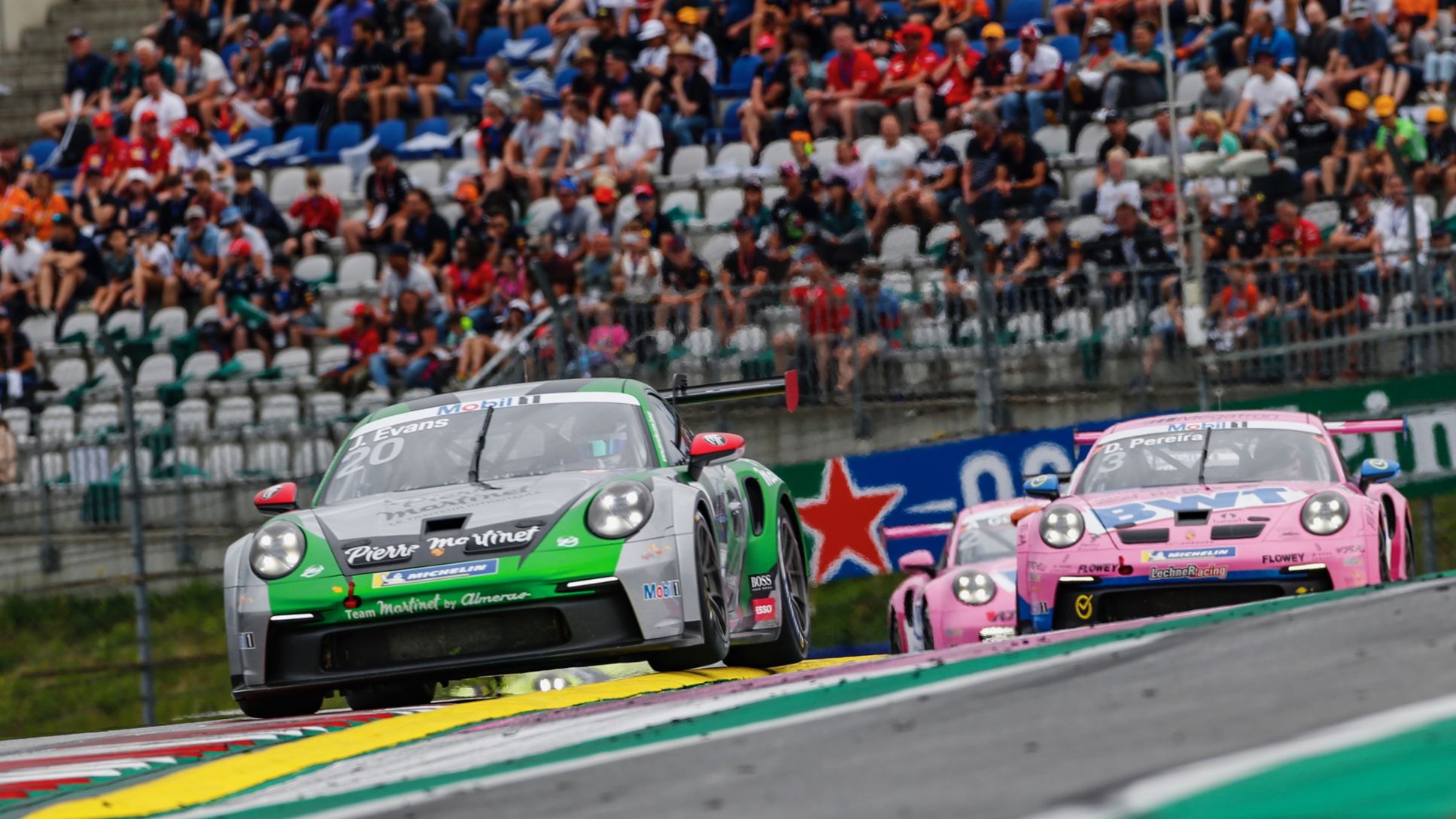 The Red Bull Ring continues to be good turf for Jaxon Evans: the New Zealander won round three of the Porsche Mobil 1 Supercup on the Formula One circuit in Styria.

It was here in 2020 that the Martinet by Alméras driver won his very first race in Porsche’s international one-make cup. This time around, Evans swept to the front in the first lap and controlled the 32-strong field over the remainder of the race. At the flag, he held a 0.646-second lead over Luxembourger Dylan Pereira (BWT Lechner Racing), who had taken up the race from pole position. Third place was enough for Larry ten Voorde (Team GP Elite) from the Netherlands to defend his championship lead.

The second Spielberg race within two weekends got off to a turbulent start. Taking up the race from the second grid spot, Evans overtook Pereira shortly after the start when he had to veer into the run-off area in a corner. “The brake balance was perfect in qualifying but wasn’t quite optimal in the race – the front wheels locked up for a second,” said Pereira, explaining his detour. While a vehicle was being salvaged from the gravel trap shortly afterwards, the race officials deployed a safety car. The race had only just gone green again when a similar incident caused another safety car phase. Evans kept his cool after the two restarts and even managed to pull clear of his pursuers. “I was certain that Dylan would have problems with his tyres after his brakes locked up so I wasn’t too worried,” revealed the New Zealander, who has advanced to position two in the standings after his victory.

While Evans and Pereira turned their laps at a respectful distance, a fierce fight for third place unfolded behind them. Defending champion Larry ten Voorde, Porsche Junior Ayhancan Güven (BWT Lechner Racing) from Turkey and Germany’s Laurin Heinrich (Nebulus Racing by Huber) battled amongst themselves in almost every corner and also switched positions. Güven overtook ten Voorde only to have a puncture knock him out of the three-way fight during the penultimate lap. Ten Voorde managed to fend off Heinrich, who ultimately took the flag in fourth place and won the rookie classification. “I couldn’t do more today,” admitted ten Voorde, the reigning champion and winner of last weekend’s race at the Red Bull Ring. “Ayhancan’s overtaking manoeuvre was superb. If it hadn’t been for the puncture, I’d never had caught him again.”

The ProAm category went to the Monegasque Nicolas Misslin (Lechner Racing Middle East), who shared the podium with Stéphane Denoual (F/Pierre Martinet by Alméras) and the defending ProAm champion Roar Lindland (N/Nebulus Racing by Huber). Hollywood star Michael Fassbender (X-Men, 12 Years a Slave) finished the race on 24th as a guest driver in the Porsche 911 GT3 Cup. “My goal was to beat the other amateur guest driver Georgios Frangulis to the flag – and I did it,” concluded the German-Irish actor, who normally contests the European Le Mans Series (ELMS) in the Porsche 911 RSR.

The winner’s trophy was presented by Albrecht Reimold, Member of the Executive Board, Production and Logistics, at Porsche AG. “It’s fantastic that spectators can now return to the circuits. The Porsche Mobil 1 Supercup races always have a great atmosphere. As the person responsible for production, I’m thrilled that the teams are very satisfied with the new Porsche 911 GT3 Cup,” he commented. “As a sponsor for sustainability with our company, I’m proud that the Supercup is powered by regenerative fuel from renewable sources. Motorsport at Porsche has always brought about innovations that benefit production vehicles. Now, motorsport again has the unique chance to advance key elements not only for the automobile but also for society as a whole. In this regard, Porsche has taken the perfect first step.”

Round four of the Porsche Mobil 1 Supercup will be contested in Budapest, Hungary from 26 to 28 July, 2021.

A long dry spell has ended for Dylan Pereira at the Red Bull Ring: the Luxembourger turned the fastest lap during qualifying for round three of the Porsche Mobil 1 Supercup. Fittingly, he set pole position for the first time in almost a year on the home turf of his BWT Lechner Racing team. After the first two races of the season, the reigning vice-champion currently ranks 17th in the standings. “I’m pleased that everything finally ran perfectly again. Last weekend here in Spielberg, things didn’t go so well for me. Since then, my team has worked hard and my car now has a significantly better setup,” commented Pereira.

The military athlete was just 0.118 seconds faster than Jaxon Evans (Martinet by Alméras) on the 4.318-kilometre Formula One circuit. “When I went out on my second set of tyres, yellow flags came out so I had to slow down slightly. After that my tyre pressure wasn’t ideal. Had this not happened, perhaps I could have beaten Dylan’s time,” explained Evans, who had turned the fastest lap in Friday’s free practice at the wheel of his ca. 375 kW Porsche 911 GT3 Cup.

For the Turkish Porsche Junior Ayhancan Güven, the hunt for pole position was also less than ideal on the second set of tyres. Despite rounding off the strong qualifying result for the BWT Lechner Racing squad with the third quickest time, he was anything but happy. “On my flying lap, the intermediate times in the first two sectors looked like I’d set a new top time. Unfortunately, a colleague hampered me in the last sector.”

Championship leader Larry ten Voorde (NL/Team GP Elite), the winner of last weekend’s Spielberg race, posted the fourth quickest time. Taking up Sunday’s race from the third grid row is Germany’s Laurin Heinrich (Nebulus Racing by Huber), who won a round of the Porsche Carrera Cup Deutschland on the Red Bull Ring three weeks ago. Lining up alongside him is Marius Nakken (FACH AUTO TECH) from Norway. Positions 1 to 22 are separated by less than a second.

Pereira celebrates a comeback on the very track where he claimed second place and a win in the Porsche Mobil 1 Supercup in 2020. In contrast, the defending vice-champion is experiencing mixed fortunes this season. Race 1 in Monaco: fastest in free practice, accident in qualifying, last grid spot to eleventh place in the race. Race 2 last weekend in Spielberg: eighth in qualifying, only 25th in the race after an accident and time penalties. “A mere five points from two races is not how I imagined the start of the season. I hope I’ve broken my unlucky streak. Now the pursuit begins,” said a confident Pereira.

Round three of the Porsche Mobil 1 Supercup over 18 laps starts on Sunday (4 July 2021) at 12:15 CEST. Hollywood star Michael Fassbender tackles the event in the No. 911 VIP car. The German-Irish actor, who usually contests the European Le Mans Series (ELMS) in a Porsche 911 RSR, makes his second guest appearance in Porsche’s international one-make cup.

Michael Fassbender has a score to settle in the Porsche Mobil 1 Supercup. In August 2020, the German-Irish actor (X-Men, 12 Years a Slave) made his first guest appearance in the Porsche 911 GT3 Cup at the Barcelona round of the international one-make cup. At that time, he was the unwitting victim of a race accident and had to retire after a few kilometres. This weekend, Fassbender gets another chance when the Porsche Mobil 1 Supercup contests its second round in a row at Spielberg as support to the Austrian Grand Prix (2 to 4 July).

Fassbender, who competes in the European Le Mans Series (ELMS) at the wheel of a Porsche 911 RSR and is familiar with the 911 GT3 Cup from testing, explains: “To tackle a one-make series like the Porsche Mobil 1 Supercup is always a challenge. The competition is stiff. All the drivers are fast, they know the car inside out and can get the best out of it. So, I’m here to learn. Surprisingly, the Supercup drivers are really open to helping. The new 911 GT3 Cup is slightly different to the 911 RSR, which has a more efficient aero. The brakes bite a little more, as well, so I have to adapt.”

Fassbender is impressed by the Porsche Mobil 1 Supercup’s strategy of using synthetic fuel made from renewable sources. “I love racing. At the same time I’m aware that we have to care for the environment. Re-fuel, which takes carbon dioxide out of the environment during production, is definitely a step in the right direction.”

A 32-strong field of ca. 375 kW (510 PS) 911 GT3 Cup are expected to contest round three of Porsche’s international one-make cup. Once again, the hot favourite on the 4.318-kilometre Formula 1 circuit is Larry ten Voorde (GP Elite) from the Netherlands. The defending Supercup champion won the first two races of the season as support to the Monaco Grand Prix as well as the Red Bull Ring race last weekend. “Over the past few years, the Spielberg racetrack hasn’t been particularly lucky turf for me. But I’m doing much better there now with the new 911 GT3 Cup. I can thank my team for this. They prepared my car perfectly for the track,” said ten Voorde.

Three days ago, Porsche Junior Ayhancan Güven (BWT Lechner Racing) had to admit defeat to ten Voorde. Now, he aims to turn the tables. “Last Sunday I trailed Larry for 18 laps. I know where I’m losing time compared to him on the Red Bull Ring and I’m working on that,” stated the Turkish racing driver.

The second Porsche Mobil 1 Supercup race within two weeks at Spielberg takes off on Sunday, 4 July, at 12:15 pm CEST. The TV channels Eurosport and Sky Sport and the streaming service f1tv.formula1.com provide a live broadcast. Fans can also follow the Porsche Mobil 1 Supercup action at any time on the social networks Twitter, Instagram and Facebook.

Many countries’ current quarantine restrictions for travellers coming from Great Britain have made it necessary to adjust the Porsche Mobil 1 Supercup calendar. In liaison with the teams, the originally planned Silverstone event run as support to the British Grand Prix (16 – 18 July 2021) will be replaced with a second race on the final weekend at Monza (10 – 12 September 2021). As a result, the total number of eight races contested this season remains unchanged.

Porsche and ExxonMobil are implementing a two-stage strategy in the introduction of renewable fuels in the Porsche Mobil 1 Supercup. This season, the racing vehicles will be powered by a blend of bio-based fuel. This advanced biofuel is obtained from food waste products. Additional components are blended in to enable the required fuel properties and combustion behaviour. In 2022, the next step will be to introduce synthetically manufactured eFuel. This Esso Renewable Racing Fuel is anticipated to reduce greenhouse gas emissions by up to 85 per cent, when blended to current market fuel standards for today's passenger vehicles. The partnership between Porsche and ExxonMobil aims to gain valuable experiences to find pathways toward potential future consumer adoption.