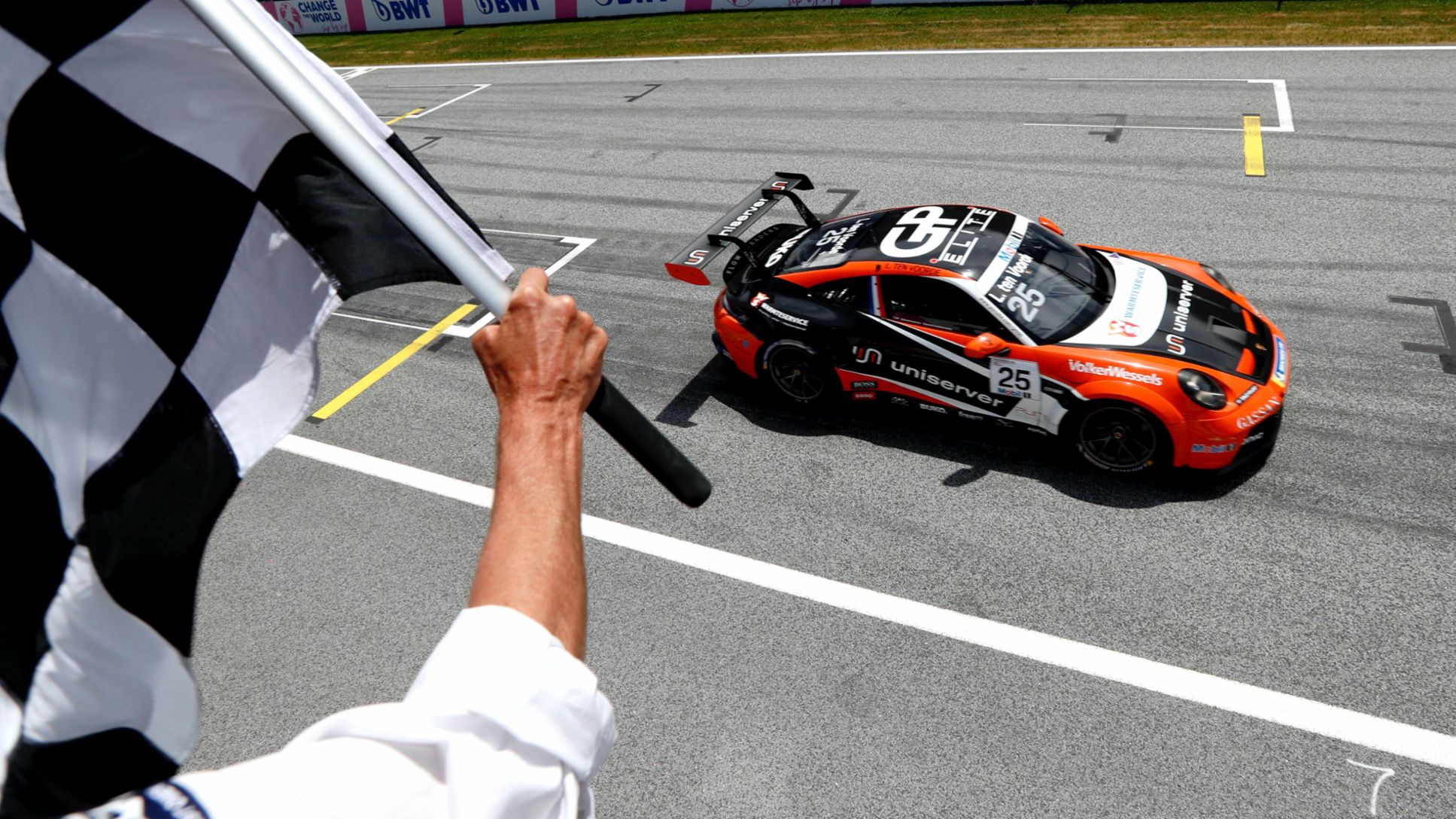 Pole position on Saturday, lights-to-flag win on Sunday: Larry ten Voorde (Team GP Elite) from the Netherlands dominated round two of the Porsche Mobil 1 Supercup in Spielberg as if at will.

“I got off the line perfectly at the start and I was also lucky that my pursuers hampered each other on the first kilometre,” stated the reigning Supercup champion, describing the initial phase. While the Turkish Porsche Junior Ayhancan Güven (BWT Lechner Racing) managed to defend his second grid spot, Germany’s Leon Köhler (Nebulus Racing by Huber) slipped past the Frenchman Dorian Boccolacci (Martinet by Alméras) in the first lap. The leading quartet crossed the finish line after 18 laps on the Red Bull Ring in that order. Thanks to his second win of the season, ten Voorde extended his championship lead significantly. Boccolacci is the new runner-up in the points’ standings.

In contrast to the winner, Güven was not happy with his start. “I didn’t get a chance to attack Larry in the early stages. Afterwards, he was simply too dominant,” admitted the Porsche Junior. Köhler, however, made the most of a minor error made by Boccolacci, who had taken up the race from the third grid spot, and wrested this position from him. “Dorian opened the door, I was able to stick behind Ayhancan and overtake Dorian in his slipstream,” said the pleased 21-year-old German. Boccolacci’s second victory in the rookie category of the Porsche Mobil 1 Supercup was cold comfort. “I was aiming for the podium.”

While the first four positions were spoken for early, a fierce three-way fight for fifth place raged over the entire race. Max van Splunteren (Team GP Elite) fended off repeated attacks from Jaxon Evans (Martinet by Alméras). “Jaxon nudged me slightly a few times under braking, but I always managed to keep him behind me on the next straight,” explained Van Splunteren. For his part, the New Zealander shook off all overtaking attempts from Christopher Zöchling (FACH AUTO TECH). With his special racing car livery, the Austrian called attention to the fact that the fuel used in the Porsche Mobil 1 Supercup comes from renewable sources.

Dorian Boccolacci has proven unbeatable in the rookie classification in the two races contested so far this season. In Spielberg, the ex-Formula 2 driver finished a convincing fourth overall ahead of Germany’s Laurin Heinrich (Nebulus Racing by Huber) in ninth, and Lodovico Laurini (Dinamic Motorsport) from Italy who took the flag in P15. In the ProAm classification, Roar Lindland (Nebulus Racing by Huber) from Norway led the ProAm class across the line for the first time this season at the wheel of his ca. 375 kW (510 PS) Porsche 911 GT3 Cup. The defending ProAm champion won his division over Nicolas Misslin (Lechner Racing Middle East) from Monaco and Philipp Sager (Dinamic Motorsport), for whom the Red Bull Ring is home turf.

The Porsche Mobil 1 Supercup stays in Spielberg for another week. Coming weekend (2 to 4 July 2021), the Red Bull Ring hosts round three of the season, which is run as support to the Austrian Grand Prix.

The third-quickest time on the 4.318-kilometre Formula One racetrack was achieved by Dorian Boccolacci (Martinet by Alméras). The rookie from France was just three-thousandths of a second off Güven’s time in his  911 GT3 Cup. The second qualifying session of the 2021 season once again underlined how high the level of competition is in Porsche’s international one-make cup: the fastest 15 of the 28-strong field qualified within a second of one another.

Larry ten Voorde was a little surprised by his top qualifying time. “The Red Bull Ring hasn’t been particularly good turf for me in the past, not in the Porsche Mobil 1 Supercup nor in the Porsche Carrera Cup Deutschland. The fact that we’ve managed to set pole position shows how much we’ve progressed as a team. I’m proud of my boys,” said the delighted reigning Supercup champion.

After posting the quickest time in free practice on Friday, Ayhancan Güven was not entirely satisfied. “The track changed significantly compared to yesterday, probably because of Formula 1 tyre wear. As a result, my car’s balance wasn’t ideal,” the Porsche Junior speculated. Like polesitter Ten Voorde, Dorian Boccolacci did not expect his positive qualifying result. “I wasn’t at the front during testing here, in the Porsche Carrera Cup Deutschland race or in free practice yesterday. My first lap today was the fastest and was enough for the third grid spot. I hope things go as well for me in the race on Sunday,” commented Boccolacci, the fastest rookie in the Porsche Mobil 1 Supercup and currently third in the championship.

The 911 GT3 Cup fielded by FACH AUTO TECH rolls onto the grid decked out in a special livery. Christopher Zöchling’s No. 6 racer is painted with a landscape from the team’s home region – the Swiss Alps. The wording “eFuels – from motorsports to production cars” refers to the Porsche Mobil 1 Supercup strategy of using synthetically produced fuels from renewable sources, which was adopted at the start of the 2021 season. “eFuels represent state-of-the-art technology. Motor racing plays a pioneering role in the development and implementation. We’re proud to contribute valuable insights with our commitment,” confirms team boss Alex Fach. The racing vehicles campaigned in the Porsche Mobil 1 Supercup have run on Esso Renewable Racing Fuel since the beginning of the season. Initially, a blend of bio-based fuel obtained from food waste products will be used. In 2022, the next step will be to introduce an electricity-based fuel (eFuel) produced from wind energy.

Zöchling tackles the race on Sunday (27 June 2021) from grid position 12. The race gets underway at 12:25 pm CEST. The TV channels Eurosport and Sky Sport and the streaming service f1tv.formula1.com provide a live broadcast. Fans can also follow the Porsche Mobil 1 Supercup action with the Porsche 911 GT3 Cup at any time on the social networks Twitter (@PorscheSupercup / @PorscheRaces), Instagram (@PorscheSupercup) and Facebook (@PorscheSupercup).

After an amendment to the Formula One calendar, Spielberg in Austria hosts the Porsche Mobil 1 Supercup twice in a row. The programme outlines a double-header at the Red Bull Ring as support to the Styrian Grand Prix (25 to 27 June 2021) and the Austrian Grand Prix (2 to 4 July 2021).

Almost half of the 30-strong field has already notched up some experience on the 4.318-kilometre racetrack with the Porsche 911 GT3 Cup, which was newly developed for the 2021 season. About a dozen Supercup drivers also compete in the Porsche Carrera Cup Deutschland, which held rounds five and six on the Styrian track a fortnight ago. However, there’s one difference: in the international Supercup, the ca. 375 kW (510 PS) four-litre naturally aspirated engine in the 911 GT3 Cup is powered by Esso Renewable Racing Fuel. The blend of fuels is predominantly made from renewable, bio-based components.

“As expected, the spectacular start of the season in Monte Carlo underlined the high level of competition among the drivers and teams. Now we’re returning to a racetrack that is familiar to almost all of the competitors. Last season at the Red Bull Ring, the fastest 16 qualified within one second of each other. I think we can look forward to an extremely balanced playing field and some action-packed racing,” predicts Oliver Schwab, Project Manager Porsche Mobil 1 Supercup.

A hot favourite for this season’s title is the defending Supercup champion Larry ten Voorde. Driving for the GP Elite team, ten Voorde won the season opener in Monte Carlo and currently sits at the top of the leaderboard. Victory at the Red Bull Ring, however, has so far eluded the Dutchman. In the 2020 season, the two Spielberg wins were secured by Jaxon Evans from New Zealand and the Luxembourger Dylan Pereira. In the Porsche Carrera Cup Deutschland, the victories went to Germany’s Leon Köhler and Laurin Heinrich. Pereira (BWT Lechner Racing), Evans (Martinet by Alméras), Köhler and Heinrich (both Nebulus Racing by Huber) are also among the favourites to win races two and three of the 2021 Supercup season.

The first of the two Porsche Mobil 1 Supercup races at Spielberg takes off on Sunday (27 June 2021) at 12:30 CEST. The action will be broadcast live on Eurosport and Sky Sports as well as the f1tv.formula1.com streaming service. Fans can also follow the Porsche Mobil 1 Supercup action with the Porsche 911 GT3 Cup at any time on the social networks Twitter, Instagram and Facebook.

In 2022, the next step will be to introduce synthetically manufactured eFuel. This Esso Renewable Racing Fuel is anticipated to reduce greenhouse gas emissions by up to 85 per cent(1), when blended to current market fuel standards for today’s passenger vehicles. The partnership between Porsche and ExxonMobil aims to gain valuable experience in finding paths towards potential future consumer adoption. 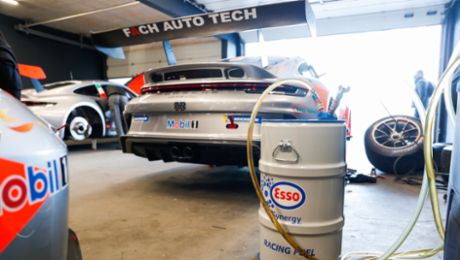