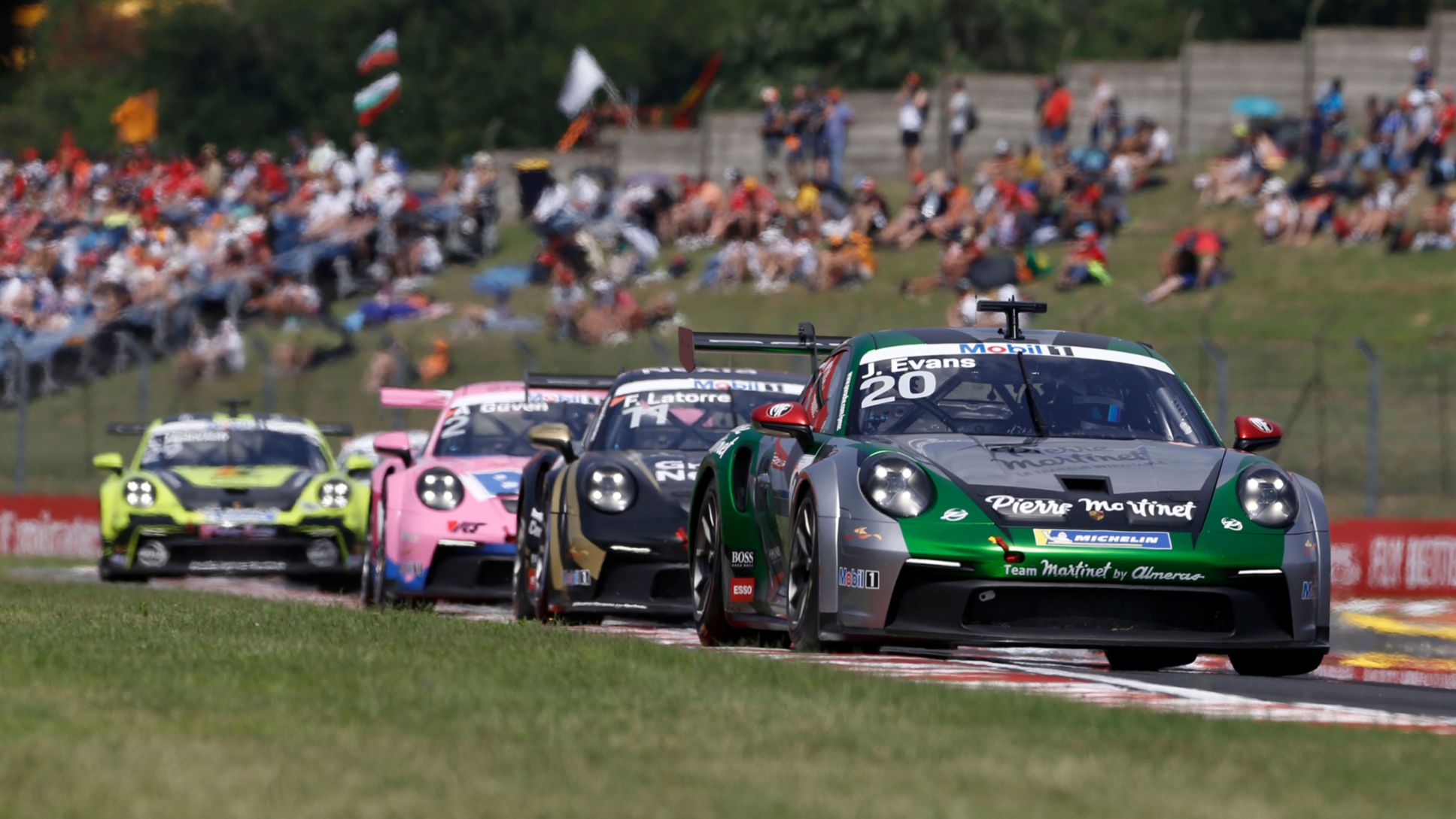 Although the French guest driver Marvin Klein had crossed the finish line first on the Hungaroring, a subsequent technical scrutineering showed that the amount of fuel in the tank of the CLRT team’s 911 GT3 Cup was below the mandatory remainder of two kilograms. As a result, the Stewards of the Meeting disqualified Klein from the race. Thus, victory went to the runner-up, in this case, the current leader of the standings Larry ten Voorde (Team GP Elite) from the Netherlands.

Had the field not completed four laps behind the safety car at a relatively slow speed, Klein may not have made it over the finish line anyway – a situation that speaks against deliberately putting too little fuel into Latorre’s car. “We have no explanation,” said Benjamin Floch, engineer at CLRT. “According to our calculations, we refuelled our two cars identically. And after the race finished, we pumped eight kilos of petrol out of Florian Latorre’s car.”

Larry ten Voorde was not particularly satisfied about his inherited win. “Marvin was clearly the best today, a few kilograms of fuel in the tank would not have made any difference,” he said, paying tribute to the guest driver. With this result, the defending Supercup champion extends his championship lead by 17 points over New Zealander Jaxon Evans (Martinet by Alméras), who took the flag in second place. Third place went to the Frenchman Florian Latorre in the second 911 fielded by CLRT.

Due to a collision, the safety car came out for a few minutes after the first lap so that the marshals could salvage a damaged vehicle. At this point, Larry ten Voorde had already charged from fourth to second place and had settled in behind Marvin Klein. “I took advantage of the fact that Jaxon Evans and Florian Latorre were locked in a battle through the first two corners. This gave me the chance to overtake,” reported the Dutchman.

After taking up the race from second on the grid, Evans was somewhat disgruntled. “Actually, I wanted to reduce my gap to Larry in the overall standings. Unfortunately, that didn’t work,” stated the New Zealander, who currently ranks second overall. Nevertheless, Evans managed to fend off repeated attacks from Latorre over the entire race distance. Ayhancan Güven (BWT Lechner Racing) followed the Frenchman over the line. “After a less than ideal qualifying, I couldn’t really expect much more,” admitted the Porsche Junior from Turkey, who took up the race from the fifth grid spot.

Behind Güven, the two Germans Laurin Heinrich and Leon Köhler took the chequered flag. Both compete for the Nebulus Racing by Huber team. With this result, Heinrich won the rookie classification for the second time in a row. Nicolas Misslin (Lechner Racing Middle East) from Monaco also secured his second straight victory in the ProAm category.

“Gripping races and close qualifying results in the region of thousandths of a second – once again, the Supercup offers plenty of action and variety in the 2021 season. It’s great that spectators are back at the tracks to cheer the drivers on,” said Oliver Schwab, Project Manager Porsche Mobil 1 Supercup, giving a mid-season review.

Next race in Spa

Next up on the Supercup calendar is one of the fastest races of the season: on the Formula 1 Grand Prix circuit at Belgium’s Spa-Francorchamps from 27 to 29 August 2021.

Huge surprise ahead of race four of the Porsche Mobil 1 Supercup on the Hungaroring: Guest driver Marvin Klein turned the fastest qualifying lap in the 911 GT3 Cup fielded by the CLRT team. “I only found out on Monday that I’d compete in Budapest. I’m completely amazed that I managed to post the top time under such circumstances,” admitted the Frenchman, who will take up the race on Sunday from pole position. His teammate Florian Latorre rounded off the exceptional team result for CLRT with third place. The second fastest lap time in qualifying was set by the New Zealander Jaxon Evans (Martinet by Alméras). Points’ leader and defending champion Larry ten Voorde (Team GP Elite) from the Netherlands claimed the fourth grid spot, with the third row occupied by Porsche Junior Ayhancan Güven (BWT Lechner Racing) from Turkey and Germany’s Leon Köhler (Nebulus Racing by Huber).

The CLRT squad, based in the port city of Les Sables-d’Olonne on the French Atlantic coast, is one of the comparatively smaller teams contesting the Porsche Mobil 1 Supercup: In Budapest, the two 911 GT3 Cup driven by Marvin Klein and Florian Latorre are maintained by just two engineers and three mechanics. This weekend, team owner Côme Ledogar is contesting the 24-hour race in Spa-Francorchamps. “And our regular driver Steven Palette is competing at an event in France, so he too wasn’t able to be here,” said engineer and team manager Benjamin Floch, explaining the current shortage of personnel. “That’s why we asked Marvin to drive at short notice. It looks like we made a perfect choice...”

However, neither the Porsche Mobil 1 Supercup nor the new 911 GT3 Cup car based on the 992 generation are completely unknown to Marvin Klein: Last year, the 22-year-old contested the entire season of Porsche’s international one-make cup and ultimately claimed second place in the rookie classification. This year, Klein tackles the French Porsche Carrera Cup, in which the latest generation Cup car is also campaigned. With three victories under his belt so far, the CLRT driver currently ranks second in the standings. “I’m really proud of the team. We didn’t test here at the Hungaroring,” he revealed. “Nevertheless, we’ve made huge progress since Friday’s free practice session.” His teammate Florian Latorre took being beaten by a guest driver in his stride: “I think we have a good chance to bring home a one-two result,” declared the 24-year-old seasoned Supercup driver confidently.

A year ago at the Hungaroring, Dylan Pereira won the Porsche Mobil 1 Supercup race, beating Ayhancan Güven across the line. This coming weekend (30 July to 1 August 2021) the international one-make racing series with the Porsche 911 GT3 Cup returns to Budapest. The Luxembourg racer Pereira and the Porsche Junior from Turkey are determined to repeat their 2020 success. In the three races contested so far this season, both drivers have been plagued by bad luck. As it currently stands, Pereira lies sixth in the points’ standings, with his teammate at BWT Lechner Racing ranking tenth overall.

Last year at the Hungaroring, Pereira and Güven had Dutchman Larry ten Voorde (Team GP Elite) under control with the current championship leader finishing third on the 4.38-kilometre Formula 1 circuit. Even now, the reigning champion does not necessarily have to win. After already scoring two victories in the 911 GT3 Cup, ten Voorde is presently twelve points ahead of New Zealander Jaxon Evans (Martinet by Alméras) in the overall standings. French rookie Dorian Boccolacci (Martinet by Alméras) and Germany’s Leon Köhler, who drives for Nebulus Racing by Huber, are currently tied for third.

“Experience has shown that, after Monaco, the Hungaroring is the second slowest track on the Supercup calendar. The many relatively slow corners demand a very clean, smooth driving style. What’s more, this is our first time competing there with the new 911 GT3 Cup, which is a touch more powerful than the previous Supercup car. Thus, the teams are currently lacking any concrete data for the suspension setup and the rear-wing adjustment. Being careful on the throttle is also important. I’m curious to see which driver will best tackle this task,” says Oliver Schwab, Project Manager Porsche Mobil 1 Supercup.