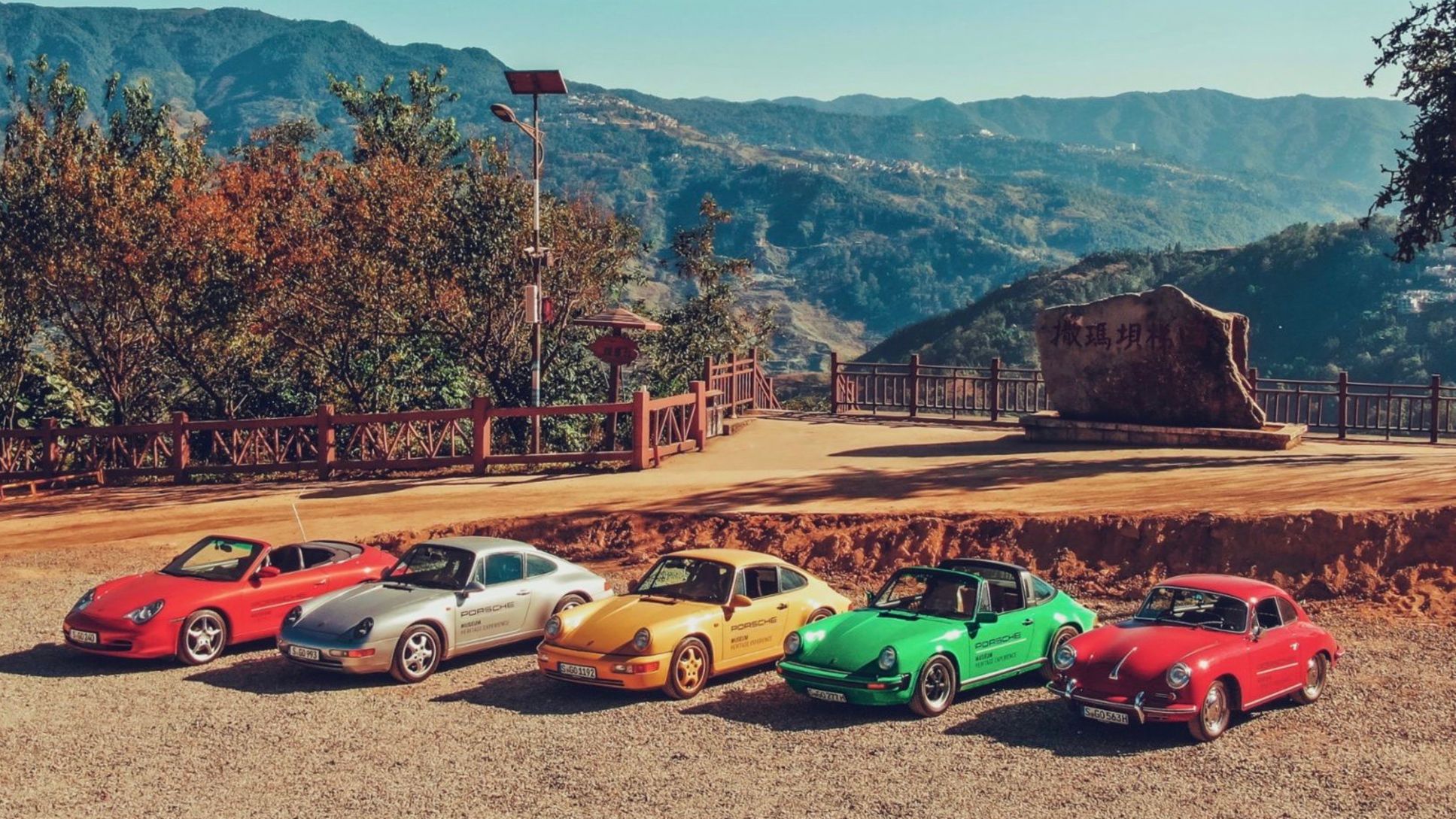 Two thousand metres above sea level is a little-known province that is packed with tradition, culture and rice terraces so beautiful they have UNESCO World Heritage Site status. Before the coronavirus crisis began, the Porsche Museum sent a fleet of historic cars on a fascinating journey to southwestern China ...

The fog ascends the steep slopes, shrouding the historical vehicles from Zuffenhausen in a mystical veil. They are on a journey through Yunnan to carry lessons from the past and present into the future. With more than 47 million inhabitants and covering more than 400,000 square kilometres, this province in southwestern China is larger than the whole of Japan. Bordering Laos, Vietnam and Myanmar, Yunnan represents an extraordinary variety of cultural and geographic differences – from snow-capped peaks and karst mountains to limestone cliffs, jungles and volcanoes.

The first leg of the tour takes the participants – journalists from Asia – to the Hani community, one of more than 50 officially recognised ethnic minorities in the People’s Republic of China. They live in mushroom-shaped houses, built with natural materials such as bamboo, wood and clay, and the roofs are covered with straw, which has a warming effect in the winter and a cooling effect in the summer. Their ancestors in southern Yunnan built rice terraces into the steep slopes of the Ailao Mountains some 1,300 years ago. These masterpieces of landscape architecture are reminiscent of artful drawings in violets, greens, yellows and blues.

The hospitable locals carry on the tradition to this day, passing down their knowledge from generation to generation. The Hani people’s rice terraces in Honghe have been a UNESCO World Heritage Site since 2013. Over the centuries, sophisticated irrigation systems using bamboo pipes and small ditches were developed. The Hani still live with and from nature. Fish farming is also integrated into the rice cultivation system. They swim in the terraces, eating weeds, pests, and grasses and providing natural fertilisation.

Li Zhou of National Geographic Traveller tells of the song with which the Hani welcomed their visitors, a song that is included in UNESCO’s list of Intangible Cultural Heritage. The song is in a language in which there is no word for “war,” because community cohesion is an existential necessity for the people who live in the steep mountains. The province of Yunnan is like a concentrate of extraordinary features. For Zhou, the colourful Porsche models are a perfect fit: “To me, what was so outstanding about the trip was the concept of placing historical vehicles in a context with traditional customs.”

The competition among attractions is fierce in the region with its many World Heritage sites, including the three parallel rivers in the mountainous to the north west. Without ever meeting, the Yangtze, Mekong and Salween rivers run for more than 300 km from north to south through deep gorges, past 6,000-metre glaciated mountain ranges. Some 500 km further southeast lies Lijiang, with its enchanting old town, which has been a UNESCO World Heritage Site since 1997. Winding alleyways, traditional architecture, small streams and canals – and around 350 bridges. The door panels adorned with elaborate carvings represent the culture of the Naxi, another recognised ethnic minority.

Kunming – the “city of eternal spring”

The capital of Yunnan, by contrast, is a pulsating city of millions. Kunming sits at a stately 1,892 m above sea level on the East Yunnan plateau and stretches along the Dianchi, the largest freshwater lake in the province. Due to its relatively mild climate, Kunming is also known as the “city of eternal spring”. It is the biggest centre of flower production in China, and known primarily for azaleas, orchids and primroses. Mechanical engineering, electrical engineering and metallurgy – including copper production – are important economic sectors in the region, alongside the agriculture. Visitors who look skywards will note the many solar heating systems on the roofs: residents here cover up to two-thirds of their hot water requirements with state-of-the-art systems. In the city centre is Green Lake Park, an urban park more than 50 hectares in size, where traditional bridges connect four lakes. Originally a water reservoir for the city, the park is now a place for walking, making music and relaxation.

Preserving, opening and conveying culture – that’s Porsche’s mission on this trip as well. With its sports cars, the brand created a unique driving culture that it now spreads all around the world. “Giving so much weight to heritage without standing still could be one of the secrets of Porsche,” writes Lei Yu in his coverage. Five models from the company’s collection are traversing the southern tip of China on this tour of discovery: a Porsche 356 B 1600 Super 90 Coupé and four Porsche 911 models from different eras.

Participant Kiwi Zhou reflects: “The road winds through the terraced fields for a long time. It is almost indescribable in words what it feels like to drive a classic car, with vibrant Porsches in front and behind you whose colours mesh so harmoniously with the landscape of Yunnan.” Especially impressive is the stop at a scenic viewing point, where Koko Tang gives insights into the traditional life of the Hani. The 35-year-old managing director of Yunnan Vinetree Tourism serves as a cultural representative responsible for the preservation of Hani culture. Originally from Yunnan, Tang went on to work in New York and later Africa, where she encountered tent cities that inspired her to open a hotel group with tents back at home.

Tang explains to the tour group how important the topic of sustainability is for the Hani, how her team builds their hotel tents beyond the mass tourism industry, and leaves each place as if travellers had never been there. Culturally sensitive and environmentally conscious, Tang calls it “ecotourism with wild historical roots.” It follows the Chinese worldview of Daoism, according to which humans cannot exist independently of nature and regard it as the highest source of wisdom in all existence. At the end of the stop, Tang asks the participants to look into the distance: a single moment unites four and a half thousand picturesque rice terraces, wrapped in a sea of clouds like cotton balls.

Locomotion as a means of cultivating culture

The group continues on its travels. Locomotion as a means of cultivating culture – it’s about intensive experiences and value preservation, about actively living tradition and exchange. The participants practice the art of bamboo weaving and catch fish for dinner with their hands in the rice terraces. They also beat rice porridge using traditional techniques and bamboo tools. But the most important part of this trip is the fact that, as journalists, they will share their experience – share this intercultural encounter – with the world.

With the Heritage Experience, the Porsche Museum has created an innovative format that focuses on topics such as identity, respect, and cultural sensitivity. The aim is to experience and learn from other cultures. Prior to the coronavirus crisis, the Heritage and Museum department’s new program provided journalists with unforgettable insights into history and culture. The vehicles from the company’s collection form the link between the two and initiate dialogue.

In this way, the Heritage department promotes culturally diverse reporting and sharpens understanding of Porsche’s origins. The second edition of the program is planned for the USA in mid-October 2021.

Ties That Bind – the Ingram family and their magnificent Porsche collection

Two generations, one passion: a visit to the Ingrams and their magnificent Porsche collection in North Carolina. A story about passion for the brand – and the worst thing that can happen to a collector.