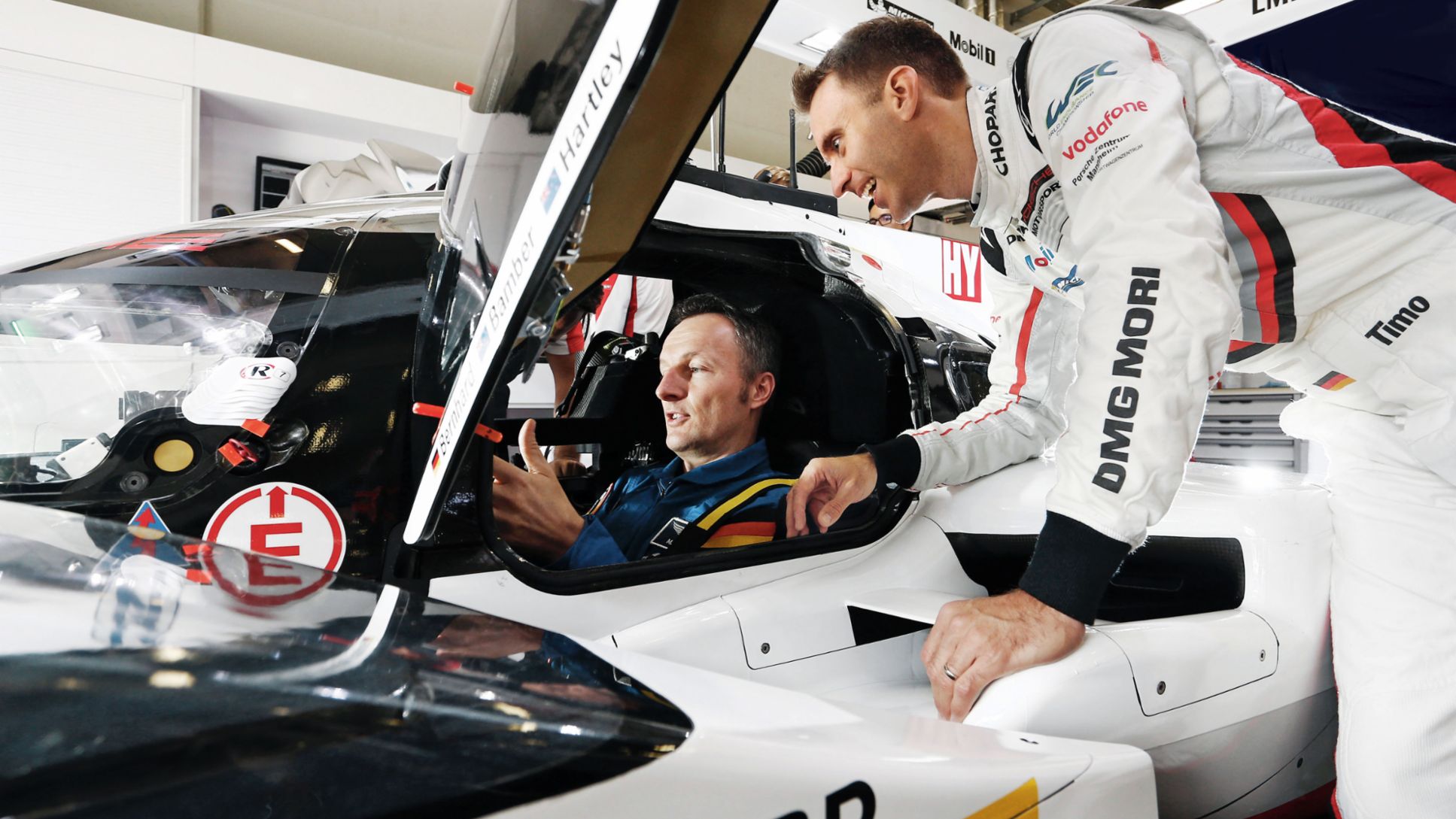 In Saarland, people often look up to the sky. The reason is the military jets that train their flight manoeuvres over the small German state on the border with France. Matthias Maurer and Timo Bernhard grew up with this local custom of gazing at the sky. Fascinated, always, by technology and speed. One is an astronaut, the other a racing driver. Their careers are both defined by perseverance, exacting personal standards, physical fitness, and working in international teams of roughly the same size. They both know what it’s like to rely on the accuracy of technical preparations; both have to withstand high g-forces. In both professions, radio contact to the engineers is a lifeline to survival.

Zero to 28,000 km/h in 10 minutes. This is the acceleration that ESA astronaut Maurer is looks forward to. He  experienced it in the Crew Dragon capsule from SpaceX – on the tip of a Falcon 9 rocket. Around him were hundreds of tons of highly explosive fuel. The start, back in autumn 2021, was a ticklish part of the mission. Roughly 24 hours later, he began his duties on the International Space Station (ISS). Maurer spent the lion’s share of his days working.

Each astronaut conducts between 100 and 150 experiments during their roughly six-month stay on the ISS – and in the tightest of spaces. Maurer holds a doctorate in materials science. His favourite activity is creating new metal alloys in weightlessness, for instance to make motors or solar cells more efficient.

And he himself is also a subject of study. At the start of his mission, Maurer was 51 years old. In the half year he’ll spend at the space station, his bones will age 30 times faster than on earth. “We humans are not built for weightlessness,” he says. “The musculature and the immune system deteriorate, and I will develop eye problems.” The optic nerves can be compromised. To keep fit, two hours of exercise are on the agenda each day. The objective is to find out how people can stay healthy in space – how they can live on the Moon and, from there, travel onwards to Mars.

Maurer applied to be an astronaut with the European Space Agency (ESA) in 2008 and was one of 8,500 candidates. “I was a scientist and I saw the opportunity to work with the best technology as part of an international team – and I was also attracted by the adventure of it.” He would have to wait, though. He was only admitted to the European Astronaut Corps in 2017. He has learned how to take his own blood sample and pull teeth; he has mastered survival training in caves and underwater. He learned English, French, and Spanish as a student; now he’s added Chinese and Russian for crisis-proof communication with his international colleagues.

Matthias Maurer and Timo Bernhard met in the Porsche pit at the Nürburgring in 2017. They quickly delved deeply into each other’s respective métiers. A drawing he did as a child offers irrefutable evidence – Maurer had wanted to be a racing driver. Bernhard, meanwhile, had at the age of four declared to his father and his buddies – recreational racing drivers all – that he also wanted to race cars. “‘But not just for fun like you guys,’ I said,” recalls Bernhard with a laugh. “I want to be successful and earn money!” added the now 40-year-old at the time. And he never let up. Kart, Formula racing – his parents sensed his ambition and never let on how tight the money really was.

Starting in 2012, he was the first driver to grapple his way into the Porsche project to return to the top category of endurance racing. He experienced all the development setbacks with the futuristic Le Mans prototype, the Porsche 919 Hybrid. Being a team player and putting your own ego on the back burner aren’t just prized at the ESA – they’re also qualities that characterise Bernhard.

In 2014, 2015, and 2016, overall victory for Porsche at Le Mans seemed within reach for Bernhard. He finally scored the win, with tears in his eyes, in 2017. He was a first-rate athlete throughout his entire career. He also doggedly worked his way into the technology so that he could be even more involved in improving the cars. Racing drivers are also human data recorders for engineers. Open books every inch of the way. In 2018, he drove the 919 Hybrid Evo, a further evolution of the racing car, to a world-renowned lap record on the Nordschleife of the Nürburgring: 5:19:546 minutes. “It was the most dangerous thing I ever did in my career,” he admits.

“Early on, it was the pure joy of the physics of driving,” says Bernhard. “Mastering a kart, drifting, getting faster. Then the competitive part came into play. The third and most important aspect was a later insight: the will to advance technology.” Very few people are aware, he says, of what they owe to motor racing. The quality of their brakes, for example; safe plastic tanks; fuel-saving and performance-enhancing aerodynamics; efficient turbochargers; or sophisticated energy management in hybrid and electric vehicles. “With the Porsche 919 Hybrid, we advanced into the 800-volt technology that would reach series maturity in the Porsche Taycan. In Formula E the cars are all-electric and in the Porsche Mobil 1 Supercup we test renewable fuels. Motorsport takes responsibility for technological advancement.”

Testing technology for the future is also what drives Maurer. He points to the satellites – the ‘eyes’ with which we observe our planet – which enable weather forecasts, navigation and communication. “But the most sustainable product from space exploration is the use of solar energy. We created this technology in space and continue to develop it there.” And then there’s this: “From orbit we can see how thin the blue line is that forms the climate of our Earth. We have to protect it better!”

Moon mission the next goal

Races – running, on horseback or in a vehicle – are as archaic and constant a feature of human society as that which first moved Maurer: “We humans have always looked to the sky and wanted to understand the universe. We can learn from the Moon, that part of the Earth that lay untouched for four and a half billion years.” He hopes that in a later mission he may set foot on the Moon himself. “By the end of this decade,” he predicts, “people will land there again. And this time we will be coming to stay.” The aim will be to generate air, water and fuel from lunar sand. Later, the methods will be used on Mars. “A return journey to Mars lasting at least 500 days would make no sense if people were not in good condition when they arrived and a spacecraft were only able to carry the absolute necessities of survival,” he elaborates.

Recklessness is not considered a positive attribute in either astronauts or racing drivers. Calculated risk is the operating principle. “It’s important,” says Maurer, “to experience my physical limits in training in order to avoid doing so if worst comes to worst. I’m supposed to function as a researcher, after all.” For the start and landing, he relies on experience. “The capsule can withstand even an uncontrolled, ballistic re-entry into the atmosphere. Although in that case we would briefly have to withstand up to nine or 10 g. Usually it tops out at 3.5 to four g. Timo would face higher forces during braking and, above all, with lateral acceleration in corners, which regularly reach up to five g.” He will feel quite safe on the ISS – everything is monitored and controlled. But a spacewalk? “That definitely takes some courage,” he says. “There’s just three millimetres of plexiglass between me and certain death. Colleagues have told me about the moment when they opened the hatch and they experienced a fear of falling, which of course in weightlessness is absurd. But if you lose the umbilical cord to the station, you’re space junk.”

Bernhard, too, was always conscious of the risks. “I was no daredevil driver. My style was more to go easy on the material and drive strategically. But for the Nordschleife lap with the 919 Evo, I definitely needed all the courage I could muster. No one had done that before. There was simply no script.” He describes the undertaking as old-school track meets high-tech racing car. Top speed: 369.4 km/h. “The tension was extreme,” he concedes. “I had prepared myself super meticulously with the team, threw everything into the lap, and was practically in a daze afterwards.” His senses were maxed out. But even in those exceptional circumstances, he kept his wits about him: “Reducing the absolute limit of the possible by one per cent cut the risk in half.” It was precisely for that capability that Porsche chose him as the driver.

What happens when the greatest goal has been achieved? Maurer has seen colleagues who fell into a hole after a mission – who had become addicted to the thrill of the next mission. “I’ll face that situation of needing to find new goals as well. I’m curious to see how that experience will impact me.”

Bernhard ended his driving career “when I sensed that I had reached my zenith.” He feels fulfilled in his new role as a Porsche brand ambassador for forward-looking technology and electromobility. He passes on his experience, supporting young prospects on his own racing team. In 2018, he gladly accepted Maurer’s invitation to visit the training centre for ISS astronauts in Cologne and got to know the ISS modules. Bernhard’s enthusiasm made an impression at home as well: his eldest son – Paul, who is eight – wants to be an astronaut. Father and son want to travel to Florida to witness Maurer’s launch into space. Matthias Maurer and Timo Bernhard have the same message for young people: stay curious, listen to your heart, and don’t be intimidated. Only those who have dreams can make them come true.