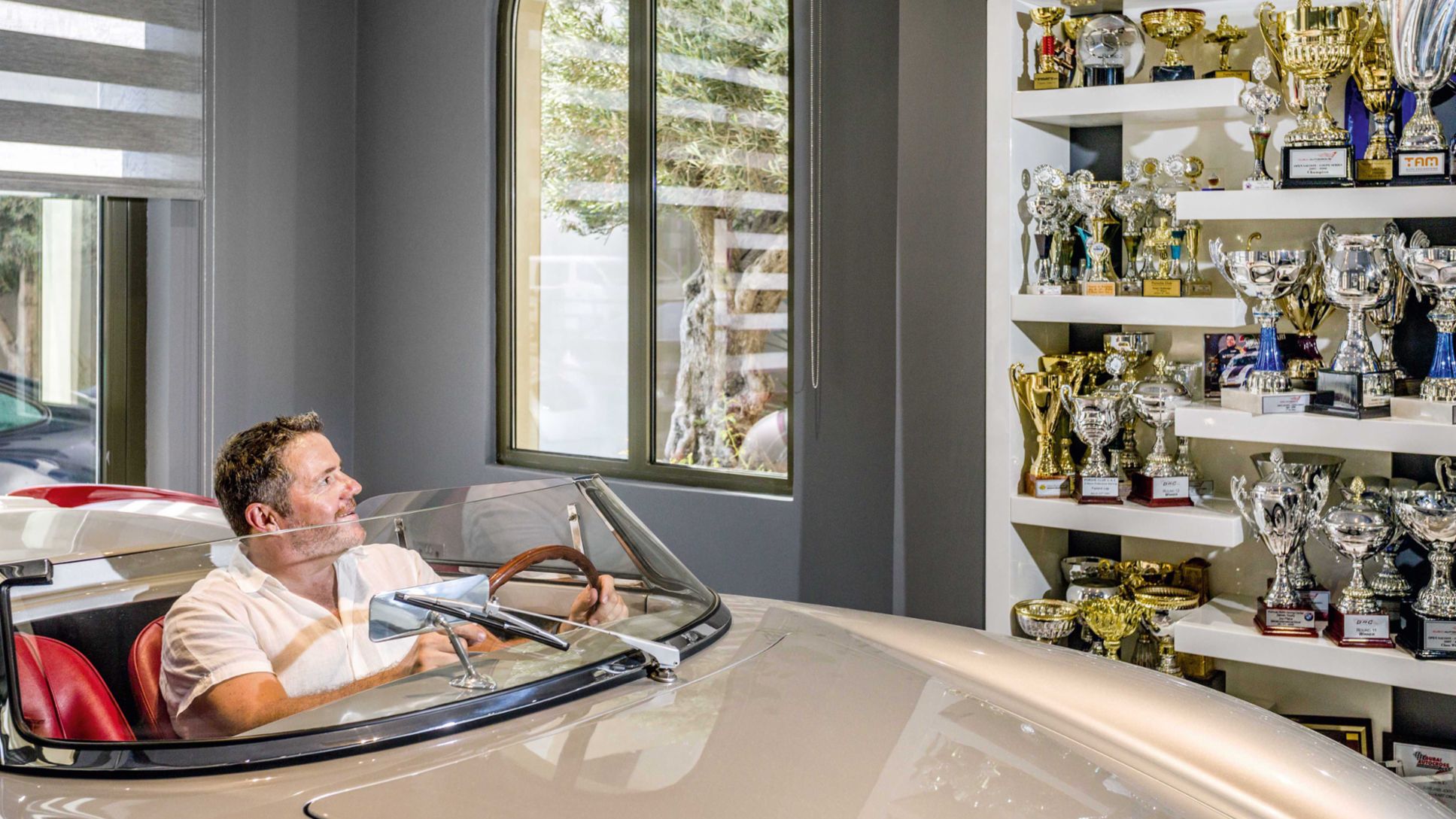 In the United Arab Emirates, Karim Al Azhari acts as an ambassador for the brand from Zuffenhausen. He is a collector, racing driver, and president of the Porsche Club.

One hour after sunrise: oppressive desert heat sucks thousands of liters of seawater from the Persian Gulf and distributes it through the atmosphere as a fine haze. The skyline of Dubai City protrudes out of a misty dome that gives the morning light a milky, golden shimmer. On the artificial island of Palm Jumeirah off the coast of Dubai are rows of sparkling blue swimming pools and sand-colored villas. We slowly roll up to the forecourt of one of the properties, where our host, Karim Al Azhari, is already waiting for us. He quickly takes us inside to the cool interior of his villa.

“I’m probably not the classic Porsche fan: someone who only likes, loves and lives Porsche.” It is a surprising start to our conversation with Al Azhari, sitting in his living room – soft carpet, expansive sofa. And the surprises don’t stop there, as he speaks perfect German. As the son of a Syrian entrepreneur and a German mother, he spent the summers of his childhood in the German state of Hesse. The founder and chairman of the Porsche Club UAE pauses briefly, fully aware of the effect of his first sentence: “I admire perfect technology: its beauty and its meaning. Clear function and the wonderful feeling of precision and intelligence. Porsche offers the perfect combination of all those elements. I have never come across a car better than a Porsche. It’s as simple as that.”

That realisation must have set in early on: Al Azhari bought his first Porsche at the age of 16. That sounds a lot like a special fan; one who loves and lives the brand. You can hear the heartbeat behind the logic. And the fine wit that Karim cultivates. So, why don’t we check out his Porsche collection? Not yet. First of all, he wants to show us how he lives.

Desire for performance and success

Our host takes us on an entertaining journey. Past doors made in Germany with specially etched glass (“... three lines for my sons ...”), a floor-to-ceiling panoramic view of palm trees, sandy beaches and ocean waves, and then through a final door: “I also have other offices, but mostly I work here. I like my freedom.”

In the side wing, he has accommodated his home office. The floor is covered with silkily shining porcelain tiles in a flamed marble look; the walls are painted dark; the windows feature round arches in an Arabian style. This is not only where the 48-year-old manages his companies in the construction industry and real estate development. The room is clearly also the workplace of a racing driver. Hundreds of trophies are clustered together on floor-to-ceiling shelving. Al Azhari heads to his very own “wall of fame”, picking out one or two trophies: “I started with karts and have been racing in all sorts of classes since 2006. Touring cars, the Porsche Cup, endurance racing – I also know the Nürburgring Nordschleife very well.”

His pride is matched by his serenity. He enjoys high performance and success – but doesn’t show a hint of arrogance. Al Azhari crosses the room and sits down behind his desk. “Isn’t that a great view that I enjoy every day? On the opposite side of the courtyard are my Porsches; in the evening I turn on the light over there and ... well, it’s showtime.”

But it is still not time to take a look at the cars. First this collector wants to explain that he bought his first Porsche 944 as a student in the US: “It was something so special in my native city of Abu Dhabi at that time that I really wanted to have that car.” From then on, he drove one Porsche after another. “I was and still am amazed by these cars. Each one has its own character. They are very different and I was eager to get to know each one.”

The Porsche Club UAE was founded in 1998, making it one of the oldest automobile clubs in the United Arab Emirates. Al Azhari is its passionate president. “It’s not just about owning a Porsche, but also about experiencing and understanding the cars. We organise drives, multi-day rallies, driver training – we are an active and very close community that is constantly growing. The group is very lively!” Encouraging, coaching, passing on knowledge and passion – those are Al Azhari’s natural talents. He is an engaging character.

But now he is heading towards the door. Towards his treasures. The highlight of a very special house tour. We go out into the courtyard, battle through a humid wall of sweltering heat, and find refuge in the garage on the other side.

There we stand between a Porsche 911 (991) GT2 RS and a Carrera GT, then duck under a 911 (930) Turbo Flachbau and another 911 (964) Turbo, which float under the roof on elegant hoists. At that point, even the temperature outside cannot hold us back and we pay a visit to the other models outdoors, listen to the story of the dark-blue 911 Carrera RS America, are touched by the eventful history of the white 993 Turbo with its red leather interior, and discover his number one – the 944 Turbo, which Al Azhari still drives as a daily. But not today.

Today, it is the Carrera GT and the 911 GT2 RS that take us for a ride through Dubai City. We leave the courtyard, sneak past the neighbours’ houses, and then really step on the gas for a few seconds in the tunnel to the outer breakwater ring around Palm Jumeirah. A 10-cylinder blazing fire of soundwaves from the exhaust, a sawing, whirring crescendo. Before long, Al Azhari hits the brakes. You don’t want to overdo it. Emotion is followed by reason – with him, the two go hand in hand. That’s exactly how he made the move from racer to instructor and back: “I’m always thinking. About driving. About the car. About the line and forces and torques.”

He completed his official instructor course at Porsche in Germany. Now he teaches Porsche fans in the Emirates how to drive quickly and confidently on racetracks: the driving training is an important part of the club calendar: “I’ve sat in the car with so many people, given them tips. Some say that it was only through me that they learned what real driving is.” This relationship with other people is just his thing: he enjoys their happiness when new things become possible.

Afternoon comes, and we are back at the house. School is out; Al Azhari’s boys are there. Violeta, his wife, picked them up in their Panamera. “We met and fell in love during a birthday party of my brother Anwar,” our host says happily. The lady of the house smiles and then leaves her men to it. Karim and his three boys – he calls them his gang. The close bond the four share is obvious.

In Adam, Enzo, and Keanu, the next generation of enthusiasts is growing up. Their father is also their instructor. But not until tomorrow, when they will get back in the karts again. Today, a pair of swimming trunks is all they need. Splashing, the boys glide through the pool. Dubai’s skyscrapers are tickled by the sun as it slowly dips into the Persian Gulf. At the end of this long day, we realise that Al Azhari is not just an extremely passionate Porsche fan. He is also a very smart conversationalist.

Text first published in the Porsche magazine Christophorus, No. 401.