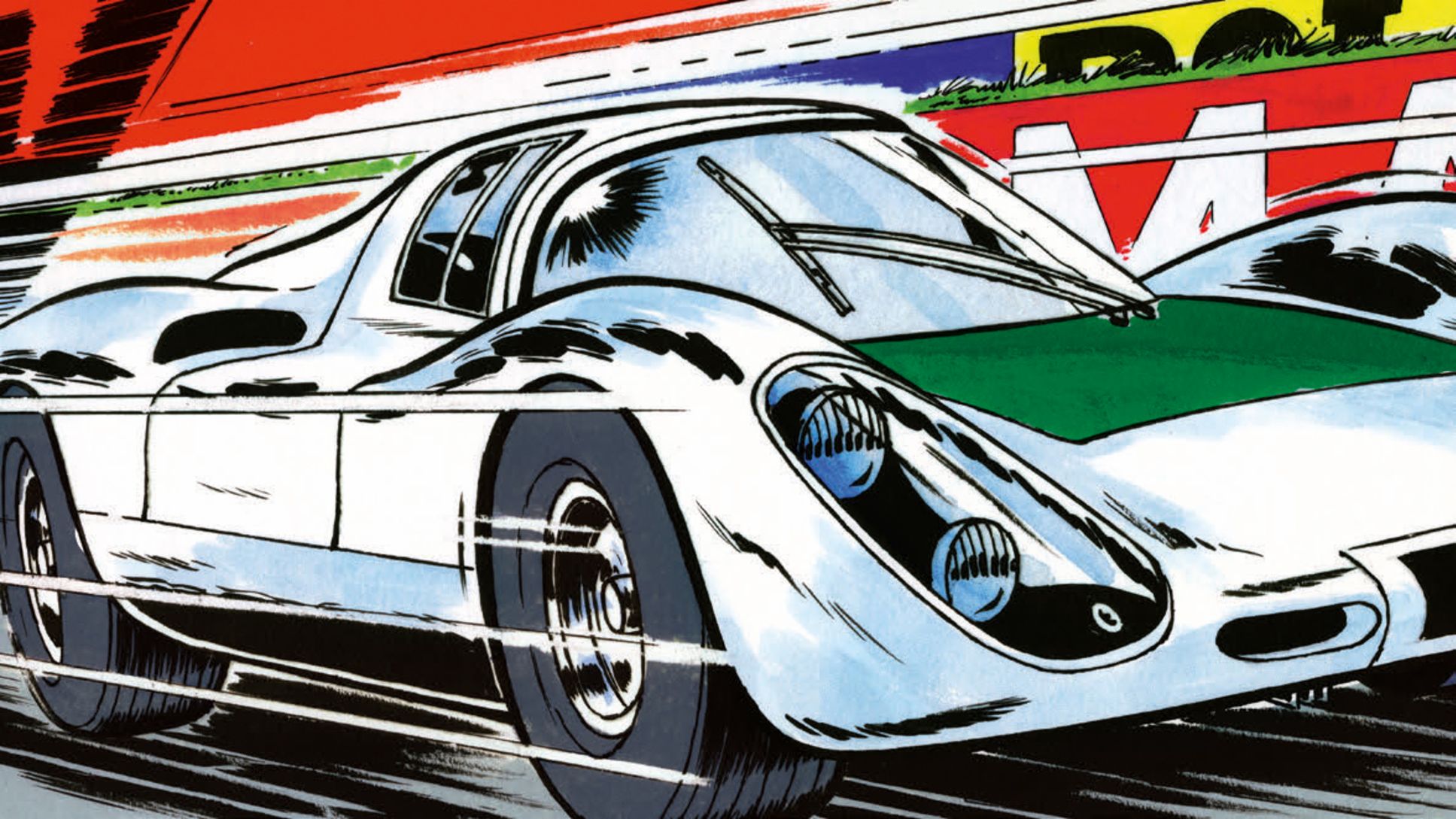 Bonjour, Michel Vaillant! The comic idol has been winning races for over sixty years. Vrrrrroooooom! His creator, the Brussels-based French artist Jean Graton, invented an entire family cosmos around its protagonist and gave the world the Vaillante car brand to boot. A story that echoes through real life: the plot of Michel Vaillant is closely linked to the life of Philippe Graton, son of the famous comic author.

The roots of the heroic epic of Michel Vaillant stretch back to the 1950s. As a young man back in the day, Jean Graton was crazy about motorsports. But racing, for him personally, was out of reach. He didn’t have the money or possibly the talent. But he drew like a world champion, and through his job at an advertising agency, found his way into the world of comics—a universe in which anything is possible. Graton created Michel Vaillant in 1957, and suddenly the real world of motorsports opened up to him.

Every adventure experienced by Michel Vaillant became its own little epic. Every drawing was as refined as a piece of pop art—just more exciting. Vrooaarppp. Vroaaammm, Iiiiiii. Shhaa, Bang, Tchak. The shouting letters—in French, les bruitages—infuse the images with tempo and transfer the eardrum-bursting commotion of the racetrack to the otherwise silent paper. Graton created a captivating yet tidy world of attractive people and even more attractive cars. Although every single one of the racing machines driven by Michel Vaillant is an aesthetic object, Jean Graton never dreamt of a career as a car designer. As a comic author, he was as happy as a kid in a candy shop.

Graton’s son Philippe inherited his father’s keen eye for beauty and the knack for compelling stories, but not his drawing talent; besides, he had other plans for his life. He became a photographer and journalist, following his own path, until “my father suddenly had no publisher. A catastrophe. That was in 1981. He had earned well, but he had also lived well,” says Philippe with a winking nod to the upscale restaurants and hotels that serve as a backdrop in every Vaillant comic. Fans chuckle over the Guide Graton, which, not coincidentally, strongly resembles the Guide Michelin.

Vaillant soon became an all-consuming responsibility for Philippe. The son took over the business end of things—all the stuff that wasn’t up Jean’s alley. “I was busy with that twelve hours a day,” says Philippe, looking back at the founding of the publishing house around the family’s kitchen table. Later, he became involved in content aspects as well: “I did research with car manufacturers, teams, and drivers and wrote the scenes. My father continued doing the drawings.” As age began to wear on Jean, Philippe gradually took on the entire business—with the exception of the drawings, which was the domain of the illustrators and draftspeople he hired. But the familial structure would eventually prove a handicap. As Philippe notes, “We were authors who only became publishers by accident. With seventy titles under its belt, Michel Vaillant deserved to be professionally marketed.”

Philippe Graton had grown up with Michel Vaillant, rather like having a two-dimensional brother: “My father created Michel in 1957, and I was born in 1961—we were the children of a dedicated family man.” Perhaps that’s why Michel Vaillant is a comic about an entire family, whose worldview was initially rather conservative. “The timeline began with a father who owned a small car company and a son, Michel, who raced in America, which at the time still seemed like the other side of the world. David against Goliath. There was something at stake. It was dangerous, exciting. Vaillant won Le Mans, later a Grand Prix, and he even won the world championship title. Meanwhile, the Vaillante factories were growing ever more gigantic. The story definitely has some parallels with Porsche,” says Philippe Graton. In the comic, the wishes of father Henri were not to be trifled with. The eldest son, Jean-Pierre, became an engineer in the Vaillante plants. Michel became a race-car driver and brand ambassador, while Françoise sacrificed her career as a journalist to be Michel’s full-time wife.

“Vaillant is a comic and documentary rolled into one,” says Philippe Graton, explaining what he views as one of the keys to its success. “In terms of the storylines, the imagination can run away with you at times, but the cars, the drivers, the racetracks, and even the advertising placards are always true to life. Weaving together fact and fiction in such a manner is unique.”

There was just one exception: although racing was incredibly dangerous in those days, in Vaillant no one ever dies in a crash. And even the bad guys are never entirely bad—they just never win. Even Michel doesn’t win every time. “Credibility is critical.”

The year 2012 brought life-changing character modifications in the second series of Michel Vaillant. Philippe Graton was running out of clean-cut ideas for the series’ figurehead. “Michel was clever and above reproach, but he was also holier-than-thou. He was a bit of a Goody Two-shoes. I thought to myself that if I wasn’t enthusiastic about him anymore, the readers probably weren’t either.”

Moreover, cars no longer embodied attributes like freedom, verve, and intoxicating speed as they did back when the Vaillant saga began. So in the 2010s, Michel evolved into a hero “who thinks in a more modern way, who wrestles with the odd doubt, and sometimes even makes mistakes.” New drive technologies like electricity and hydrogen also found their way into the comic world.

In keeping with the new spirit, new illustrator Benjamin Benéteau brought a much more dynamic drawing style. Jean Graton’s visual language couldn’t be copied anyway. “Fortunately my father liked the changes. At the time, cartoonist Hergé wanted his Tintin to die with him. But my father gave Michel eternal life instead. And just as father Henri Vaillant in the comic placed many demands on his son, my father made demands of me as well.

In late 2019 things came full circle. Vaillant’s small company, formed around the kitchen table, was subsumed under the umbrella of Paris publishing house Dupuis, and manager Jean-Louis Dauger was the ideal man to usher Vaillant into the future. Dauger’s special qualification: he knows racing. And he, like Benéteau, also had a sports car from Zuffenhausen in the garage—the illustrator drives a Porsche 718 Cayman, Dauger a 1994 Porsche 911 Carrera 2, generation 993.

Dauger deftly crafted a link to reality. He had Swiss race-car driver Alain Menu slip into the role of Michel Vaillant. And Menu, in the guise of Vaillant, did the comic hero proud with a convincing win in the Portuguese stage of the World Touring Car Championship in 2012. In 2017 two real-life Vaillantes actually started in the 24 Hours of Le Mans. And Dauger brought the sex appeal of the Vaillant world to watches, helmets, apparel, and other articles. “There are endless possibilities,” he says, “because Vaillant is about more than just motorsports. It’s about people, family, and even business in a fast-changing world.” But the most sought-after articles remain the artful comic drawings from the early days of Michel Vaillant, ideally in the form of wall-sized limited editions. Their size adds another visual dimension to the greatness of Jean Graton—as a person, as a romantic fan of racing, and above all, as a man of art.