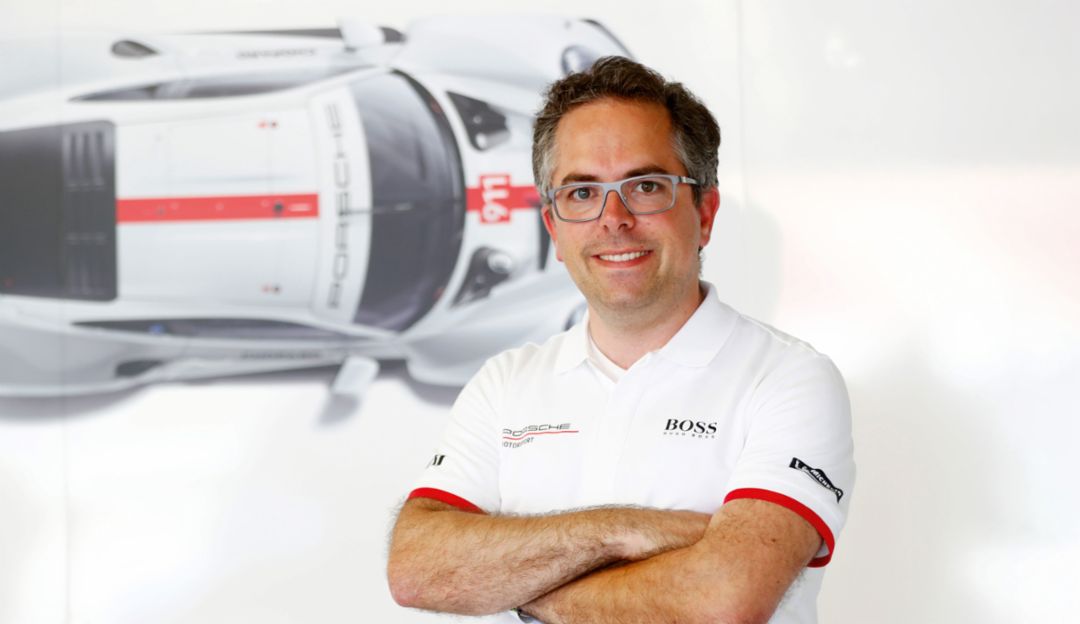 In an interview, Pascal Zurlinden, General Project Manager Factory Motorsport, reports how the drivers keep fit in the race-free time, what challenges the postponement of numerous races brings with it and why he is excited about sim racing.

Pascal, what is the situation at Porsche Motorsport during the current coronavirus phase?

First and foremost, the health of our employees, their families and our partners takes top priority. However, work still continues at Weissach, although many of our engineers are working from home. Development work on our factory projects continues. In some cases, the motorsport engineers support their production colleagues in developing road-going cars. We can’t yet predict when real motor racing will resume on the racetracks. At the moment we’re sitting in the passenger seat and simply have to wait for further updates. However, once we get the go-ahead, we’ll be perfectly prepared. The situation is a bit different at the moment in regards to supporting our customer sport programmes. Without race events, the demand for service and spare parts has, of course, reduced significantly.

How will motorsport continue when the crisis is over?

Motor racing is a fundamental part of Porsche’s DNA. We are the only manufacturer that has raced factory or customer cars every year at Le Mans since 1951. Porsche pursues motorsport as a matter of principle. This won’t change. We can’t yet say how the whole motor racing landscape will look after COVID-19.

Many companies are currently learning to appreciate modern ways of communicating such as by telephone or video conferencing. In the long term, this may also lead to a rethink. Will Porsche Motorsport increase the use of such tools once the coronavirus crisis ends?

We’re finding that such methods can be very efficient. Not every video conference can replace a face-to-face meeting, but I suspect that in the future we can create more opportunities to work from the home office. I’m doing a lot of work from home at the moment. It’s no problem at all to maintain a lively exchange with engineers or drivers. I think to a certain extent that the working world will be changed permanently due to the modern tools and the experiences that we’ve now had.

How do drivers keep fit during this race-free time?

We ran a fitness camp in February and saw that our entire driver squad are in peak form. Our doctors and physiotherapists have drawn up individual programmes for each driver. Based on this, the drivers do their workouts at home to maintain their fitness levels as best they can. They have to do this because when the racing season resumes we will face some very intense months.

The postponement of numerous races, including the two 24-hour races at Le Mans and the Nürburgring, means there will probably be a large number of events in the second half of the year – often with overlapping dates. How will Porsche Motorsport handle this?

We’re in close contact with those responsible for the racing series and with the FIA motorsport governing body. At the moment, each racing series is trying to find a solution to contest as many of the planned races as possible later this year. Naturally, there will be conflicting dates. The situation changes almost daily. It’s not yet clear how many events can still be held this year. But in this regard, I’m sure that individual racing calendars will be well coordinated. We are in regular contact with our fellow competitors. We’re all in the same boat. Here at Porsche, we often talk about our motorsport family. These days, however, it’s becoming even more apparent that motorsport is indeed like a family – quite independent of the brands and the competition out on the racetracks. One thing is now certain: As soon as racing starts again, fans will be treated to plenty of action – weekend after weekend.

How serious is the cancellation of the Le Mans pre-tests without an alternative date?

We’ll contest Le Mans for the first time this year with the new Porsche 911 RSR-19. Obviously, the pre-test would have helped with preparations, but we’ve already familiarised ourselves extensively through running the new car in the FIA WEC and North America. Hence, we have a wealth of information that we can analyse in even more depth during this race-free time. We don’t expect it to result in a competitive disadvantage. Corvette is also fielding a brand-new car. All the other rivals have to adjust to a new generation of tyres – so we’re all in a similar situation this year. However, there are a few unanswered questions. For instance, pushing the Le Mans 24 Hours to September raises completely new challenges regarding the climatic conditions. Being late autumn, we’ll have to race longer in the dark compared to the original June date. But again, we’re all in the same boat.

The Formula E project is currently under an enforced break. Since March Formula E races have been suspended for an indefinite period. It is currently unclear whether races will be able to take place. What is Porsche Motorsport's position and what does it mean for the TAG Heuer Porsche Formula E Team?

We fully support the decision made by the FIA and Formula E to temporarily suspend the Formula E season due to the spread of the coronavirus. Gaining experience is of critical importance in the rookie year of the TAG Heuer Porsche Formula E Team and naturally, we regret that the scheduled Formula E races have had to be suspended. However, as already mentioned, the health of our employees, the Formula E community and people all around the world has the highest priority. We hope that the situation will soon improve. In principle, we would welcome catching up on the races suspended so far, or holding double-headers, provided Formula E and the FIA believe this is possible. However, preparations for season 2020/2021 cannot be allowed to suffer and have high priority for us.

In professional football, some clubs are reducing their players’ salaries. Will Porsche do the same with its drivers?

No. If the 2020 motor racing season starts again after the crisis, our drivers will be very busy. Their work hours will be no less than in other years. On the contrary: The stresses will be huge, so we won’t reduce our drivers’ salaries.

Has Porsche made any cuts to its motorsport programme?

No, we’ve not cancelled any of our motorsport programmes, but of course we’re all required to keep our costs as low as possible. We’re already extremely efficient at Porsche Motorsport and we’ll step up our efforts in this regard.

Manufacturers in motorsport rely on functioning supply chains. Special materials such are carbon are becoming scarce, because supplies from Italy are currently not available. How is the situation at Porsche?

We’re not testing at the moment, we building hardly any new cars, and customers are ordering fewer parts during the race-free times. This means that the demand for such materials is lower than usual. Our warehouses at Weissach are well stocked, so we have no problems at all in this regard.

As a response to the current coronavirus crisis, the Porsche Mobil 1 Supercup will head into the motor racing season with a digital series.

Without real races, the Porsche Mobil 1 Supercup is currently being run as a sim racing series. What are your impressions?

We’re very excited about the response and the level of sim racing. Parallel to the TAG Heuer Porsche Esports Supercup, we’ve recently launched the Porsche Mobil 1 Supercup Virtual Edition in conjunction with iRacing. It’s fascinating to see how the drivers in our squad stack up against the world’s best sim racers. Moreover, we’re offering a great platform to our teams and drivers from this international one-make cup to make this race-free time interesting for their fans and sponsors. Our Porsche Mobil 1 Supercup staff is currently liaising between the actual Supercup teams and drivers on the one hand, and the sim racing scene on the other. This works brilliantly.

The drivers of the TAG Heuer Porsche Formula E Team, Neel Jani and André Lotterer, start at the ABB Formula E Race at Home Challenge. The Esports races will take place on probably nine Saturdays (start: 18/04/2020), featuring all drivers and teams. How does Porsche view this Esports series?

Esports provides a good opportunity for the Formula E drivers to compete against one another during this period without any race events. Sim racing is currently enjoying a boom. It is therefore a positive step for Formula E to get involved here. Overall, Esports enables us to make contact with the young target audience that is at home in the digital world. It also strengthens the team spirit within the Formula E community in these challenging times.

Because of the coronavirus problem, there are delays in announcing any future technical regulations in the FIA WEC. Does this have any potential effect on Porsche’s interest in the new prototype platform LMDh?

I think we’ll have more detailed information about the future regulations in the next few weeks – the delays won’t be too long. We’ll only go into a detailed analysis in-house after receiving the announcement. Our R&D board member, Dr Michael Steiner, has given a clear mandate to look carefully at these rules.  We’ll take a look at how interesting LMDh could be for us and how much effort it would require. Porsche is interested, of course, in being able to compete for overall victories, for example at Le Mans and Daytona, but that shouldn’t be misinterpreted. We still have no decision as to whether we’ll implement an LMDh works programme in the future.

If Porsche were to decide to design a prototype complying with the new LMDh regulations, is it possible that the car will be available to customers? And will GT racing continue alongside an LMDh commitment?

I’m certain that GTE sport will continue in the FIA WEC. The vehicles are homologated for three years, so there’s nothing against competing with the current cars. It remains to be seen whether this will be in the GTE-Pro category in the long term. However, the GTE-Am class is definitely in good shape and there’s a boom in the number of entries. We’ll certainly see those cars on the racetracks for a few more years. We’ll have to see whether there will be an LMDh car for customers. If the financial framework is right, there’s no reason why not.

The technical regulations of Formula E had been changed due to the coronavirus crisis. How does Porsche view delaying the Gen 2 EVO to the 2021/2022 season?

We fully support the change to the technical regulations and the concomitant delay of the Gen 2 EVO launches to season 8. The current situation is difficult for all involved. It is crucial for all stakeholders to ensure the collective future of the sport. Therefore, we welcome this collective measure. Cost control is also important and understandable in the current situation.