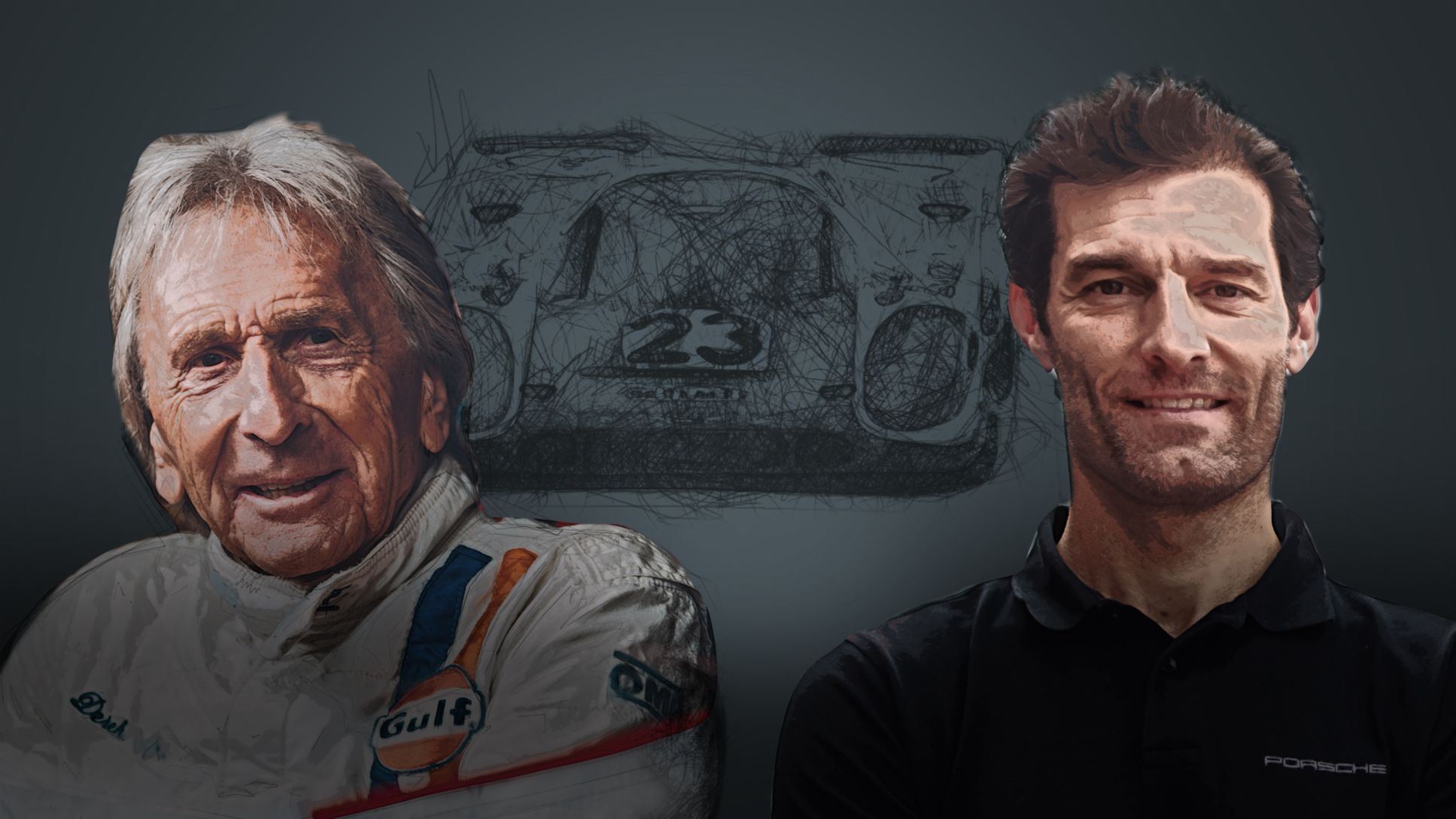 Brand ambassador and LMP1 ace Mark Webber was a pivotal figure in the 919 Hybrid programme that culminated in three back-to-back victories for Porsche at Le Mans. After a successful career in Formula One, Webber brought an exceptional breadth of experience and commitment to Porsche’s fledgling prototype campaign, narrowly missing out on overall victory at Le Mans on two occasions.

Derek Bell: “I first went to Le Mans with Porsche in 1971. When we were testing over the weekend, they calculated that I was doing 396km/h down Mulsanne. I knew we were going quickly, but not that quickly, because I’d only ever felt that before on take-off at Heathrow. So that was my welcome to Porsche at Le Mans!”

Mark Webber: “The history of the brand is so prominent when you race there. Having Dr. Wolfgang Porsche in the garage was massive for me. Remembering the journey he’d been on and how much racing meant to the brand. Le Mans was always the Holy Grail and to have the opportunity to drive for Porsche there, with their tremendous record – you feel part of something. It’s funny though: Le Mans is actually the worst race Porsche could enter in terms of how they think, because stuff happens over 24 hours and they don’t like stuff happening. They just want the job done. But because they’re so organised and meticulous with their preparation on the cars, they still back themselves.”

Bell: “Which they’re right to do. I drove on and off for Porsche for 35 years and in all that time I think I had one thing break. It was a suspension part that failed at Spa and caused me to crash. This was six weeks before Le Mans and I had no idea what had happened. I had a terrible time emotionally, never having crashed before. I was 45 years-old by this point and wondering if I was over the hill. When we got to Le Mans over a month later, Norbert Singer told me they’d discovered it was this little suspension component. If only I’d known for all that time.”

Bell: “Yes, you never heard Porsche say: “Oh no, that’s too expensive.” They were always looking to the future. At Ferrari, the mechanics cried if you won and cried if you lost. With Porsche, if you won, they grunted and if you didn’t win they grunted and went back to the drawing board. It was all about making sure the car worked and was safe. That was their job.”

Webber: “I remember in 2016 we had a big lead – 60 seconds or so – and Timo Bernhard woke me up to tell me the water pump had gone. That car was so, so good and our team boss Andreas Seidl’s face was ashen. They’d never seen it fail once in all the thousands of kilometres of testing they’d done. So you do get those tough moments at Le Mans, and you do get emotional seeing what the mechanics and other drivers are going through.”

Bell: “Absolutely. I think my fondest memory of Le Mans was winning in the 936 in 1981. The new CEO Peter Schutz wanted Porsche back on top at Le Mans but they didn’t have a car. The story goes that the engine developed for Indy Car was just lying around so they put it in the 936, which was four years-old by then. I didn’t even sit in that car until we went out for first practice, but we got pole position, led every lap and won the race. That for me was the most memorable because it was a comeback of sorts and I’m so grateful to Porsche for giving me that opportunity.”

Webber: “The one that comes to mind most often for me is strange because I wasn’t actually racing. It was 2017 and I was Grand Marshall and the car that won was driven by Timo, Brendon Hartley and Earl Bamber, who’d just replaced me. My old seat was still in that car! They came from nowhere to win that race and it was my job to hand them the trophy. But it wasn’t a difficult moment for me. Those were the best hugs I’ve ever had. I get goose bumps even now. They were my mates and they wanted me to stay on the podium like a fourth driver. That was definitely my Le Mans highlight. Our bond was extraordinary.”