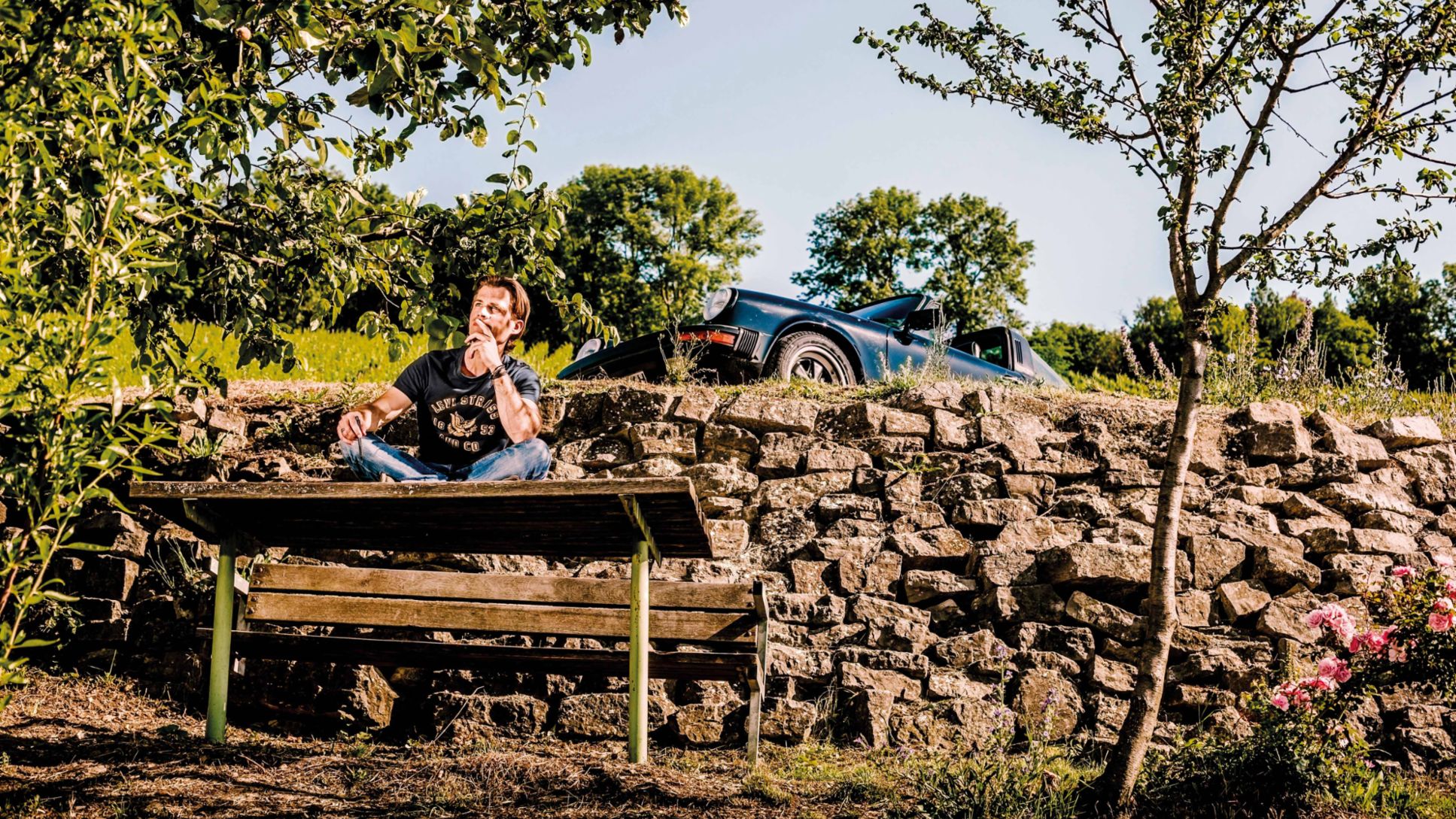 It’s the air of effortlessness: Bas Kast slices lemons for our lunch with the same casual insouciance with which he sprang from his 1987 Porsche 911 Carrera Targa only a few hours ago. The fact that no one would believe his age – 47 – well, that’s something the bestselling author should be almost used to by now. The way he stands there – slim in jeans and a T-shirt, his hair nonchalantly combed back – he could easily pass as someone in his mid-30s. It must be the diet. Or the genes. Or maybe it’s because he has found a completely new balance.

“These days, I’m more relaxed and more the person I wanted to become,” says Kast. That’s easy to say when your last book has sold nearly a million copies. Bas Kast’s Diet Compass is now in its 33rd edition and has been translated into more than 20 languages. At the end of September, his first novel, Das Buch eines Sommers (Book of a Summer, not yet available in English), was published by Diogenes Verlag in Switzerland. The subtitle is “Become Who You Are,” which could just as easily be a fitting title for his life. “I’ve always dreamed of being a novelist,” says Kast. And of driving a Porsche 911 Carrera Targa. His dreams have come true now, but it was not an easy road to the top. In fact, it was quite the opposite.

Let’s go back a few years: to Bas Kast in his early 40s. Then he was a good ten kilos heavier, a fast food junkie and a reasonably successful non-fiction author who loved chocolate for breakfast, ate meat almost every day, and would wind down with crisps and a beer. Until one spring evening when, out of the blue, Kast’s heart briefly stopped beating while he was out running. As these heart attacks increased, even at night, the new father turned his life around – especially with regard to diet. A biologist, psychologist, and science journalist, Kast has spent three years immersing himself in the world of nutrition and obesity research. He ploughed through thousands of studies and countless nutritional dogmas and myths, only to end up occupying the bestseller lists with his meticulously researched and chattily narrated ultimate guide to nutrition.

It sounds like material enough for a success story, but it’s not enough for Kast, who in his non-fiction books has written about such topics as love, intuition and creativity. Kast prefers to take a look at the questions that life asks him. So why not implement some of the answers? The more he learned about healthy eating, the better he felt. He discovered, for example, the beneficial effects of vegetable “binges” and intermittent fasting, or the misguided fat phobia (at least when dealing with healthy oils such as those made from canola or olives). The more he dared to cook for himself and cut junk food from his menu, the more he enjoyed the experience. The love handles disappeared and with it the heart attacks and the recurring headaches. “I am in better shape today than I was in my late 30s,” says Kast, who now has three sons aged between ten months and seven years.

“Even though I’m not as strict as when I started my diet.” Kast follows the advice he gives his readers. As much as possible, he eats only unprocessed, plant-based foods, meat no more than twice a month and then at most as a side dish, as well as fish once or twice a week.

Today’s menu, for example, features a large trout from a Franconian pond, cooked in a stainless steel roasting pan and embellished with halved tomatoes, quartered onions, sprigs of rosemary, and a lemon sliced into eighths, plus a good dash of olive oil. A simple dish. Kast is not someone who spends hours on end in the kitchen. “I cook for my family every day; it shouldn’t take more than half an hour,” he says as he places the fish in the oven. In the meantime, a lentil soup with tomatoes, garlic, and vegetable stock is simmering on the stove. This recipe is from his sister Ellen, who inspired him to change his diet when his heart – and life – had gone off course. “She had just completed a low-carb diet and raved to me about how great she was feeling. It was pure coincidence.”

Sausages, fries, and mass-production meats (definitely not!) have vanished from Kast’s shopping list, and he avoids sugar as much as possible. Yogurt is fine, milk not so much, but plenty of high-quality olive oil, lots of nuts, legumes, fruit and vegetables, vegetables – and more vegetables. Breakfast consists of drip coffee and a piece of 90 per cent chocolate; nothing should be eaten after 19:00. Alcohol is only consumed in moderation, although as the great-grandson of a Palatinate vintner, Kast certainly appreciates a fine wine. Anyone who takes a verbal baseball bat to Bas Kast with the word “self-denial” and takes a second swing with “where’s the pleasure?” is met with a relaxed smile: “For me, pleasure means that I no longer have headaches and that I don’t huff and puff when I climb the stairs. That I’m happy in my body, that I’ll probably still be fit when I’m older, and that I won’t need to see a doctor that often.”

“To me, the act of writing is also sensual. Similar to cooking.” Bas Kast

Of course, one of Kast’s great pleasures is driving his Porsche 911 Carrera Targa. “I’ve longed for one of these since I was a student. My father used to own a red Porsche 356 and always said it was the best car of all.” Kast financed the Porsche from his book earnings, two years ago. “I like the sense of space, the aesthetic form and perfection,” he says. “You can tell there were engineers at work, with a burning passion for cars.”

Speaking of burning, don’t let the lentil soup burn with all the rhapsodising. It’s ready now, and there’s a glorious scent wafting from the oven as well. Lunch is served! Surrounded by vineyards, we sit on the terrace of the Weingut am Stein winery in Würzburg. And of course, it all tastes fantastic. Kast, who lives in the countryside just outside Würzburg, likes this spot. It was here, in the cookhouse of the winery’s award-winning restaurant, that the photos for his follow-up cookbook to Diet Compass – which sold an impressive 140,000 copies –were produced.

He could have sat back and relaxed. Instead, following his own compass, he threw himself into the next adventure: his first real novel. “I wouldn’t have risked the attempt without the earnings from my book,” says Kast. He had already tried his hand at fiction at 17, and wrote a second novel in his early 20s, but nothing became of either one. His newly published Das Buch eines Sommers follows the path of a young man who, in searching for his destiny, is strongly inspired by his uncle, a bon vivant, novelist – and a Porsche driver. A lot of Bas Kast can be seen in the story, of course, both in the young man and in the character of the fictional uncle. “Actually, I am both,” he says. “I wanted to enter the core of my own self.”

“Happiness is when you want what you get.” Bas Kast

On the other hand, non-fiction research, as complex as it is, is the easier task. “You put your soul into a novel,” says Kast. “And you must have a story to tell.” That’s probably easier to do at 47 than at 17. But it was an entirely new endeavour. “Think less, feel more,” his editor advised him at one point. “For me,” says Kast, "that sentence was a kind of liberation."

As a non-fiction author, he was trained to rely on studies. Everything was based on scientific knowledge, with page after page of references to demonstrate expertise. As a novelist, the only expertise is that which one has experienced, which one has understood. And above all: felt. “Success is when you get what you want,” says Kast, as he picks out one last, deliciously sweet grilled tomato from his plate, underscoring his statement. “Happiness is when you want what you get. And that is what I’ve been finding more and more these days.” Bas Kast’s compass is pointing in a new direction. And perhaps for the first time in his life, it is his very own.

Tini is my mother-in-law, who as a naturopath has intensely studied nutrition. The recipe:

Ellen is my sister, who first inspired me years ago to change my diet. The recipe: