A small production shop in southern France makes magnificent chandeliers for customers around the world. Régis Mathieu is passionately dedicated to this centuries-old craft—and to his collection of Porsches.

It’s hard to imagine a spot more conducive to creating art with light than a radiant red farmhouse on a sunlit hill in Luberon, the region of France known as le pays des lumières du paradis—the paradise of light and color. In a former ochre factory on the outskirts of the small Provençal town of Gargas, forty-six-year-old Régis Mathieu runs a world-famous production shop that restores, reproduces, and designs chandeliers. His work adorns Opera Philadelphia, the Paris Opera, the Palace of Versailles, and the Laxmi Vilas Palace. In short, his lights illuminate the world. And a beautiful collection of Porsches as well.

In the orange-hued rooms of Mathieu’s museum in Gargas, rare vehicles from Zuffenhausen sparkle alongside crystals from Louis XIV and Madame de Pompadour. The cars include hard-to-find models such as a 1964 Porsche 904 Carrera GTS, a 356 Speedster, a 911 RS 2.7, and a 718 RSK. Mathieu’s passion for Porsches began at the early age of seventeen, when he bought a VW Beetle, restored it, and shortly thereafter acquired his first 356 C. An ardent collector, he concentrates exclusively on sports cars that were designed under Ferdinand, Ferry, or F. A. Porsche. “I think it means a great deal when your name appears on the products you create.”

People tend to associate chandeliers with castles, cathedrals, and stately old residences rather than with modern buildings. Not Mathieu. “Chandeliers have always been outstanding works of art that express something about their owners’ way of life,” he says. And Mathieu designs pieces that are far more than just light fixtures. From the ceiling of his showroom hangs a gigantic cube, five sides of which consist of smoky rock crystal and the sixth of shimmering violet amethyst. He made only eight of them, because exclusivity is an important criterion not only for Porsche collectors but also for Mathieu’s illustrious clients. A few days ago he discussed designs for a new light object over lunch with a maharaja—just as Louis XIV of France might have done with the light artists in his day. In a sense, the Sun King himself is among Mathieu’s clientele, because the Palace of Versailles contains objects that were painstakingly replicated or restored in Gargas.

Mathieu’s success is the result of hard work. Following World War II, his father made a name for himself producing contemporary lighting, but the Mathieu Lustrerie company closed after his untimely death, when his son was only eleven years old. Régis Mathieu studied business and then decided at the age of twenty to resurrect his father’s firm. Still a student, Mathieu threw himself into the relaunch, worked on his own designs, and taught himself the craft. He began to visit places where potential customers might reside, including Russia, the Middle East, the USA, and of course France. Every cent earned was reinvested in the company. With one exception. At the age of nineteen, he bought his 356 Speedster. “The car was important to me. I drove it to work every day when I was building the company. Although I was working very hard and hadn’t earned anything yet, I felt rich, because from morning to evening I was surrounded by objects that made me happy.”

Mathieu proved to be brilliant not only as a designer but also as an inventor. He developed a revolutionary LED bulb that emits light deceptively similar to that of a candle. He also collected historical chandeliers, selling some of them and starting to display others in his museum in 2010. His favorite is a replica of a candelabrum made by the sculptor Jacques Caffiéri for Madame de Pompadour. Many old chandeliers have been damaged in wars or have lost some of their parts over the years. Mathieu restores them down to the last detail. One project was for the Opéra Monte-Carlo, which commissioned him in 2001 to reconstruct a chandelier that was five meters high, weighed five tons, and had 328 light bulbs. Equipped with just a century-old black-and-white photo, he studied its faded lines and curves like a detective reading the scene of a crime. To gain a better idea of the dimensions, he had the photo enlarged to the size of the original fixture. Five years later the opera house installed the chandelier in its newly renovated dome—a truly moving moment.

Mathieu also reveals his emotions when speaking about his collection of Porsches. “My cars are something special, because every one of them has an extraordinary story.” He would never sell any of them, least of all his Speedster. “It’s more than a car. When I bought it, I already knew my wife and we selected it together. My infant son Arthur rode in it.” That infant is now fifteen—and has just bought his own VW Beetle. Mathieu hopes his son will follow in his footsteps, not necessarily to take over the Lustrerie—“but my Porsche collection.”

In 2010 Mathieu began arranging exhibitions consisting of graceful combinations of cars and chandeliers. For example, his latest creation Méduse—a gigantic bronze chandelier in the form of a jellyfish whose tentacles are lit from within and draped with precious agates—hangs above a scarcely less imposing silver 718 RSK, one of only thirty-five ever built. Mathieu searched “very deliberately” for it, because he wanted to both enjoy the car as a driver and display it as an artist. When darkness falls, the orange-red rooms of the erstwhile ochre factory are illuminated by hundreds of small LED flames, reflecting off the crystal with its centuries of tradition and dancing on the polished chassis of the Porsche.

Mathieu was born in Marseille in 1971. He studied business, relaunched Mathieu Lustrerie, and has since been designing light objects for some of the most famous buildings in the world. In 2013 he wrote a book about the history of chandeliers. Mathieu’s Porsche collection will be on display in a special exhibition at the museum Cité de l’Automobile in Mulhouse until the end of September. 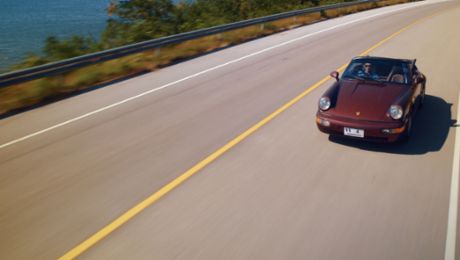 From father to son: 964 Carrera 4 Cabriolet

How a shared love of Porsche keeps childhood memories alive. The story of Napondet Hetrakul. 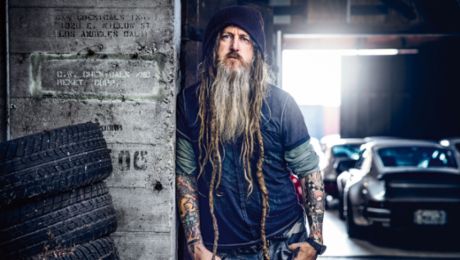 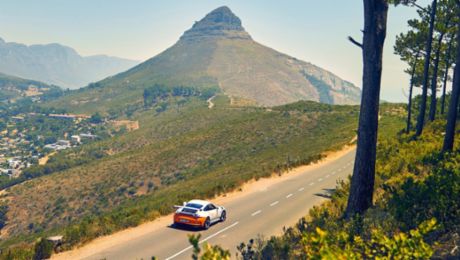 Peter van der Spuy is a Porsche fan and one of the most acclaimed jet pilots for politicians and celebrities.