From father to son

How a shared love of Porsche keeps childhood memories alive.

Amid the rising heat and humidity of a weekend in late February, most of the residents of this quiet corner of Bangkok take shelter in the air-conditioned comfort of their apartments, waiting for the midday sun to burn itself out. But one intrepid local has other ideas.

The stillness of an empty street is broken suddenly by the familiar whirr and bark of an engine firing into life. It settles to idle and that rich background rumble prefaces the appearance of an immaculate Amethyst 964 Carrera 4 Cabriolet, top already down, ready for business.

The best way to cooling down

Behind the wheel, 31-year-old Napondet Hetrakul – Naja to his friends – is cooling down the best way he knows how. Sleeves rolled up on a lightweight Chambray shirt, gold-rimmed aviators concealing the emotion in his eyes, he passes the grey leather wheel through soft hands before letting the clutch out fully and trundling gently up the sun-baked street.

Emotion because, as Naja later reveals, this is much more than just a car to him. This particular 964 belonged to his father, who died some 20 years ago. He was a Porsche fanatic through-and-through, owning numerous 911s in his life including two Turbos. The 964 the last car he ever bought.

Naja’s own Porsche fever set in young, after his father bought him a Porsche Junior at the age of seven. With a two-stroke engine and working gears, this boil-washed 930 Turbo would sow the seed of a shared passion, cut short by his father’s untimely death.

The car was left as it was

As his family gradually sifted through his father’s possessions in the ensuing months, it was decided that they would keep the 964 for Naja and present it to him when he turned 18. Showing barely 1,000 miles on the odometer, the car was left as it was, exposed to the elements, while Naja devoted himself to his studies and later his work.

A successful businessman himself now, he has owned a succession of Porsche cars, ranging from a Cayenne Turbo to a Panamera S E-Hybrid, and a much-loved 997 Carrera S. But the ageing and overlooked 964 represented something altogether different, and six years ago Naja decided to have it restored to its original state.

He got in touch with AAS, the authorised Porsche importer in Thailand, and began the lengthy process of having the car stripped, repainted and painstakingly rebuilt to exact factory specification. Used to having the 964 around, Naja found that he missed it during the restoration and would pay AAS regular visits just to see it in the metal.

Weekly outings allow him revisiting memories in that open cabin

Now, with the car exactly as it was all those years ago, Naja feels a strong connection to his father whenever he drives it. Weekly outings though the Kaeng Krachan Petchaburi District southwest of Bangkok, or the winding coastal roads to Pattaya City, allow him to rekindle their mutual love for Porsche, revisiting happy memories in that evocative open cabin.

For Naja, his Porsche transcends the simple status of ‘car’ or even lifestyle. For him it is a connection to both his past and present; to friendships and a sense of community in the wider Porsche world. He will pass this car on just as he father has done, sharing its story from one generation to the next.

With the 3.6-litre flat-six hollering behind him, sea air cooling the cabin, Naja is transported to a different time. “Now, when I drive this car, I feel as though my father is with me. And he goes with me wherever I may drive.” 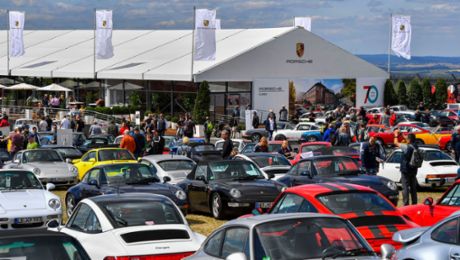 Porsche at the Techno Classica 2018