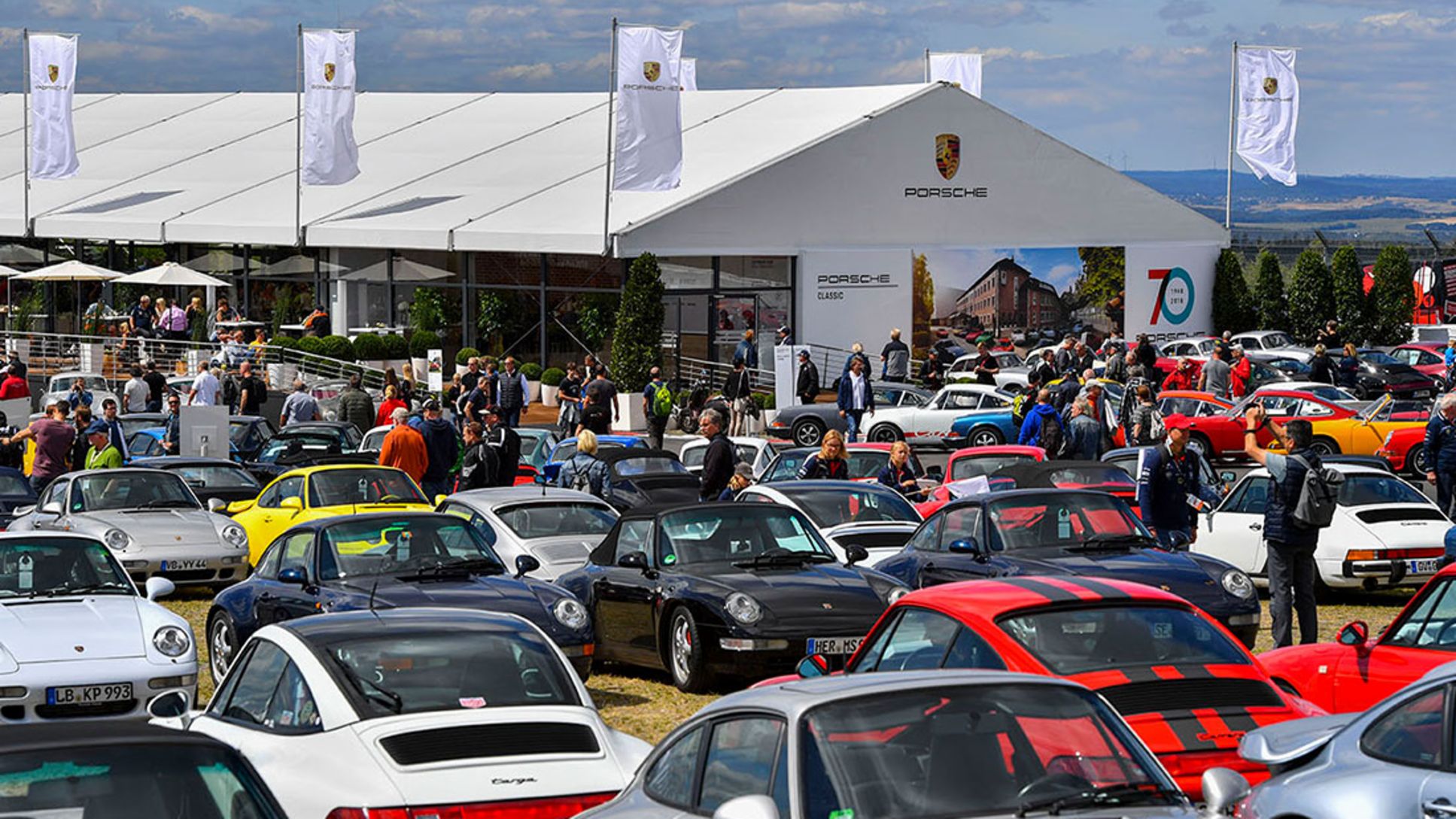 Porsche Classic has celebrated 70 years of vibrant sports car history at this year’s AvD Oldtimer Grand Prix. Showcasing the victories achieved by classic cars made in Zuffenhausen, the Nürburgring provided the setting for another anniversary: the 30th anniversary of the 964 generation of the 911.

Derek Bell, five-time overall winner of the 24 Hours of Le Mans, was starting in a Porsche 911 from 1965 in the “Gentlemen Drivers” category. In addition, two races for the current Porsche Carrera Cup Germany were included as part of the Oldtimer Grand Prix for the first time.

Porsche showcased itself on an area of 16,000 m² in the immediate vicinity of the race track, where a drivetrain from the 964-generation 911 relived one of the most important development steps in the history of the 911. The 911 Carrera 4, which made its debut 30 years ago, has now been extensively reworked with 85 per cent new parts and equipped for the first time with all-wheel drive. Back in 1988, the newly designed 3.6-litre engine with twin ignition was the most powerful naturally aspirated engine in the history of the 911, and it was the first passenger car engine in the world to have a controlled metal catalyst.

The suspension, with its light-alloy wishbones and coil springs instead of torsion bars, was also a new addition. With a fully panelled underbody and an automatically extending rear spoiler, the 911 achieved record aerodynamic values at the time.

As part of the anniversary exhibition, around 50 private type-964 models featured alongside a 964 Turbo S and a 964 RS from the Porsche Museum collection. In 1990, it was also a type-964 911 that launched the Porsche Carrera Cup Germany; the races for this year’s series took place on the historic race track in the Eifel region on the Saturday from 1:45 pm and on the Sunday from 12:00 pm while being broadcast live on German television channel “Sports1”.

Derek Bell was available for autographs at the Porsche Classic stand

The motorsport events featuring classic cars also saw Porsche sports cars in the starting line-up: A highlight for this year was a first-generation 911 restored by four British Porsche Classic Partners. One of the drivers behind the wheel of this classic from 1965 was Derek Bell, who was available for autographs at the Porsche Classic stand on the Saturday morning from 10:30 am. The racing series is for GT vehicles built up to 1965 and started on the Saturday evening at 7:05 pm.

Porsche traditionally offers a diverse presentation at the AvD Oldtimer Grand Prix. Porsche Exclusive Manufaktur presented 12 highly customised vehicles from all model lines. Customer advisors were on hand to provide information about factory enhancement options and the Porsche Tequipment range of accessories. A current Porsche model could be rented on site by the hour thanks to “Porsche Drive”, and the “event truck” presented by Porsche Driver’s Selection showcased the current collection and offered selected items from the Porsche Museum and accessories products from Porsche Classic.