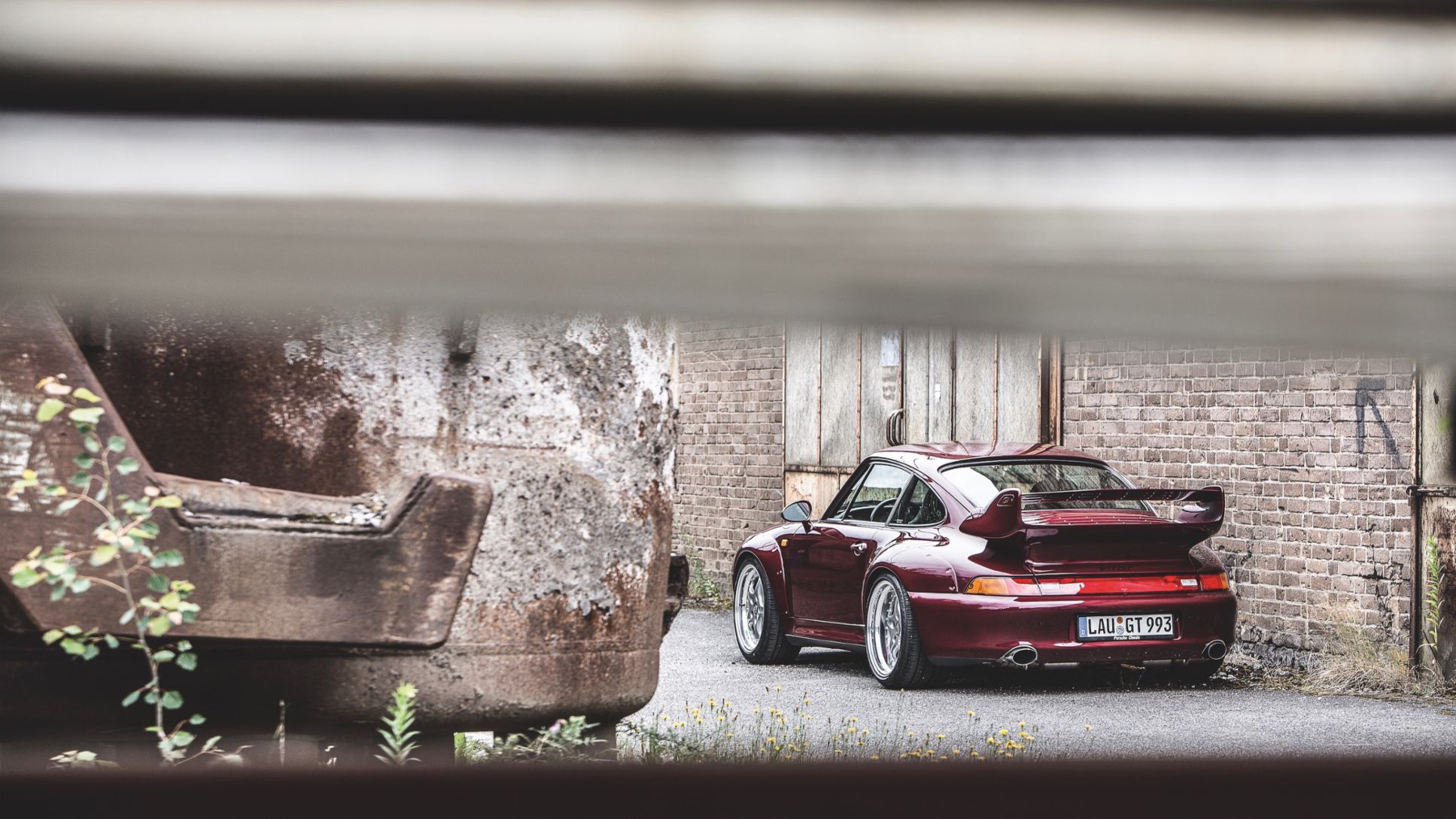 The 911 GT2 is a radical piece of equipment. A vehicle for purists and perfectionists – like WhatsApp founder Jan Koum, world rally champion Walter Röhrl and Porsche collector Frank Troche.

This is the story of one Porsche and three men: Frank, Jan and Walter. Frank is a 911 aficionado with an astoundingly detailed level of knowledge. If it were not for him, this vehicle would not be here today. Jan invented something that almost everyone now uses. Since he sold his company, it’s fair to say he’s had more time for the finer things in life. He owns the car and Walter drives it – because that’s something that Walter can do better than anyone else. What do our four protagonists have in common? All of them are extreme in their own way. But let’s start at the beginning.

Frank Troche lives Porsche. He can talk with great expertise on virtually any topic relating to the Porsche vehicles of the past. He also has quite a few Zuffenhausen icons parked in his garages. Frank is a perfectionist, and that’s why he’s built up a formidable network of specialists who restore his Porsche vehicles with absolute fidelity to the original or finish components to the best possible quality. His efforts brought him into contact with Jan. Jan Koum was born in Ukraine but lives in California. In 1992, at the age of 16, he came to the United States with his mother. He got off to something of a rocky start. Both mother and son underwent great sacrifices so that he could complete his studies. But Jan learned quickly, and when he got his hands on his first iPhone in 2009, everything slotted into place: Together with a friend, he developed software which allowed smartphone users to send status updates to each other. He called it “WhatsApp” – the starting point for a dream career in Silicon Valley. Nowadays over one billion people around the world use the messenger service. Koum sold the company to Facebook in 2014 for a figure in the two-digit billions, and joined the Facebook board. He’s still responsible for determining the future direction of WhatsApp.

The dream of his own mint-condition 911

But it’s not just bits and bytes that make his heart beat faster. Jan Koum lives and breathes for good old-fashioned mechanics when they come in the form of exquisite sports cars from Zuffenhausen: Koum is a Porsche fan to the core. According to Frank Troche, “His first car was a pretty beat-up 924.” “The headlights no longer flipped up, and so on. Jan tinkered around with it a lot.” Amateurish as his efforts might have been, this was when he first fell in love with the marque, and perhaps it was the dream of his own mint-condition 911 which inspired Koum’s entrepreneurial efforts. Be that as it may, Koum likes to be accompanied by a sports car from Swabia during the key moments of his life. “It’s no coincidence that he drove a Porsche to the meeting at which the WhatsApp sale took place,” underlines Troche. “They signed the contract in front of the door of the social services office where he once stood in line with his mother for food stamps…”

As Troche is keen to point out, “Jan still remembers where he came from – that’s why he’s so down-to-earth and warm-hearted.” “He wears T-shirts and sneakers rather than expensive watches. If we go out for dinner in California, he’d rather call an Uber than show off by driving one of his amazing cars around the city...” Even though the vehicles lined up in his garage are presentable in any company. Troche estimates than Jan Koum’s car collection currently numbers around 100. According to Frank, “Jan’s particularly keen on GT and sports models – provided they’re not black. He prefers cars without a radio and sliding roof, and he can manage without air conditioning.”

Koum absolutely insists on one thing, however – his cars must be in an immaculate original condition. Just like the young man who dreamed of his own mint-condition Porsche. “These days no one can pull the wool over his eyes,” says Troche. “The depth of his knowledge is astonishing.” If the car is not 100 per cent good as new, it is scrupulously restored – and this is where our German friend and his network come into the equation. It all started with a 997 Sport Classic owned by Troche’s family. “Jan was searching for this model, and we had the very one. He’s a frequent and enthusiastic visitor to Germany, and so he flew over without delay.” It became clear very quickly that the two of them were kindred spirits who spoke the same language: “Today we’re in contact almost daily, either via WhatsApp or by phone – and we don’t even always talk about cars!”

Perfection and obsession with detail

If Koum or one of his scouts finds an exciting Porsche vehicle in Japan, for example, it often makes a stop-off at the private Porsche collector Frank Troche first for restoration. He takes care of all the organisational details. “The United States is naturally not short of Porsche specialists,” says Troche, who lives in Middle Franconia. “But it’s unlikely that anyone in the US would ever reach our standards of perfection and obsession to detail.”

Perfection and obsession with detail – the cue for Walter to enter stage left. It almost goes without saying that the Walter in question is Walter Röhrl. “Walter’s been a close friend of the family for many years,” explains Frank Troche. It’s a tough job to decide what to buy a multi-billionaire Porsche enthusiast for their 40th birthday, but Troche came up trumps with the idea of a day spent with a rally driver – and not just any old rally driver, but probably the best rally driver of all time. “Der Lange” (the tall guy) from Regensburg happily agreed. “Jan and fast driving don’t get on too well,” recollects Walter Röhrl, grinning at the memory of their trip. But Koum was all the more impressed by the level of precision with which the two-time world champion steered the car.

Ever since, Röhrl has had a life-long free pass to take any of Koum’s sizeable fleet out for a spin. Like the 993 GT2, which was first sold by Porsche in Nice. Even though it has 25,000 kilometres on the clock, after a thorough technical and visual update it looks as though it might never have left the hallowed production halls of Zuffenhausen. “That really is a thing of beauty,” admires Röhrl, and approaches the car to take a closer look: “The paintwork shows such attention to detail – you’d never find that anywhere else.”

“It’s not what you’d call a comfortable drive, but the steering is insanely aggressive – now that’s what I call driving!” Walter Röhrl

Porsche manufactured 194 units of the rear-wheel-drive lightweight version of the first 911 with biturbo engine. The cars were used for customer racing in the newly introduced GT2 class, hence the impressive wings. The cars manufactured in model years 1996 and 1997 delivered 430 hp. Yet even though Jan Koum’s car, which was the only 993 GT2 ever delivered in Arena Red Metallic, is one of the first series-production GT2 vehicles from model year 1996 with aluminium doors, its engine feels like it is capable of more than the 430 hp mentioned above. Porsche increased the output to 450 hp in model year 1998, and introduced steel doors instead of aluminium.

But that’s enough standing around and admiring from afar – now it’s time to get behind the wheel. “Getting into a car like this after driving a modern Porsche makes you realise what the company’s R&D department has been doing for the past 20 years,” says the two-time world champion after just a few metres. “It’s not what you’d call a comfortable drive, but the steering is insanely aggressive – now that’s what I call driving!” Walter Röhrl notices immediately that the Porsche 911 aka GT2 993 is relatively light, weighing in at 1,290 kilograms. “Weight is my top priority. Too much mass has a counter-productive effect when I’m cornering, braking or accelerating. I need a car to respond with precision to every touch on the steering wheel...” And what does the self-avowed purist think about the double turbocharged engine? “A naturally aspirated engine allows a higher degree of control, but personally I would always opt for the powerful thrust which can only be delivered by a turbocharger.” And the words are barely out of his mouth before he puts his foot to the metal. Even Walter Röhrl is taken aback: “That thing really does go like the wind. It’s almost hard to believe! Some years ago I drove the 700 hp Le Mans racing version, and that was certainly capable of burning the rubber. But in terms of power and speed, I’d be hard pressed to find a difference!” Then it suddenly occurs to him: “How can I ever go back to being satisfied with my own 993 Carrera RS?”

The Porsche Museum honours rally racing legend with an exhibition. 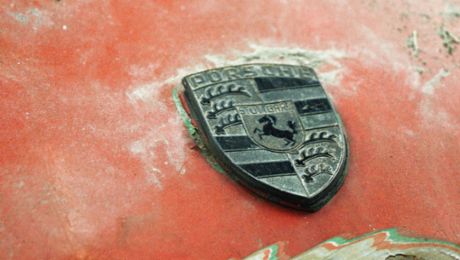 There are two ways of making a valuable garage find.