While on a skiing trip with the rally legend, and trying to keep up with him, we got into a conversation about what the mountains do to people, about limits, about the happiness of beating your own records, and about what is most important to him, Walter Röhrl.

Walter leads the way. Not a single misstep. No wobbles, like a machine. The man is 70 years old. A quiet pace – only the rhythmic scraping of our skis in the high snow. I try to keep pace in his wake, my heart thumping. I wonder how high you can get on skis — there’s not a soul here but us. The mountain lets you enjoy the here and now. There is no danger of an avalanche. Maybe it notices the humility and the effort it takes to climb it. Travelling on fur-covered skis is a beautiful, elegant way to move, but it is also a little unfamiliar to an avid lift-user.

I am completely out of breath.

Röhrl asks if I know why people who live in the mountains are so grounded and then answers his own question: “Because they see these mountains every day and remember that they are little ants in comparison. Take a look at the world of sports: No-one who takes part in mountain sports is conceited – it doesn’t matter whether they are an Olympic champion or a downhill world champion. They all remain completely normal”. Spieleckkogel, Schusterkogel, Tristkogel, Staffkogel and Penhap. Walter’s local mountains reach into the heavens around us, all around 2,100 meters high. The air is as fresh as peppermint. It is utterly silent and the view is to die for.

Skiing downhill has also honed his ability to identify his limitations

For Walter Röhrl, the mountains and skiing are akin to the source of all happiness – he owes all of his skills to them. The intense experience of skiing downhill has also honed his ability to identify his limitations. He first hit the slopes at five years of age to learn about the mechanisms behind “downhill slope force”. As a trained ski instructor, he knew from childhood onwards: “If I make an error while going downhill, I’m done for”. He learned to know his limits while skiing.

With the exception of mountain biking and skiing, uphill tests left him cold. “Nothing really happens to you if you make a little mistake in a car. The energy just burns itself out”. But at the Monte Carlo Rally, the route up to the Col de Turini always made him anxious. Not because he was afraid of the hill-climb, but rather because “the goddamned idiots” ahead of him always piled heaps of snow into his path. “That always cost me time in cars with rear-wheel drive, regardless of whether it was the Opel or the Fiat. In my anger, I told Christian (Geistdörfer – Ed.) to stop at the top and just take his time with the downhill passage. Then the idiots will know who they’re dealing with”.

200 meters later, 1,365 meters above sea level, I wonder who or what is driving the man. It can't be me. Röhrl looks at his watch while I quench my thirst with a handful of snow. Walter doesn’t drink. He doesn’t sweat, either.

Walter Röhrl believes that his ambition comes from his childhood. “I suffered a lot because of my red hair. At first, when I was bullied, I would beat up the boys. Once I grew up, I said to myself: I’ll show them”. “Der Lange” (the tall guy) showed them all – and still does. “I have always been someone who keeps an eye out for the vulnerable”. Röhrl’s love of animals is legendary – he fell head over heels for the charm of his cat Maxi. If Maxi were to scratch Walter and give him blood poisoning, it wouldn’t matter to him. “Maxi can’t help it”.

Walter Röhrl: “Only the watch can tell me the truth”

In addition to his passion for animals, Walter Röhrl also has a strong affinity for watches. “I can’t do anything without a watch on my wrist”. Walter Röhrl collects them. Watches determine his life, his rhythm, his everything. “I realised that you can really delude yourself if you’re not wearing a watch. You often think you were fast, and then it turns out you were just imagining it. Only the watch can tell me the truth”.

It can even become a tic. Röhrl explains that he compared his times from 30 years ago with the present stats and grudgingly realised that he was 1:30 minutes slower. “Then I said to myself: You are an old fool, this is madness”. Nevertheless, he was happy as a lark when he once again beat himself by a minute and a half on the mountain. “For a little while, I am the happiest man in the world”.

We talk about movement and thought processes. He says that he does not usually reflect on what he is doing in the moment. The process is automated – he just knows that it has to go well. “The movement process has to be in harmony with everything you do”. According to Röhrl, driving a car is always about steering as little as possible. “I am quite adamant about that”. And when he's driving, he really does only think about driving and nothing else: “I look ahead and simply know exactly where I am”. At other times, he usually goes over the sports programme for the next few days. Mountain biking in the summer – “around 12,000 kilometres” – ski tours in the winter – “three to four times a week, preferably when the snow is fresh. That’s when everything is clean and untouched. Almost like an unspoiled world”.

Today, Walter Röhrl is actually working on slowing down. So he can relax more, he says. “The day spent on the mountain with you today was good for me”, he says, and identifies me as the reason: “You know, the way we ended up going, I had to say to myself for every step: slow, slow, slow. Otherwise I would fall back into my old rhythm”. 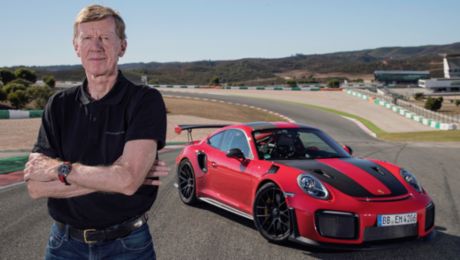 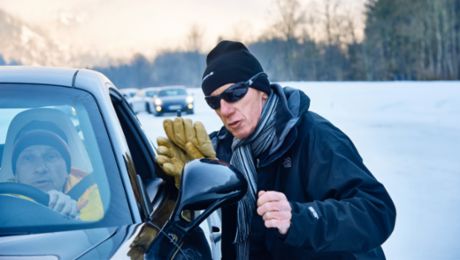 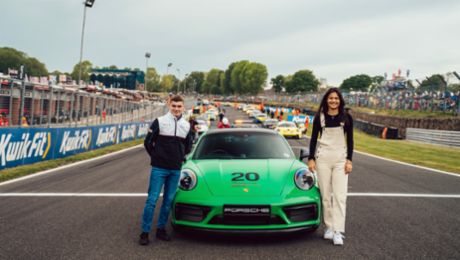