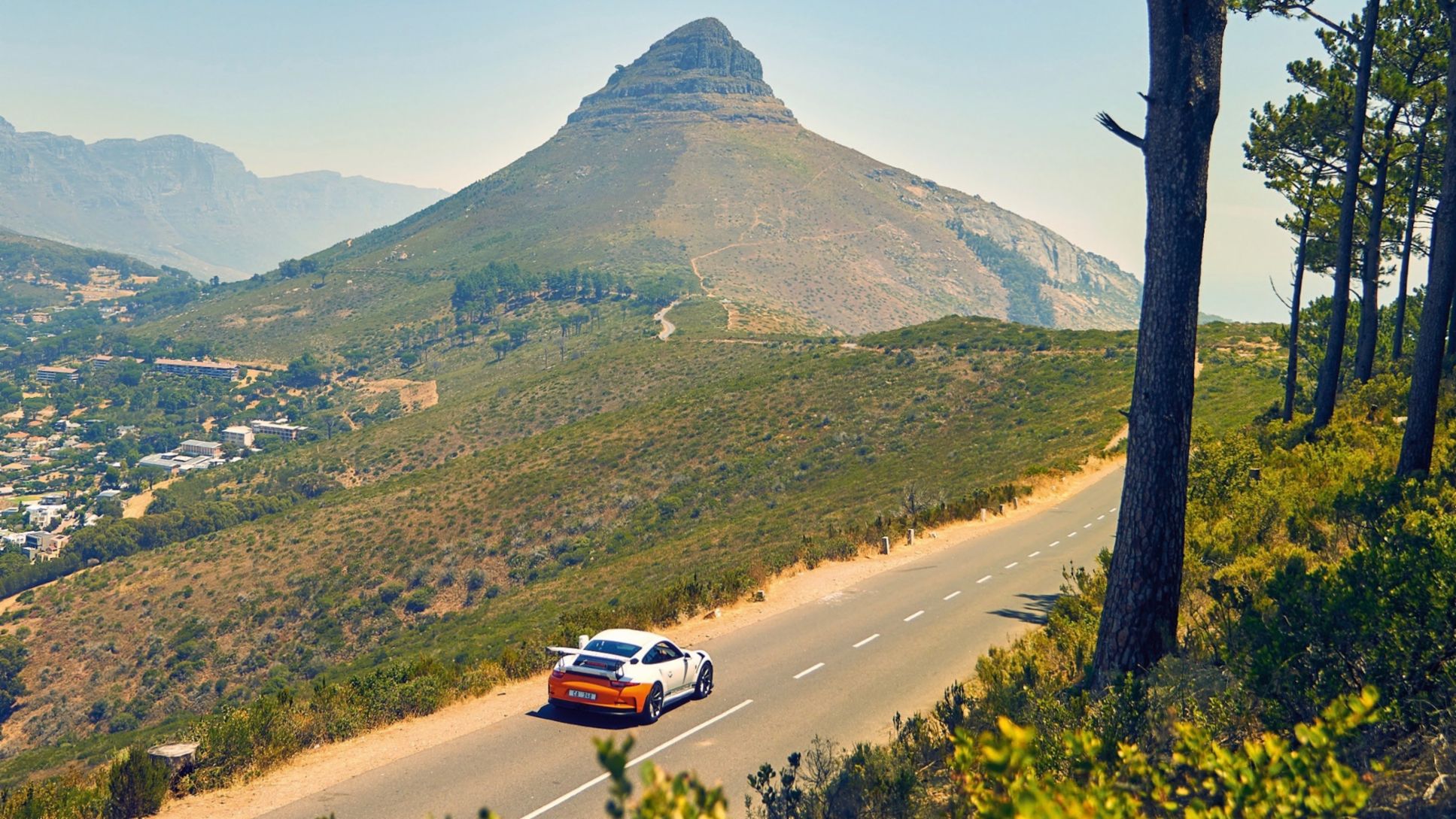 Peter van der Spuy is a die-hard Porsche fan and one of the most acclaimed jet pilots for business travelers, politicians and celebrities. His most prominent passenger was Nobel laureate Nelson Mandela, who would have turned one hundred this year.

To have secured a place on Mr. Mandela’s office wall was fortuitous. The now-famous photograph captured the senior leadership of the African National Congress (ANC), and Mr. Mandela asked for a copy of this photograph from me. I gladly obliged,” says Peter van der Spuy with a chuckle. There’s an unmistakable touch of pride in his voice. The image from the year 1993 shows the lanky pilot with Nelson Mandela in front of a private airplane, surrounded by the senior leadership of the ANC at the time: Chris Hani, one of the most popular politicians in South Africa; Mac Maharaj, who would later go on to be the spokesman for Mandela’s successor Jacob Zuma; and Peter Mokaba, who headed the ANC’s Youth League at the time. Hani would be murdered shortly thereafter, while Mandela would become South Africa’s president in 1994. “One day, Mr. Mandela called and asked for this photo, as it was one of the last ones that showed the leadership together,” recalls van der Spuy. “I sent him a copy of it in a beautiful frame and I understand that it ended up in his office.”

In the pilot’s house in the Cape Town suburb of Gardens, the photo hangs above van der Spuy’s work alcove—a space whose furnishings say a good deal about his second passion, after flying: the office chair is a repurposed seat from his old Porsche 911 Turbo. And on a counter comprised of a winglet—the tip of the wing on a Gulfstream jet—there’s a race suit, shoes, gloves, and a jet-fighter-style helmet. Not for his next flight, but for the next start by recreational race-car driver van der Spuy in his Porsche. These items share his living space with a redundant lounge suite from the refurbished yacht of the famous Hollywood actor, Nicolas Cage, which was donated to van der Spuy. Another memory from his travels across the world.

The South African has flown Arab sheikhs, Russian oligarchs, Hollywood stars—and countless illustrious politicians and global captains of industry. It is they who feature most prominently on van der Spuy’s personal wall of fame. Inductees include Pik Botha, the former foreign minister of South Africa, Cyril Ramaphosa, the country’s incumbent president since February, and Helmut Kohl, the former chancellor of the Federal Republic of Germany. Present in each picture: Peter van der Spuy himself, whose moustached mien in the older photos gives him the air of Tom Selleck’s Magnum, P. I.Today the man with the alert eyes, fit physique, and sun-drenched complexion of a Capetonian perfectly embodies the motto of baby boomers around the world: sixty is the new fifty.

But how did his connection to the political elite of the country come about? “A good friend of mine was an ANC member—one of the few white members in the 1990s who fought against apartheid and supported Mr. Mandela’s course. I had helped out as pilot for a confidential endeavor of Mr. Mandela prior to the negotiations with President F. W. de Klerk. Some time later, Mr. Mandela thanked me and said, ‘I have to travel a lot in the coming period; can you fly me?’” And that’s how van der Spuy came to fly one of South Africa’s most prominent politicians all around the country on his mission to abolish apartheid. “Mr. Mandela was an unsurpassed bridge builder. Once, we were in his home region of Transkei in today’s Eastern Cape province. They were holding a traditional celebration in his honor. I was the only white person present in his inner circle and it was then that I experienced the ‘Madiba Magic’ that touched so many people across the world. In accordance with tradition, Mr. Mandela, the revered leader, was given the first piece of char-grilled ox. And what did he do? He passed it on to me. I was completely stunned and whispered to my neighbor, ‘What am I supposed to do now?’ He whispered back, ‘Eat it. That’s the greatest honor that he can bestow on you.’ That’s how Mr. Mandela was.”

The South African is just about to launch into the next anecdote when the ringing of his cell phone interrupts the proceedings. It’s the mechanic who regularly maintains van der Spuy’s Porsche. After all, he’s been racing in the GT series for the past five years. He also takes part in hill climb races. “I had to wait until I earned enough money; it’s not a cheap sport by any means.” But he’s all the more successful for it today.

This year he aims to start in the South African Classic series as well. That he’s been driving Porsches for decades is down to his early years behind the wheel. “In my late twenties—even before I started flying—I bought a dismantled Porsche. Its owner had wanted to restore it but eventually tired of the project. We agreed that I could assemble the car in his garage. For over a year I worked on the car every weekend. It was a long slog, but as I was building it I really came to appreciate the incredible precision with which a Porsche is designed.”

A passion for collecting

Since then, van der Spuy’s passion for Porsche has never abated. Over the years, many different models from Zuffenhausen have found their way to his garage: until recently he drove a 911 GT3 RS and a 911 (964) cabriolet that has won no fewer than six trophies as the Concours champion of the Porsche Club South Africa. “I take pains to ensure that my cars are in perfect condition. I’m an absolute technology freak; it’s in my engineer’s genes,” quips the Capetonian before continuing more earnestly: “I always appreciate the highest levels of technology—in vehicles as much as in jets. Porsches, for me, are the best-built sports cars in the world. Porsche and my job are closely intertwined.”

The South African came to flying Gulfstream jets as a second career. In his first professional life he specialized in chemical engineering, or more precisely in combustion and cryogenic engineering technology for a manufacturer of industrial gases. A passion for aviation in general led him to take private flying lessons. For his final examination in navigation, he wrote a software program that he later sold to aircraft pilots. But it was a chance occurrence that ultimately changed the course of van der Spuy’s life: “A friend who owned an airplane asked me if I could find a pilot for him; I must know a few from my pilot training. I asked around, but couldn’t find anyone. I still didn’t have the type rating, which was necessary to fly particular types of aircraft and was very expensive. When my friend said, ‘I’ll pay for it,’ I went straight to my boss, quit my job, and became a commercial corporate pilot for private airplanes. The rest is now history. I’ve traveled the world as a career and always make sure that I touch base with the family of Porsche enthusiasts in the world, wherever I go. So the Porsche brand and flying jets are closely knit in my business life and my fun time.”

Whether in Europe, North America, or Asia—over the past twenty years van der Spuy has been on the job for his clients outside of South Africa for the majority of the year. Van der Spuy is one of the most experienced Gulfstream pilots in the world. He has clients all around the globe. Does he still fly celebrities to important meetings? Peter van der Spuy cocks an eyebrow, smiles—and keeps mum.

“I stand here before you not as a prophet but as a humble servant of you, the people,” said Nelson Mandela a few hours after his release from twenty-seven years of captivity as a political prisoner on February 11, 1990. He continued, “Your tireless and heroic sacrifices have made it possible for me to be here today. I therefore place the remaining years of my life in your hands.” Until his death five years ago, the Nobel Peace Prize winner spent his entire life fighting against apartheid in his homeland. From 1994 to 1999, he was the first black president of South Africa. Nelson Mandela would have reached the century mark on July 18, 2018.