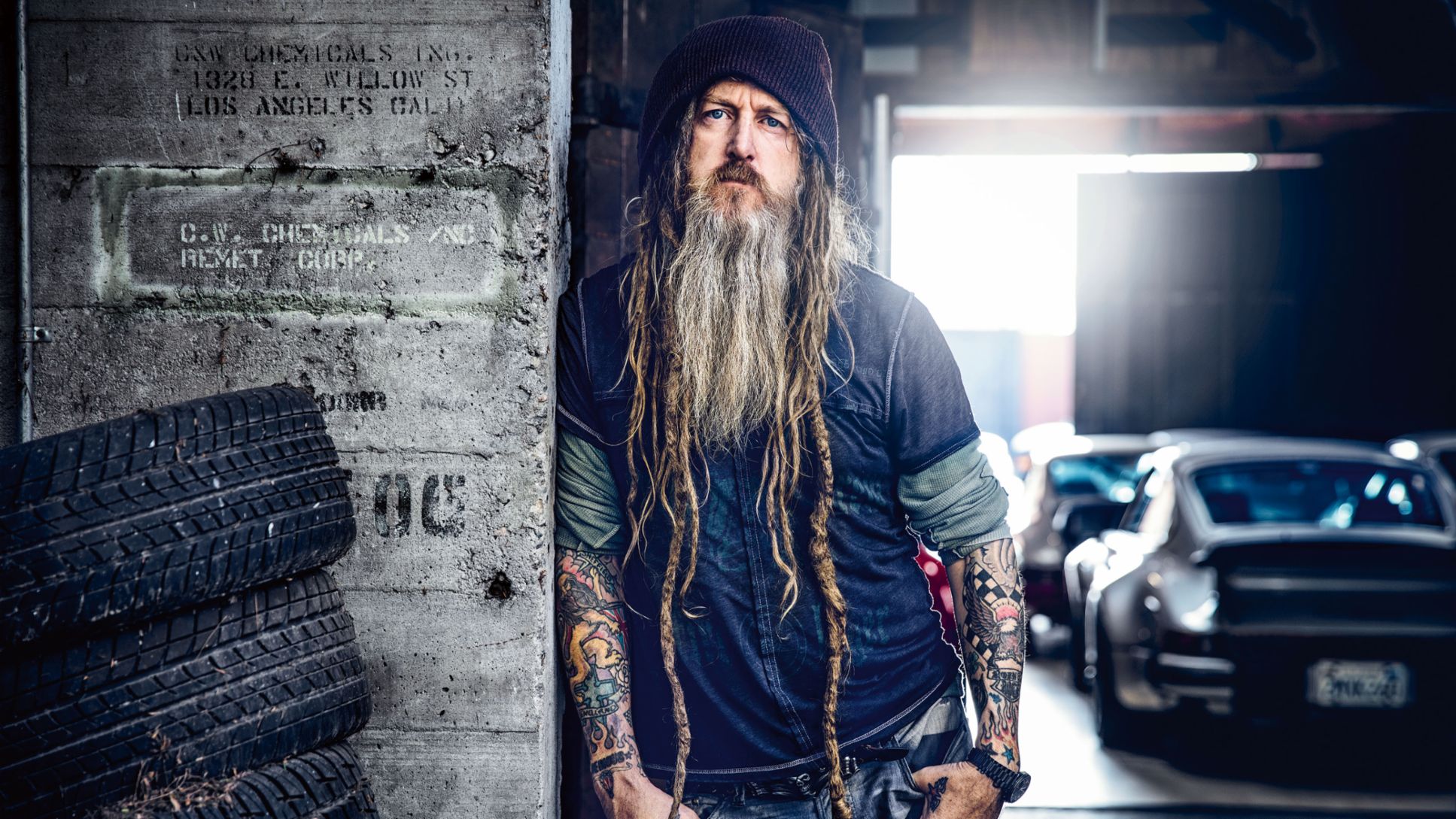 Magnus Walker first caught the Porsche bug as a boy in Britain, but a 911 seemed unattainable at the time. Today he owns one of the world’s most spectacular car collections. His autobiography, Urban Outlaw, was recently published to coincide with his fiftieth birthday.

Make no mistake, Magnus Walker has a very cool look. That’s not because he’d waste any time thinking about his appearance. No, the hip-length dreadlocks, the ripped jeans, and the tattooed forearms are simply the by-products of a high-speed life. Moreover, a skeptical attitude toward expectations and convention is written all over his face. Or as he puts it, “If everyone likes your look, you’re on the wrong track.”

Magnus Walker is a fashion designer, style icon, automobile enthusiast—and owner of one of the world’s most astonishing collections of Porsches, housed in an old factory building in Los Angeles. How he made his way from the blue-collar British city of Sheffield to glitzy southern California is recounted in his autobiography, Urban Outlaw. The book exudes the same principle that has run through his life itself—speed is of the essence! Walker’s story also tells its readers how to keep their love of driving alive in an age of gridlock. For the first law of Urban Outlaw is the following: “Drive every day like a race—if need be, against yourself.”

When Walker speaks of his first encounter with a Porsche 911, his British accent enlivened with West Coast slang, his voice softens. In 1977 he accompanied his father to the Earls Court Motor Show in London—and promptly fell in love with a 911 with red and blue stripes. “I knew right away that it was my dream car.” In Sheffield motorized vehicles tended to be trucks, tractors, and other work-related means of transport. “I’d never seen a sports car there,” he says. Sitting in front of the TV set, he became enthralled with racing, watching Formula One races with his father and cheering on James Hunt and other legendary British race-car drivers. “I sensed that it had to do with freedom and individual expression,” he says. But driving in Sheffield? Not worth the effort. Walker didn’t get his driver’s license until the age of twenty-one, in Los Angeles. Four years later he bought his first Porsche 911 for 7,500 dollars—an act that he calls an “enormous personal success” to this day.

It’s tempting to seek the key to Walker’s extraordinary life in his childhood—in the gray shades of Sheffield. He dropped out of school in 1982, went to the United States for a summer job, and stayed on in California, driven by the will to make his dreams come true. “The idea of returning to England as a failure was unbearable.” He began by selling self-designed punk fashion in Venice Beach, then entered the real estate business with his wife, Karen. The second law of Urban Outlaw is: “If it feels good, just do it.”

Precisely that maxim is what also fuels Walker’s passion as a collector. Over the years, his first 911 has been joined by dozens more, for a current total of around forty, he estimates. Most of them were found in appalling condition, fit for the junkyard. With his typical blend of playfulness and unerring style, he turned them into spectacular one-of-a-kind items. Every one of them was an attempt to make his childhood dream of a perfect sports car come true. These vehicles are no painted dolls, by the way. On the contrary. Their owner has no reservations about scratches or scars in the paint. “Cars need to be driven,” he insists—and that can leave a mark or two. Walker’s passion for collecting is also an expression of his curiosity and his drive for knowledge. “I can only understand the entire evolution of the 911 when I have a car from every stage of its development,” he says. This is why he doesn’t resell them very often. One 911 STR II, which graced the cover of Road & Track, was bought for more than three hundred thousand dollars by the industrialist and legendary Porsche collector Bob Ingram. The third law of Urban Outlaw reads: “Only do business with people who share your passion.”

“If you don’t bother with convention, anything is possible.”

Walker, the outlaw, turned fifty in July. His beard and dreadlocks are streaked with gray. After all these years he now takes the occasional break and lifts his foot a little more often from the gas. He’s going through a “period of reflection,” words that seem strange coming from his lips but have a serious background. Two years ago his wife died. That led him to search for new purposes in life. He knows above all what he doesn’t want—a vacation home, rounds of golf, wine seminars—none of the usual interests of successful men his age have any appeal for him. “Even as a child I never played by the rules,” he remarks. “And I haven’t changed.” The ultimate law of Urban Outlaw: “If you don’t bother with convention, anything is possible.”

He now shows up less often at his garage or his company—and contacts his employees only every few weeks. “I don’t want to start another business. Instead, I want to have new and completely different experiences,” he says. He spent the summer in the Dominican Republic. Doing what? Driving, driving, driving—a Porsche 911 GT3 on the narrow roads across the Caribbean island. “You never know what you’ll find around the next corner, and you have to fight for every centimeter of the road.” That being said, he did test the car’s phenomenal accelerative powers from time to time—which gave him moments of pure joy. When he sat with friends and a beer under a highway overpass, he still felt the vibration of the road in every cell of his body. Those are the experiences that drive him, and that’s why he wants to keep driving and keep moving. “The most intriguing question of all is where to go next.” Magnus Walker already knows the answer: in a 911 on the road of roads—the Panamericana.