California-based Sera Trimble is a professional driver working in film and TV. A demanding day job behind the wheel has done little to diminish her love of the open road however, and at weekends she can frequently be found aboard her air-cooled 911, exploring the more remote corners of her adoptive state. A favourite getaway of Sera’s involves a group of like-minded classic car enthusiasts, trunk loads of camping gear and Big Sur’s little-known Nacimiento-Fergusson Road.

“My first experience of this road was on a rally with about 18 other vintage 911 and 356 sports cars. The whole trip is about 1,600 kilometres over one weekend. You leave on the Thursday or Friday and do about 450 to 650km a day depending. And we all camp out of our vintage Porsches.”

The Nacimiento-Fergusson Road starts inland in the beautiful wine country of Monterey County before climbing steeply over the Santa Lucia mountains towards the Pacific Ocean. At its highest point the road reaches 840 metres above sea-level as it winds through the Los Padres National Forest, before plunging sharply to the coast and the Cabrillo Highway.

“You go through a whole bunch of different sections,” Trimble says. “Over the course of the entire road the landscape changes completely three different times. The early part, where it crossed the river near Mission Road, is made up of these big, billowing hills. It almost looks like you’re driving through fields of wheat and oak trees. It’s high speed and very beautiful.” Breaking you in gently, this first section, with its wide, easy roads and open vistas, is a complete contrast to what lies ahead. When the ascent begins, so does the real challenge for both car and driver.

“You head steeply up into the mountain then, and it gets tighter and tighter, turning into a single lane road that just zigzags in first and second gear for almost all of the remaining route. It’s kind of gruelling and exhausting, but it’s fun if you’re with a bunch of cars that are equal in terms of performance. Everyone’s going through the gears together and the exhaustion is collective! And the reward is the ocean at the end of it.”

The Nacimiento-Fergusson Road is not for the faint hearted, with incredibly narrow sections carved between sheer rock faces and perilous drops into the wooded mountainside where an absence of guard rails acts as its own, highly effective, regulator of your speed. Although oncoming traffic is relatively scarce, some caution must always be taken for the occasional heavy goods vehicle or camper van arriving unannounced around any of the dozens of blind bends that pepper its 37km route.

Trimble’s preferred drive for this, and any road, is her beloved G-Series 911, a semi-race prepared hot-rod she bought to use daily, and uses hard. And she soon discovered that it was the perfect car for taking on the challenges of Nacimiento-Fergusson.

"I find the 911 one of the most impressive driving cars. I’ve never seen anything just chug along like a vintage Porsche does." Sera Trimble

“I’ve done it in my 911 multiple years in a row now. I’ve never driven anything else at 4,500rpm all day and not had a problem with it. For that reason alone, I find it one of the most impressive driving cars. I’ve never seen anything just chug along like a vintage Porsche does. You can get in, drive 1,000km and it’s no big deal. When I got the 911, I wanted something that was imperfect enough that I wouldn’t be afraid to use it and enjoy it. It’s not some perfect butterfly that I’m ripping the wings off. Usability is key and I use it all the time.”

The Nacimiento-Fergusson road requires commitment, caution and no small amount of forward planning. Make sure you have enough fuel to get back, Trimble points out, and despite the remoteness, always be prepared for the possibility of meeting someone coming the other way. Oh, and take a few friends along for the ride.

“There can be traffic because people will camp up there at the top of the mountain,” she explains. “And there is the occasional truck, but for the most part it’s pretty desolate which makes it so enjoyable. It’s one of my favourite experience roads but it’s really made that by the friends I’m with and the collection of cars we’re travelling in.”

With travel restrictions limiting the opportunities for road-trips, Porsche Newsroom’s Sunday Drives series sets out to quench readers’ thirst for adventure by discovering the world’s most beautiful driving roads through the eyes of Porsche people around the globe. 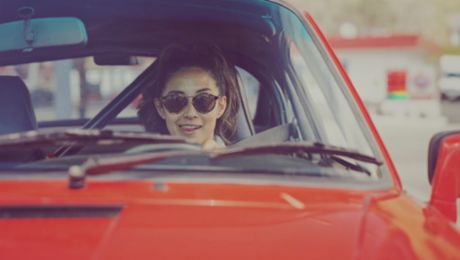