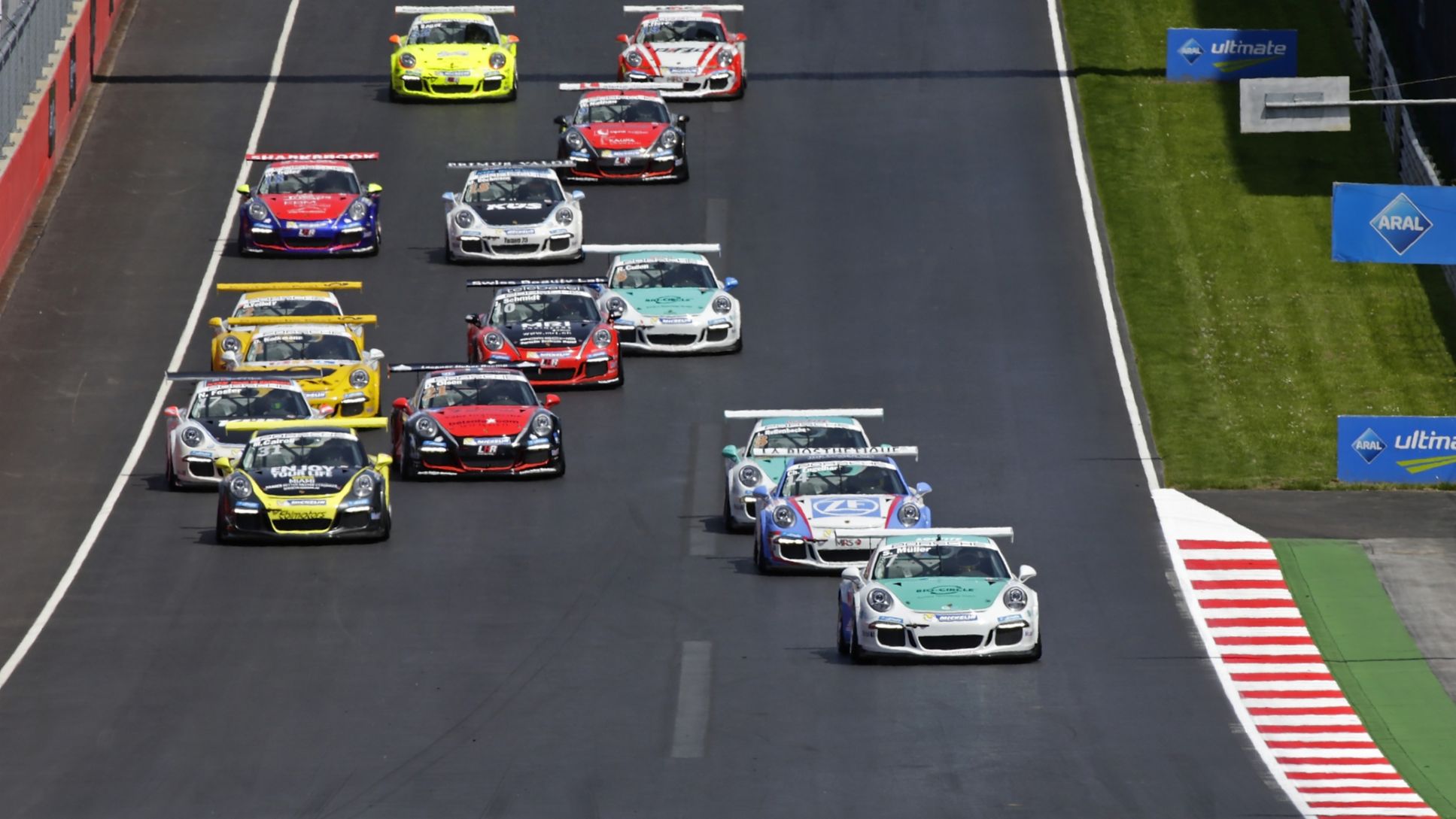 Müller and Engelhart win in Spielberg

Porsche-Junior Sven Müller has won round five of the Porsche Carrera Cup Deutschland on Sunday. Christian Engelhart celebrated his first victory of the season one day before.

Porsche Junior Sven Müller leads the Porsche Carrera Cup Deutschland championship after scoring his fourth victory. On Sunday, the 24-year-old Konrad Motorsport pilot won the Austrian round in Spielberg ahead of Christian Engelhart (D/MRS GT-Racing) and the Austrian Luca Rettenbacher (Konrad Motorsport). “This was an important victory for me because every point just might be the decider in the championship. My start was fantastic and I was able to get the jump on the field and hold the lead to the flag. In the final lap I even managed to turn my fastest lap,” explained the German winner from the town of Bingen near Mainz.

The Italian Porsche Junior and Carrera Cup guest starter Matteo Cairoli (Ebimotors) struggled with his start, as he did at Saturday’s race. Although he started from pole position, he was unable to defend it and had to slot into second place behind Müller with his Porsche 911 GT3 Cup. “I noticed at the start that I wasn’t quite in the best position. So I rolled a little and later received a ten-second penalty. It’s my mistake. The obstacle at the moment is the interplay between the throttle and the clutch at the start,” explained the 19-year-old Cairoli, who eventually saw the flag in fifth place.

The race outcome remained unaffected by the time penalty: Müller turned 19 flawless laps ahead of Cairoli and Engelhart, who trailed some distance behind. “I had the speed but just couldn’t close the gap. All in all it was a successful weekend for me with a victory on Saturday and second place on Sunday,” said Engelhart. Rettenbacher landed on the podium as a surprise guest. “Because of Cairoli’s time penalty, which he was only handed after crossing the finish line, I didn’t know until the end that I was third. I wasn’t able to drive my 911 to the podium, but was directed straight into the Parc Fermé. Of course I’m very pleased with this success,” said the beaming Rettenbacher, for whom this season is his first in the Porsche Carrera Cup.

For Porsche Junior Dennis Olsen (Team Lechner Huber Racing), who finished on fourth, the picturesque racetrack in Styria is not one of his favourites. “As far as the result goes, the weekend was okay. I scored fourth twice. But during Sunday’s race someone hit my car from behind and at first I thought my tyres were damaged. Luckily I could continue and yield some points,” said the 20-year-old Norwegian.

In the overall classification, Müller and Engelhart are tied with 101 points each, however because Müller has four victories to his credit he tops the overall standings with Engelhart ranking second with one victory. With 86 points Olsen follows on third place in the overall classification but ranks first in the rookie category. As the best amateur driver in the separate B-classification, Wolfgang Triller (D/Team Huber Lechner Racing) leads with 120 points. In the team classification, Konrad Motorsport and Lechner Huber Racing are locked in a tight battle for the lead. The squad under the Austrian team boss Franz Konrad holds a narrow lead after six of 16 races with 168 points just three points ahead of the Lechner Huber team managed by Christoph Huber from Lower Bavaria.

The YouTuber Sophia Thiel got an indepth look into the fitness regime of the racing drivers and had the chance to train with them. Thiel has a huge fan following on YouTube, Instagram and Facebook.

A look back at race 5

Christian Engelhart has clinched his first win of the Porsche Carrera Cup Deutschland season on the Red Bull Ring. On Saturday, the German beat the Italian Porsche Junior Matteo Cairoli (Ebimotors) and Jeffrey Schmidt (Team Lechner Huber Racing) from Switzerland to the flag. At the wheel of his Porsche 911 GT3 Cup, the seasoned Porsche specialist Engelhart kept his cool in a turbulent race packed with overtaking manoeuvres and gripping duels and was rewarded with 20 points for his victory: “I got away well at the start. At one point in the last third of the race I really had to fight but then I managed to pull clear of the field. I’m thrilled about bringing home a good result for the team and the fact that I’ve taken over the championship lead,” said Engelhart.

Porsche Junior Sven Müller took up the race from pole position and got the jump off the line. But in the very first lap the safety car was deployed after a collision amongst the backmarkers. After the restart Müller managed to defend his lead position until the race organisers handed him a drive-through penalty for an incorrect starting position infringement, which relegated him from the lead to the back of the field. “I was told that I was almost a metre off the mark at the start. This is, of course, extremely aggravating because it is my fault and it cost me the victory. Still, I turned the fastest race lap and I was still able to yield seven points at the flag,” said Müller.

Engelhart managed to defend his position

Engelhart benefited from Müller’s misfortune and promptly inherited position one on the 4.326-kilometre circuit in the seventh lap. For a brief time he came under fire from Cairoli, however Engelhart managed to defend his position. Cairoli, who contests the Porsche Mobil 1 Supercup this season run as support to Formula One, was a guest starter at the Carrera Cup race in Spielberg, Austria. This year, the 19-year-old competes in numerous Porsche one-make cups throughout Europe. “Even though it wasn’t good enough for first place, it’s always good to finish on the podium. Unfortunately my start was terrible and I dumped the clutch too early. But on Sunday I start from pole and I’d like to win the race,” declared the runner-up. Schmidt battled his way from ninth on the grid to finish on third after 14 laps.

Porsche Junior Dennis Olsen (N/Team Lechner Huber Racing) scored fourth. “I wasn’t at all happy with my start. I even lost a position. Around the midway point in the race I was trailing Foster and Rettenbacher and the two locked horns. I was wondering how it would end up. It didn’t turn out well and the two collided. Suddenly I’d gained two positions,” said Olsen. Fifth place went to David Kolkmann (D/Rookie Team Deutsche Post by Project 1).

The next race weekend of the Porsche Carrera Cup Deutschland takes place from 3 to 5 June on the Lausitzring.