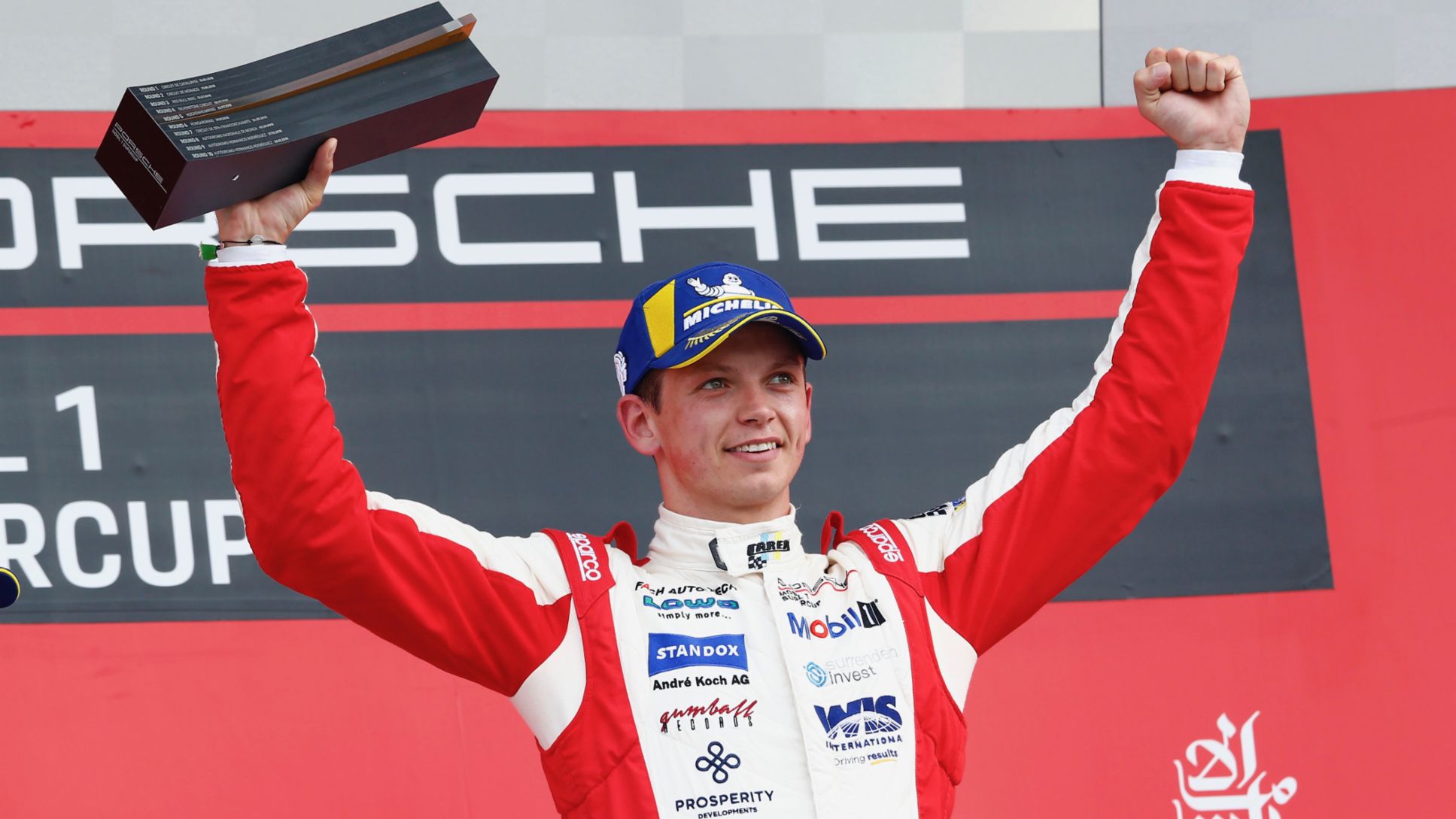 Nick Yelloly scores second win of the season at the Hockenheimring

Nick Yelloly scored a commanding lights-to-flag victory at round five of the Porsche Mobil 1 Supercup on the Hockenheimring Baden-Württemberg.

This triumph marks the Englishman’s second win of the season. “I got away well at the start and that laid the foundation for my win. To drive unchallenged at the front of the field might look easy, but you have to be totally concentrated over the entire distance. And I succeeded in that,” said Yelloly (Fach Auto Tech). At the wheel of his Porsche 911 GT3 Cup, Mattia Drudi (Dinamic Motorsport) from Italy took the flag in second place, with Michael Ammermüller (BWT Lechner Racing) from Germany crossing the finish line in third.

Under cloudy skies and in 24-degree Celsius temperatures, Yelloly pulled clear of the field immediately after the start. After 14 laps, the driver from Sollihull in the UK swept over the finish line in first, 3.6-seconds ahead of Drudi. Behind Yelloly, gripping battles for positions developed on the storied German racetrack. Taking up the race from the third grid spot, Drudi immediately put Mikkel Pedersen (MRS GT-Racing) in front of him under pressure. In lap three, the 20-year-old overtook the Dane, which the Italian from Misano Adriatico defended until the flag. “In the final laps my tyres deteriorated more and more, so I didn’t want to take too much of a risk. This is my second podium finish after Silverstone and that’s of course fantastic,” said Drudi.

Behind Drudi, Ammermüller, as the current leader of the championship, headed into the race from fifth on the grid to ultimately bring home third place. In the seventh lap, the 32-year-old managed to overtake Pedersen then Porsche Junior Thomas Preining (A/BWT Lechner Racing). “That was a suspenseful race with tight gaps between the cars. I took a bit of a risk with the overtaking move and I was rewarded for it,” said Ammermüller. His teammate Preining saw the flag in fourth place. Over several laps, the 20-year-old treated fans in the packed Formula One grandstands to a gripping duel with Pedersen. In lap twelve, Preining squeezed past the 21-year-old in the first corner. “I was fast today and I waited for Mikkel Pedersen to make a mistake. My patience paid off and I’m thrilled to have earned 14 points towards the championship,” stated Preining. Dylan Pereira (L/Momo Megatron Lechner Racing) finished behind the Porsche Junior in fifth place, with Pedersen on sixth.

#PorscheMobil1Supercup – Checkered flag! @NickYelloly wins the race at Hockenheimring. It's the second win of the season for the Briton pic.twitter.com/Zke1uEz6J7

Starting from eighth on the grid, Porsche Junior Julien Andlauer (martinet by ALMERAS) from France managed to gain one position and was flagged off as seventh. “There were a lot of fierce duels and perhaps I could have risked a little more for a better result, but I didn’t want to risk crashing and end up empty-handed,” declared Andlauer. Jaap van Lagen (Fach Auto Tech) from the Netherlands achieved eighth place on the 4.574-kilometre racetrack. The top spot in the ProAm category was occupied by the Norwegian Roar Lindland (Lechner Racing Middle East).

After five races, Ammermüller heads into the second half of the season leading the championship. The Lechner driver ranks first in the standings after one victory with 81 points ahead of Yelloly in second. With two victories, the 27-year-old driver from Great Britain has earned 76 points. Pereira sits third place in the drivers’ classification with 58 points.

For round six, the Porsche Mobil 1 Supercup travels to Budapest from 27 to 29 July. The Hungaroring has hosted the international one-make cup series every year since its inaugural 1993 season.

In qualifying for round five of the Porsche Mobil 1 Supercup, Nick Yelloly (Fach Auto Tech) secured pole position. On Saturday, the British driver topped the time sheets with 1:43.379 minutes during his fastest lap on Germany’s Hockenheimring. “It couldn’t have gone better for me. I anticipated that the track would be better after the rain towards the end of the session. I managed to get a free run during my last lap and the strategy paid off,” said Yelloly. Taking up the race on Sunday alongside the Englishman on the first grid row is Mikkel Pedersen (MRS GT-Racing) from Denmark. Italy’s Mattia Drudi (Dinamic Motorsport) planted his Porsche 911 GT3 Cup on the third grid spot at the Hockenheimring Baden-Württemberg.

After rain fell at Hockenheim in the morning, the track was still wet at the beginning of the qualifying session. With a temperature of 20-degrees Celsius, all vehicles tackled the 30-minute session on wet tyres. The top time on the damp track was initially posted by Porsche Junior Thomas Preining (A/BWT Lechner Racing). The situation turned gripping in the last five minutes: Once the track surface dried, the drivers switched to slicks and lap times tumbled, with the names at the top of the time charts changed constantly. With the session almost over, Preining was in the lead and Yelloly and Pedersen were still out on their flying laps. At first Pedersen set a new best time, then Yelloly undercut the 21-year-old to snatch pole position. “I’ve never actually raced at Hockenheim before, so quite honestly I didn’t expect this. I’m really happy and I’m feeling optimistic for the race,” said Pedersen. The driver from the Danish town of Struer turned his best lap in 1:43.632 minutes and takes up the international one-make cup for the first time from the first grid row.

Drudi also posted his best time after the session had already finished. The driver from Misano Adriatico in Italy concluded his fastest lap in 1:43.895 minutes. “That was a really crazy qualifying session. It was lucky that I crossed the finish line just before the end of the session and could attempt another hot lap,” said Drudi. Preining lines up on the second grid row next to the Italian. The Porsche Junior drove a total of 14 qualifying laps, and turned his fastest lap on his 20th birthday in 1:44.131 minutes. “Basically I’m satisfied because I was fast today. I wish I’d had time for another fast lap because the conditions improved considerably towards the end,” said Preining.

The fifth grid spot is occupied by the current leader of the championship Michael Ammermüller (BWT Lechner Racing). Behind the German sits Dylan Pereira (Momo Megatron Lechner Racing) from Luxembourg. The seventh quickest time on the venerable 4.574-kilometre racetrack was claimed by seasoned Porsche specialist Jaap van Lagen (Fach Auto Tech). The Dutchman, however, received a penalty at the previous race in Silverstone and was relegated five places down the grid. Igor Walilko (MSG Huber Racing), a guest driver from Poland, starts from position seven.

Porsche Junior Julien Andlauer (martinet by ALMERAS) tackles the race in Germany’s Upper Rhine Valley from eighth place. In the final minutes of the qualifying, the 19-year-old Frenchman drove his best time in 1:44.798 minutes. “This was a difficult qualifying with changing conditions; we started on a wet track and towards the end it dried. I was on my fast lap shortly before the finish but I made a small error in the second sector,” said Andlauer. The best driver in the ProAm category was Roar Lindland (Lechner Racing Middle East) from Norway.

Round five of the Porsche Mobil 1 Supercup gets underway on Sunday at 12.05 hrs local time. Fans can watch the race via live timing and web radio on www.racecam.de. Eurosport broadcasts the race in more than 60 countries. Moreover, the TV channel Sky airs the international one-make cup series live in both the UK and Italy.

*has been moved five positions down the grid due to a penalty from the Stewards of Silverstone. 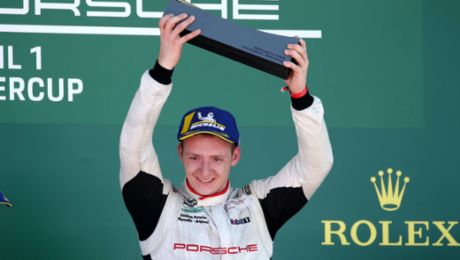 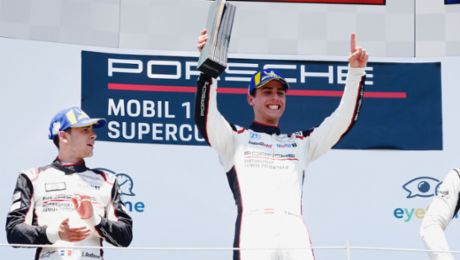 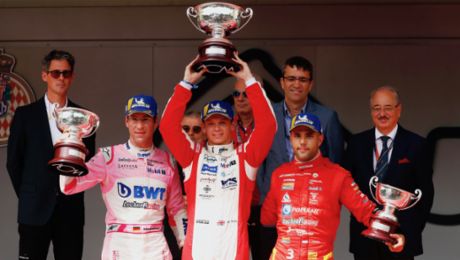 On the Circuit de Monaco, the Englishman has celebrated his maiden victory in the Porsche Mobil 1 Supercup.