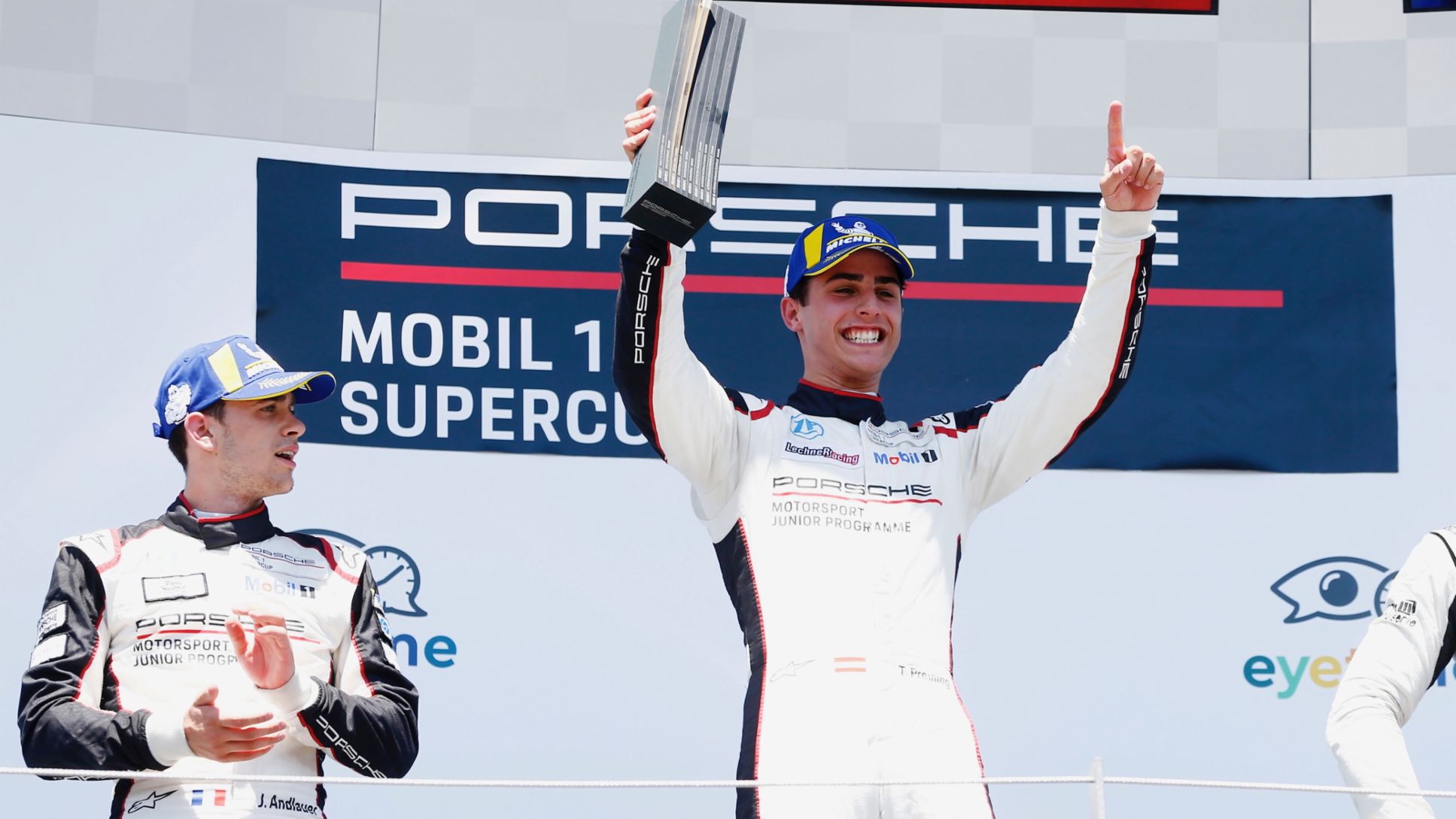 “That was one of the most intense races I’ve ever driven. Julien Andlauer and I fought hard for victory to the very last lap. It’s simply fantastic to wind up the weekend with a victory at my home race,” said Preining (BWT Lechner Racing). In summery conditions, Porsche Junior Julien Andlauer (martinet by ALMERAS) finished in second place on the Red Bull Ring. Behind the Frenchman’s Porsche 911 GT3 Cup, Florian Latorre (F/martinet by ALMERAS) took the flag in third.

Preining’s victory, however, was definitely not handed to him on a plate: Andlauer put in a catapult start from third on the grid to snatch the lead in the first lap. In lap two the safety car came out, which kept the field tight. 19-year-old Andlauer managed to retain his lead position after the restart, however Preining stuck close to his bumper. The two junior drivers treated spectators on the packed Formula One grandstands to a gripping duel for the lead. Right up until the penultimate lap, Andlauer defended his top spot, until Preining found a gap and overtook him. The local hero gave his rival no chance for a counterattack and swept over the finish line in first. “The race gave fans some great entertainment. Of course I would have preferred to win, but Thomas Preining was simply faster. I’m thrilled to have earned important points towards the championship,” said Andlauer. The reigning champion of the Porsche Carrera Cup France was presented with the trophy on the podium by Porsche’s ambassador Mark Webber.

The Spielberg race marked the first outing of the VIP vehicle in this year’s Porsche Mobil 1 Supercup. At the wheel of the vehicle run by Porsche AG sat the reigning Dakar Rally champion Matthias Walkner. For the motorbike star from Austria, this was his first race in a Porsche 911 GT3 Cup. After taking up the race from 30th on the grid, 31-year-old Walkner ultimately saw the flag in 29th. “That was a really cool experience with a lot of action. I had a great duel out on the track. It was fun,” said Walkner.

Ammermüller first in the championship

First in the championship after three rounds is Ammermüller from Germany with 47 points. Second place is occupied by Pereira with 46 points. Ranking third, 27-year-old Yelloly has 44 points to his credit.

The Porsche Mobil 1 Supercup now travels to the UK to contest round four at Silverstone from 6-8 July. The VIP vehicle with the starting number 911 will again run on the tradition-steeped racetrack north of London. Taking the wheel of Porsche AG’s race car is Chris Harris, a show host for the British motoring magazine Top Gear. Harris also has the YouTube channel “Chris Harris on Cars” with over 400,000 subscribers.

Next race on Silverstone Circuit

The race in rural Northamptonshire is also the home race for four British drivers contesting the international one-make cup series: Josh Webster from Stowmarket, and Nick Yelloly from Solihull as well as Tom Sharp (Surrey) and Mark Radcliffe from Rufford, both competing for the Surrey-based IDL Racing squad. Guest drivers from the Porsche Carrera Cup Great Britain will bolster the grid at the race on the storied Silverstone Circuit.

Points standings after 3 of 10 races:

How the qualifying went

During Saturday’s qualifying session, Preining planted his 485 hp Porsche 911 GT3 Cup on pole position with a time of 1:30.574 minutes. “Setting pole at my home race feels fantastic. Performing well in qualifying always gives you confidence. Obviously my aim is to win on Sunday,” said Preining. Tackling the race from the second grid spot alongside the Austrian is Porsche Junior Julien Andlauer (F/martinet by ALMÉRAS). Andlauer’s compatriot Florian Latorre (martinet by ALMÉRAS) achieved the third quickest time.

In sunshine and a temperature of 23-degrees Celsius, 32 Porsche 911 GT3 Cup took up the hunt for top times in the 30-minute qualifying session. Preining posted his best time on his first set of tyres after 14 minutes. However, almost all of the drivers turned their fastest lap on the second set of rubber, treating spectators on the Formula One grandstand to a gripping qualifying finale. With just three minutes left on the clock, 19-year-old Preining turned the fastest lap of the day. For the youngster from Linz, this is his first pole position in the Porsche Mobil 1 Supercup. Immediately afterwards, Andlauer posted his fastest time to secure the second grid spot in a time of 1:30.784 minutes. “It was challenging to turn a fast lap with so many cars on the track. The gap between the drivers was very small, so a first grid row spot is a good basis for the race,” said the young race driver from Lyon.

Twenty-one-year-old Latorre from France concluded the qualifying on the 4.318-kilometre rollercoaster circuit with the third fastest time. “I’m thrilled with this position. Still, what’s important is to repeat this performance in the race. This qualifying showed that we are good for a top position,” said Latorre. The driver from Bordeaux was also the best rookie in qualifying. P4 on the grid is occupied by Larry ten Voorde (NL/Team Project 1) ahead of Zaid Ashkanani (KWT/MRS GT-Racing). Germany’s Michael Ammermüller (BWT Lechner Racing) takes up the race from sixth. The qualifying results are a reflection of just how competitive the Porsche Mobil 1 Supercup is: In the qualifying session, the first 17 drivers were separated by less than a second.

This weekend marks the first outing in the 2018 season of the VIP vehicle with the starting number 911: for the race in Styria, 31-year-old Matthias Walkner takes the wheel of the race car. The Austrian won the motorbike category of this year’s Dakar Rally and this weekend contests his maiden race in a Porsche 911 GT3 Cup. Walkner starts the race on Sunday from position 30. “The qualifying session was great fun. Over the course of the session I managed to take more and more momentum from the straights into the fast corners. I’ll now take some time to look at my laps, but most of all I want to enjoy the race on Sunday,” said Walkner.

Four Austrians tackle the Spielberg round of the Porsche Mobil 1 Supercup on Sunday: Joining Porsche Junior Preining and VIP driver Walkner on the track are Philipp Sager (MRS-Cup Racing) and guest driver Luca Rettenbacher (MSG Huber Racing). Sager from the town of Peggau posted second place in the ProAm class. Rettenbacher from Eugendorf takes up the race from P17.

Round three of the Porsche Mobil 1 Supercup gets underway on Sunday at 12.15 hrs local time. Fans can watch the race via live timing and web radio on www.racecam.de. Eurosport broadcasts the race in more than 60 countries. Moreover, the TV channel Sky airs the international one-make cup series in both the UK and Italy.