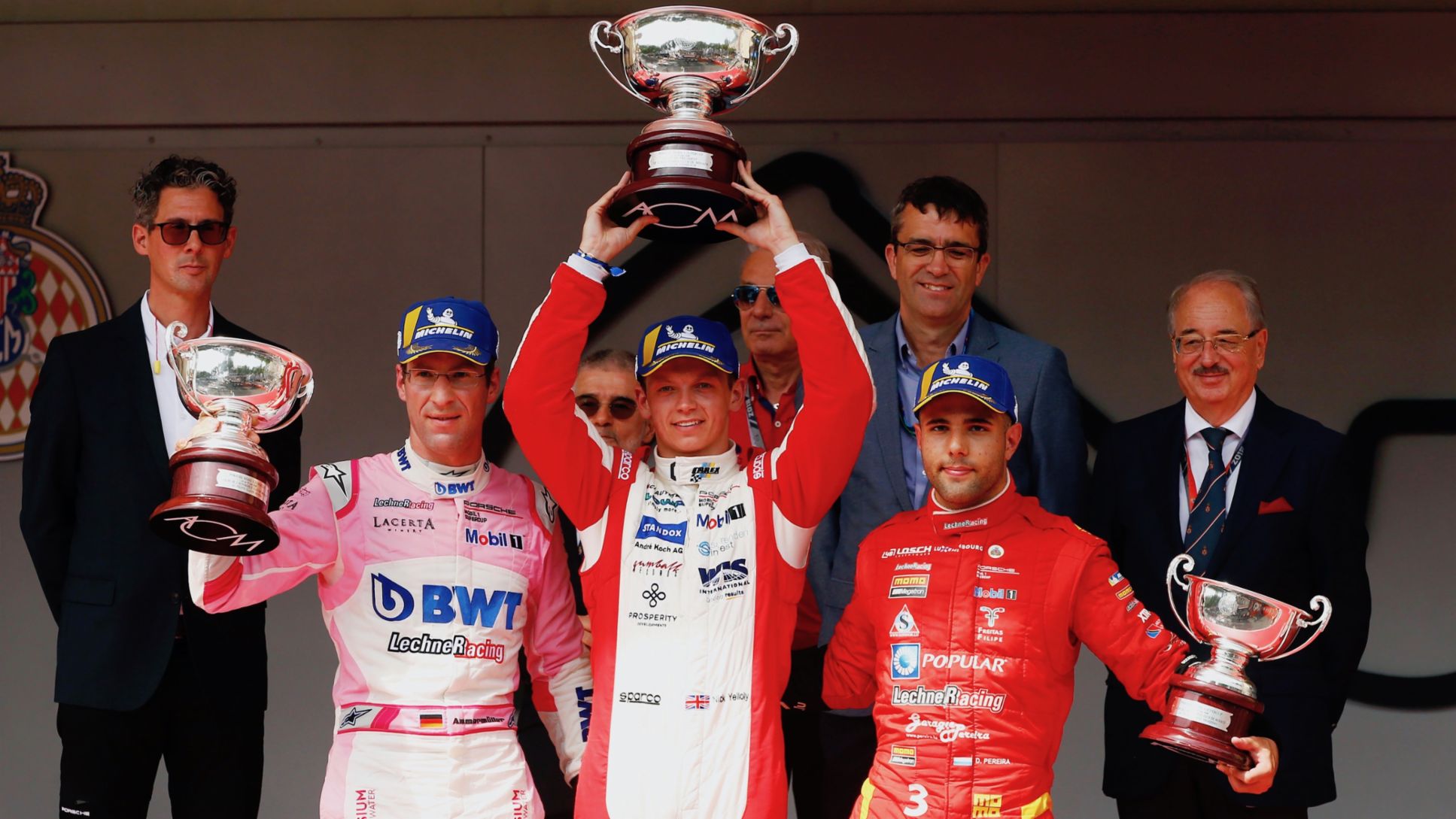 A special triumph for Nick Yelloly: On the Circuit de Monaco, the Englishman has celebrated his maiden victory in the Porsche Mobil 1 Supercup on Sunday.

At round two of the international one-make series, Michael Ammermüller (BWT Lechner Racing) from Germany followed Yelloly over the line in second at the wheel of his Porsche 911 GT3 Cup racer. The third podium spot was occupied by Dylan Pereira (Momo Megatron Lechner Racing) from Luxembourg. “Monaco is the highlight of the season for me so I’m absolutely thrilled. Things became really exciting towards the end but I didn’t leave a gap for Michael Ammermüller,” said Yelloly. Dr Frank-Steffen Walliser, Vice President of Motorsport and GT Cars, presented the trophies on the podium.

The 27-strong field rolled onto the grid on Sunday in 24-degree-Celsius temperatures and sunshine. After turning the fastest lap in qualifying, Yelloly took up the race from pole position. When the lights turned green, the racing driver from Solihull in England initially pulled clear of the field. However, over the course of the race, Ammermüller, who had started from second on the grid, closed the gap to just one-tenth of a second. The duo treated spectators sitting in the Formula 1 grandstands to a gripping final sprint. Ammermüller waited for Yelloly to make a mistake, however the Fach Auto Tech driver defended his lead to sweep over the finish line in first after 16 laps. Ammermüller, a seasoned Porsche specialist, took the flag in second place just two-tenths of a second behind Yelloly. “That was a great race. It would have been too risky to try and overtake and a mistake would have cost me a lot of points in the championship. Second place is a great result,” said Ammermüller.

Third place on the 3.337-kilometre street circuit went to Pereira. The 20-year-old took off from fourth on the grid and in the first lap immediately overtook Zaid Ashkanani (MRS GT-Racing) from Kuwait. “The key to success was the start. I prepared for this with reaction training and that paid off,” said Pereira. Fourth place was secured by Jaap van Lagen (Fach Auto Tech) from the Netherlands. The Dane Mikkel Overgaard Pedersen (MRS GT-Racing) finished in fifth place ahead of Ashkanani.

After setting ninth in qualifying, the Porsche Junior Julien Andlauer (martinet by ALMERAS) from France took the flag in tenth place. This race was the debut for the 18-year-old on the demanding racetrack at the Côte d’Azur. “That was an intense race with a lot of cars on the track, especially in the tight corners. The gap between the vehicles in the midfield was minimal, so I had to keep my wits about me the entire time. I would have liked to gain more ground, but unfortunately I couldn’t find a gap to overtake,” said Andlauer.

This was also the first race on the Formula 1 racetrack in Monte Carlo for the Porsche Junior Thomas Preining (BWT Lechner Racing). The youngster from Linz in Austria headed into the race from position 16 and managed to make up two places. “After the qualifying it became clear that it would be a tough race. I tried to put pressure on the drivers in front of me, but no one made a mistake,” said the 19-year-old. The best driver in the ProAm classification was Roar Lindland (N/Lechner Racing Middle East). Second place in the category went to Christof Langer (D/Fach Auto Tech) ahead of Philipp Sager (A/MRS Cup-Racing).

After two races, Ammermüller leads the championship with 38 points, followed by Yelloly and van Lagen both with 32 points. The best ProAm driver, which is the classification for amateur drivers, is Lindland with 40 points followed by Langer and Nicolas Misslin (F/Pierre martinet by ALMERAS). In the team category, Fach Auto Tech ranks first with 64 points. From 29 June to 1 July, the Porsche Mobil 1 Supercup will visit the Red Bull Ring in Austria, a rollercoaster circuit in Styria. Round three of the international one-make cup marks the home race for the Lechner Racing team and Porsche Junior Preining from Linz. The VIP car with the starting number 911 will line up on the Red Bull Ring. At the wheel of the race car fielded by Porsche AG is the current Dakar rally champion Matthias Walkner.

“Pole position is particularly important in Monaco so I’m very happy. Compared to free practice I took a little more risk and I was rewarded,” said Yelloly (Fach Auto Tech). Taking up the race alongside the 27-year-old is Michael Ammermüller (D/BWT Lechner Racing), who planted his Porsche 911 GT3 Cup on the second grid spot. The third grid spot on the legendary street circuit at the Côte d’Azur is occupied by Zaid Ashkanani (KWT/MRS GT-Racing).

The 27-strong field headed to the qualifying session on the Monte Carlo racetrack in 20-degrees Celsius and cloudy conditions. On his first set of tyres, Ammermüller posted the fourth quickest time. After all drivers switched to fresh rubber in the second half of the qualifying, Yelloly clocked the fastest lap of the day six minutes before the end of the session. Ammermüller also managed to improve on his time in the final minutes and turned the second quickest qualifying lap in 1:34.363 minutes. “Shortly before the finish I attempted another flying lap but unfortunately I couldn’t complete it because the red flag came out. Things were extremely close out there, so I’m pleased with position two,” stated Ammermüller. The qualifying was red-flagged a minute before the end of the session.

From third place, Zaid Ashkanani (KWT/MRS GT-Racing) takes up the only street circuit race on the Porsche Mobil 1 Supercup calendar. With just two minutes left, the 24-year-old from Kuwait City set the third quickest time in 1:34.475 minutes. “We had a good strategy and I encountered only a bit of traffic. I like this track and I came fourth here last year. Every race driver dreams of driving here in this special atmosphere. I’m very much looking forward to the race on Sunday,” said Ashkanani.

For Porsche Junior Julien Andlauer (martinet by ALMERAS), this marks the first time on the Circuit de Monaco. The young French driver posted the ninth quickest time with 1:35.325 minutes. “To be honest, the qualifying didn’t go as I’d imagined. This circuit is incredibly challenging and the packed field make it very tight. Still, I’m feeling confident that I can improve on Sunday,” said the 18-year-old Frenchman.

Porsche Junior Thomas Preining (BWT Lechner Racing) tackles the race from position 16. This is also the 19-year-old Austrian’s maiden race on the storied racetrack. Preining turned his fastest lap in 1:36.243 minutes. “Unfortunately I didn’t get a free run and I lost a lot of time. My grid position is not great, especially for Monaco, because it’s only really possible to overtake on this narrow circuit when the guy in front makes a mistake,” said Preining.