The Porsche Carrera Cup Deutschland has a new championship leader: Thanks to his fifth win of the season, Porsche Junior Thomas Preining now leads the overall standings after eight races. The race at the Nürburgring at a glance.

The Austrian Thomas Preining (BWT Lechner Racing) won Sunday’s race at the Nürburgring, beating his closest rival Michael Ammermüller (D/BWT Lechner Racing). Although the two Lechner drivers are tied for points, Preining ranks first thanks to his higher number of wins. “Victory and now points’ leader – I couldn’t be happier. My start was great and I managed to pull clear of the field,” said Preining. After Jaap van Lagen (Förch Racing) won Saturday’s race, the Dutchman finished round eight in third.

This weekend, the Porsche Carrera Cup Deutschland celebrated its premiere as support to the AvD Oldtimer Grand Prix. As part of the festival for historic vehicles, a total of 27 Porsche 911 GT3 Cup racers rolled onto the grid. In sunshine and a temperature of 24-degrees Celsius, Preining led the field of 485-hp nine-elevens into the race. From the second grid spot, Ammermüller made an excellent start, however the driver from Linz was even faster and defended his lead. As the race progressed, the pair broke away from their competitors. Ammermüller waited for the 20-year-old to make a mistake, however Preining held his ground to score a lights-to-flag victory after 16 laps. Seasoned Porsche specialist Ammermüller swept over the line in second, 1.5 seconds behind. “Unfortunately I didn’t manage to get past Thomas Preining at the start and during the race there was no chance to make a serious attack,” said Ammermüller.

Van Lagen, the winner of the previous day’s race, started from third on the grid and defended his position to the flag. “Two podiums on one weekend is a super result. I attempted to stick to Michael Ammermüller’s bumper but there was no chance. The important thing was that I managed to hold my own against Larry ten Voorde,” declared the Förch driver. Dutchman Larry ten Voorde (Team Deutsche Post by Project 1) finished fourth on the storied circuit in the Eifel, with fifth place going to the best rookie, Dylan Pereira (Lechner Racing) from Luxembourg.

After eight races, Preining now leads the championship of the Porsche Carrera Cup Deutschland. Scoring five wins, the youngster earned 159 points. Despite being tied for points, Ammermüller has only two wins to his credit and therefore ranks second. Ten Voorde lies third with 106 points. Leading the rookie class is Pereira with 134 points. With 172 points, Schmidt-Staade is the leader of the amateur classification.

The next double-header of the Porsche Carrera Cup Deutschland will be contested as support to the ADAC GT Masters. From 17-19 August, the national one-make cup travels to the Circuit Park Zandvoort on the Dutch North Sea coast. These two rounds will be home races for ten Voorde (Boekelo) and van Lagen from Ede.

Round seven of the Porsche Carrera Cup Deutschland was electrifying from start to finish: Jaap van Lagen (Förch Racing) crossed the finish line first at Saturday’s race in the Eifel 0.3 seconds ahead of Porsche Junior Thomas Preining (A/BWT Lechner Racing). This marked the first win of the season for the Dutchman Jaap van Lagen. “I had a sensational start and that was the key to success. After the start, the race turned pretty tough and my rivals kept me under constant pressure. I was really happy to see the chequered flag,” said van Lagen. Third place went to the current leader in the championship Michael Ammermüller (D/BWT Lechner Racing) in his 485 hp Porsche 911 GT3 Cup.

For the first time in its 29-year history, the Porsche Carrera Cup Deutschland was contested as support to the AvD Oldtimer Grand Prix. The classic car festival is one of the world’s most popular events for historic vehicles and attracts a large number of motor racing fans to the Eifel. In 20 degrees Celsius and sunshine, Preining took up the race from pole position. Starting from the second grid spot, Van Lagen took the inside lane in the first corner and, thanks to a catapult start, swept past Preining. Ammermüller on the third grid spot completed the leading pack, with these three delivering a gripping fight over 16 laps to the flag. In lap eleven Ammermüller managed to get past his teammate, but a counterattack saw Preining retake P2 in the penultimate lap. Preining then set his sights on the leading van Lagen, however the seasoned Porsche specialist managed to successfully fend off all attacks to the finish. “I got away well at the start, but Jaap van Lagen was even faster. I tried everything to overtake him. Jaap showed his experience and resisted my attacks with a tough but fair fight,” said Preining.

Ammermüller took the flag 0.6 seconds shy of Preining. So far this season the driver from Rotthalmünster in Germany has clinched podium results at six of seven races. “There was a lot of paint-swapping between the vehicles today and that was pretty risky. It was a difficult race, but ultimately I have to live with third place,” said Ammermüller. Fourth place on the storied circuit in the Eifel went to Larry ten Voorde (Team Deutsche Post by Project 1) from the Netherlands ahead of Igor Walilko (Raceunion), with the Polish driver concluding the race as the best rookie.

Sixth place was occupied by Toni Wolf (Car Collection Motorsport). Taking up the race from P15, the 19-year-old German launched an impressive charge through the field to achieve his best result of the season so far. His compatriot Richard Wagner from the Raceunion squad secured seventh place, with Jacob Eidson (USA/Team Project 1) claiming eighth on the 4.638-kilometre racetrack. Germany’s Stefan Rehkopf (Cito Pretiosa) scored first in the amateur class, relegating his compatriot and teammate Jörn Schmidt-Staade to second place. Third in the class went to Carlos Rivas (Black Falcon Team TMD Friction) from Luxembourg.

The Porsche Carrera Cup Deutschland enjoyed a visit from Magnus Walker. The avid Porsche enthusiast joined Volker Strycek, the host and AvD sports president, on the podium to present the trophies. Walker also waved the chequered flag at the Nürburgring.

After seven races, Ammermüller is the “half-time champion” of the Porsche Carrera Cup Deutschland. The 32-year-old leads the overall classification with two wins and 139 points. Preining sits second just five points in arrears. Third in the championship is occupied by ten Voorde. The 21-year-old has earned 93 points so far. The rookie class is led by Dylan Pereira (L/Lechner Racing) with 109 points. Schmidt-Staade ranks first in the amateur class with 156 points.

#CarreraCupDE - That's all from today! Race 8 of the season takes place tomorrow at @nuerburgring pic.twitter.com/szxbk6jyRm

Points standings after 8 of 14 races

Round eight of the Porsche Carrera Cup Deutschland will also run as support to the AvD Oldtimer Grand Prix. Preining heads into the race from pole position. The race starts on the Nürburgring at midday local time. 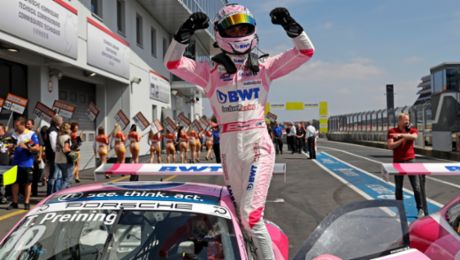 Thomas Preining is the winner of round six of the Porsche Carrera Cup Deutschland. 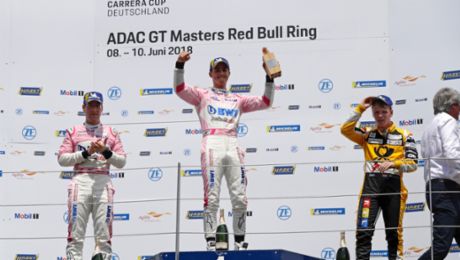 The Porsche Junior celebrated a special success at round three of the Porsche Carrera Cup Deutschland. 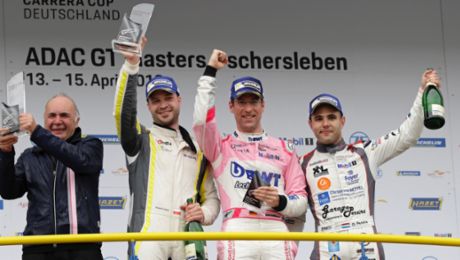