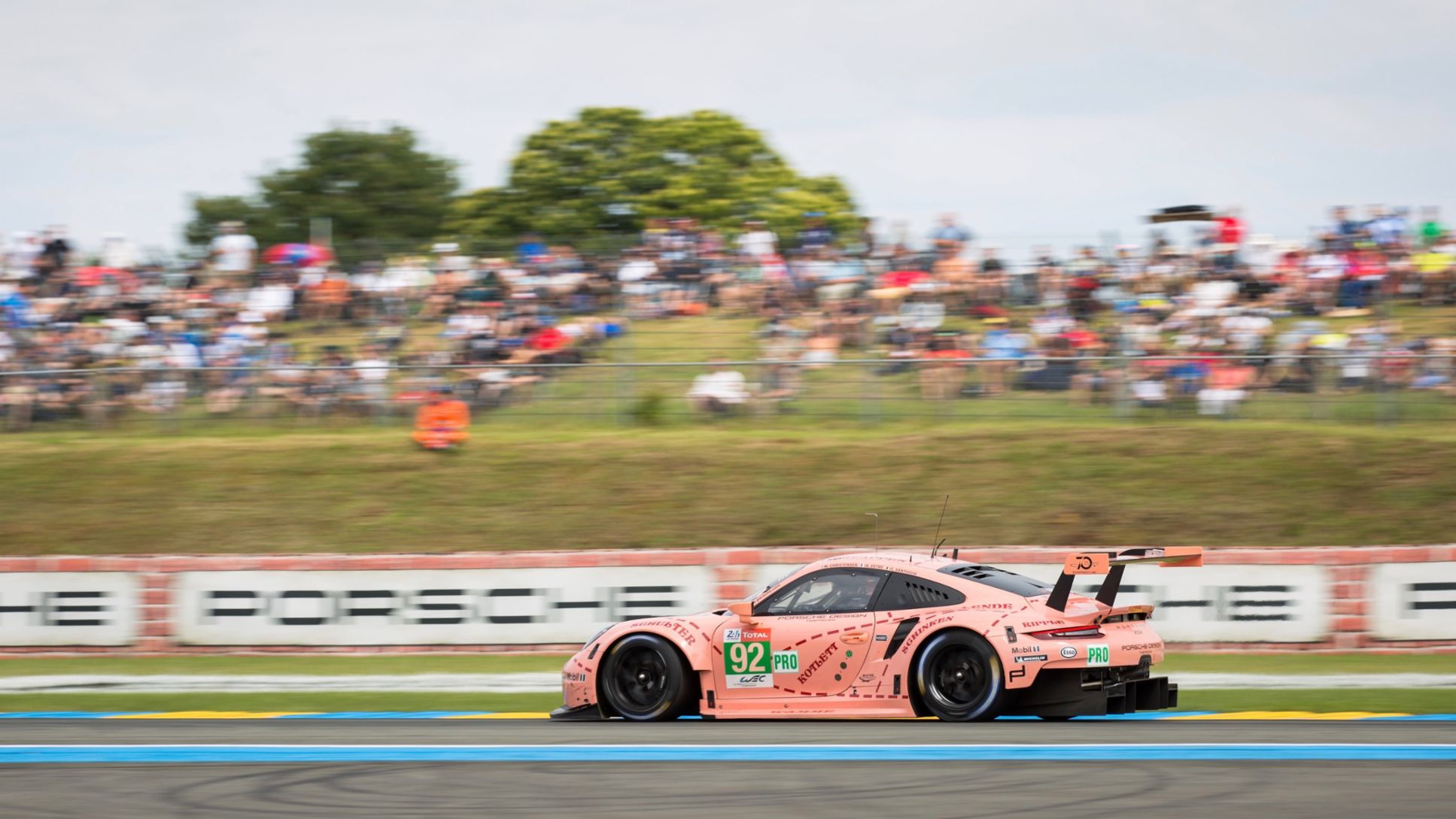 Porsche has won the 86th edition of the Le Mans 24 Hours in both the GTE-Pro and GTE-Am classes and has extended their lead in the FIA WEC Championship. The 24 Hours of Le Mans at a glance.

Porsche celebrates class win number 106 und 107 at Le Mans in its anniversary year “70 Years Porsche Sports Cars”. “We’re absolutely delighted that we were able to come out on top in this fierce competition against five other automobile manufacturers after starting from Pole Position. These two wins underline once again why Porsche is a record-holder at Le Mans,” says Dr Frank-Steffen Walliser, Vice President Motorsport and GT Cars. No other marque has secured as many successes at the world’s toughest long-distance race and is as closely linked to the legend of Le Mans as Porsche. 2013 marked the last time Porsche celebrated a double victory with the 911 RSR.

Last impressions from the race track in Le Mans:

Porsche fans in Zuffenhausen follow the race and keep their fingers crossed in the last few minutes of the race.

A look at the current status in the last hour before the finish.

#LeMans24 – Final hour at @24hoursoflemans. Keep your fingers crossed for #Porsche #911RSR No. 92 and No. 91. The cars are still running P1 and P2 in GTE-Pro #WEC #PinkPig #70YearsOfPorsche pic.twitter.com/8gayGO3nfy

We spent our Sunday morning with Patrick Dempsey – talking with him in his pit garage.

Comments on the start of the race in the press release (downloads).

🐓 Good morning! The day is dawning over at Dunlop 🌄#LEMANS24 #WEC pic.twitter.com/Ad2dkAm6kK

#LeMans24 – Some night-time magic from the @24hoursoflemans. Still 11 hours to go until the checkered flag comes out pic.twitter.com/5qMDvZaSWk

#LeMans24 – “It’s #PinkPig for Michael. Give it full beans out there, mate!” #Porsche #911RSR #WEC pic.twitter.com/1otJVZqglp

A few hours ago we had the chance to talk to Kevin Estre. See whats in his mind.

For those who don’t get the pun, Sau is German for pig and Sauger for naturally aspirated engine. #HereToHelp https://t.co/Z7cjhqkghk

Some rest after my 1st 3 stint. We’ve been lucky in some safety car phase but we put ourselves in this position leading the race... still a very long way to go. Keep fingers cross for the #baconbrothers 😋🐷🤞🏼 @24hoursoflemans @VanthoorLaurens @ChristensenMK @PorscheRaces pic.twitter.com/L3AhRrRS4D

Greetings from the fans in Zuffenhausen.

#LeMans24 – Greetings from Zuffenhausen! Best of luck going into the night. @24hoursoflemans pic.twitter.com/sVV6fQ4omA

After five hours of racing in Le Mans, there are three Porsche 911 RSR among the Top 4.

The “Pink Pig” is still in the lead after the safety car left the track.

The safety car is on the track.

The 911 Turbo will be the safety car for the Sports Car World Endurance Championship (WEC) until 2020. The details.

A perfect start for the Porsche 911 RSR at the 86th edition of the long-distance classic at Le Mans. After two hours, the #92 vehicle leads the GTE-Pro field, with the (#91) 911 RSR following in position two. The two Porsche 911 RSR with the starting numbers 93 and 94 also hold promising prospects in the race.

In the GTE-Am class, the Porsche 911 RSR racers also got away well into the Le Mans 24-hour race. The cars fielded by Dempsey-Proton Racing (#77 und #88) and Proton Competition’s #99 vehicle have settled in amongst the frontrunners at the world’s toughest long-distance race, which finishes on Sunday at 3pm.

Comments on the start of the race in the press release (downloads).

The race has started!

#LeMans24 – And off they go: The race is underway at the Sarthe track. 10 #Porsche #911RSR are on track @FIAWEC @24hoursoflemans pic.twitter.com/sQP9IplWxh

Porsche gets ready for the 24 Hours of Le Mans.

It’s race day! I will start our Pink Pig today at 3pm from P2. So excited to do my 4th @24hoursoflemans and celebrate the 70th anniversary of Porsche! Cross fingers for the “Bacon Brothers” @ChristensenMK @VanthoorLaurens pic.twitter.com/422sMeTrgP

Get all information on TV coverage and live streaming in this article.

We’ve catched up with Christina Nielsen yesterday evening and she opened up about what it feels like just before the race, to have a dad that drove at Le Mans and her message for girls who think they might like to be a racing driver themselves one day.

Getting in the mood

It would have been rude not to have had a little early morning drive to channel our inner Steve McQueen this morning. #LeMans24Hours pic.twitter.com/ZX5orIjG1x

Fans are cheering for the Porsche drivers at the traditional drivers' parade on the eve of the Le Mans 24 Hours.

Mark Webber gets us in the mood for the world’s toughest long-distance race.

Christina Nielsen’s love for speed beganin the cradle. Today, she lives out her dream on the world’s race tracks. 2018 will see the Danish driver take on the 24 Hours of Le Mans in a Porsche. More about the only female driver in the new episode of 9:11 magazine.

Gianmaria Bruni lapped the 13.626-kilometre circuit in 3:47.504 minutes. Never before has a GT vehicle turned a faster lap at Le Mans. This puts the Italian and his teammates Richard Lietz (Austria) and Frédéric Makowiecki (France) on pole position for the 24-hour race. The #92 Porsche 911 RSR driven by Michael Christensen, who also posted his fastest lap in the first qualifying, takes up the race from the second grid spot. The Dane shares the cockpit with Frenchman Kévin Estre and Laurens Vanthoor from Belgium.

Find more information like the qualifying results in the press release (downloads).

#LeMans24 – Gianmaria Bruni: “Celebrating a pole position at Le Mans with a record lap in the 70th year of Porsche makes me very happy. From the mechanics at the track to the engineers at Weissach, we should all be proud. It’s great to be a part of this fantastic team.” #magiclap pic.twitter.com/oF5s61dvEi

Dr Frank-Steffen Walliser, Vice President Motorsports and GT Cars: “All our vehicles are performing well and have been very reliable. The qualifying results are great with the fastest time in the GTE-Pro class and positions one, two and three in the GTE-Am class. As race preparation this is good because it has a calming effect and shows where we stand. Gianmaria Bruni’s fastest lap was simply magic. Everything came together perfectly: no mistake, little traffic and slipstream. You see from the times how close the competition is and how tough things are out there. Unfortunately this also led to some trips off the track. The #94 was badly damaged, but the car will be back on its wheels in time for the race. 24 hours is a long time, so it’s certainly important to avoid making mistakes.”

Pascal Zurlinden, Director GT Factory Motorsport: “The track was a little slower during the final qualifying, however two of our cars managed to improve their times. We’re facing very strong opposition, but we have four fast cars with experienced teams and drivers. Our goal is to perform consistently and win the race.”

In his very first lap, start driver Gianmaria Bruni set a phenomenal time of 3:47.504 minutes in his #91 Porsche 911 RSR, a time that none of his opponents could even come close to. The Italian’s 510 hp racer was setup specifically for a fast lap and benefited from the fact that the 13.626-kilometre circuit has become significantly faster compared to last year. Bruni’s vehicle then suffered a puncture and was unable to continue. However, he and his teammates Richard Lietz (Austria) and Frédéric Makowiecki (France) managed to retain the top spot in the first qualifying session at the toughest long-distance race in the world.

Behind the trio, Michael Christensen (Denmark), Kévin Estre (France) and Laurens Vanthoor (Belgium) planted their #92 Porsche 911 RSR on second. The two other 911 RSR that will contest the GTE-Pro class at the 86th edition of the Le Mans 24 Hours posted the sixth and seventh quickest time.

Find more information like the qualifying results in the press release (downloads).

The 24 Hours of Le Mans, regarded as the toughest automobile race in the world, enjoys a long and illustrious tradition. Initiated in 1923 as the Grand Prix d’Endurance de 24 Heures, Porsche first took on the challenge of the world’s largest motorsport event in 1951. Legendary corners such as Mulsanne and Tertre Rouge and chicanes flow into high-speed passages like the Mulsanne Straight. Adding to the legend is the fact that the 13.626-kilometre course is a combination of permanent racetrack and everyday national roads. Even Hollywood has paid tribute to the race with the 1971 film “Le Mans” featuring Steve McQueen in the lead role.

The works squad travels to round two of the FIA Sports Car World Endurance Championship (WEC) as the leader of the Manufacturers’ Championship. In the 60-strong field, four customer teams campaign six additional 911 RSR from Weissach. In the GTE-Pro and GTE-Am class, the Porsche 911 RSR clocked the fastest lap times at the test day on 3 June.

For the Porsche 911 RSR, 2018 marks the second outing at the long-distance race. In its 2017 debut season, the race car from Weissach narrowly missed out on a podium spot, finishing fourth at the Le Mans 24 Hours. Depending on the restrictor, the water-cooled four-litre flat-six engine puts out around 510 hp. The newly developed race car celebrated its premiere in 2017 at the 24 Hours of Daytona. A large rear diffuser combined with a top-mounted rear wing generates high downforce and provides aerodynamic efficiency.

Live and on all channels

Well prepared for the 24 Hours of Le Mans

Porsche is ready to tackle the long-distance classic at the Sarthe. During official tests, a Porsche 911 RSR ranked first in both the GTE-Pro and GTE-Am class. The preview of round two of the FIA Sports Car World Endurance Championship WEC is available here.

Up-to-date information from the two Porsche GT Teams and customer squads can be found on www.vimeo.com/porschenewsroom.

All sessions and preparations are covered on the Twitter channel @PorscheRaces. Information, photos and videos from the race as well as a look behind the scenes of the Porsche teams are offered here. On the Instagram account @porsche_newsroom the latest photos and videos will be uploaded constantly.

Eurosport 1 broadcasts the 24-hour race live and free-to-view. The TV channel also airs the free practice and qualifying sessions. These live broadcasts are supplemented by background reports and race analyses from Tom Kristensen. Using virtual tools, the Le Mans record winner provides a commentary of the race action. Sport1 televises highlights of the Le Mans 24-hour race in a 60-minute programme on Monday, 18 June, from 23:00 hrs. This sports channel also provides online clips of the race at www.sport1.de. The FIA WEC App is free in its basic version. For a fee, however, the app offers a live stream of the 24-hour race. 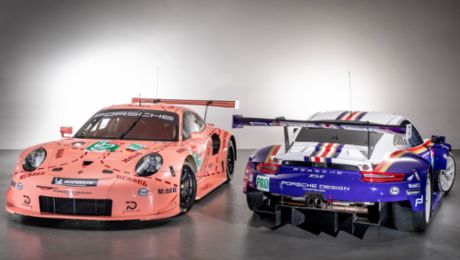 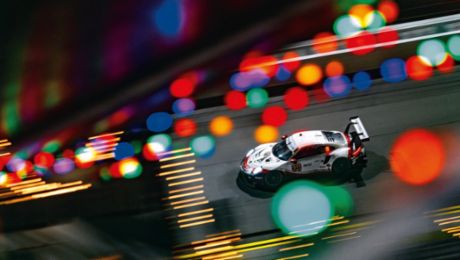