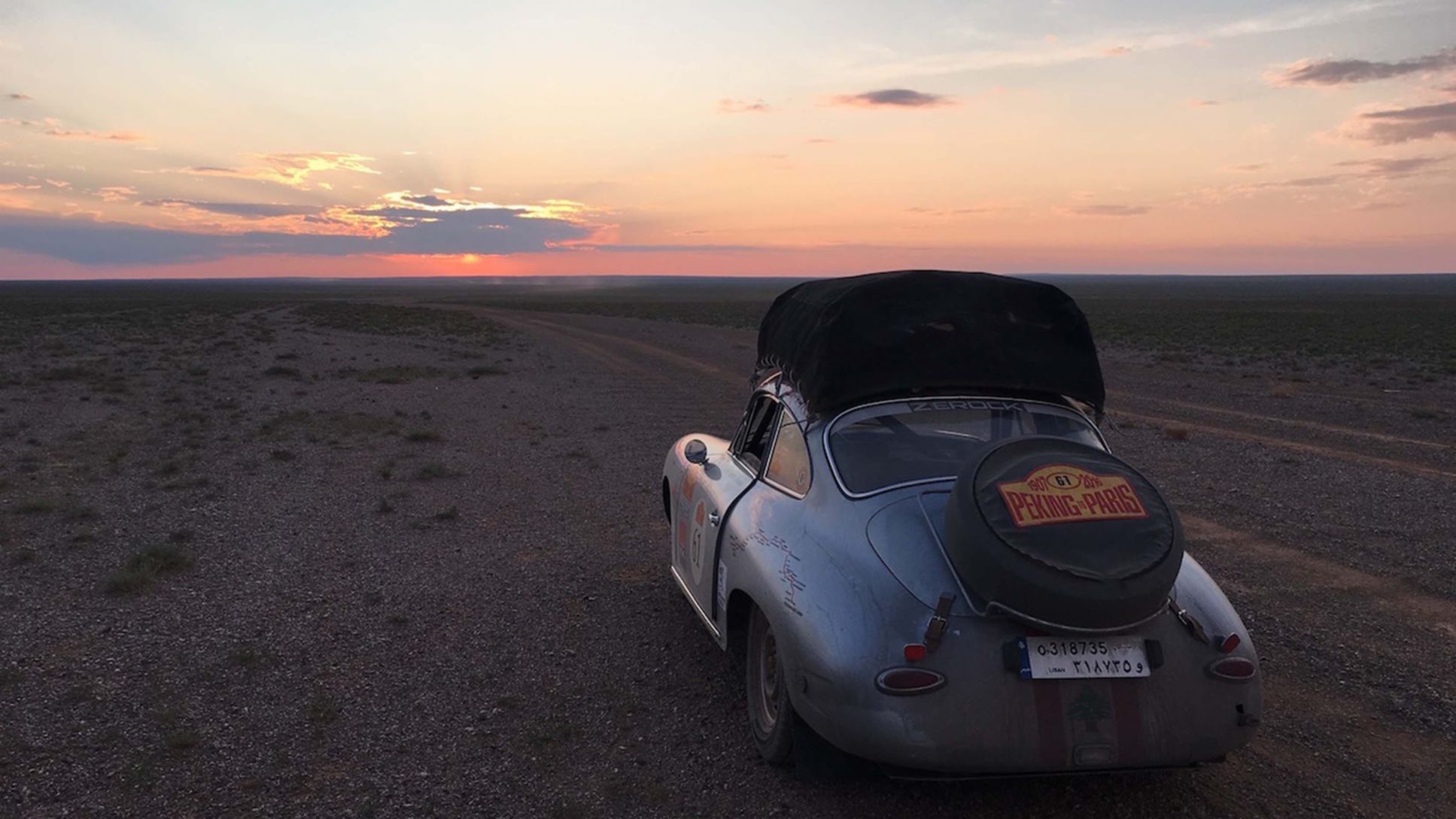 Icy cold, searing heat and challenging routes – in the Peking to Paris Motor Challenge 2016, 120 classic vehicles cover the total distance of 13,695 kilometres within a month. Among them is also a Porsche 356C.

“The rally is being very challenging. Crossing the desert is very tough because of the conditions,” explains Charbel Habib. The 46-year-old construction engineer and his team-mate Walid Samaha have already been on the road since 12 June. They are competing in the Peking to Paris Motor Challenge with a Porsche 356C dating from 1964.

Teams from a total of 20 nations – Habib and Samaha are representing Lebanon – cover stages between 180 and 668 kilometres every day. The route takes in Mongolia, Russia, Belarus, Poland, Slovakia, Hungary, Slovenia, Italy and Switzerland, before heading to Paris, where the competitors cross the finishing line on 17 July. Vehicles are divided into two categories according to production date: pre-1975 and pre-1941.

Drivers and cars alike have to face considerable demands along the route. And it’s no different for Charbel Habib and Walid Samaha’s Porsche 356C. Through the heat and the cold, the automotive legend makes its way over unmade roads and across difficult terrain. Assaad Raphael, Chairman of Porsche Centre Lebanon, knows that the two members of the Porsche Classic Club are well aware of their vehicle’s past: “It’s exciting to watch how the two of them are extending the history of this legendary car. We wish them all the very best and a lot of staying power for the Motor Challenge.”

You can follow the team with start number 61 on the Peking to Paris Motor Challenge 2016 right here. The travel diary of Charbel Habib gives you an impression of how the team expericences the rally:

We were surprised to be the only participants whose car is in its original shape without any tuning.

Our challenge is to master the rally with our Porsche car which has been kept in its original state and hasn’t been changed since it left the factory in 1964. The only modifications made were for security reasons, such as replacing the seat belts. Everything else has been kept intact.

Day two was all about getting out of the city and ever closer to Mongolia.

The rally has been very challenging so far: crossing the desert is very tough with this car and in these conditions (e.g. dust).

Today, we reached Mongolia. This country is what most of our adventurers have been waiting for.

Mileage: 1793 km (including one rest day)
Route: From Undurshireet to Chjargas Lake (Mongolia)

Our car needed to be pulled out of a few sandy sections. All the cars are strong though, with good crews, and tonight, some midnight oil is being burned to get them all sorted out for tomorrow.

After 10 days and more than 3,200 kilometers, we crossed the Mongolian border into Russia. Mongolia was very tough physically, since we were driving for 11 to 12 hours in difficult terrain. If you get distracted just for a second, you can hit a big stone that may damage the car. The camp was good, but we had to do maintenance until midnight every day.

Our mighty 356C still looks unbeatable and has proven that all errors in driving and navigation are no longer an issue.

The first two days in Russia were very difficult because we had serious problems with the Porsche. In Mongolia, the petrol was 80 octane, which had a big toll on our engine, and the firing was neither good nor consistent, which affected the electrical system and the valves of the engine. Additionally, on the last day in Mongolia, we had a clutch problem due to the dust and vibration. Walid stayed up until 2 a.m. to solve this problem. Despite the difficulties, we did not miss any of the targets and are still on course.

Today, we are in Novosibirsk in order to rest and carry out repairs on our car. Walid has been working on it since 8 a.m. and, supposedly, will not be finished before 10 p.m. He is reviewing the clutch, checking a noise coming from a shock absorber and the engine valves. Moreover, he has to repair the engine guard, as it almost touches the bottom plate, check the disks and breaks, change the oil and tires and a few other things, as well.

Today was a bad day. The engine is consuming a lot of oil and making noise. Still, we have been on time so far without any mistakes.

We have analyzed the reason behind the noise: during one of the tough Mongolian days, we opened the engine bay and saw that the two air filters had fallen off of the top of the carburetors due to heavy vibration. It seemed like the engine had sucked lots of dust.

Plan A is that a friend will bring the needed engine parts to Kazan where we meet on Friday for our next rest and maintenance day. If this doesn’t work out, Plan B is to have a replacement engine waiting for us in Poland. Admittedly, this plan sounds quite risky and I'm afraid we won’t actually be able to drive as far as Poland. In the meantime, Walid is trying to find some solution in order to delay the problem on the engine.

Our car is doing fine, but we we still need to cover 1000 km before we reach Kazan. A Russian guy will finally be able to bring the needed engine parts so that on Friday we can carry out all the repairs.

As for our daily running, we are running slowly but without missing the time targets. Due to heavy rainfalls, the organizers don’t allow any speed higher than 90 km/h anyway. Our maximum is 85 km/h to keep the engine working.

We crossed the border between Asia and Europe today. The route led us via highways and provincial roads. The car is doing well despite the engine noise.

The Russian people are very enthusiastic about the rally and the cars. In two different cities people were waiting for us to pass.