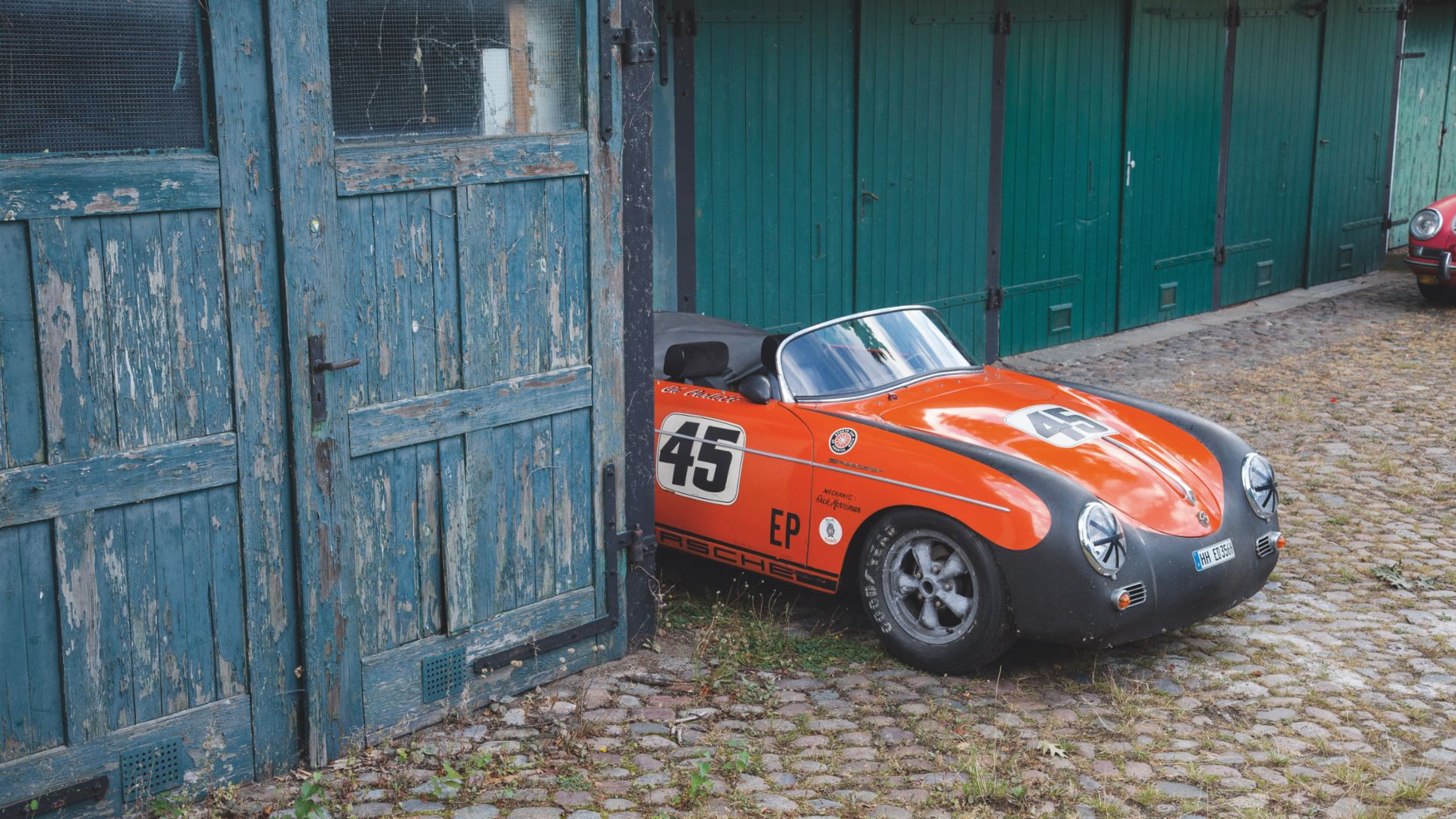 Birch trees are growing out of the tarmac at the Marlboro Motor Raceway, although the grandstands are just about still intact. Until 1974, racing royalty such as Mario Andretti, Roger Penske and Paul Newman drove here. And Jackie Stewart won the 12-hour race in a Lotus Cortina in 1964. “This race track closed down shortly after I retired from motorsport,” chuckles Edward Parlett, an 80-year-old privateer racer and veteran of this circuit. “I think that means I still hold the lap record here. And that is then a record forever.”

Parlett obtained his competition license at Marlboro, took part in his first race here and would go on to twice win its six-hour endurance events. He was one of the so-called ‘Philly gang’, a group of local racers including Bob Lorrailliere, Jack Heron, Nagle Bridwell and Ray Kraftson. Old pictures reveal them gathered around the 356 A 1600 Super Speedster that was Parlett’s long-standing and last racing car – and the car Ron Szasszer now owns.

Back in 2008, Szasszer was sitting on the sofa in his flat in northern Germany, surfing online car deals with one eye, watching TV with the other. “I didn’t really want to buy anything, and also not a Porsche,” he says with a smile. He grew up with cars, but not with any particular affiliation with Porsche. Photos of his father, who emigrated to Miami from Hungary, often show him leaning against giant Chevys, and Szasszer’s own first car was actually a buggy – which he built from two scrap Beetles.

Repairing instead of studying

The second was a Cali-look Oval Beetle with lowered suspension, in matt black and wearing outsized tyres. Later, while at university, Szasszer ran a workshop with his friend Jens Wilke in an old station building in the east of Hamburg, rebuilding Volkswagens for people in the East who desperately wanted to own something other than a Trabant after German reunification. He also bought himself an unfinished Jaguar E, but still the call of Porsche eluded him. The pair shut the workshop in 1996, by which time Szasszer was driving a Land Rover Series III. This was followed by a Mercedes Pagoda as his everyday car for eight years before he finally made the move and bought a 993.

“I have always had a weak spot for patina, for racing history, for starting numbers on doors,” he recalls of that moment of sofa surfing, “and somehow I must have been looking for that.” Eventually he came across a dealer in Austria selling this 356 A 1600 Super Speedster, built in 1957, in its original racing trim and orange paintwork. “There was hardly any description for it, and there was also no price,” says Szasszer. “There was just a comment that it had competed in many major races on the East Coast of the US and that it once belonged to a driver called Ed Parlett. For me, it was love at first sight.” He immediately made a down-payment. He thought it best not tell his wife for the time being ...

The modernisation of the 356 A 1600 Super Speedster

Once the not inconsiderable sum had been transferred, the dealer fetched the car from America and Szasszer then collected it from Austria. Back in Hamburg, he looked for a firm that would reinstall the engine and get it roadworthy. But he was keen not to change anything about the car’s appearance. It was impossible to avoid a certain amount of modernisation: the original racing bucket seat was replaced, space was created for a passenger, the large roll bar was also removed and the old fuel bladder made way for a metal tank. The wind deflector was also replaced by the original windscreen and Szasszer tracked down the old magnesium wheels, still with 50-year-old Goodyear rubber on them, which had been used by Parlett in the 1960s. It was only then that he began to research this hitherto unknown driver.

“There was only one hit for the name on the Internet, and that didn’t help me.” In the end it was his Business English teacher who was responsible for the breakthrough, arriving one day with the news that he had spoken to Parlett in the US. “Ed was alive! I was totally fascinated,” says Szasszer. Not a week later, he and his interpreter were on a plane to Maryland and the car’s story began to unfold.

“Parlett started racing at the beginning of the 60s,” Szasszer explains. “Following his mother’s advice, he had already bought a used 356 for everyday driving in 1959 as a student. Later, while working in the medical equipment industry, he got to know Nagle Bridwell, one of the Philly gang, who lured him into racing.” Bridwell stopped racing in 1965 and let Parlett have his 356 Speedster.

This precious gift met a sticky end in Limerock in 1969, however, and with the engine and transmission under his arm, Parlett set out to look for a new car. He found chassis number 84333 at friend Bruce Baker’s dealership. It was one of the last Speedsters built at Reutter in Stuttgart in December 1957 before being transported via Bremerhaven to Max Hoffman in New York. Baker had obtained the car from racer Dick Scarborough and Parlett continued its competitive legacy for many years.

Although not necessarily a natural talent behind the wheel, Parlett tinkered with things down to the very last detail. He designed the wind deflector and even installed a Super 8 camera in a wheel housing to see how the (frequently modified) chassis worked.

Badges in the car reveal that Parlett and his Porsche were the winners of the Barrel of Fun Rally in the PCA Chesapeake Region on 21 September 1963, as well as participants in the National Races on the Steel City International Raceway near Detroit at the end of September 1967 and the Appalachian National Rally in the Philadelphia Region in 1969. The busy and well-travelled pair were also class winners in the Bryar Nationals in New England in early September 1972.

Szasszer met up with Ed Parlett

Parlett retired from racing in 1975 and sold the car to TWA driver Jack Klinges in Bethlehem, Pennsylvania, who stored it in his barn until 2008 when Franz Wittner from Carcollection brought it to Austria. Szasszer finally returned it to the road in 2011 and frequently met up with Parlett during this time to better understand its history. In 2012, the race veteran gave Szasszer his helmet, as well as all the car’s old invoices and his detailed race records.

Sadly, Parlett died the following year but Szasszer has done much since to ensure his memory lives on. The Speedster, which still bears traces of rubber from its final race almost half a century ago, is driven regularly despite Hamburg’s less than perfect weather. And its dedicated owner now runs the United Garages Instagram account, where around 1,500 subscribers share their unifying passion for a Porsche with patina.

Technical specifications of the 356 A 1600 Super Speedster