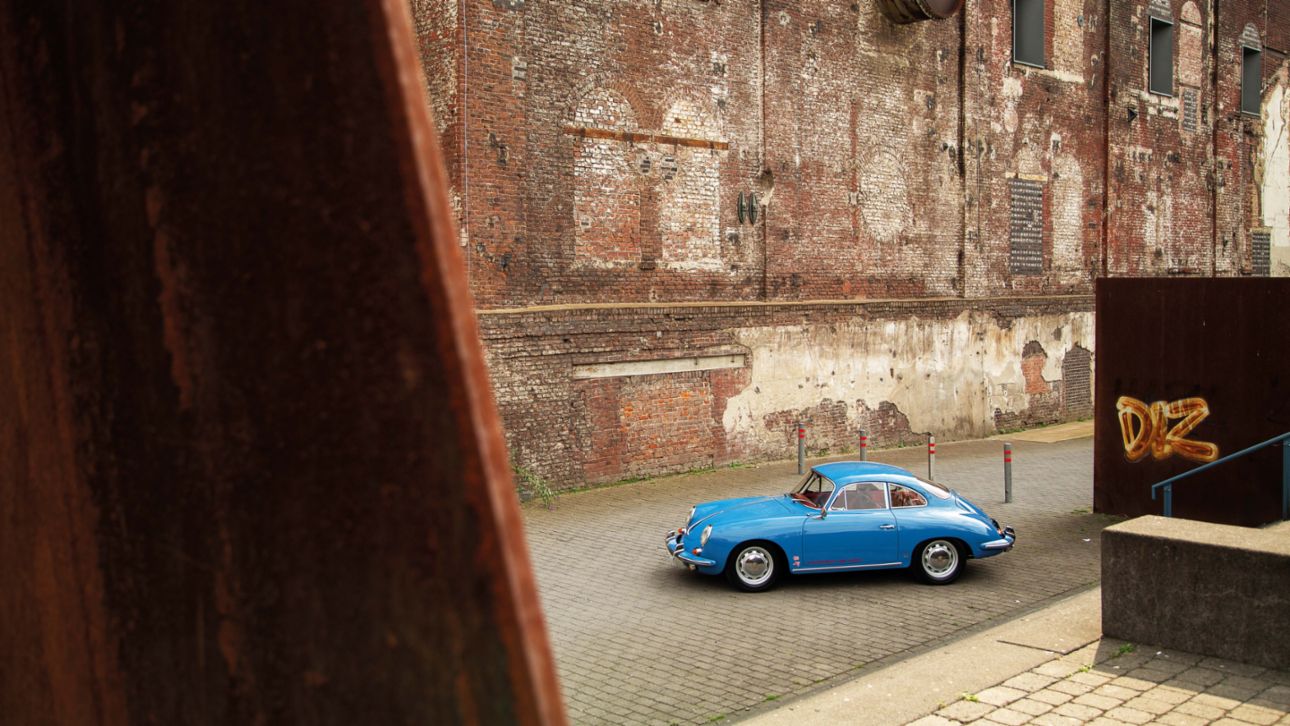 What car collector does not dream of making such a barn find? Such as a discovery in the decaying stables of a French castle where the legendary Baillon collection again saw the light of day in 2014. Or that made in a hay barn in the Allgäu region of Germany, where a very early Pretzel Beetle slumbered. In this case, it was only a warehouse in Essen. But what the treasure hunters found there in the summer of 2017 behind metre-high stacks of tyres was no less sensational – a 356 C that had been forgotten for almost 42 years.

But how did this Porsche built in 1964 get there in the first place? Claus Meirich knows the previous history. He is the man who purchased the discovered vehicle for 20,000 euros and restored it to its former glory over the course of two years with a team of external experts and friends from the Porsche scene. “The last owner, a tyre dealer from Essen, was an alcoholic and had to deregister the car he had purchased just one year before with a mileage of 79,000 kilometres shortly before Christmas in 1975. He put in the garage, where it was promptly forgotten.”

Meirich (67) describes himself as an “air-cooled boy from the Ruhr”. The qualified machine fitter used the second-chance education scheme to study engineering and then joined the mechanical engineering company MTE Deutschland. Two years ago, he sold his shares there and has since devoted a good deal of his time to his passion for classic cars. “So far, I have always had 911s with condition ratings 1 and 2. But the thought of breathing new life into a piece of automotive culture excited me straight away,” says the man from Bochum, who has been infected with the Porsche virus for over 30 years.

The 356 C has a rare colour combination of Enamel Blue 6403 for the body and a red interior, and was first registered by MAHAG in Munich on 11 June 1964. The first owner drove it 67,000 kilometres in eight years and sold the car in 1972 to an insurance broker from Krefeld, who then passed it on to the previous owner in Essen only two years later. This owner, now 74 years old, then remembered the car he had stored in a barn and gave the crucial tip-off to a Porsche 911 Club member. The latter did not hesitate for a second before driving there and also found a buyer straight away in Claus Meirich.

The two main cost items of the restoration, which ultimately came to 125,000 euros, were the body and engine. The car was taken away for a year just for the body and painting work. The complete underbody had rusted through as a delayed effect of the salt from Munich winters; only the centre tunnel was intact. There was also no alternative to a total overhaul of the 75 PS engine as it had been immobile for so long. The restoration started in the summer of 2017, without any deadlines. The 356 was stripped down to the last screw in a former cinema converted into a classic car hall, and then the various tasks were assigned. In the person of Ingo Menne, master mechanic and Porsche specialist, the owner found a congenial ally for all work on the running gear and brakes. Sadly he passed away in April 2019 so did not get a chance to see the fruits of his labour.

He received further support from a network of 356 experts in the Ruhr region; even the Bochum sheltered workshop helped out with a blasting booth and coating installations. The paintwork was produced in accordance with the works specifications of Porsche Classic by the body and paint shop Pür from Ahlen, which is also a specialist centre for Glasurit. For the sake of originality, a single-coat paint was applied without a clear-coat finish. According to Meirich, the metalwork was the most expensive item and also the task that needed most time. Roland Ahlers classic car service from Sendenhorst really did a thorough job here – the front end, battery box, door entries and sills, the complete underbody, the inner wing panels, diagonal members, axle mounts and outer door panels were renewed. Nothing was welded. Instead everything was tacked and then sealed just like in 1964.

In December 2018, the boxer engine overhauled by the Micke engine centre was ready, together with the transmission, running gear and brakes as well as the interior equipment. After replacement of the seat centre panels made of red brocade, the latter was as perfect again as in the petticoat era, but at the same time with a wonderful patina. Wherever possible, the team used spare parts from old stocks. They benefited here from the fact that there is an excellent supply of spare parts. Meirich: “There are two or three firms that can supply almost everything for the 356 within two days.” After the body had returned from the paint shop, assembly work started on 3 January 2019. The probably most celebratory moment then took place on 4 May: – the marriage of the body and engine.

After 24 months and 2,000 hours of work on the car, the blue wonder was perfectly restored by the summer. A flawless 356 C in a rare colour combination with all original documents and matching numbers confirmed by a Porsche delivery certificate. Porsche built the 356 C and SC models between mid-1963 and April 1965. The model was decelerated by disc brakes on all wheels for the first time and can be visually distinguished by the flat wheel caps without Porsche emblem. Meirich estimates that 300 still exist in Germany today. Those interested in buying one would have to invest between 80,000 (for models in need of restoration) and 150,000 euros (for models with a condition rating of 1) for this Porsche, which was built parallel to the new 911.

Attractive details in the interior of the blue car from Bochum are the original Blaupunkt Frankfurt radio and the head restraints lovingly known as “pillow rolls”. The instruments shine like they did originally, and the door openers and window cranks are parallel to each other at the correct angle of 45 degrees. On the exterior, the rare yellow Hella additional lamps catch the eye, as do the rear bumper horns through which the exhaust tailpieces are routed.

How fast does Claus Meirich drive the 356? “120 km/h is a good speed, with maximum revs of 4,500 rpm. Only the best 102-octane fuel is used, and the consumption is 10 l/100 km. And half a litre of oil is added at every third refuelling.” At the end, we notice how far inwards the Lemmerz wheels are located in the wheel arches. “There is a track enlargement available from the works,” says the Porsche expert. “But I am not going to get that, because I want the car to remain absolutely original.”

A success story started seven decades ago when the first new Porsche car was collected from the factory in Zuffenhausen.