The task of the Porsche patent attorneys is to protect the inventions of the company’s creative minds. Frank Zacharias, General Patent Counsel, has delved into the Porsche portfolio and selected a number of typical yet highly relevant examples from among the many different patents and design rights held by the sports car manufacturer.

The cutting-edge technology of the 959

“The 959 from 1986 was a technological masterpiece. It was so innovative that it is still very much a benchmark vehicle, even three decades later. These innovations were documented in the technical description for customers – so thoroughly that we have been able to use this brochure to defend our state-of-the-art designs against third-party patent claims. This document has continued to serve us well right up until recently, for its descriptions of the electronically controlled all-wheel drive or sequential turbocharging, for example. And that’s because people are still applying for patents for the technical solutions we developed over 30 years ago”.

Patented PCCB in the Carrera GT

“The Carrera GT also set new standards. One of the many outstanding developments in this vehicle was the Porsche Ceramic Composite Brake (PCCB). A patent registered by Porsche in 2003 relates to the internally ventilated ceramic brake disc with curved cooling ducts. Patents are valid for 20 years, so this design principle is still protected for Porsche today”.

“We also use design rights to protect the exterior appearance of our vehicles, including show cars such as the 918 Spyder concept car presented in Geneva in 2010. Both the shape and individual components are protected. Design rights are registered using photographs taken from different angles – and kept top secret, of course. Additional design rights and many different patents were then registered for the series-production vehicle”.

“From 2006 onwards, developers worked on the ‘panel bow’ convertible top for the 911 Cabriolet (991) with a view to recreating the flyline of the Coupé. We worked closely together with these developers to register many different patents for this and other roof systems, including those for the 911 Targa and the Boxster (981), earning a ‘best-in-class’ reputation for Porsche in the field of roof systems”.

“Back in 1990, the Tiptronic – an automatic transmission with the option for manual intervention – was a wholly novel development. Porsche was a trailblazer in this area, and there was a lot of buzz on the market about the Tiptronic. Many companies acquired licences for this design principle. The patent explains the Tiptronic’s technical characteristics – such as the second shift gate – in great detail. It is a fundamental principle that technical characteristics must be described with a high level of precision in order to distinguish the invention from other state-of-the-art technology and obtain exclusive patent-based rights”.

Early involvement in the Mission E

“We had already protected certain design elements of the Mission E and applied for patents for the first technical solutions before Porsche presented the Mission E concept car at the IAA in Frankfurt. The Porsche patent attorneys are currently working closely with the developers of the series-production vehicle. We’re also very much aware of the surrounding developments, for example in relation to the charging infrastructure, and we've registered a number of technical solutions in areas such as high-power charging”.

“Porsche has also patented a number of key production-related developments, such as the ‘picking stations’ developed to supply the assembly line with parts and components from the equipment departments. These stations are taken to the right location using a tugger train with up to four fully loaded transport units. Individual pallets can easily be swapped with empty ones on one side, while pickers on the other side pick out the required parts and place them on picking racks ready for the assembly line. Around 150 of these transport units are in use in the Zuffenhausen plant, and as many as 350 in Leipzig”. 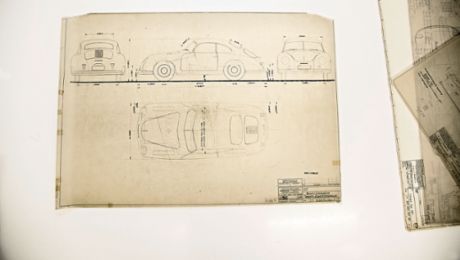 A collection amassed over time

In the Weissach Development Centre are thousands of design drawings housed in a basement room.

Designing for the Future in Weissach

Style Porsche is shaping how digital elements will be incorporated into sports cars in the years to come. 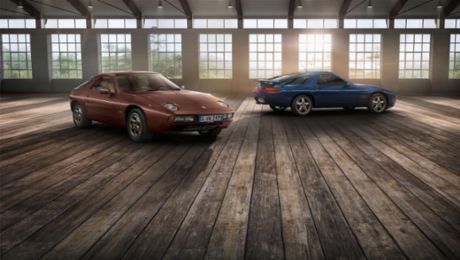 The 928 is the highlight of the Porsche stand at the trade fair in Essen.