Designing for the Future

Style Porsche is shaping how digital elements will be incorporated into sports cars in the years to come. Perhaps surprisingly, soldering irons and programming are as much a part of the mix as 3-D glasses and tablets. And mistakes are welcome. A visit to the future-oriented architects in Weissach.

The main difference between a Porsche and other brands will always be that, with us, the driver has a choice.” Chief Designer, Michael Mauer, pauses briefly to underscore the point he’s about to make: “Whether they want to enjoy a computer-assisted ride or drive themselves, there will always be a choice. That’s why Porsche will always have a steering wheel.”

The brand’s stylists, at their new design center in Weissach, are very clear about their priorities when it comes to defining the aesthetic and functional orientation of the interior. The Porsche of the digital age is unmistakably a sports car, and that means it’s a driver-focused affair. “And it’s fast,” adds Mauer. He’s not referring to the road, even though that’s true too. Mauer’s reference was a nod to the speed with which drivers can access the car’s functions. “The challenge is: How quickly do I find something? How quickly do I grasp it?”

Mission E gives some indication of how that will look. The idea is for the driver to be able to act very directly. What once required a lot of buttons will be a breeze in the future, with underlying digital assistance.

Mauer sketches out Porsche’s approach to this task as follows: “We first discuss things within the group. People suggest ideas. Quick sketches emerge. Then the topic is developed further in a project group, and after a short time—in many cases less than a month—we have a result. We work a lot with the trial-and-error method. Errors are welcome, because they make clear what doesn’t work.”

The 911 as point of reference

The primary objective is always a fascinating driving experience. The user experience is the focus of all the work that goes into the car. All research begins with a look back at the past. Using the example of a 1973 911 T, designer Thorsten Klein describes the elements that make the interior of a Porsche unmistakable to this day. He points to the round instruments with the tachometer in the center. “That obviously isn’t present in the all-electrically powered Mission E, but the principle of driver-oriented instruments is naturally the same.” Klein has been working in Weissach for more than ten years. Still in love, he caresses the cockpit mount, which traces a straight line—a line of reference for drivers, who are duty-bound to keep their eyes on the road. “The 911,” he says somewhat wistfully, as if to himself, “is our reference for every new development.”

“Our task,” says Mauer, “isn’t to linger reverently in the past but to further develop the company’s distinctive identity for the future. Retaining the essence and translating it into a design language that’ll be understood in the future.” And even those who first sit in a Porsche in 2030 should feel it: that Porsche feeling, the 911 genes.

Ivo van Hulten has been the head of interior design with Porsche for three years. His guiding principle in interior design is distraction-free operation. The Dutchman could put it in other words as well: less is more. This is no small task in the age of ubiquitous technology. “We pay very close attention to what people do in our cars,” says Van Hulten. Or what they don’t do. Some displays in the instrument cluster are practically never adjusted—and if they are, it’s only at the beginning when the curiosity for the equipment details is great and the desire to play with a new toy is still fresh. The fact that Van Hulten knows how to tidy up is demonstrated by the new Cayenne: more options, fewer buttons. Only order can create the space for new things—for example, for augmented reality. In real terms, what that means is “projecting virtual elements into the driver’s field of vision.” Van Hulten is certain that this technology will become relevant for Porsche, although it’s not perfect enough yet. After all, every moment in which the eyes are directed toward the road, and not toward a smartphone display, means greater safety and speed.

The scope of the interior design encompasses not only how displays are designed but also what’s seen on them. Gantimur Meissner’s business title is Director of UX/UI Design, which is not entirely self-explanatory. UX is an acronym from the world of web design that stands for “user experience”—in other words, what one experiences in and with a Porsche. “One typical user experience for Porsche drivers is improving their driving capabilities on a track. Hours later, the same driver in the same car might be searching for a parking spot downtown.” The nine-person team around Meissner develops solutions that enhance driving pleasure. The starting point is always the question: What does the everyday life of a Porsche driver look like? To ascertain the answer, members of the team spend several days with customers—or with noncustomers. They immerse themselves in other lives, photographing and describing them. “Then we deliberate on how regularly recurring situations can be resolved ideally for the customer,” says Meissner. “The focus at this point isn’t to design a particular form but to find a customer-friendly solution.”

If an idea—generally recorded in the form of simple sketches—is so good that it merits testing, an interactive prototype is created for the second acronym, UI—as in “user interface.” In the process, concept developers, designers, engineers, electronics experts, programmers, and modelers work hand in hand. They’re an integral part of Michael Mauer’s team in Weissach. Meissner has a lofty standard: “We want to be the place where technology and design flow together, melding into a perfect user experience.”

The world of design is an increasingly digital one, yet the beginning of every Porsche interior is still a sketch; totally analog, with pencil on paper. Not one but many sketches. “Quickly drawing ideas and then discussing them openly in the team is our culture,” says Van Hulten. Much is thrown out. What remains is quickly transferred into a digital model. Over multiple steps, a virtual interior emerges in which the intrepid developer, equipped with a pair of data glasses, can take a seat before even a single prototype has been built. “This allows us to experience many more variants in a real way.”

Once the broad strokes are clear, the style experts return to the analog world. Form and function alone don’t define the interior environment. Colors and materials are necessary to complete the overall appearance. But what does that mean? What materials will embody sportiness after 2020? Will they be classic high-tech materials such as aluminum and carbon or natural materials like wood and leather, whose surfaces are allowed to age over the course of time? Patina as an expression of modernity?

The line of tomorrow

Michael Mauer finds this tangible uncertainty stimulating when contemplating the future. Everything changes. “For creatives, this acceleration in the pace of change is an inspiring state to be in.” The design team is trained in the art of anticipating what’s to come and imagining the world of tomorrow. Mauer, too, was thinking ahead when he assembled his team years ago. “We have more generalists on board, to think further ahead,” he says, while his right hand—as it so often does—draws a 911. The line of tomorrow? “Perhaps,” answers Mauer, who then laughs and folds up the piece of paper. Even in 2048, when the Porsche automobile brand will turn one hundred, the beginning of every project will most likely be a hand sketching “and seeing if it feels right.”

Mauer generally explains his preference for a particular variant with the following sentence: “That’s the one that gives me the best gut feeling.” A feeling that can only be sensed intangibly in the virtual world, notwithstanding the ever-more-realistic representations it enables—and the reason why perfectly handcrafted modeling will continue to be valued, even as the digital future unfolds. 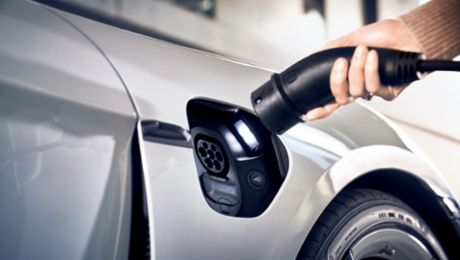 Porsche is forging ahead with its drive to develop and manufacture high-performance battery cells. 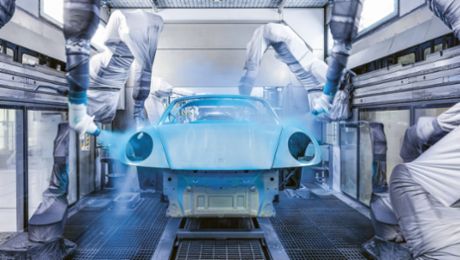 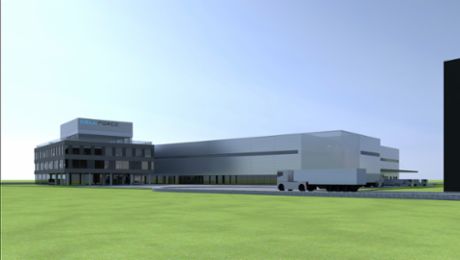 Cellforce Group GmbH (CFG) is to build its development and production facility for high-performance battery cells. 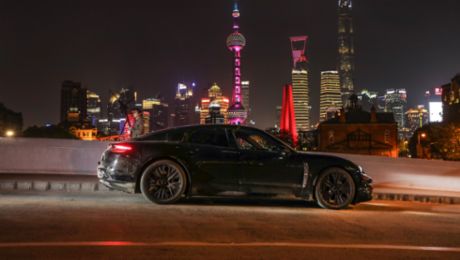 Porsche meets needs in Asia and is expanding its global engineering and assembly capacity.