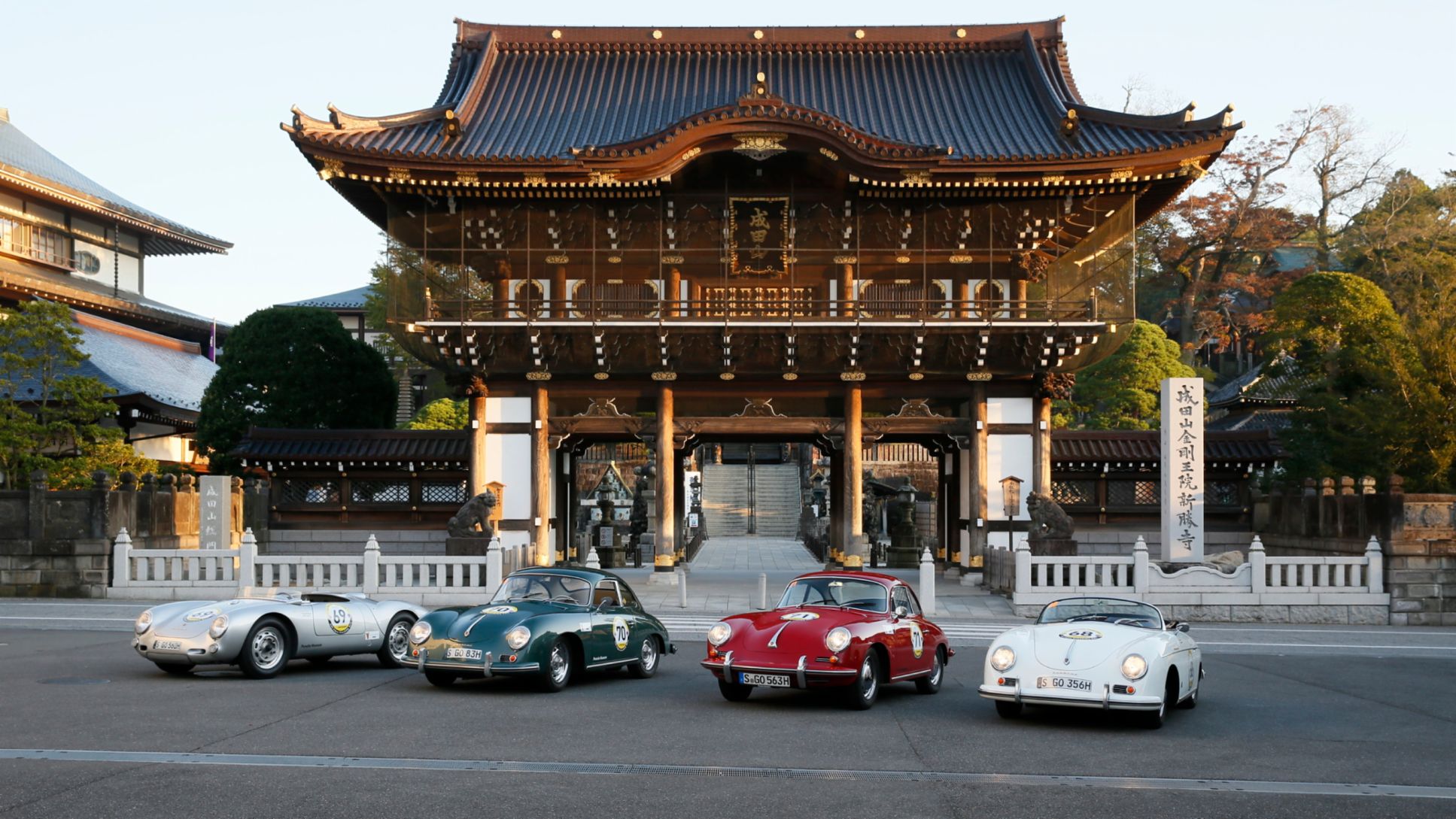 Japanese Porsche enthusiast Kazumi Araki is absolutely thrilled; he’s just discovered that his Porsche 550 Spyder, production number 65, is sitting beside the Porsche Museum’s model, which has been restored over a period of two years: number 64. That really is a coincidence, as Porsche only made 130 of these automotive gems, which are worth millions. The two vehicles are among the 120 top-class vintage cars that have graced the 26th Japanese Mille Miglia rally, an exotic take on the famous Italian classic car rally covering almost 1,400 kilometres and known here in Japan as “La Festa Mille Miglia”.

What could be more fitting for the Porsche Museum than to end this year’s driving season with a special event in faraway Asia? “As the ‘70 years of Porsche sports cars’ jubilee year draws to a close, we wanted to do something completely new for ourselves and appear in a totally different market”, says Achim Stejskal, manager of the Porsche Museum. “And Japan is a traditional Porsche market, where there’s a real car culture.”

Toshiyuki Shimegi, Managing Director of Porsche Japan, together with his co-driver, journalist Yoshio Fujiwara, will have the honour of driving the priceless 550 RS Spyder through the metropolis of Tokyo, home to 25 million people, and on through central Japan. The street-legal racing car will be flanked by a white 1955 Porsche 356 Speedster, driven by famous Japanese chocolatier Sadaharu Aoki along with journalist Kazuhiro Nanyo. There’ll also be a 1962 356 B 1600 Super 90 at the starting line, driven by a team consisting of Achim Stejskal and editor Michael Schröder, and a 1956 Porsche 356 A 1600, manned by Alexander Klein, Head of Vehicle Management at the Porsche Museum, and editor Roland Löwisch. “Just like in Japan, equal importance is given to maintaining a living tradition and focusing on the future at the Porsche Museum,” says Klein, who is also responsible for historical driving events and the company collection. “And we’re delighted to see how well the Japanese spectators and fans are responding to our classic Porsches, and to receive such a warm welcome. As the only Germans here, we’re something of a minority!”

The Japanese public on the roadside and at the special stages and stamping stations has been very enthusiastic about the exquisite fleet of vintage cars – and especially the four cars with the German license plates. Klein: “The enthusiasm people are showing for our cars means that the effort we put into this exotic undertaking has really paid off. As part of this historical public relations undertaking, it is wonderful for us to literally experience for ourselves how living tradition is practised. Japan and Porsche have more in common that you might think at first glance. The fact that our future and our origins are inextricably anchored in culture is a strong parallel.”

The first stage will showcase the modern, vibrant city of Tokyo, home to millions – after the traditional blessing of the cars and participants at the starting line the Meiji Shrine. The original route used in the first Japanese editions of the race is being travelled for the first time since the Fukishima disaster, initially leading over many kilometres of motorway and then on to the thatched village of Ouchijuku before bringing racers to the Urubandai Lake resort, located 370 kilometres away. From here, participants drive a 340-kilometre loop, which includes special stages on the Link racetrack, and a visit to the Fukushima Sky Park, which is blanketed in fog this time, and Shiroishijo and Tsurugajo Castles. The third day sees participants drive an intensive 444 kilometres into the British Hills, to Komine Castle, on to Hunter Mountain, and to Narita via the Hero-Sinoi circuit. The final day of driving seems very short at 236 kilometres, but the impressive Shinshoji Temple complex in Narita, the many special stages along the Sodegaura Forest circuit, a visit to the quirky Tokyo German Village and the drive back through the constantly congested Tokyo take up a lot of time.

The race is a real challenge for human and machine – especially for the German teams: in Japan people drive on the left, drivers don’t even use their horns in the capital, traffic lights take an extremely long time to change, you have to stop completely at level crossings, and the speed limit is just 40 or 50 km/h on many country roads. “The regulations in place in Japan tend to slow down the rather sporty driving style you would see at the rally in Italy. Here, it’s more of a journey than a race,” comments Stejskal, referring to the strict traffic regulations. Nonetheless, the four classic cars from the Porsche Museum show what they’re made of – for example, on steep, winding roads or on racetracks. Here, the care and preparation the Porsche mechanics have poured into the cars really pay off. The workshop crew travelled light: just three toolboxes and one spare wheel were deemed sufficient.

And the result? 44 of the participants fail to reach the finish line – but the four cars from the Museum give no trouble at all. All four vehicles survive the 5,600-kilometre drive without so much as a scratch, let alone a breakdown, the teams bursting with new impressions from the temples, skyscrapers, amphibious buses and the many cosmopolitan, friendly people they have encountered along the way. These new sights make it easy to get over the fact that some areas look just like the Eifel or Allgäu circuits. The baboons in and around the hot springs of Miyagi, almost square Kei cars, and outstanding Japanese cuisine are bound to open the eyes of any doubters to the exotic beauty of this unique country.

By the way, although – just like the other teams in the German cars – Spyder driver Kazumi Araki did not win the Japanese Mille Miglia, he did receive the Porsche Museum Special Award for his commitment. The prize, a Porsche Design champagne cooler in the form of an air-cooled Porsche cylinder, was presented by Alexander Klein at the gala evening, which was attended by the event’s patron, Princess Akikko of Mikasa, Japan. 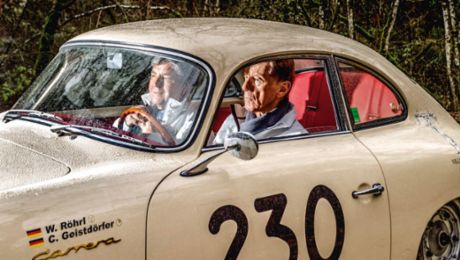 Of Defiance and Diplomacy – Röhrl and Geistdörfer

Walter Röhrl and Christian Geistdörfer have competed in nearly every major car rally. 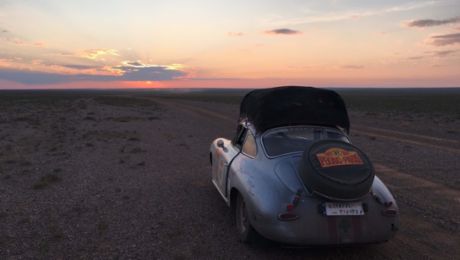