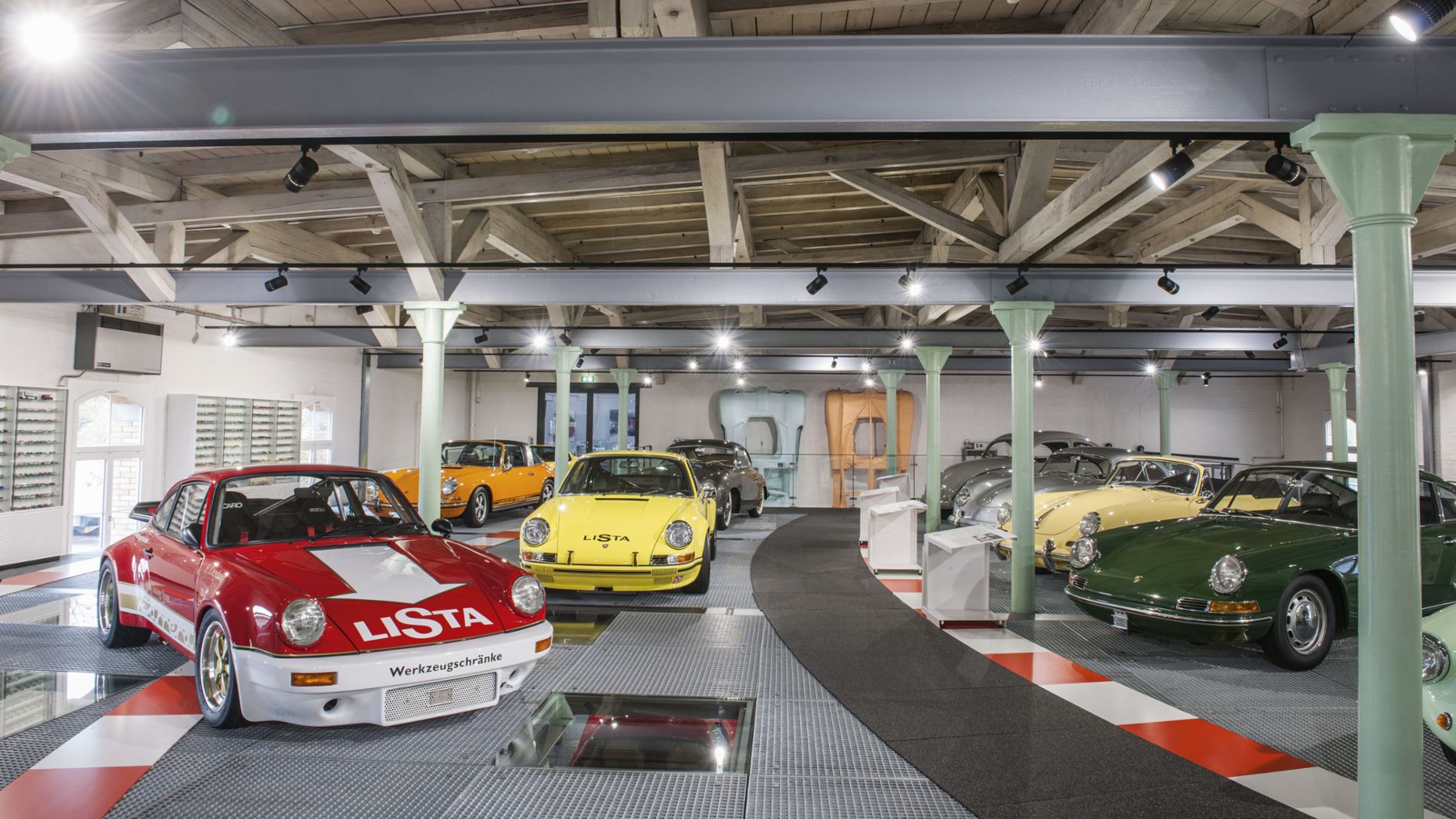 “I might be a little bit car-crazy...” Coming from Fredy Lienhard, this is quite possibly the understatement of the year. Countless Porsche cars are on display in his autobau museum.

The former racing driver has amassed an amazing collection of vehicles which he – unlike many others – chooses to share with others, rather than keep hidden from the public. His collection is displayed in a fascinating museum known as autobau, a place that is still relatively unknown in Germany.

The red-brick buildings almost look out of place; it’s as if the historic 19th century building ensemble is part of a model railway, an idyllic replica of industrial-age romanticism. It is in pristine condition, spotlessly clean and far too ‘perfect‘ for the present day. But this isn’t a 1:87-scale miniature wonderland; it’s an automotive paradise tucked away on the eastern edge of Switzerland. It’s a gem that virtually no-one has heard of – no-one north of Lake Constance, that is. Industrial entrepreneur and former racing driver Fredy A. Lienhard chose the name ‘autobau’ for the fascinating museum housing his diverse collection. For visitors from Germany in particular, this museum is an unexpected hidden treasure.

One of Switzerland’s most successful figures in motorsport

Now 69, the much younger-looking Lienhard was one of Switzerland’s most successful figures in motorsport for a number of decades. Even as a small child, he knew that his place was behind the wheel, inspired by his father Alfred, who was also a keen racer: initially on the motorbike, then in a Porsche, and later even in a bobsleigh. At just ten years old, Fredy participated in his first soapbox race. He then progressed to a car with an engine, before getting behind the wheel of his first go-kart and taking his passion for motorsport to the next level.

“We started off really small”, says Lienhard, recalling the many evenings and weekends spent with his friends in the small workshop in the basement of his father’s metalworking business, tinkering with Formula Vee cars based primarily on Beetle parts. “Everyone did their bit. I was good at finding scrapped parts, cleaning them up and painting them. I also took care of the accounting when I was a student”. He smiles: “Racing cars are like women – you can’t share them. We knew that even back then, so each of us in our group of four had our own car, in our own colour. Mine was blue”.

Racing had to be put on hold – but not for long

Were there signs that he was heading for a professional career back then? Lienhard can’t answer this question, because in 1970, at the age of just 22, a cruel twist of fate left him facing a difficult decision: The sudden death of his father meant that he had to manage the family company and its 400 employees. Racing had to be put on hold – but not for long. Looking back, Lienhard has no regrets: “It’s a good thing that I went into business – it’s allowed me to stay involved in this sport, which doesn’t come cheap, for longer”.

In 1971, Fredy got back behind the wheel to compete in a few Formula Super Vee races. “Driving was important to me”, he explains today – even though the comeback almost ended in catastrophe with his car flying off the track at the Hemberg race. “I wasn’t familiar enough with the track, and I mistook a hairpin bend for a third-gear corner”, recalls Lienhard. He knocked down three trees and rolled the Monoposto over. “On the soft grass, the roll-over bar sunk down, resulting in three vertebral fractures. If that happened again today, I wouldn’t survive it.” Luckily for Lienhard, his safety helmet got jammed in the roll-over system and helped to hold him in place. “That accident was the most serious of my entire career. Luckily, all of the injuries healed without surgery. Two weeks later, I was back behind the wheel at Hockenheim. I needed to prove to myself that I could still race…”

Fredy could still race, but he had reached another important decision too: He would now make a move away from open top race cars. In 1972, he began racing a Porsche 911 S/R; he already privately owned an orange 911 S Targa: “I knew I wanted a racing car with a roof.” Two years later, he replaced the S/R with an RSR: “It was a great car, ready to drive straight out of the factory. That was really important to me at the time; I was a business man, not an engineer. I won virtually all of the races in the Swiss championship in that car, and even beat international competition in Hockenheim. The high resale value was also an important advantage”.

The car collector now regrets his decision to sell. He later stumbled upon the yellow 911 S/R purely by coincidence – and it has now been lovingly restored as an exhibit at autobau. Unable to trace the red RSR, Lienhard had a faithful replica built.

Biggest motorsport success: 2002 he won the 24 Hours of Daytona

In 1975, Lienhard made a return to the open top racing cars of his past. Until 1984, he participated in Formula 2, and then in the follow-up series Formula 3000, before switching to Le Mans prototypes. He increasingly found himself on the starting grid across the pond in the USA, and in 2002 he won the 24 Hours of Daytona, his “biggest motorsport success for sure”. Six years later, and Lienhard had gone full circle with the purchase of a Porsche RS Spyder. Like so many other professionals to have driven the 478 hp, LMP2 two-seater, he is convinced that “it was the perfect racing car”. Lienhard, then 61, qualified for the European Le Mans series in the car, and also won the Michelin Energy Challenge “because the Porsche was so amazingly efficient. The performance would have qualified me for the 24 Hours of Le Mans. But when my daughter announced that I was going to be a grandfather, I didn’t want to any more”. With a hint of regret, he adds: “Unfortunately, I have nothing to prove at Le Mans or on the Nordschleife at the Nürburgring”.

For Lienhard, racing was never an end in itself; the entrepreneur saw it as an opportunity to promote his business, which manufactures premium-quality tool cabinets and workshop equipment. “The automotive industry has always been a key customer for us”, explains the manager, who remains committed to a diverse range of interests. When he took over the company as a young man, it was making 36 million Swiss francs a year. Ten years later, turnover had increased to 100 million, eventually exceeding the 400 million mark and boasting a workforce of just under 2,000 employees. “We promoted Lista and supplied the teams, and this enabled us to establish contacts in the car manufacturing industry. This approach is how we became the market leader in the USA. Even when heavily loaded, our cabinets last 50 years or more”.

Lienhard kept many of his original racing cars, and rediscovered and bought back some long after he had sold them on to new owners. His collection features over 100 series cars, prototypes and other valuable rarities, including – of course – many Porsches: from the 75 hp 356/C from 1964 and his 911 racer to an RS Spyder and an impressive Porsche 962 dating back to the Group C era. A 918 Spyder, Zuffenhausen’s hybrid super sports car, brings the collection up to date. The collection also includes American big blocks, flame-red Italian cars, genuine Formula 1 racers, hand-made one-off pieces and exclusive small series models, including a Vector W8 – for anyone who remembers the 390 km/h Lamborghini challenger…

As is the case with many collectors, despite being generally roadworthy, all of these fascinating vehicles were previously kept under lock and key, inaccessible to the general public. This all changed in 2003, when a primary school teacher approached Lienhard. “She asked me whether her year four pupils would be allowed a look at the car”. The collector was happy to oblige. “When I saw the joy in the children’s eyes and their boundless enthusiasm, something inside me clicked and a seed was planted”.

Lienhard turned his vision into reality

In a building at Egnacherweg 7 in Romanshorn by Lake Constance, Fredy (“I might be a little bit car-crazy…”) Lienhard turned his vision into reality. The collection is now displayed in a former alcohol warehouse, which was built in 1892, closed in 1996, and discovered by Lienhard in 2007. In April 2009, he reopened the building under the autobau name. Today, the magnificent buildings are more resplendent than ever: The offices are located by the entrance, while the long, brightly lit halls directly behind house the collection, carefully arranged over two floors, as well as a café and events spaces. The museum even has its own track – which only runs clockwise, unless the driver changes direction, but it’s still pretty impressive. The “Polygon” is a brand-new addition to the museum. The 12-sided brick construction surrounds a solid riveted steel tank which once held 2.8 million litres of industrial alcohol. Soon, a new part of the collection will be on display here. “Our museum is a bit like a racing car: It’s never finished”, says Lienhard with a smile. “We are continually developing autobau, and we’ve already got plans in place for what’s next”.

“For me, a passion for cars is what it's all about”, says the collector, who is happy to allow museum visitors to sit in his cars. “I really am very fortunate. autobau allows me to share my passion with others”.