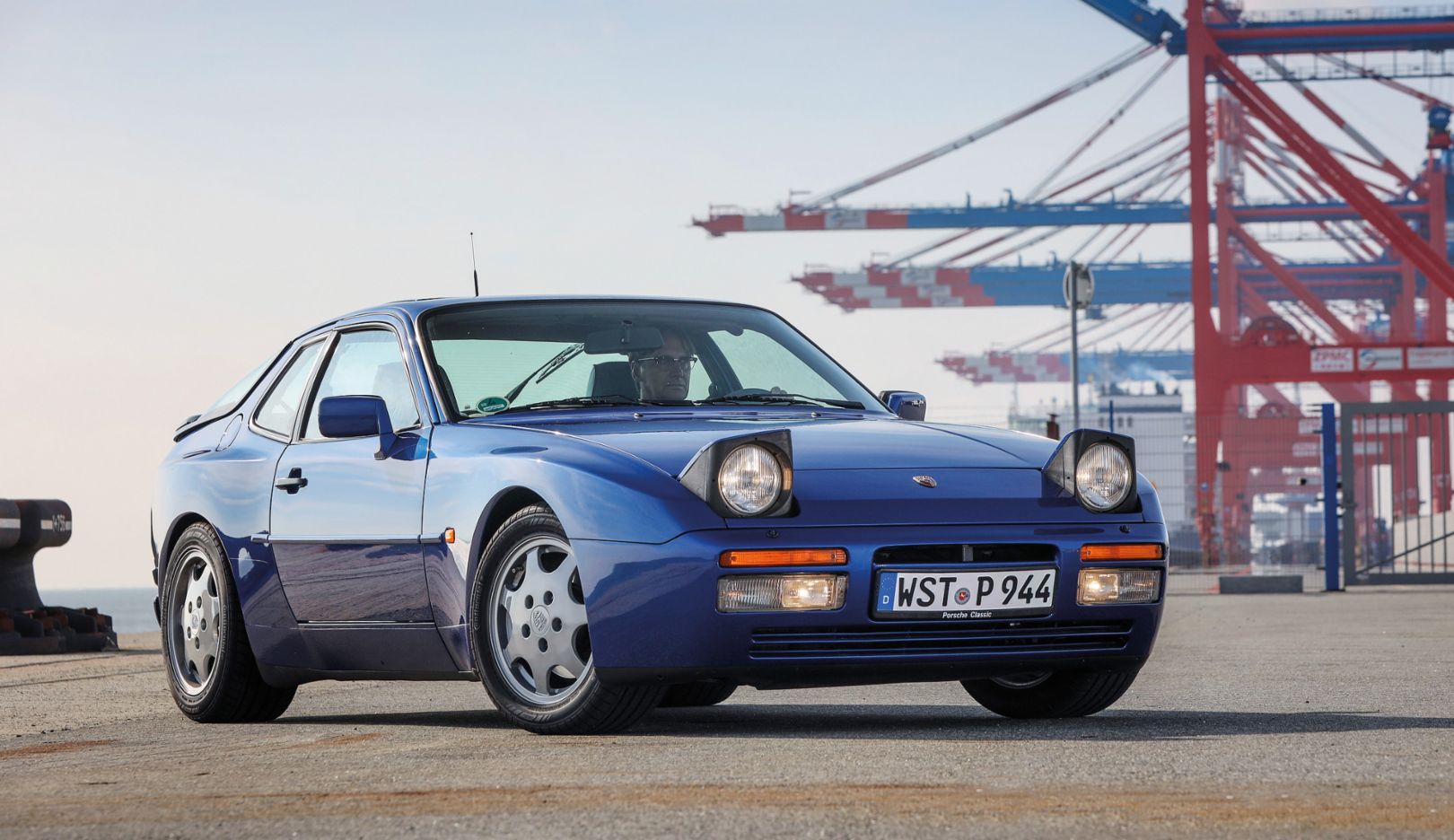 It is a Porsche that is just really taking off as a classic model and is still affordable – the 944. But prices are moving upwards here as well, because something has changed in people’s perception. All transaxle models – the cool sports cars with a glass dome from the series 924, 944, 968 and 928 featuring amazingly long bonnets and pop-up headlights – capture the spirit of time more than ever today. They are stylish, likeable, almost even exotic. It is a fact that a good 944 is more conspicuous on the road in 2020 than one of the many 911 cars.

The Porsche 944 S2 is a sports car with a top speed of 240 km/h. It features ideal weight distribution thanks to the transaxle architecture – engine at the front, transmission at the rear. This results in optimum handling.

Among the various 944 models, the 944 S2 is a kind of inside tip and is worth a try for a number of reasons. Firstly, it is quite rare; between 1988 and 1991, fewer than 9,400 Coupés and 7,000 Cabriolets were built – spread over all continents. The late models with front airbags are particularly rare. Secondly, the 944 S2 is an absolute technical highlight because its 211 PS 3.0-litre engine made history as the four-cylinder engine for passenger cars with the largest displacement. 280 newton metres of torque are available here at 4,100 rpm. The 3.0-litre four-valve naturally aspirated engine also offers better driveaway performance than the 2.5-litre twin-valve turbo engine, because the turbocharged engine needs a certain engine speed to overcome the turbo lag.

Thirdly, the pricing structure is interesting, because very good vehicles with condition ratings of 2 and better can be obtained from between less than 30,000 up to around 45,000 euros. Anyone who chooses a model that has not been restored can purchase a car for even less, in order to then work upwards euro by euro through partial restoration. And that is exactly what PORSCHE KLASSIK did with the Porsche 944 S2 from 1991 shown here. Purchase price: 18,500 euros.

We intentionally looked for a 944 S2 from 1991, the last year of manufacture. It had to have airbags, because safety is also important in classic cars, and there are also almost never any cracks in the plastic with airbag fittings. The 944 S2 shares the airbag steering wheel (standard from February 1991) with the 964, 928 S4 (optional), 928 GTS and 968 (CS also optional). It may not concern purists, but the heavier airbag steering wheel gives the 944 S2 a different and more solid steering feeling than the thin four-spoke steering wheels that originated from the 924 and 911 G model era. An air conditioning system and the Targa roof were also essential.

Anyone who has ever driven a transaxle four-cylinder Porsche without air conditioning knows that they turn into a greenhouse in summer. The raised Targa roof alone provides only limited relief. But it is a great feature, because it can be removed and therefore allows light and fresh air on board when cruising on country roads until well into autumn. Other compulsory features were a continuous history, not too many previous owners and guaranteed to be accident-free. A more secondary aspect for the 944 S2 is the mileage. That is because the engines are generally long-lived; unlike the 911 models of the time, many 944 were used for driving long distances as business sports cars. We finally chose a vehicle in the colour “Cobalt Blue Metallic” that was registered to Dr. Ing. h.c. F. Porsche AG in Stuttgart in January 1991. This was the colour that was also successfully used for the advertising and press pictures of the 944 S2 at the time.

The 944 S2 remained a works car for three years with the registration “S – KV 6230”. After this, it was driven around the Ruhr region by its next owners, and was re-registered once more within the owner family. The third station before being sold to us was ten years with the last owner in East Frisia. Here the sports car settled down to a slower pace of life and was driven only around 10,000 kilometres during the entire decade. What also attracted us and made us decide to buy this car was the fact that this 944 S2 did not have any leather in the interior, but instead featured the “multicolour fabric” of the now rare all-fabric seats.

Other special features were the original height-adjustable suspension (M 030, like on the 944 Turbo) and an also original sound system – the Blaupunkt radio “Symphony” together with additional amplifier with integrated Blaupunkt equaliser plus sound package, as well as the fully functional Bosch car telephone connected to this. The latter was located in the luggage compartment with the operating unit in the cockpit. Here is a useful tip – take slightly longer when searching for a car to find a vehicle like this with special equipment. Various recent invoices showed us that the previous owner had kept the technical systems in reasonable shape (including replacement of the toothed belt).

The only thing that was faulty was the air conditioning system, which no longer had any refrigerant in the system after almost three decades. Having said that, this 944 2S provided a reasonable, ideal and exciting basis for slowly transforming it from a used car into a practically new classic car. The first thing that the Porsche received as a matter of routine was new Continental tyres (650 euros including fitting), an oil change and the official 33-point check in the Porsche Centre Oldenburg, in order to obtain the Porsche Classic Card. The checks showed that the vehicle was in peak technical condition – apart from the air conditioning system mentioned above.

The visual defects of the 944 S2 were very apparent. Decades of journeys on German motorways had taken their toll on the paintwork at countless locations on the exterior. The “Design 90” cast wheels fitted since the initial delivery had not been repainted well. In the interior, the fabric on the driver and front passenger seats was worn through, and the leather on the steering wheel and gear knob was no longer attractive. The tonneau cover over the luggage compartment was crumbling due to exposure to UV radiation. But is exactly here where the pleasure of restoration and replacing old parts started – Lego for big boys, so to speak. For if the technical basis is in good condition, every cent invested in such a 944 S2 is worthwhile.

The first Porsche new part as a leather gear knob (243.42 euros). Work then continued in parallel both inside and outside. We found fabric for the seats at werk924.com (587.90 euros for all seats). The long-established Mönnich saddlery in Oldenburg replaced the foam in the front seats and covered them with the new “multicolour fabric” (“Classic Grey”). Because the steering wheel is no longer available as a new part, it was covered with new leather (total saddlery costs: 3,100 euros.)

At the same time, the car was prepared for painting. This includes removing all small dents so that filling is not necessary, as well as complete disassembly of all add-on parts, door and lids, including the tank flap. This was done by the careful body technicians at the Hansa car dealership in Rastede in North Germany. This painstaking work was performed over days at special “mates’ rates” of 1,335 euros. This was following by painting with full photographic documentation. This allows it to be proven that the new paint coating was applied for purely visual reasons and that the work was performed perfectly. The original “Cobalt Blue Metallic” paint was applied by the Jens Karsch paint shop in Rastede, which is also the author’s home town (2,618 euros). Cooperation with local specialists is possible everywhere and is an important basis for ensuring that both costs and quality are right.

An example of this is the disassembly work before and after painting – almost every car driver has a workshop nearby that they trust. All you have to do is ask what is possible for a flat-rate price. Often, the shared passion for classic cars is enough to keep the costs reasonable. As part of the assembly work after painting, all rubber seals on the body of this 944 S2 were replaced. A regional specialist, the Ammerländer Polier Service (APS), stripped the paint off the original wheels and restored them to new condition by powder coating. Repair of the air conditioning system together with a new compressor and CFC-free refrigerant cost 1,500 euros. In the end, 33,000 euros were invested in the 944 S2 including purchase price and replacement of wear parts such as the rear silencer. But the “Youngtimer” with a condition rating of 2+ is worth that. It will become an “Oldtimer” in 2021 and will therefore receive an H registration as a badge of honour.

Text first published in the Porsche Klassik magazine, No. 16.