The whole seven-woman Porsche Team Germany will be appearing in Stuttgart.

The 37th Porsche Tennis Grand Prix was officially opened when the players were presented on the Centre Court under the motto “Play!Girls”. Superstar Maria Sharapova, who has come to Stuttgart as the title-holder, was given an especially warm welcome by the spectators in the Porsche Arena as was the Porsche Team Germany which had only just arrived back from their Fed Cup win in Australia. “We’re all still so totally over the moon, and we’re very tired after the long flight,” said Angelique Kerber. “Now we’re looking forward to having a great week at our favourite tournament. With the support of the fans, we will be doing our very best in all our matches and we’ll just go out and enjoy every day.”

The whole seven-woman Porsche Team Germany will be appearing in Stuttgart. Joining the winning quartet in Australia, namely Angelique Kerber, Andrea Petkovic, Julia Görges and Anna-Lena Grönefeld, will be Sabine Lisicki plus Annika Beck and Mona Barthel who booked their tickets for the long-standing Stuttgart tournament via qualifying on Monday. Annika Beck had little trouble in her last qualifying match when winning 6-0, 6-1 against the Czech Katerina Siniakova. The 20-year old world No. 49 only needed 42 minutes to progress to the main draw where she will face the strong Italian Roberta Vinci on Tuesday.

Mona Barthel however was fortunate to advance. Though the 23-year old lost against Croatian Ajla Tomljanovic 6-4, 5-7, 7-6 (1) she was given a main draw berth as a lucky loser when the Slovakian Dominika Cibulkova was forced to withdraw after suffering an achilles tendon injury in the final of the WTA tournament in Kuala Lumpur. She will meet the No. 5 seed Jelena Jankovic (Serbia), the former World No. 1 and 2008 Stuttgart winner. Another player to profit from the lucky loser rule was the Briton Johanna Konta who replaced Caroline Wozniacki in the main draw. The Dane, who had practiced in the Porsche Arena on Saturday, had to pull out due to a wrist injury. Johanna Konta had little time to recover as she had to go out on court again later on Monday evening for the first main draw match of the tournament but lost 7-6 (4) 6-4 in one hour 34 minutes to Estonia’s Kaia Kanepi.

A piece of tennis history came alive on the Centre Court in the Porsche Arena on Easter Monday. In the Berenberg Classics “Duel of the Legends”, 14-time Grand Slam champion Pete Sampras (USA) and Spain’s current Davis Cup captain Carlos Moyá showed that they can still play attractive and exciting tennis even though they retired a while ago. The enthralling encounter with spectacular rallies was won by the clay court specialist Moyá 7-5, 6-4. 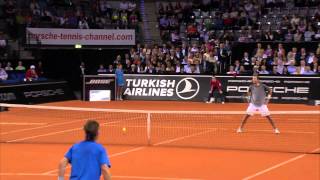 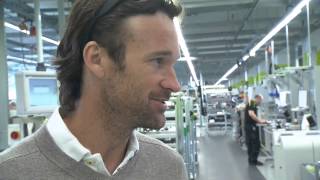