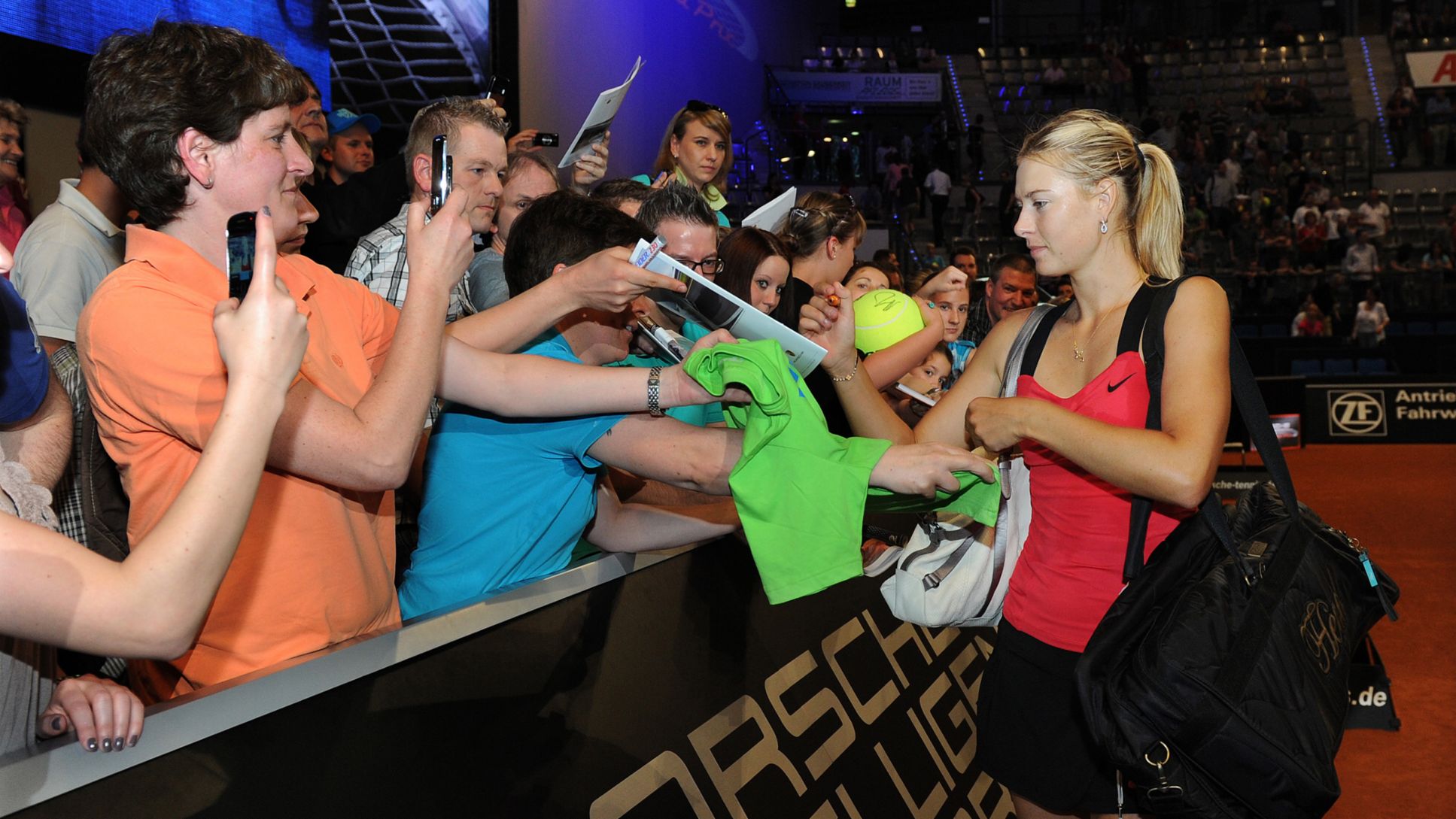 Porsche and international women’s tennis have had a close partnership since 1978. Both world-class players and spectators will be able to enjoy the results of this support at the 38th annual Porsche Tennis Grand Prix.

Ana Ivanovic stood alone on center court at the Porsche Arena, at first bitterly disappointed, and then at a loss for words. Ivanovic had just lost the final match of her dreams at the 2014 Porsche Tennis Grand Prix against Maria Sharapova (6–3, 4–6, 1–6). Until the middle of the second set, this native of Serbia had dominated her Russian opponent with elegant and varied play, but ultimately succumbed to Sharapova. However, the spectators were honoring Ivanovic as if she were the victor, with applause that seemed to go on endlessly. “I don’t know what to say,” she stammered into the microphone. “This is so nice of you.”

Highlights such as these are seemingly an everyday occurrence when Porsche holds its annual major tennis tournament. Fans in Stuttgart are already looking forward to April 18–26, the 38th gathering of the world’s elite female players, once again to include many of the top ten. The best of the best will be battling for a trophy that embodies in impressive form many of the unique features of this tournament: the winner always drives away from center court in a brand-new Porsche.

In 2014, Maria Sharapova took first place and the wheel of a 911 Targa 4S. A well-deserved reward. Athletic feats, entertainment, and organization come together to form a fruitful alliance at the Porsche Tennis Grand Prix, which Stacey Allaster, chairman and CEO of the Women’s Tennis Association (WTA), describes as follows: “The Porsche tournament is one of the most innovative events worldwide, and is considered a model for all top WTA tournaments. The players enjoy a world-class event, whose quality also ends up inspiring their game.”

A new level of dynamism in women's tennis

Tennis and Porsche have matured into a perfect doubles team. Porsche has been a sponsor of the WTA since 1978, and since 2002 has even assumed the role of event organizer and tournament owner—unusual for the industry. The WTA values the company’s commitment, and honored its partner in 2004 with the “Long Time Contribution Award” for a partnership that has had a major effect on the sport. Since 2012, Porsche has also been maintaining a close relationship with the German Tennis Association (DTB) as a premium partner, and has been sponsoring Porsche Team Germany with top-ten stars such as Angelique Kerber and Andrea Petkovic.

“We wanted our support to inject a new level of dynamism into women’s tennis in Germany,” says Bernhard Maier, the Porsche AG board member in charge of sales and marketing. “And that is what has happened.” At the 2014 Fed Cup team world championship, Porsche Team Germany made it to the final, but was beaten by the Czech Republic, which entered the tournament as the serious favorite.

Last year Porsche Team Germany members won five WTA tournaments: Andrea Petkovic (Charleston and Bad Gastein), Mona Barthel (Båstad), Sabine Lisicki (Hong Kong), and Annika Beck (Luxembourg). In order for this trajectory to continue, the company is also sponsoring the best up-and-coming young players by way of its Porsche Talent Team Germany, with a similar degree of success. Anna-Lena Friedsam won her first WTA title in Suzhou in China, and both she and teammate Carina Witthöft made it into the Top 100 group of world-ranked players.

This commitment to development also benefits the Porsche Tennis Grand Prix, of course. Three or four German players regularly stand on center court and play eye-to-eye with the best players in the world. This aspect is a big attraction for the spectators—and the players as well. “The tournament in Stuttgart is like a home game,” says Andrea Petkovic. “The support, the spectators, the environment—we really enjoy all of it.”

“Everything has to be Porsche, which means of the highest quality”

Porsche’s commitment represents an appealing way to bridge tradition and modernity. The Porsche Tennis Grand Prix is the oldest indoor tournament on the WTA tour, and it is also currently the only indoor tournament on clay. The WTA players voted it their favorite tournament on the tour in 2007, 2008, 2010, 2011, 2012, and 2014. Superstar Maria Sharapova, who serves as an ambassador for the Porsche brand, has won the Grand Prix the last three years in a row. The list of winners features legendary names in women’s tennis, including Tracy Austin, Martina Navratilova, Gabriela Sabatini, Mary Pierce, and Martina Hingis.

“Everything has to be Porsche, which means of the highest quality,” says tournament director Markus Günthardt. A former Swiss tennis pro, he has guided the course of the tournament for the past ten years, with the help of athletic director Anke Huber, a two-time winner of the Porsche Tennis Grand Prix herself. Günthardt never tires of examining and enhancing aspects of the tournament. The company’s home grounds have proven to be an unparalleled place to play.

The modern Porsche Arena offers superb technical facilities that enable the tournament to become a major event. An enormous screen, videos, and light shows make the presentation of the players into an experience also valued by the athletes themselves. Monitors are set up everywhere to enable visitors to follow the action at all times. Between matches they can also visit the “Sport & Lifestyle Village” to shop or have a coffee. While doing so they can enjoy watching the stars during training sessions.

Porsche exhibits a great fondness for sports in many areas, but nowhere is the company’s philosophy as evident as at the Porsche Arena, where the best of the best battle across the net for a Porsche sports car. Ana Ivanovic, the smart Serbian, lost her battle last year. But on center court, amid thunderous applause from the spectators, her disappointment quickly turned into courage. “I’m already looking forward to returning next year,” she said. And for our part: a very warm welcome to you!

“Sports are part of our DNA,” says Bernhard Maier, the Porsche AG board member in charge of sales and marketing. So it’s no
wonder that in addition to racing, Porsche also supports and promotes sports like tennis.

Porsche donates over €25,000 a year each to the sports associations of the states of Baden-Württemberg and Saxony, where its Stuttgart and Leipzig sites are located, in order to support top young athletes on their way to the Olympic Games or other world championships. Porsche also donates up to €500,000 a year to exemplary projects by sports associations that tend not to be in the limelight.

“Turbo for talent” is the name of a new project to promote young athletes, which Porsche has launched together with second-division soccer club RB Leipzig. A similar partnership with the Stuttgart Kickers will be introduced in the 2015/16 season.

The Porsche Basketball Academy in Ludwigsburg, which brings together eleven partner associations and 55 partner schools, enables around 2,500 children to play basketball regularly under professional supervision.

Porsche has sponsored the Porsche Tennis Grand Prix since 1978 and run it since 2002. Since 2012, Porsche has been a partner of the German Tennis Association (DTB), sponsoring both Porsche Team Germany and Porsche Talent Team Germany.

The next Porsche Tennis Grand Prix will take place from April 18 to 26 at the Porsche Arena in Stuttgart. For more information and all ticket sales: www.porsche-tennis.com