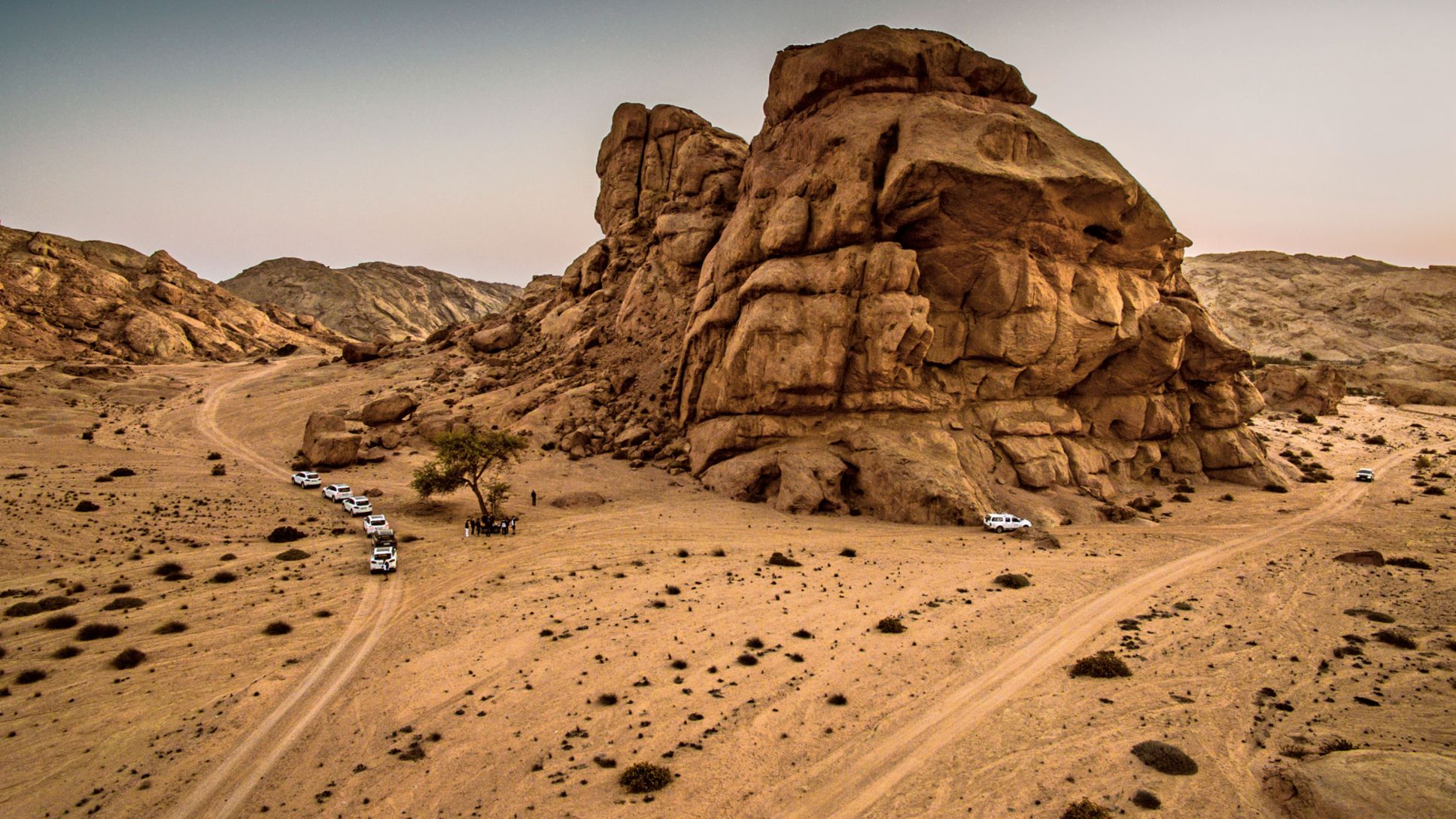 A safari in Namibia. Stunning surroundings, magnificent  natural scenery, and all manner of wildlife. On tour  with the Porsche Cayenne S in the backlands of southwest Africa.

A gemsbok—or oryx, the national animal of Namibia—suddenly bounds across the road. It turns its head with an inquisitive look and disappears just as quickly behind an enormous rock formation. The evening sun lends the stone a golden glow, and the wind plays with a few grains of sand. It is the perfect place for Hans-Joachim Baumgartl (54). It’s exactly how he pictured Namibia. A German physician from Landsberg am Lech, he planned to take a motorcycle tour of the country some twenty years ago. But as so often happens in life, studies, a family, and work intervened. Now he is here at last and fulfilling his dream—albeit on four wheels instead of two—on a trip with the Porsche Travel Club.

The Cayenne S flies over the dirt road. Dust swirls around the SUV’s tires, leaving a long trail floating in its wake. Geologists estimate that this expanse of rocky debris on the far side of Swakopmund is eighty million years old—one of the oldest deserts in the world. The radio crackles. Guide Frik Orban (48) alerts the group to another oryx on the side of the road. The Cayenne and its five companions slow down and come to a stop. Baumgartl pulls out his binoculars and brings the animal into focus. He remains fascinated for quite some time.

“I can hardly imagine a greater contrast to my work,” he says. As his eyes gaze out over the distance, he is finding new energy, perspective, and peace of mind in Namibia. Baumgartl is impressed by the perfect organization of this trip, the small group, the fine accommodations—and the comfortable SUVs. “The most beautiful thing is the friendliness of the people—along with the landscape, which is spectacular,” he adds. This trip to Africa will surely not be his last. That much is certain.

Namibia is more than twice the size of Japan, and you could fit about twenty Switzerlands within its borders. Only around 2.3 million people live in this country of nearly 320,000 square miles. But it is also home to over two hundred species of mammals, 645 species of birds, and numerous species of reptiles and amphibians. Not even one-fifth of its roads are paved. The dirt tracks start just a couple of miles outside the capital city of Windhoek—and with them the adventures. Bushes cling to the ground around an occasional acacia or lush, green mopani tree. Otherwise, all you can see is sand, sand, and more sand.

The Porsche Adventure Tour of Namibia includes the sand dunes of Sossusvlei, which can reach heights of 1,250 feet, the Namib-Naukluft National Park, Swakopmund and Damaraland, Twyfelfontein, and the Etosha Pan, a salt pan with an extensive array of wildlife. It is a dream come true for friends of Africa and animal lovers. “Compared to other African countries, Namibia has far more open space, as well as greater security,” says Orban. Vast expanses and animals in their natural habitat—that was exactly what Gudrun Schmer from Wuppertal-Sudberg was looking for. A fan of Africa, she and her husband are traveling in the southern part of the continent for the first time. Having previously arranged all of their trips on their own, the structured tour marks yet another first for the couple.

“This time we wanted to go on an organized safari, do some serious photography, see a lot of animals and as much natural scenery as possible,” she says. So the couple decided on a trip with the Travel Club. After all, they’ve both been driving Porsches for over thirty years. “It’s very practical that everything is perfectly planned,” she adds, “yet it also has character.” That character includes not only the well-stocked cooler in the Cayenne, but also the unique lodges. They offer both comfortable tents, with open-air showers and a view of the horizon, and traditionally styled round huts for camping. In the afternoon, a gentle desert breeze blows across the sprawling grasslands. The veranda of the Ongava Lodge in the southern part of the Etosha Pan is an inviting place to have a drink and observe wildlife.

On vacation with the Porsche Travel Club

Etosha means “great white place,” and indeed its salt pan measures around 1,850 square miles. Its inhabitants include more than 1,500 elephants, 300 lions, 400 cheetahs, 3,000 giraffes, and a few rhinos and leopards. The pan is usually dry, filling only occasionally after heavy rains. Then the animals are regular fixtures at its sixty watering holes. That’s when the gemsboks, kudus, gnus, impalas, and elands appear. Two herds of zebras stroll across the road: first the plains species, then their Hartmann’s mountain cousins. “You can tell them apart by the stripes on their legs,” explains Orban on the radio. The stripes serve as camouflage, and it’s hard to spot the animals in the shimmering heat.

A couple of miles later, a cheetah has just ripped apart an oryx. Her young offspring eat while she stands guard. The cycle of life—birth and death. Nearly two dozen vultures circle in the sky, waiting for the leftovers. Gudrun Schmer is awed by this display of nature. She and her husband both want to take another vacation with the Porsche Travel Club. In fact, they’ve already chosen their next destination. As a counterpoint to Africa, they’ll be taking a drift seminar in Finland—on ice. 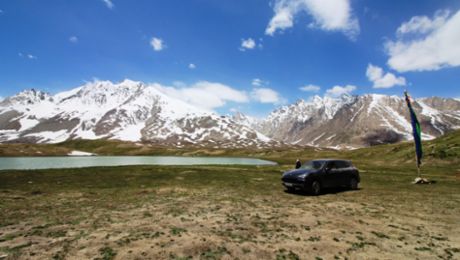 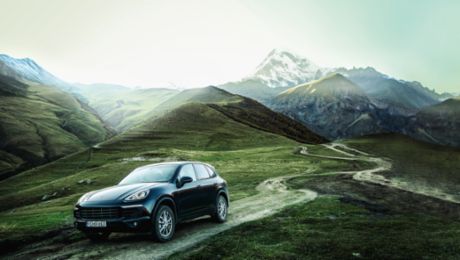 The Cayenne explores the Caucasus

From Turkey through Georgia to Azerbaijan in a Cayenne S.