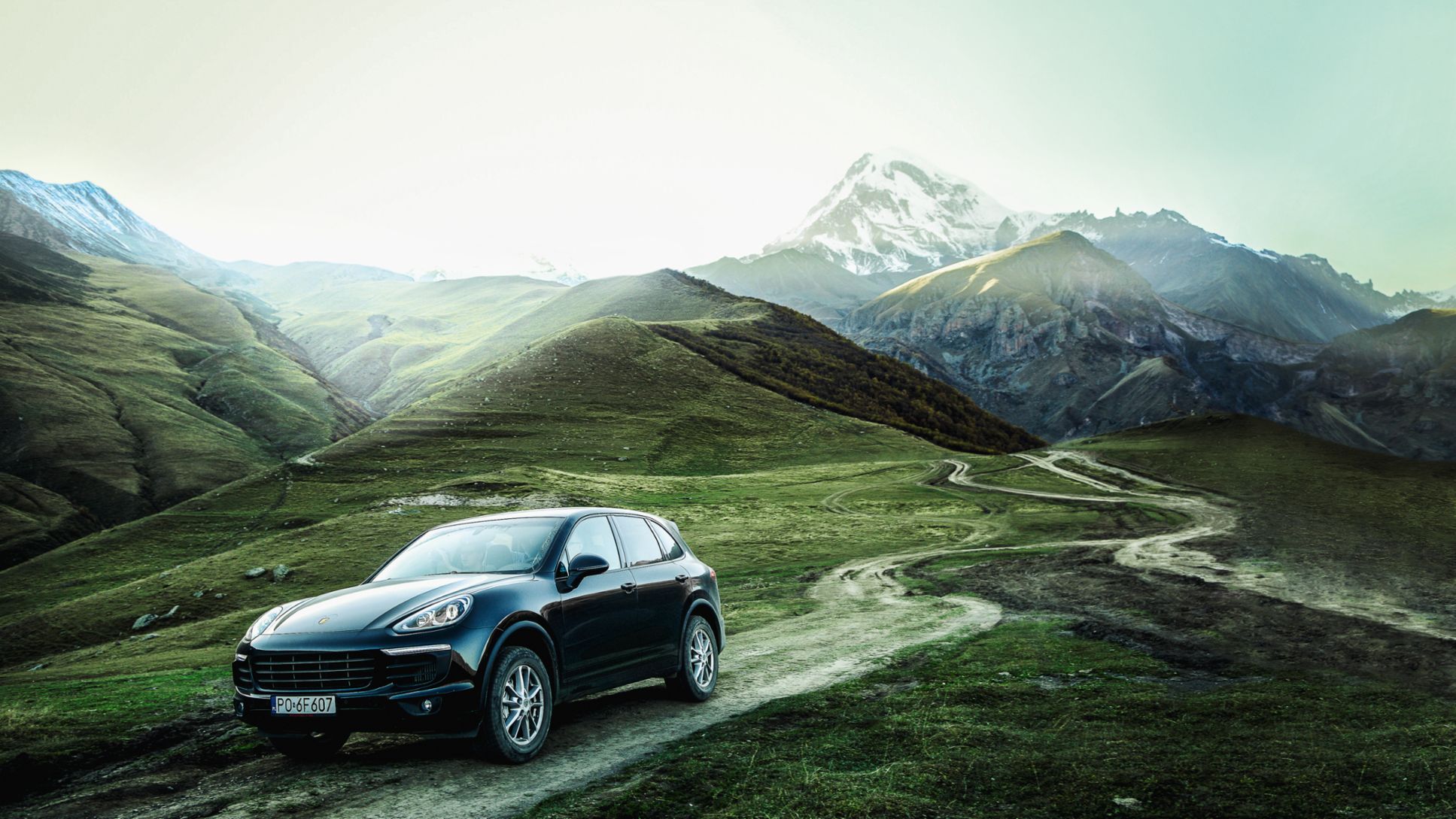 The Cayenne explores the Caucasus

From Turkey through Georgia to Azerbaijan: The new Cayenne S masters a challenging test.

The Georgian border guard checks our documents, rocking back and forth on his chair as he enters something into his computer. He glances from the screen to our car and back again. Something doesn’t seem right. We have to get out of the car and hand him our passports in his booth, which gives us the opportunity to peek over his shoulder. His screen shows a drop-down list of cars that have to be registered on entering the country: Porsche 964 Turbo, Porsche Boxster, and a third model we can’t see.

But we are traveling in a new Cayenne, which is nowhere to be found on his list. Clearly baffled, the officer discusses the matter with his colleague. He nods at her answer in satisfaction—and proceeds to click on the Boxster.

Our trip starts that morning in the Turkish city of Trabzon on the shore of the Black Sea. As we drive to a stunning remnant of medieval glory—the Sumela Monastery around 50 kilometers to the south—the villages become sparser, and the road and valley ever more narrow. A winding mountain road then follows, on which the Cayenne S can demonstrate its sporty qualities and let the high rocky outcrops covered with pine trees virtually fly by. However, the last stage of the trip to the monastery, a long staircase, has to be climbed  on foot.

Despite its overwhelming exterior appearance, the inner courtyard has a peaceful atmosphere. In quiet moments we can hear water dripping, as it has for ages, from the cliff into a specially built tank. Signs on both sides of the stairs indicate the way to the kitchen, bakery, and library. The signs have evidently been there since medieval times to show the monks the way to their bread and their books. The Ottoman sultans cannot be thanked enough for protecting the monastery. They allowed Greek Orthodox monks to live and work in Sumela for centuries. Beautiful frescoes covering the inside and outside of the stone church speak of times long past. Still impressed by their richness of color, we head back on the same road from Trabzon, then head up the coast to Georgia.

The Cayenne feels like a million dollars on the rough surface

Hardly have we crossed the border in the evening twilight when a herd of cows right past the first curve prompts us to slam on the brakes. Utterly unimpressed by the Cayenne, they completely block the road—without giving the slightest sign of changing this situation anytime soon; cows, a vast number of cows. They are everywhere here. You will see them standing in ditches, on rocky mountain slopes, or even hiding in the bushes as if they were leopards. They’re everywhere but on the meadows, and they seem to be particularly attracted to asphalt. If you drive too fast and don’t pay attention, you’ll end up hitting one. After ever-so-slowly forging a path through the herd, we continue driving carefully toward the resort town of Batumi, arriving late at night.

The next morning we depart for Tbilisi as the rising sun illuminates Georgia in all its glory. From Batumi in the autonomous republic of Ajaria we first head north, then northeast toward Kutaisi and then to the east. We decide to take a shortcut south in order to put the new Cayenne to the test. We quickly learned that in Georgia, even if your road is marked on the map with a thick red line, it means nothing more than that the road exists. The line on the map doesn’t give you any information about its width, number of lanes, or surface quality. There is only one thing you can be sure of: cows.

The further we drive into the countryside, the worse the roads become. They start off well paved, then we see a few potholes here and there, and suddenly we’re on a bumpy gravel road which soon begins climbing and winding its way through the Meskheti mountain range. The midday sunlight brings out the full intensity of color on its gentle tree-lined slopes. A gorgeous view—and a gorgeous start. The Cayenne feels like a million dollars on the rough surface, and we let it run free. It isn’t fazed by the deepest potholes or the tightest curves, or even a ditch that needs to be traversed when the road is blocked by a truck piled high with hay. We leave the resort town of Borjomi, which is famous for its spring water, and finally reach Tbilisi.

The following day takes us up into the Caucasus Mountains. The S3 highway, better known as the Georgian Military Road, starts north of Tbilisi. Its name derives from the fact that the Russians built it in the nineteenth century in order to consolidate their hold on the recently conquered Caucasus region. Despite constant renovation, its broken surface and frequent gravel segments make it look like time came to a standstill after construction.

But the landscape more than compensates. For example, the Zhinvali reservoir, a giant V, with the Ananuri castle rising above its turquoise waters, as if in a fairy tale. We drive through the picturesque Aragvi river valley, surrounded by an ever higher succession of peaks. On the eastern side of the valley, after a series of sharp switchbacks seemingly designed to show off the Cayenne’s handling, the road leads up an impressive slope to the Gudauri ski resort. Then there is the vast and austere Tergi valley, where a mineral spring with a high level of iron lends the rocks an orange-red hue. We finally reach Stepantsminda (formerly Kazbegi), and are speechless.

Peter Jackson could just have well filmed The Lord of the Rings here. This entrancing village lies in the midst of sharp ridges that look remarkably like the Misty Mountains in the famous trilogy. Above it all towers the massive snowy summit of the dormant Kaz­bek volcano, with the Trinity Church perching on a nearby hill. Reaching the church becomes a highlight in itself, as it entails the obstacle course of a narrow, muddy, and deeply rutted track. For what is nor­mally a three-hour hike, our Cayenne takes fewer than thirty minutes.

Still another 700 kilometers to Baku, on the edge of the Caspian Sea. We turn off the military road to the east. Countless trucks on the bumpy stretch up to the pass raise clouds of dust that make it impossible to see almost anything. As the road descends the dust disperses and we gaze down the steep slope onto the immense plain of the province of Kakheti. The chill of the Caucasus has given way to a nearly shimmering heat. A perfect climate for grapes—with one vineyard after the other. It is no coincidence that wines from this area are well known worldwide.

Soon thereafter we reach the border of Azerbaijan, where we exchange questioning glances on spotting the sign that reads “Good luck.” Like in a James Bond movie or a John le Carré novel, we are required to get out of our cars and walk over the bridge to cross the border. The formalities take about an hour, and then we’re in Azerbaijan, welcomed by its flag fluttering in the south wind.

Despite some similarities with Georgia, this country is far more prosperous—it is oil-rich. Slowly but surely we approach Baku as darkness lowers an impenetrable veil over the countryside. It is late in the evening when our Cayenne joins the hectic traffic on the streets of the capital city. After four days and 1,500 kilometers, we have reached our final destination. There’s just a short stretch to the hotel, and then both the drivers and the car can proudly say that they have mastered the challenge. 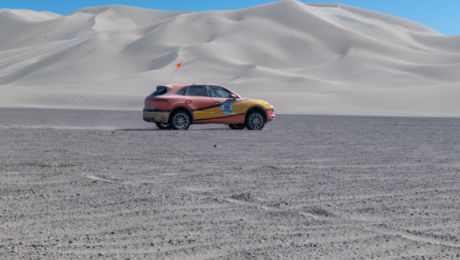 Ruby and The Wanderettes: a rally adventure with the Cayenne

Experiencing Midsummer with the Porsche Cayenne

Bloggers Mia Bühler and Thies Janknecht discover the world of camping with their son Neon. 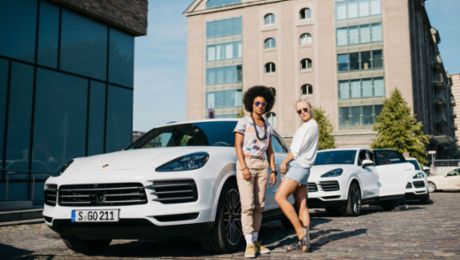