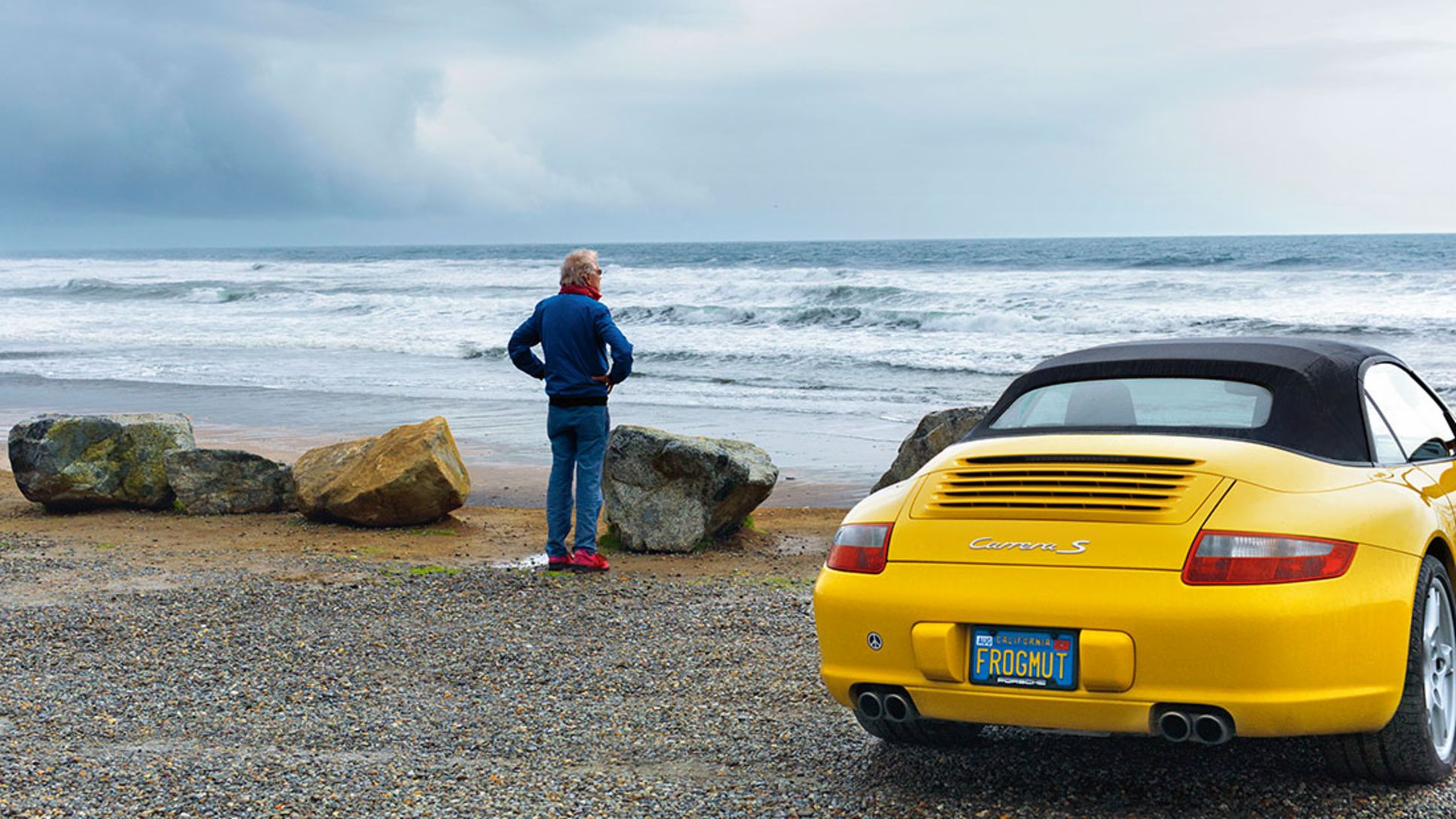 When it comes to cars, the renowned designer Hartmut Esslinger favors consummate symmetry. He drives two 911 Carrera S Cabriolets: one stationed  at his home in Northern California, and the other in the Black Forest.

Upon approaching the only modern house on this secluded street in Los Gatos, it is obvious where the automotive loyalties of the owner lie. Behind the glass door of the garage sits an eye-catching Speed Yellow Porsche 911 Carrera S  with California plates bearing the moniker “Frogmut.” “FROG” for the international design firm and “MUT” for Hartmut Esslinger, its founder.

Not one for privacy, Mr. Esslinger? “I like to see my Porsche when I come home,” murmurs the German native in his Black Forest–infused English. He sits on a chair by Danish designer Arne Jacobsen in his house in Silicon Valley and sips his espresso. For the past twenty years, Esslinger has lived here with his wife, Patricia Roller, with whom he jointly ran frog design for about as long. Their children have since moved out, and two years ago the couple finally redesigned their home. “It’s a bit of Bauhaus and a bit of Frank Lloyd Wright,” Esslinger explains.

And, of course, a bit of Esslinger. After all, the man of the house is a leading industrial designer and founder of an institution of revolutionary product design. Esslinger originally established Esslinger Design in Mutlangen, Germany, near Stuttgart, in 1969, but renamed the company frog design thirteen years later. With his legendary designs, success came rather quickly: the Tribel showerhead created for Hansgrohe in 1974 was a huge success, selling fifteen million units. The black box design for Sony’s Trinitron TV brought an end to the era of wood paneling in the entertainment electronics industry.

Esslinger’s vision has shaped the products of countless international companies—including Disney, Louis Vuitton, Lufthansa, Microsoft, Olympus, and SAP. But sleek design was not the only way he accumulated such a prominent  customer base. Esslinger has long advocated the idea that design should not just be artful packaging, but rather must be a strategic component of every  company. It is the lifelong philosophy of an unconventional thinker who, frustratedwith the “idea of beautification and the elitist chatter of many of my fellow students,” never completed his university studies.

Design should express the soul of a product

No one took Esslinger’s message to heart more than Apple founder Steve Jobs, who called Esslinger to California in 1982. The German innovator was brought in to help Jobs with the development of a design and color concept that would distinguish the computer company from the rest of  the industry. Together, Jobs and Esslinger developed “Snow White,” a design language that defined the appearance of Apple computers for years. His work for Apple was the start of not only Esslinger and frog’s global renown, but also the lifelong friendship of two nonconformists known for their unvarnished candidness.

“It was never boring with him,” Esslinger reminisces, bowing his head wistfully. Jobs died in 2011 at the age of just 56. The Apple founder and Porsche driver was effusive in his admiration of German cars, Esslinger recalls. In his book Keep It Simple: The Early Design Years of Apple, Esslinger wrote that he used Porsche as an example to show Jobs how design should express the soul of a product: “Without the excellent driving experience and the history of stellar performance, a Porsche would be just another nice car—but it wouldn’t be a Porsche.”

The design and driving pleasure of a Porsche 911

Although Esslinger likes to display his Porsche 911 behind a glass garage door, he prefers to keep selected pieces out of sight from visitors—the Swabian understatement of an adoptive Californian. These pieces are kept hidden away in his bedroom upstairs. In austere showcases, like museum exhibits, stands a collection of Sony Discmans and Walkmans, two jet-black NeXT computers designed for Steve Jobs, and a Baby Mac designed for Apple in 1985—a prototype that never saw the light of day. The industrial designer, who as a boy dreamt of a career as a vehicle designer, has owned dozens of vehicles and driven sports cars from every major brand. But for Esslinger, nothing equals the design and driving pleasure of a Porsche 911. He bought his first one—silver with a blue roof—in 1983, and has remained an avowed 911 fan ever since.

The design is more than just the iconic sports-car lines, says Esslinger: “The active experience of sporty driving, the mechanically direct feel of the technology, and the compactness are authentic. The car doesn’t need any fashionable crease lines; the proportions are dynamic.” But what does an influential shape-designer like him expect from a Porsche? “Innovation and technological mastery. You have to sense that the people in development and production approach the work with real passion. A saved kilogram is worth more than additional power—so as little ballast as possible. Essentially, it’s a purist car.”

Esslinger circles the 911 in his immaculate garage. The Porsche, bought in 2006, looks brand-new. The interior and roof are dark blue, but the five round instruments behind the narrow sport steering wheel shine in yellow, as do the ceramic brakes. “I love colors,” explains the Swabian expat, who is always brightly attired: baggy jeans, a blue knit sweater over a blue shirt, gray socks, and a red jacket. The vibrant hues of an unflappable optimist and free-thinking man of the 1960s.  He is also a man of habit: Esslinger owns another Porsche 911 Carrera S. Also a cabriolet. Also in Speed Yellow. And also with a blue roof and interior. The twin of the California Porsche resides in a garage in the Black Forest. In Bad Wildbad, to be precise, about 60 miles away from Esslinger’s birthplace in Beuren. The designer spends a few weeks in Germany every year. And, naturally, he wants to drive a 911 there too. The only difference between the two cars is one of practicality: the German model is an all-wheel-drive 911. The one in California has rear-wheel drive, simply because there is no snow in Los Gatos.

But why buy two cabriolets, same model and color? “Just playing it safe,” explains Esslinger. He doesn’t want to be distracted by an unfamiliar color. “So when I buy a new 911, I’ll have to buy two,” he chuckles as he slides into the blue seat—after swapping his Birkenstock sandals for raspberry- red sneakers and putting on a matching white-dotted scarf and a royal blue coat.

Speed Yellow perfectly matching the center line of the road

Esslinger heads off on his favorite route: the Old Santa Cruz Highway, a winding road that crawls through the sparsely populated Santa Cruz Mountains, which separate Los Gatos and Silicon Valley from the Pacific. The 911 glides toward the surfer city of Santa Cruz, and the journey proves to be no less colorful than Esslinger’s attire: the Speed Yellow perfectly matching the center line of the road, the vibrant green leaves, and the red-brown trunks of the redwoods, which seem to tower even higher into the heavens from the frog’s-eye view of the 911. The route has a meditative quality, says Esslinger, who usually prefers the purr of the engine to music.

Esslinger and his wife sold frog a few years ago, but remain the largest private shareholders. He has barely slowed his pace since stepping back in 2008. He is the chief design officer of the Chinese media and technology company LeEco (formerly Letv), teaches strategic design at the DeTao Masters Academy in Shanghai, which he helped establish, and advises CEOs on the development of global brands. “I’m a workaholic,” concedes Esslinger. He parks his Porsche at the beach of Big Basin Redwoods State Park and takes in the view of the churning Pacific. “But I regularly take the time to drive out here in my 911, to clear my head and think of new ideas.”

John Baekelmans is CTO at Cisco and sees far into the future. 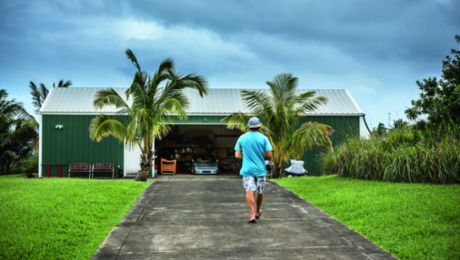 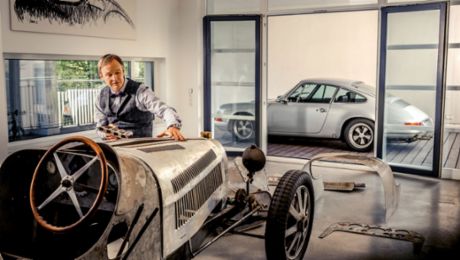 Jeffrey Docherty blends playfulness and hidden meaning with a passion for lines and historical racing cars into works of Porsche art.