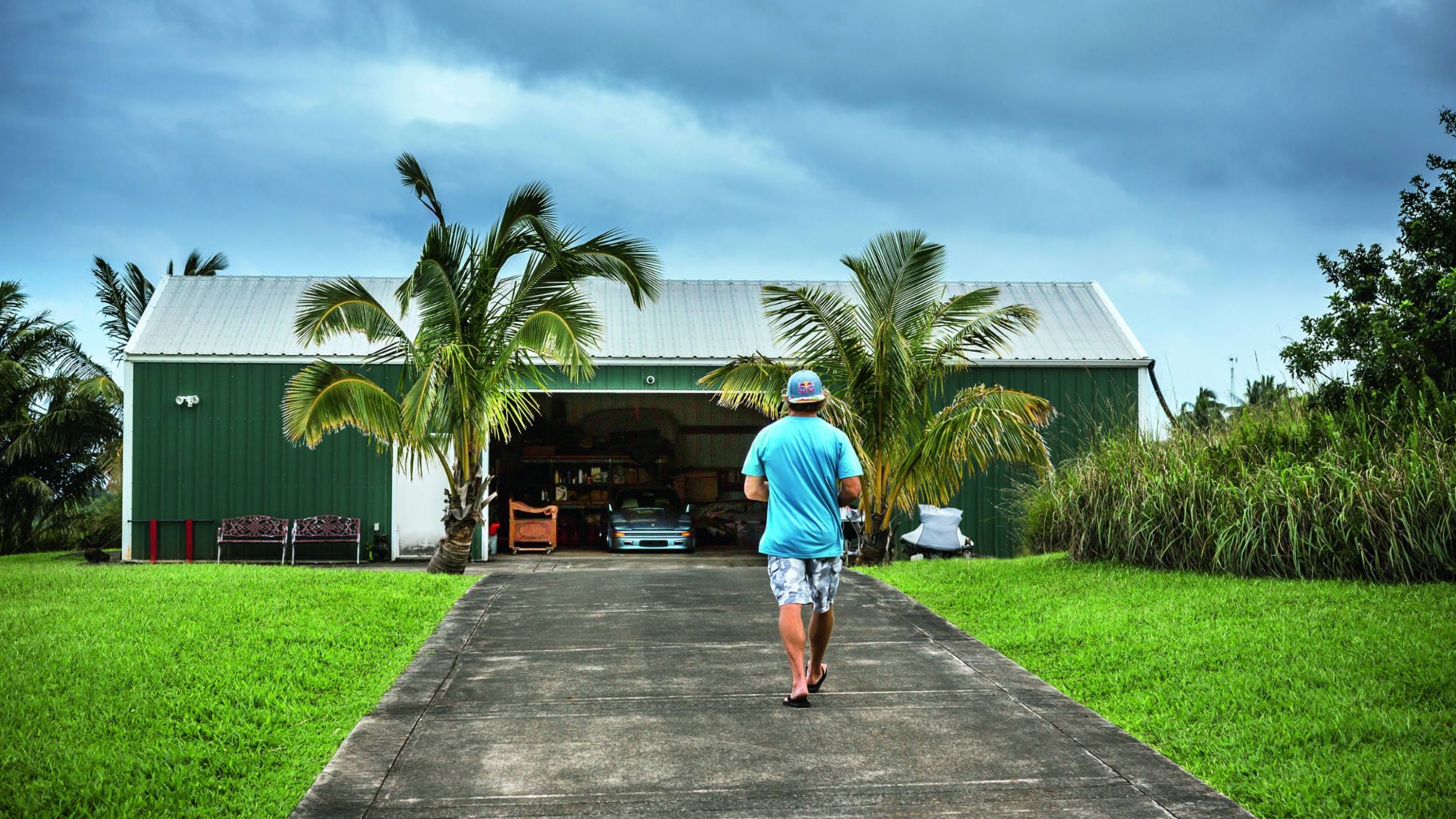 Robby Naish stands bare-chested in the water. His element. Or so one might think. Yet it is not the lukewarm waters of the beach in Maui that slosh around his legs. As we arrive, the windsurfing legend and 24-time world champion is standing in his flooded garage and looking a bit peeved. A defective water pump had caused the well to overflow the night before. Again. Such is life off the grid amid the lush green of the North Shore of Maui. The king of the reef is on squeegee duty now, and he’ll have to arrange to have thousands of liters of water trucked in until the well is fixed too.

But when you live on a 30-hectare patch of land with an unadulterated view of the Pacific, coconut palms, and trees abounding in bananas, papayas, lemons, and limes, you roll with the punches. Naish and his wife Katie moved to their wind- and water-­dominated paradise some eleven years ago. “I wanted to buy a piece of Hawaii,” says Naish. “Before it’s all gone.” Naish’s garage—a barn made of green corrugated metal—is a microcosm of his passions: surfing and cars. Lined up against the walls, alongside sails and wishbone booms, are dozens of surfboards. Historic boards from Quiksilver—a few with Porsche decals—Mistral, and, of course, Naish, his company, which the windsurfing pioneer has turned into one of the biggest manufacturers of material for wind­surfing, kiteboarding, surfing, and paddleboarding.

Naish began windsurfing at the age of eleven, after his family moved from California to Hawaii when he was four years old. At age thirteen he became the youngest windsurfing world champion in history. No one has ever dominated the sport the way he did; later he went on to have an impact on kitesurfing and was involved in the development of numerous technical innovations. Today, at 52, he still rides towering waves and sails through the air as often as he can. Occasionally he even takes to the waves in competitions. Notwithstanding the surfing gear, a tractor, a go-kart, and two four-wheelers, the barn still has plenty of space for Naish’s other passion.

Exhibit A is the 2012 Silver Grey 911 Carrera S with the Sport Chrono package. “When it comes to the feeling of driving combined with the power, Porsche is in a class of its own,” gushes Naish. “I love the design integrity that Porsche has maintained down through the decades and that you can drive them in races without having to change a thing. Every manufacturer does races, but the amount of work they have to do with their cars before they’re ready to go …”.

Exhibit B is the 1977 911 S. The Iris Blue body sparkles with an exuberance to match the Pacific and the sky above. Naish bought it in California in 1987 and has been modifying it ever since. “The car’s a bastard, nothing’s original.” Among other things, he outfitted the 911 with a “wide body” slantnose, a 3.0-liter, 169-kW (230-hp) big-bore engine, a Weber dual carburetor, a racing clutch, and Simmons racing wheels. That the 38-year-old body of the 911 looks like new is due in part to its well-protected shelter in the garage, but also to the fact that Robby cares for it like one of his boards. He starts the engine and does a mini-lap in front of the barn. A startled pheasant bolts out of the bushes and disappears in the tall grass. Naish hasn’t driven more than 6,300 kilo­meters in the car. Sell it? Never. “Even if it didn’t have an engine, I would still sit down in front of it every day and just look at it.”

Alas, Naish can’t really take his sports car out for a proper spin. It’s the curse of Maui, the most beautiful of the eight main Hawaiian islands. At 1,883 square kilometers, Maui has few roads suitable for speedsters. There are no freeways, and the only racetrack was shut down ten years ago. You can’t drive faster than 90 km/h anywhere anyway. In most places, the speed limit is 55 km/h or lower. The few highways, the roads hugging the breathtaking coastline, and the numerous winding mountain roads are heavily traveled, both by the locals and the leisurely throngs of tourists. “You can never drive fast for an hour here. But you might be able to drive for an hour and have a few brief exciting moments here and there, when you have the chance to take two or three corners in a row without disturbance.”

Route 37 wends its way up to the crater of the 3,000-meter volcano Haleakalā

Naish, whose eldest daughter Nani has made him a grandfather, especially recommends Route 37, which wends its way up to the crater of the 3,000-meter volcano Haleakalā. “I drive up there probably once a year,” says Naish, squinting as he looks up at the volcano. The hassle with the well has stoked Naish’s hunger. He wants to grab a bite to eat, but first he wants to show us his second garage. We drive along behind him and his 911 Carrera S through a series of potholes up to Hāna Highway, where the pace picks up on our way to Haiku.

This unassuming town is the home of the Naish company, as well as a small house owned by Naish. The driveway is dominated by a Ford F-650, a five-ton colossus that Naish used to drive around every day. “I like trucks, but at some point it just got ridiculous to drive that thing around all the time.” Whenever he goes surfing, he packs his boards and sails into his inconspicuous Chevy Sonic, which looks like a toy car next to his monster truck. The car in the second garage is the polar opposite of inconspicuous: a bright yellow Evans Series One from 1991. A street-legal race car from John Evans, a small-volume manufacturer in Scottdale, Georgia. Only two were made.

But he concedes that he very rarely drives it, because—and here is the great contradiction with this world-famous windsurfing star who has been photographed and filmed hundreds of thousands of times: “I’m shy and introverted, not very social, and I honestly don’t really enjoy having people around me. But looking at my cars, anyone would think I was some totally idiotic show-off.” He just loves cars, he says simply. His favorite time to drive around the island is at three in the morning, when the roads are empty and no one sees him. For all that, Robby Naish is anything but standoffish, as we find confirmed once again when we get to Haiku.

The man with sun-bleached locks and deep blue eyes, buff bod in shorts and flip-flops—the very epitome of a surfer—greets the locals cheerily. He wants to eat at the modest fast-food restaurant in town, a Chinese place with the air of a McDonalds, where everything is served in Styrofoam. No one cranes their necks to get a look at him here. Naish downs his double cheeseburger and fries and soon we’re off to Ho‘okipa, arguably the most renowned windsurfing beach in the world. Low-hanging clouds cast a gloomy pall on the sky, combining with the turbulent water to create a beautifully wild palette of grey, blue, and green.

Leave with a warm Aloha

A few wave-riders are bobbing about on the boards far off shore, but otherwise there’s no one around. Naish parks his 911 on the shoulder, gets out of the car, and scans the Pacific. “Yesterday I kitesurfed here for a couple hours completely alone; there was no one else on the water—it was awesome. The weather was really bad: clouds, gusts, big surf—the waves were three times as high as they are now.” Ideal conditions for a master. It starts to sprinkle. “Liquid sunshine,” says Naish with a grin before taking his leave with a warm Aloha. He climbs into his 911 and waits patiently until he can slot into a spot in the dense traffic on Hāna Highway.