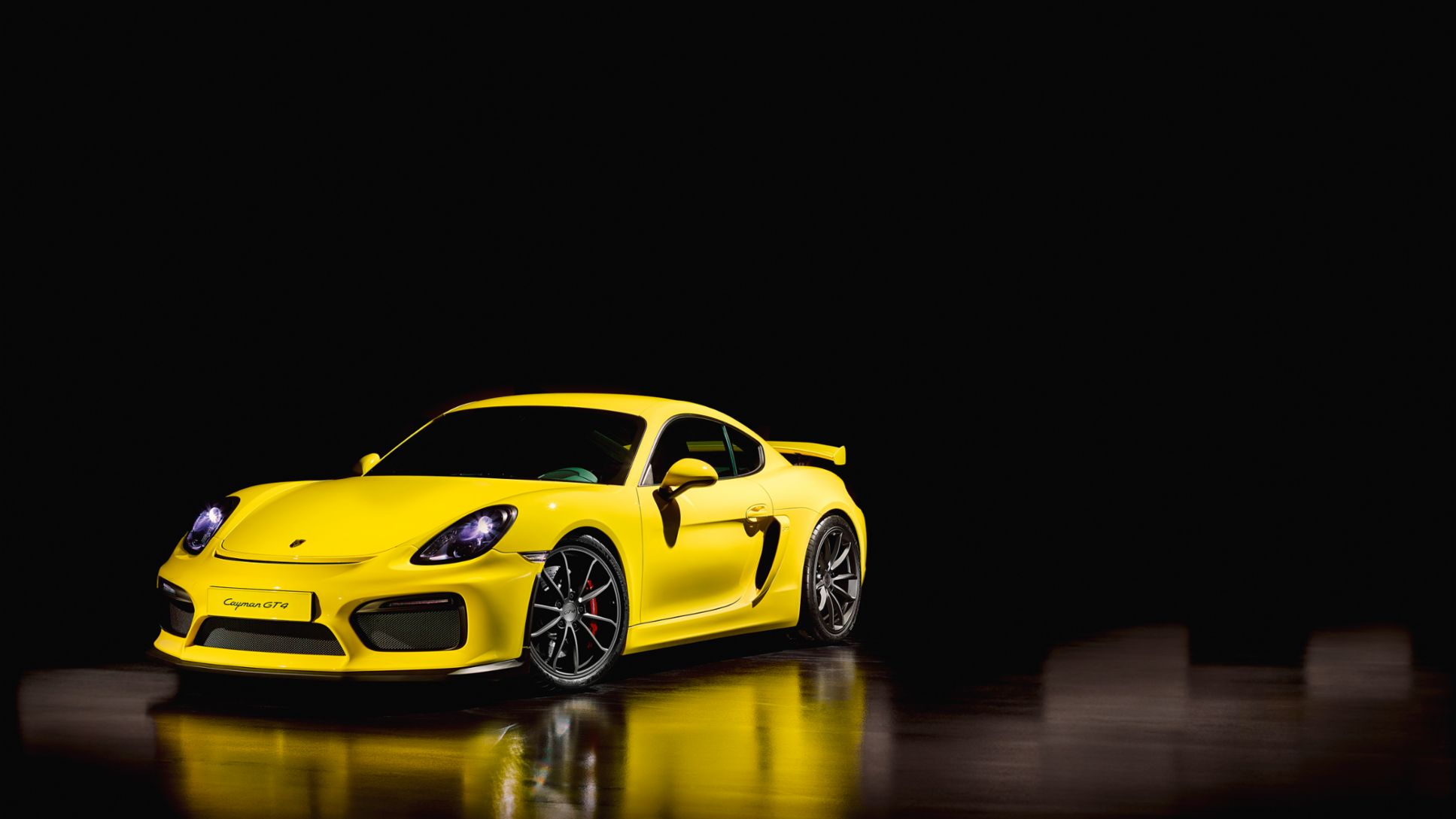 The floor is dark and shiny. Workshop space is visible behind large glass windows on both sides of the corridor. The place exudes a sparkling clean, high-tech ambiance, with tools lined up like surgical instruments and engines and suspension components fixed on assembly banks. It’s late on a Friday afternoon, and the weekend is about to begin, but at Porsche’s motorsport department the work atmosphere is highly concentrated.

GT Project Director Andreas Preuninger walks down the corridor and comes to a stop before one of the doors. “We in the GT team have always had our eyes on the Cayman, because its mid-engine configuration is very exciting. It’s extremely maneuverable, a genius in driving pleasure. It’s time for it too to get its racing badge …” He pushes the handle and then leans against the door with a sly wink.

The room is dark; the only light comes from the corridor. It casts a shimmer onto the floor, the walls, and the contours of a car, painted yellow. Then the door closes behind us and we’re standing in the dark. Preuninger feels for the light switch, and a second later neon ceiling lamps flood the room with intense, nearly clinical, white light. There is the aggressively styled Cayman, just a few steps away. Crouched as if waiting to attack, it has powerful wheels with a GT3 design, side blades on the lateral air inlets, and a mighty wing at the rear.

“A car that places a premium on emotion and the experience of driving.”

The GT project director notes my speechlessness with satisfaction, and then places his hands casually on his hips. “This car is our message to a circle of Porsche fans who are particularly dear to our hearts—the hobby racers. The Cayman GT4 says, ‘We’ve heard you!’” While we take in the Cayman’s athletic air, Preuninger explains the concept. In an age of modern technology, the engineer notes, the rule for developing racing cars and uncompromising road cars, namely, “Slim down, reduce the weight, remove anything superfluous, and the car will automatically become faster,” no longer applies unconditionally. “But we’ve pursued it resolutely in the Cayman GT4. For example, the car comes with six-speed manual transmission only.”

Preuninger opens the door on the driver’s side and points invitingly to the cockpit. A minute later I’m sitting behind the wheel, inspecting everything with inquiring eyes, discovering the puristic loops that replace conventional door handles. Lost in thought, I click the shortened gear lever from one position to the next. Preuninger leans his arms on the roof and looks in. “Our amazingly fast 911 GT3 models have made space for a car that places a premium on emotion and the experience of driving. And that’s the car you’re sitting in now!” he exclaims, his eyebrows rising eloquently.

While Preuninger spends the next several minutes explaining the technology in the Cayman GT4, I keep drifting into daydream. The GT4 has such an animalistic air that I can already see myself on a challenging racetrack, or on my favorite curvy solitary road on a Sunday morning. With a hoarse, throaty sound, the large-volume 3.8-liter drive system from the 911 Carrera S provides a hefty kick. The Cayman’s six-cylin­der engine was specially tuned with different valve timing and given its own injection system. Its 283 kW (385 hp) and 420 Nm of torque meet the 1,345 kilograms of the fully tanked GT4—and the result is an unexpectedly bone-dry punch and a charged, ecstatic driving experience.

And then, of course, there is the mid-engine configuration. Connoisseurs already know how immediately and directly the Cayman prowls through tight alternating curves, and this basic property has been enhanced to the absolute maximum in the GT4. With a faintly conspiratorial tone to his voice, Preuninger explains that “the chassis of the GT4 comes in large part from the 911 GT3: Porsche Active Suspension Management, different wheel bearings, much larger composite brakes with steel rotors and aluminum hubs, adjustable stabilizers. The rear axle is of course completely new on account of the mid-engine con­figuration …”

Preuninger enumerates the technical features in staccato tones, enlisting his fingers for help. “… Different camber, adjustable track control arms, different coupling points …” My head is already spinning, but Preuninger keeps pounding out the technical details. “Unibal joints in the wheel bearings remove the last elasticity and bring a precision to the car not even found in the Cayman GTS. Even the steering is tuned differently than in standard-series cars, oriented much more toward race-type driving. If you can deal with the information provided by the car’s extremely high level of precision, you’ve got a great combination of driving pleasure and performance.”

I venture that the GT4 is not only the ultimate Cayman—a highly concentrated dose thereof—but also the attempt to create a car that is capable of accompanying all the stages of development that its driver goes through while still offering him or her even further potential. Preuninger beams at this thought and nods. “That’s exactly right. We use components that can do much more than what is required. And the driver can delve into and explore them. Or simply inhale pure driving pleasure.”

“Anyone can stick a huge board back there.”

As I get out I pull on the loops that open the door while Preuninger grins. “They’re not any lighter than the handles in standard-series cars, but they pick up on the great Porsche tradition of showing uncompromising sportiness. And purists are, of course, invited to configure a perfect car for the racetrack with the Cayman GT4: no radio or air-conditioning, especially lightweight bucket racing seats; in short, nothing but a pure car.”

Standing in the workshop again, looking at the yellow racing hero one more time, Preuninger follows my gaze and provides impromptu commentary on the details. “The side blades are not a cosmetic feature. They ensure that the air has a higher flow rate when it enters the injection tract—to cover the engine’s greater need for air.”

When I stop at the rear to inspect the large wing, he waxes passionate yet again. “Anyone can stick a huge board back there, but it’s an art to achieve the perfect aerodynamic balance between the drag coefficient and the downforce, a balance between aerodynamic and mechanical grip. One hundred kilos of downforce at high speeds—just imagine how you’re flying along the Nordschleife of the Nürburgring at the Schweden­kreuz, and then feel how solidly the car sits on the road and how stable it is in its response.” That is precisely what I’ve been imagining all along; in fact, I’ve been doing nothing else.

Fit for the racetrack

The sportiest interpretation of the 911 is more  of a race car than ever before. 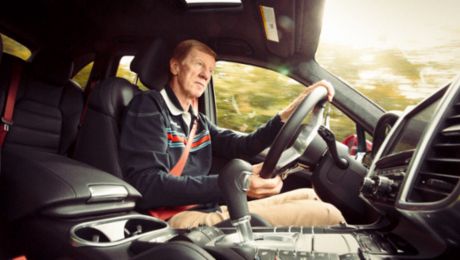 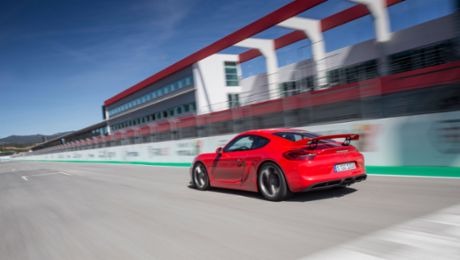 Onto the racetrack with the Cayman GT4

Journalists have been testing the new Cayman GT4.