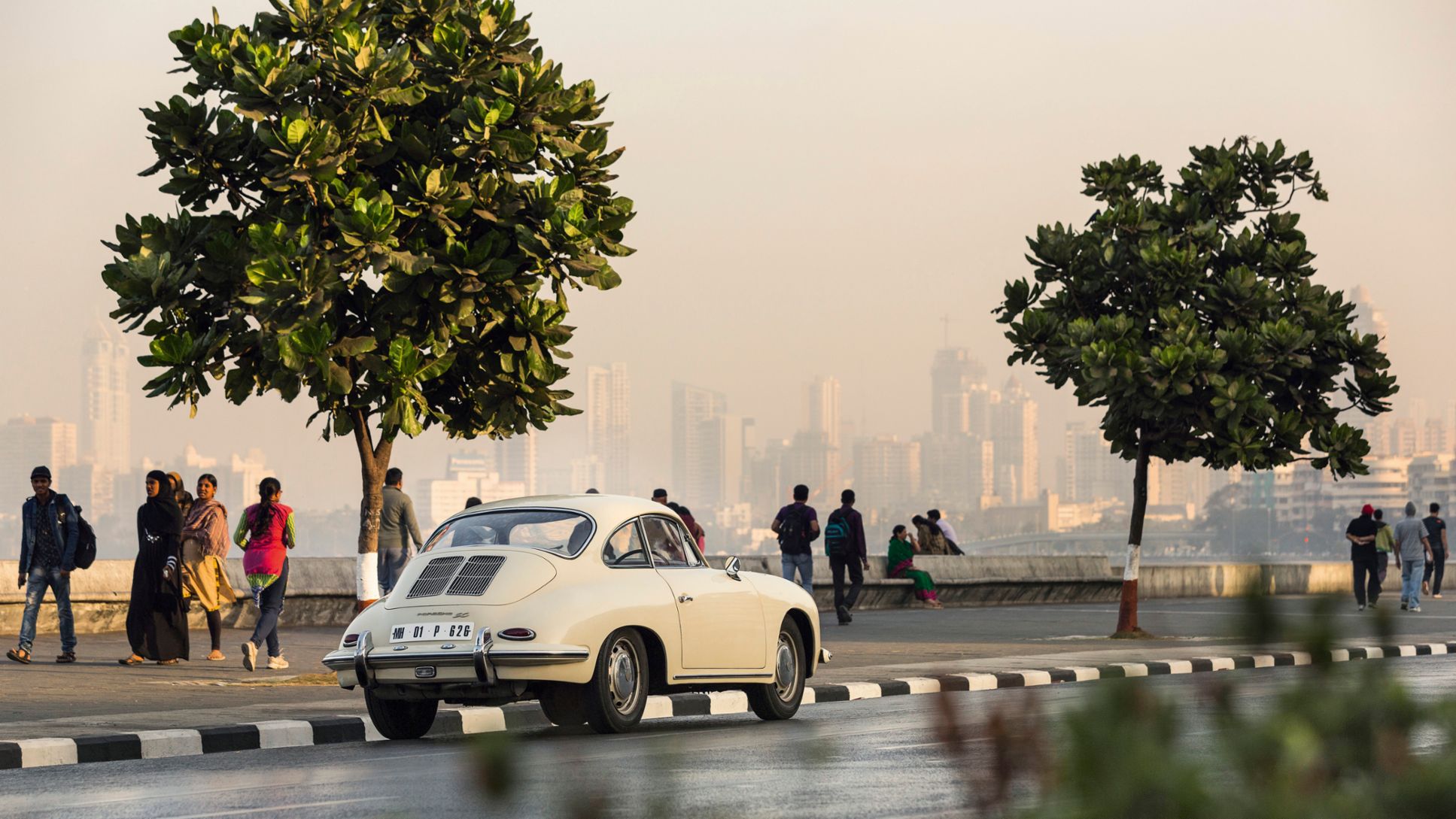 His home and his garage are separated by a distance of 7,192 kilometers. Rajendra Kumar Jain lives and works in London. But his Porsche 356 SC lives in Mumbai — a long-­distance love affair.

Mumbai — a throbbing powerhouse of a city, the epicenter of a world in which opportunities are no longer defined by geography. The city’s high rises soar skyward, as do the dreams, aspirations, ambitions, and hopes of its twelve million inhabitants. Like all metropolises, Mumbai never sleeps. Yet every once in a while, and entirely unexpectedly, it can pause for a moment. Or at least for a second.

This is one of those moments. Fingers point. Eyes widen. Mouths open. Heads turn. Pedestrians stop in their tracks. Camera phones go into action. A fluid shape is approaching with that unmistakable engine sound emerging from the rear. It has a low-slung body and compact dimensions. In the sea of Maruti Suzuki vehicles on this street, it seems like a flying saucer from an alien civilization. Everyone who sees this white Porsche stops what they are doing. The gesticulating traffic cop. The jaded driver of a black-and-yellow taxi. The harried housewife. The stressed-out executive. Even the busload of noisy schoolchildren falls silent.

An objet d’art on wheels

In this hurly-burly city, few things surprise. There’s very little that its people have not seen or heard. But this moment is an exception, and this car is something completely different: one of a kind and probably the only 356 SC still to be found in India. True, the country has an incredible number of classic cars. Private collections house exquisite examples of automotive coachwork built to the specifications of fabulously wealthy maharajas. But this 1965 Porsche with a boxer engine has no royal Indian provenance. It got here because its current owner, Rajendra Kumar Jain, who goes by the name Raj once lost his way.

Raj Jain actually lives and works in London. In keeping with India’s love for abbreviations, he is an OCI cardholder. OCI stands for Overseas Citizen­ship of India, an official status for Indians residing outside the country. One of them is Raj, who holds a British passport and travels the world on business.

The car found him

A dealer of art, antiques, collector’s watches, and valuable curios with a shop on Bond Street in London’s upscale Mayfair neighborhood, Raj Jain is no stranger to rare and beautiful objects. A classic Porsche feels as much at home in his garage as the copy of Antiques Trade Gazette does in his spacious southern Mumbai apartment with an impressive view of the sea.

Raj was not looking for a 356. The car found him. “It was karma,” he says in his clipped British accent. It was meant to be. Sometime back in the early 1990s he was wandering through the halls of Christie’s, the famous auction house. He happened to walk into the wrong room. “And I saw this beautiful, immaculate car.” It was on auction for no reserve, meaning no minimum bid. “I instinctively raised my hand.” There were other bidders, but none with real drive. Raj promptly bought the car, and for under a thousand pounds. A bargain, even then.

An exotic bird that thrives on attention

Instead of parking the car near his home in South Kensington, he shipped it to Mumbai. He usually goes there twice a year on business and to visit his family—and now to visit the Porsche too. This 356 is not the first of its type in India. The Maharaja of Sawantwadi is reported to have brought a rare pre-series model of the 356 A to the country decades ago. Old photographs clearly show the car—but in the meantime it seems to have disappeared, so Raj considers himself the owner of the country’s only known working 356. Like any exotic bird that thrives on attention, the car throws the odd tantrum. But mostly it runs smoothly.

To keep the Porsche in good working order, Raj used to have it thoroughly checked every two years by Barry Curtis, a renowned British specialist in 356s. Curtis would stay in Raj’s home and work on the car in his well-equipped garage. “Barry used to overhaul the engine, strip every part, every nut and bolt, and rebuild it,” says Jain. “I installed an air conditioner in the garage so he could work even when it was extremely hot outside.” Then, about two years ago, Barry passed away. The car still seems to miss him. Sometimes it refuses to start, on occasion it misfires, and it generally seems a bit sullen these days. As the keeper of the car’s soul, Barry is memorialized on the cover of its engine fan in the form of his calling card. Made of extremely thin metal and embossed with his name, it adds a very individual touch.

With a smile on his lips, Raj dives right into the organized chaos of traffic in Mumbai. For anyone new to this melting pot of religions, languages, and cultures, the city can seem bizarre and bewildering. But its magic takes hold as soon as you meet Mumbai’s residents and discover their gift for making just about anything possible.

Raj guides the car and its 95 horsepower through the slalom course of lanes with evident pleasure, while attracting no little attention in the process. He leaves the noisy main streets and enters a series of tree-lined lanes with small, ornate tea shops. Only when darkness falls do heads stop turning, and shortly thereafter the Porsche 356 SC returns to its garage. Raj gazes at it for a long time, takes a seat in front of the open garage door, and remarks, “This car was meant for me.” 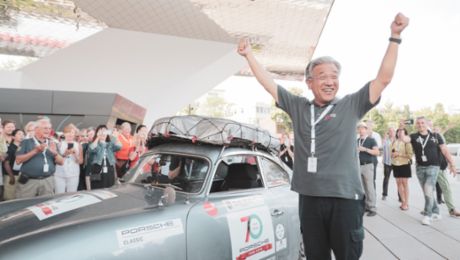 356: A spiritual journey in its 70th anniversary year

Toshiyuki Suzuki, a 60-year-old businessman, husband and father, has made a trip from Japan to Zuffenhausen.