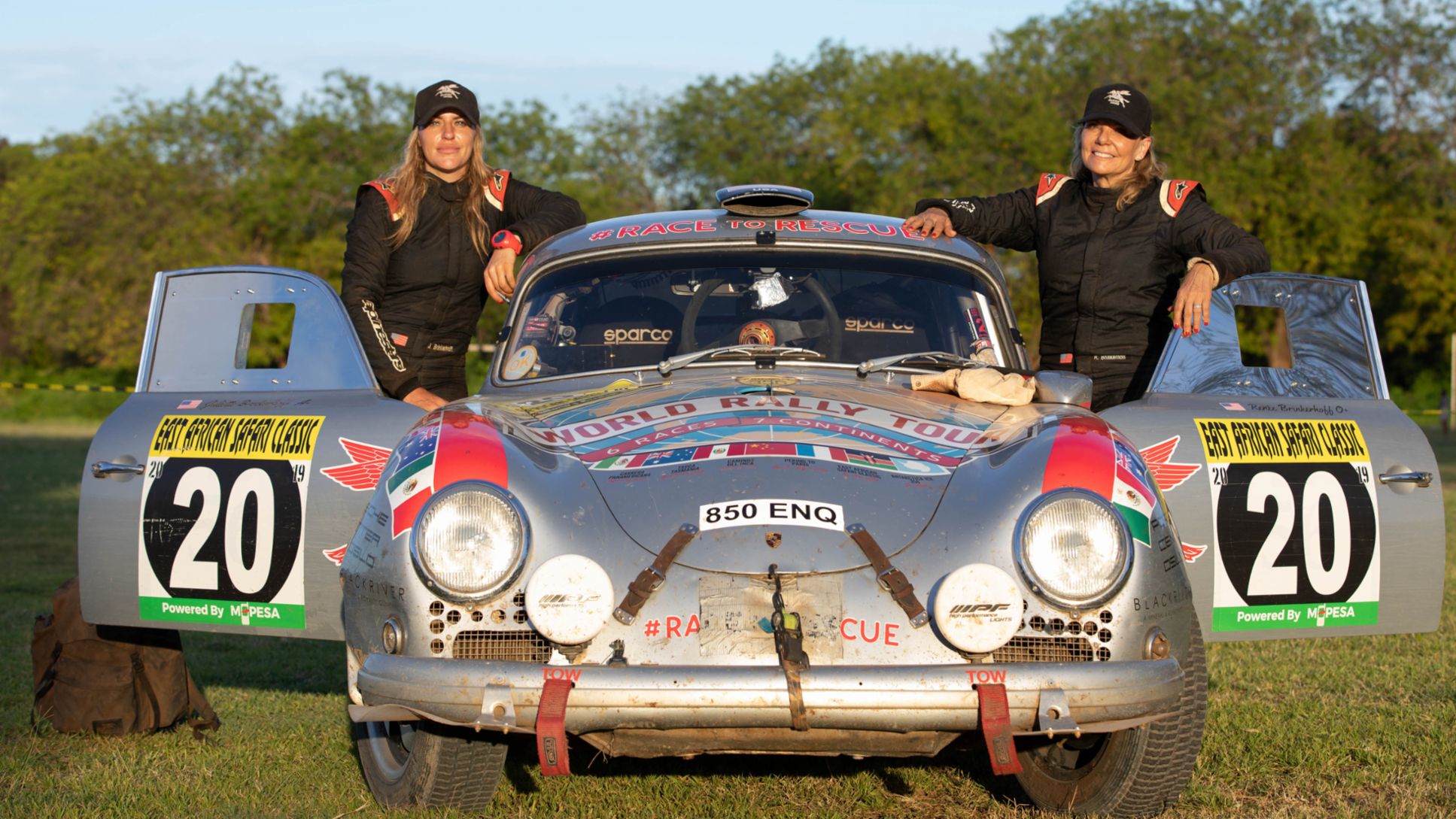 Behind the wheel of her faithful 1956 Porsche 356 A, Renée Brinkerhoff is preparing for the final stage of her Project 356 World Rally Tour. And when Renée says “world” she isn’t being hyperbolic. So far, she has raced across six different continents, all while raising awareness for her charity to fight child trafficking. This (northern) winter, she will take on what could be her toughest challenge yet, taking her Porsche where none other has driven before – Antarctica.

For most of her life, nothing pointed toward the Colorado-based mother-of-four embarking on a global racing adventure. In fact, it wasn’t until Brinkerhoff was folding clothes in her laundry room one day, that a little voice at the back of her head began saying “I’m going to race a car”. The car of choice became apparent the first time she laid eyes on a small, German sports coupé her husband’s cousin had purchased for restoration.

“We went over there and it was a 356. I’d never seen one before, and this happened during the time when I realised I was going racing,” Brinkerhoff says. “I just fell in love with it and I thought that’s the car I want.” Shortly afterwards, the same cousin helped source what would become her automotive companion. “I didn’t even look at another car,” she remembers. “When I saw that one, I knew it was the car.”

She purchased her 356 in 2011, and she hasn’t looked back since. In 2012, she visited the gruelling Mexican road rally, La Carrera Panamericana, for the first time, and drove part of the race for a team that had entered a Porsche 356. It proved enough of an appetiser for Brinkerhoff to return the following year to drive the entire rally herself.

Brinkerhoff’s 356 started undergoing a transformation to meet regulations and maximise the car’s potential in the “Sport Menor” class. This included custom shocks and engine, a roll cage, fuel cell and more. Later on, the gearbox was also changed from a four-speed to a five-speed to better cope with the altitude encountered in some of the worldwide rallies. But it wasn’t just the car that needed preparing.

“You have to learn how to drive, right?” she smiles. “How do you drive a racing car?” To help build her skills, Brinkerhoff attended classes at the Porsche Track Experience where she had the Chief Driving Instructor – and America’s most decorated endurance racer – Hurley Haywood in the passenger seat. “He kept me out there and kept taking me around the track, and that was such a confidence booster.”

Not your average racing debut

In 2013, at the age of 57, Brinkerhoff once again arrived at La Carrera Panamericana – this time to compete in her own car. The famed rally has strong roots in Porsche history as it happens to be the namesake of not one, but two models – the Carrera and Panamera – commemorating the brand’s major successes with the 550 Spyder in the early days of the race.

Brinkerhoff embarked on the 2,000-mile journey in a challenging position, having not even had a chance to test her 356, as it had been in development right up until the main event. Even so, after seven days at full throttle across Mexico, she became the first woman ever to win her class. Never having planned to compete in more than one race, Brinkerhoff found herself back in Mexico in 2014, this time finishing second in her class but with an impressive 14th place overall.

The following year marked her first time competing under the new team banner, Valkyrie Racing – named after the women in Norse mythology who would bring fallen warriors to Valhalla. This year would also see Brinkerhoff encountering her biggest scare yet.

“We could have not come home. We could have gone over that cliff,” she reflects on a moment when La Carrera Panamericana showed why it has earned a fierce reputation.

Driving on what later turned out to be tyres overinflated by 20 psi, Brinkerhoff struck a guardrail after executing an emergency manouevre to avoid hitting a crowd of bystanders, badly damaging the car in the process. Although she made it back on the road with parts from a helpful local Porsche collector, this would be the beginning of a year off for Valkyrie Racing – only for them to return later on a mission.

Taking on the world

In the time after the accident, two key decisions were inspired by what Brinkerhoff describes as an organic series of events. Firstly, the racing team grew a philanthropic branch, Valkyrie Gives, to aid women and children at risk, with a special focus on ending child trafficking. Secondly, a massive undertaking started shaping up as the Project 356 World Rally Tour.

Brinkerhoff had scoped out six races on all seven continents to challenge herself and raise awareness for the new charity. As the scale of the adventure grew, the UK-based rally experts at Tuthill Porsche joined in to prepare the car, and in 2017, she was back at La Carrera Panamericana.

This time, she fared better than her last race in Mexico, once again winning her class and kicking off the World Tour in style. Brinkerhoff proceeded to put the pedal to the metal in 2018, first traveling down under to the Targa Tasmania in Oceania, then rising to 15,000 feet in the Andes Mountains during the Caminos Del Inca to check off South America. The next year, she hit two birds with one stone as she drove for 36 days and 9,300 miles across Asia and Europe in the Peking to Paris rally, but the marathon was not without its hurdles.

Mechanical failure meant that a new engine had to be flown in, and with tenacity and some creative shipping methods, it arrived in St. Petersburg – disassembled and in four different suitcases. Rounding out the decade, Brinkerhoff tackled the East African Safari Classic Rally during its rainiest season in 40 years.

Valkyrie Racing crossed the finish line in Africa as the only female-driven team. This has been the case in several races, and along with her philanthropic work, it is a factor of great motivation for Brinkerhoff. She recalls pulling in to be met by cheering crowds of all ages, where the women would thank her for being an inspiration. “More than being on the podium, that whole team experience and having the ability to affect positive change in people’s lives and go out and be a motivation to them – that to me has been the most rewarding,” she says.

Determined to continue her work for Valkyries Gives, which has raised nearly $200,000 since its inception, Brinkerhoff is now looking to fulfil the inherent promise in the name of the Project 356 World Rally Tour. This means approaching the final frontier of the seven continents. There will be no cheering crowds, no competitors but herself and the terrain, and no precedence whatsoever when Brinkerhoff arrives in Antarctica in January 2021. Valkyrie Racing is venturing into the unknown.

The goal for success is set by Brinkerhoff and poses a challenge suitable for her ambitious personality: 356 miles – of course – across the toughest conditions imaginable while also attempting a land speed record.

“We’re not preparing. We can’t prepare,” she laughs, alluding to the fact that nothing can truly simulate the surprises of Antarctica. Still, “the preparation is anticipation” as she says, so she has practiced ice driving to hone her skills, and made sure to surround herself with the best possible crew.

In fact, when she was interviewing Jason De Carteret – who has set world records for both skiing and vehicular polar exploration – she quickly realised that he was in fact interviewing her, assessing whether or not she would be up for the polar risk and dangers. The answer was yes.

Meanwhile, the Porsche from 1956 – manufactured the year Brinkerhoff was born – is undergoing another necessary transformation. Among the changes, the installation of a crevasse bar will stop the car from falling down if it hits a large crack in the ice. It will also be running on skis and tracks instead of the familiar four wheels, and it will be wrapped in bright red because the silver paint essentially becomes invisible in the snow and ice, rendering filming and photography impossible.

Weight is also a key element in driving over ice rather than sinking through it, and, for instance, the heater has been removed from the car – not that it would be much of a match for Arctic temperatures anyway. Finally, the team is preparing measures of sustainability, such as solar panels on the crevasse bar, and using carbon offsetting to ensure the entire Project 356 World Rally Tour is carbon neutral.

As if racing a vintage car didn’t pose enough obstacles in itself, there was one bump on the road no one could have foreseen – the coronavirus crisis, which has thrown a wrench in the planning, particularly when it comes to parts supply and shipping logistics. Brinkerhoff is still confident that Valkyrie Racing will make it to Antarctica in January, in the slim window when the ice is stable, in order to take on the final stage of the world tour.

Only time will tell what the future holds after the quest of the seven continents has been completed, but one thing’s for sure: Renée Brinkerhoff is a racer of determination, so you know there are many more miles ahead. As she says, with a wry smile: “I’m not finished quite yet.”